Accessibility links
Can Widespread Mask Use Prevent Lockdowns Where The Virus Is Surging? : Shots - Health News How can communities stop coronavirus case surges without crushing the economy? Some scientists say widespread mask wearing may be more than a helpful precaution — it may be the solution. 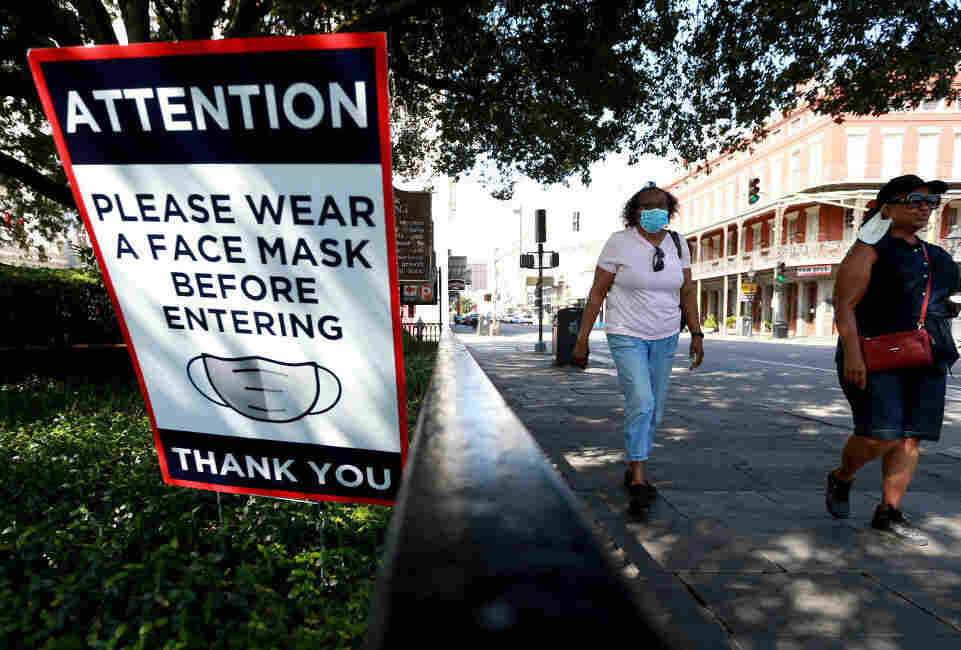 Scientists estimate that near-universal mask use could make a major difference in bringing down coronavirus infections in the United States. Sean Gardner/Getty Images hide caption 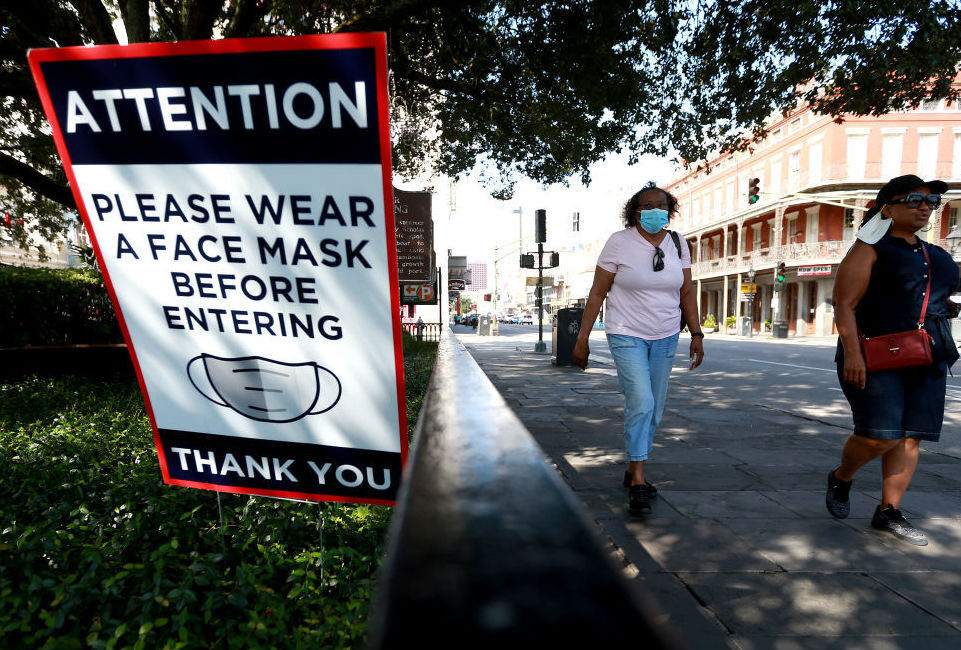 Scientists estimate that near-universal mask use could make a major difference in bringing down coronavirus infections in the United States.

The American conversation around masks and COVID-19 has taken a dizzying turn. For months, wearing masks has been politicized as a sign of liberal leanings. But in recent days, ever more governors — many of them Republican — have moved to mandate masks. This week President Trump — arguably the nation's most visible mask un-enthusiast — started referring to wearing them as "patriotic."

Now prominent scientists are proposing a radical — and hopeful — possibility: Even as coronavirus cases spiral upward across the United States to levels surpassing this spring's surge, these experts argue that if Americans start wearing masks en masse, the U.S. may yet avoid a return to lockdown measures.

"Look, we've never tried to use masks as our primary strategy when outbreaks are this bad," says Ashish Jha, director of the Harvard Global Health Institute. "But I do believe that if we want to avoid a complete lockdown, we've got to at least give it a shot."

It's worth stressing what a leap this idea represents from earlier discussions of masks as just one of many commonsense precautions that people could and should take.

But when it comes to masks as all-but-panacea, what is the scientific evidence? Here's a primer.

It seems obvious that masks would reduce the spread of a respiratory bug like the coronavirus to at least some degree. After all, when a healthy person wears a mask, the barrier filters out some airborne droplets containing the virus. Even more importantly, when a sick person wears a mask, the barrier holds in many of the viral droplets they exhale.

These include analyses from China, Germany and states within the United States.

Ali Mokdad is on a research team that has tried to make sense of a large number of these studies. Mokdad and colleagues with the University of Washington's Institute for Health Metrics and Evaluation did what's called a meta-analysis.

"You take every study that has been published on the protective effect of masks, and then you reanalyze all the data," says Mokdad.

Their bottom-line estimate: If 95% of people wear cloth masks when they're out and about interacting with other people, it reduces transmission by at least 30%. In other words, each infected person will go on to infect 30% fewer people.

Mokdad stresses that this is a conservative finding. It uses the lower bound within the range of estimates. And it assumes all the masks are cloth rather than surgical masks or N95 respirators, which are even more effective. "Widespread mask [use] could be even more powerful," says Mokdad, because some portion of people would likely be using those more protective versions.

Yet even with a 30% reduction in transmission, the cumulative impact on a community can be massive. To understand why, it helps to consider some math: The coronavirus spreads exponentially. For example, let's say in a place where no one is wearing masks, each infected person is currently passing the virus to 1.03 others. This means 100 infected people will go on to infect 103 others, who in turn infect 106 others, who infect 109 and so on. The result is that in, say, seven five-day cycles of infection, a total of 889 people will have contracted the virus.

But if you curb the transmission rate by 30%, this means that instead of infecting 1.03 others, each infected person passes the virus on to only 0.72 others. So now 100 infected people go on to infect only 72 people. These 72 go on to infect just 52 people in the next cycle. By the seventh cycle, only 10 new people are infected, and only a total of 332 people have contracted the virus altogether. Essentially, instead of exponential growth you've triggered what's called exponential decay.

To see how this would translate for the entire U.S. population, Mokdad's team at IHME ran a simulation. Based on the pandemic's current trajectory through the U.S., they forecast that by Nov. 1, nearly 80,000 more people will die from COVID-19. But if Americans ramp up from their current level of mask use to 95% use, about 34,000 of those deaths could be avoided, says Mokdad.

An alternative to lockdowns

It gets better. Mokdad's team estimates that communities where the virus is now surging out of control could still avoid economy-killing lockdowns if they would massively increase mask use.

Here's how they figure this. Based on the U.S. experience this past spring, Mokdad's team estimates there's a point at which local or state health officials will feel they have no choice but to reimpose lockdowns, in spite of the economic and political consequences. That point, they estimate, is when the number of daily deaths tops eight per million people.

Texas is one month from hitting this threshold, according to IHME's current forecast. But if 95% of residents there started wearing masks right now, IHME forecasts that Texas would bend its curve enough to remain under the threshold and could avoid a lockdown.

"There is a lot of hope here," says Mokdad.

Harvard's Jha may seem an unlikely candidate to second that view. He helped build a rating tool for counties and states to determine when the coronavirus is spreading so widely that the only way to get a handle on it is to revert to stay-at-home mode. (His group's tool is based on a different metric for out-of-control outbreaks: 25 new daily cases per 100,000.) And right now the tool is showing 11 states in that red zone and another 20 one notch below in the orange zone.

And yet, Jha says, "If you look at the hottest of the hot spots in America — Arizona, Texas, Florida, South Carolina — can they avoid a full shelter in place? With masks, I think there may be a window."

As for those states with slightly lower but still relatively high levels of transmission, universal masking could make it possible to keep up a fairly robust range of activities. Drinking and eating at indoor bars and restaurants would be too dangerous, he says.

But, says Jha, "I think if you're wearing masks, you probably can get some number of people back into offices. You probably can't go back to the original level of office occupancy. But you can start getting some people back in, especially if you can improve ventilation." The same applies to nonessential retail businesses and even, he says, schools — especially middle and high school, where not just teachers but students could likely wear masks.

"There is no single thing that gets us everything we want," says Jha. "But universal masking is a really critical part of letting us get, like, 80% of our lives back."

At a news conference last week, Adm. Brett Giroir, assistant secretary for health at the Department of Health and Human Services, also endorsed that view. If the worst hot spots close indoor bars, limit indoor dining to 25% capacity and increase mask use to around 90%, "with these simple measures, our models say that's really as good as shutting down," said Giroir. "These simple [acts] can really shut down the outbreak without completely shutting down your local area."

Can Americans get to near-universal mask use?

Of course the operative word in universal-masking strategies is "universal." Is it conceivable that so many Americans would adopt the practice?

IHME's analysis also suggests that even without mandates, across the U.S. once coronavirus cases start to rise, people start to ramp up mask wearing and social distancing of their own accord. (In fact, in Arizona, where officials have not mandated comprehensive stay-at-home orders despite daily death counts that have surpassed the eight-per-million threshold, IHME projects the infection curve will soon go down largely because of voluntary actions by residents.) When it comes to social distancing, there is evidence that once it is mandated, people tend to practice it to an even greater degree. So it's possible that the recent move toward mandatory masking in many states will have that effect as well.

What You Need To Know About Protective Face Masks

Still, Mokdad notes that the U.S. has a long way to go to reach 95% masking. His best estimate is that nationwide about 40% of people are regularly wearing masks. And in some hot spots, the figure is closer to 20%.

But are masks alone really enough?

Natalie Dean, a biostatistician at the University of Florida, says she's wary of focusing too heavily on masks.

For one thing, Dean is leery of the studies comparing outcomes in mask-wearing and non-mask-wearing settings. "I find those types of before-and-after studies a bit hard to interpret, just because usually there is a lot else going on at the same time," she says.

Indeed, it's worth noting that while many countries in Asia with high mask use have managed to keep the virus controlled, two countries in South America where mask use was also high in some parts — Chile and Brazil — have seen raging outbreaks. Mokdad says one reason may be that those countries are in the Southern Hemisphere, so their outbreaks coincided with cold weather, which seems to correlate with higher transmission of the virus. But if true, that could diminish the benefit that mask wearing could have in the U.S. come autumn.

Furthermore, says Dean, even if you could accurately tease out the effect of mask use, applying that information to simulations of how the outbreak might progress is fraught.

"If we've seen anything with modeling, it's that human behavior is so complicated that things change very quickly," says Dean. "So our ability to predict the impact of any particular element is really tricky."

This isn't to say that Dean doesn't support widespread use of masks. She says she thinks they could be very useful. But, she says, the key is not to portray masks as a "silver bullet" solution rather than emphasizing all the other types of precautions that communities need to be following, including social distancing, hand hygiene, better testing, contact tracing and isolation of infectious people.

The problem with the universal-masking strategy is "the idea that if we just did this one thing perfectly, that we would be fine," says Dean. "I think the real solution is going to be doing a lot of things OK."