Accessibility links
Researchers Figure Out How To Genetically Alter Squid : Shots - Health News Scientists have modified the genes of a squid, and genetically altered octopuses could be coming soon. 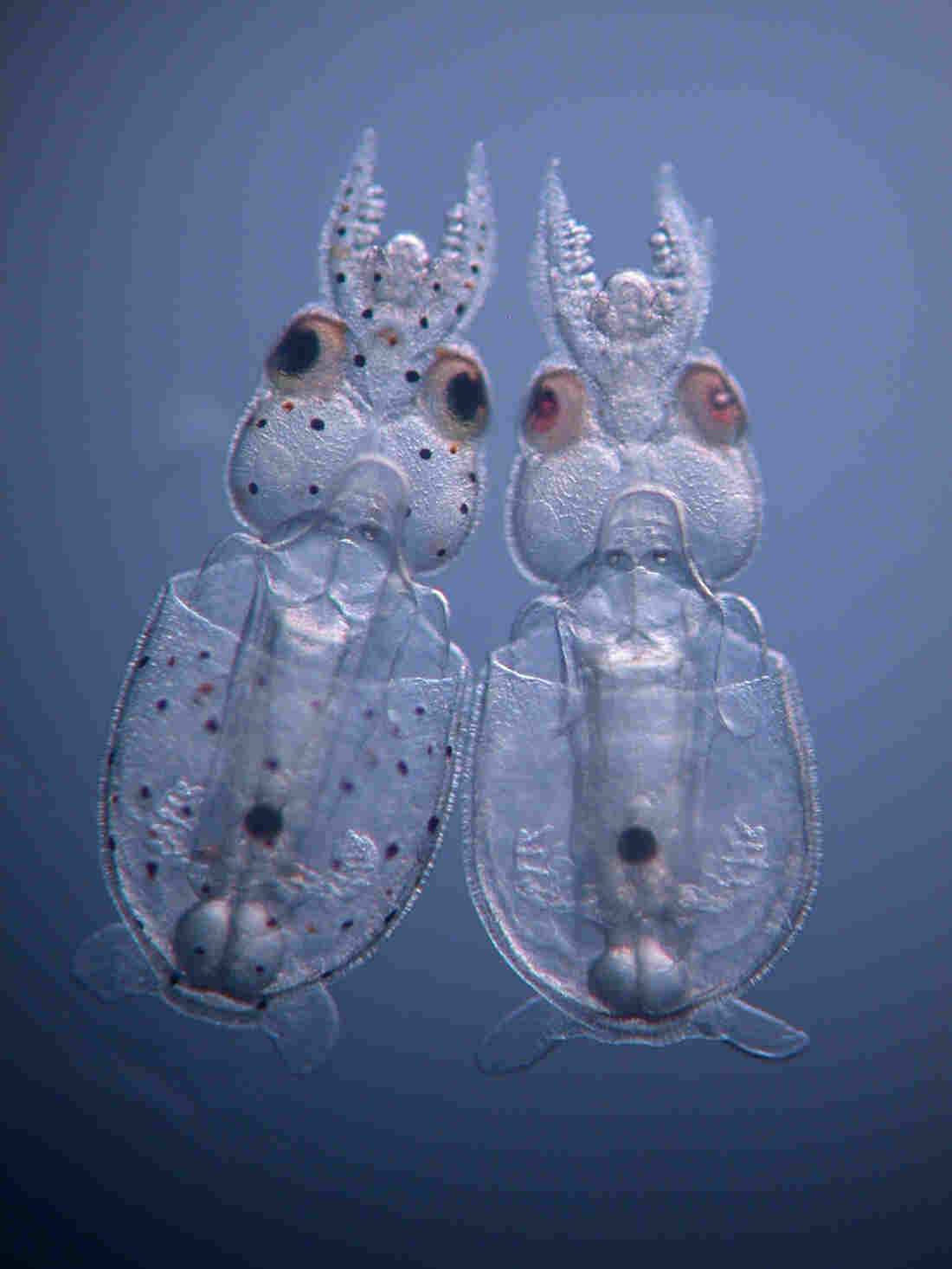 On the left is an unmodified hatchling of a longfin inshore squid (Doryteuthis pealeii). The one on the right was injected with CRISPR-Cas9 targeting a pigmentation gene before the first cell division. It has very few pigmented cells and lighter eyes. Karen Crawford hide caption 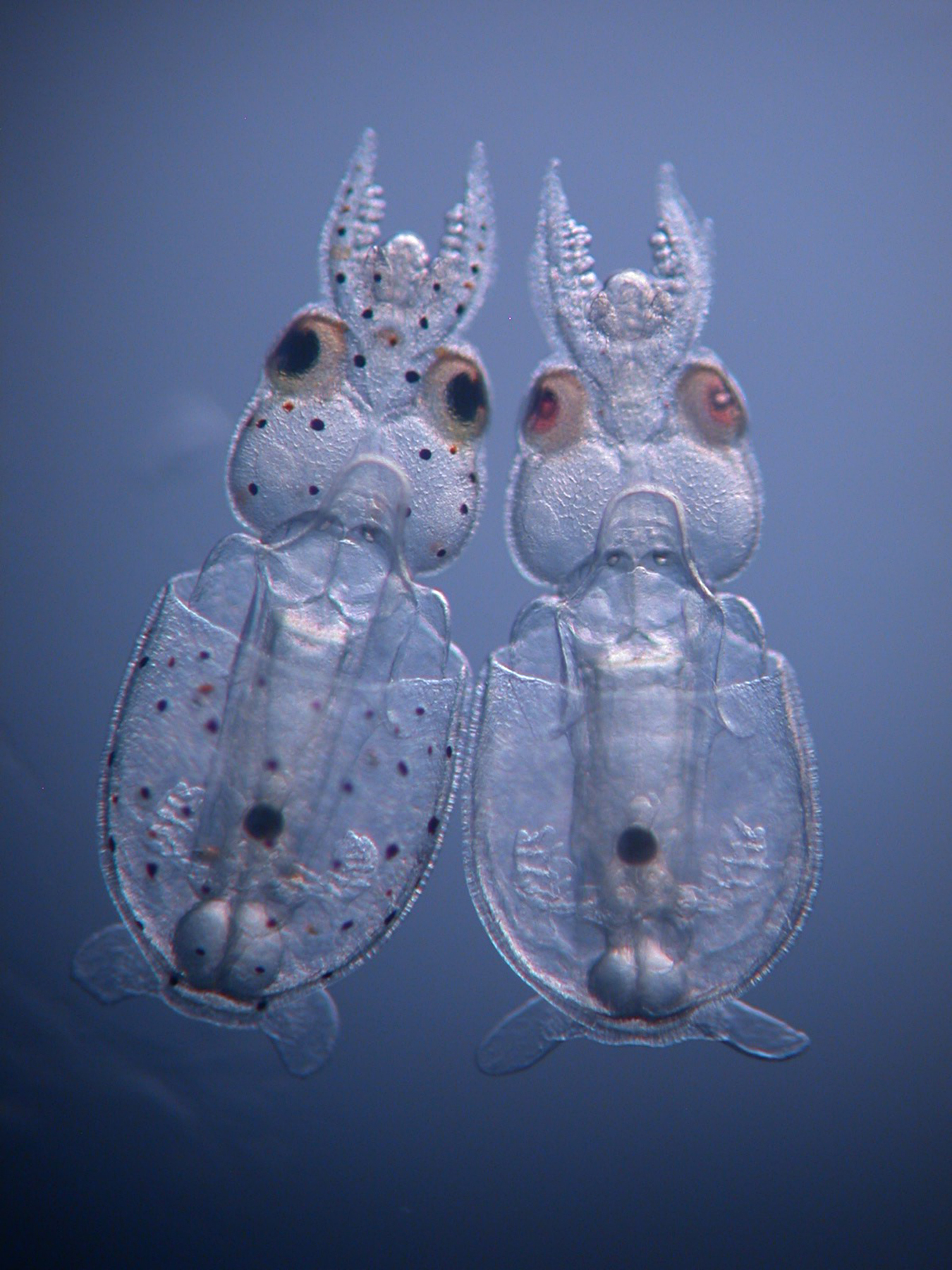 On the left is an unmodified hatchling of a longfin inshore squid (Doryteuthis pealeii). The one on the right was injected with CRISPR-Cas9 targeting a pigmentation gene before the first cell division. It has very few pigmented cells and lighter eyes.

The first genetically altered squid has scientists excited about a potential new way to study marine critters that are so weird, they've sometimes been compared to alien life forms.

Scientists report this week that they have disabled a pigmentation gene in a squid called Doryteuthis pealeii. Their success shows that cephalopods — which include squid and octopuses — can finally be studied using the same kind of genetic tools that have let scientists explore the biology of more familiar lab animals like mice and fruit flies. Those are easy to keep in the laboratory, and scientists routinely modify their genes to get insights into behavior, diseases, and possible treatments.

Cephalopods may seem plenty strange enough without scientists tinkering with their genes. These tentacled beings have huge, clever brains that look nothing like our own. They travel using jet propulsion and some can change their skin color in a flash. All of this oddness is exactly why some biologists want to better understand them.

"They've evolved these big brains and this behavioral sophistication completely independently," says Joshua Rosenthal, a researcher at the Marine Biological Laboratory in Woods Hole, Massachusetts. "This provides an opportunity to compare them with us and see what elements are in common, and what elements are unique."

Until now, cephalopod research has been hindered by the fact that there's been no way to manipulate squid or octopus genes. Rosenthal is part of a group that's trying to change all that. The team is raising a wide array of exotic cephalopod species — everything from flamboyant cuttlefish to pygmy octopuses — to figure out how to keep them going in captivity and alter their DNA.

The researchers also work with a famous local squid that lives in the waters around Woods Hole. Historically, this squid has been important for neurobiologists because it has a giant, easy-to-study nerve cell. Much of what's known about how nerve cells send electrical signals comes from studies of this cell, and the research led to a Nobel prize in 1963. What's more, scientists have sequenced the DNA that makes up this squid's genetic code.

Each summer, a research boat goes out from Woods Hole and collects the squid, Doryteuthis pealeii. Karen Crawford of St. Mary's College of Maryland, a key member of the research team, had previously figured out how to take sperm and eggs from this squid and produce embryos in the lab. 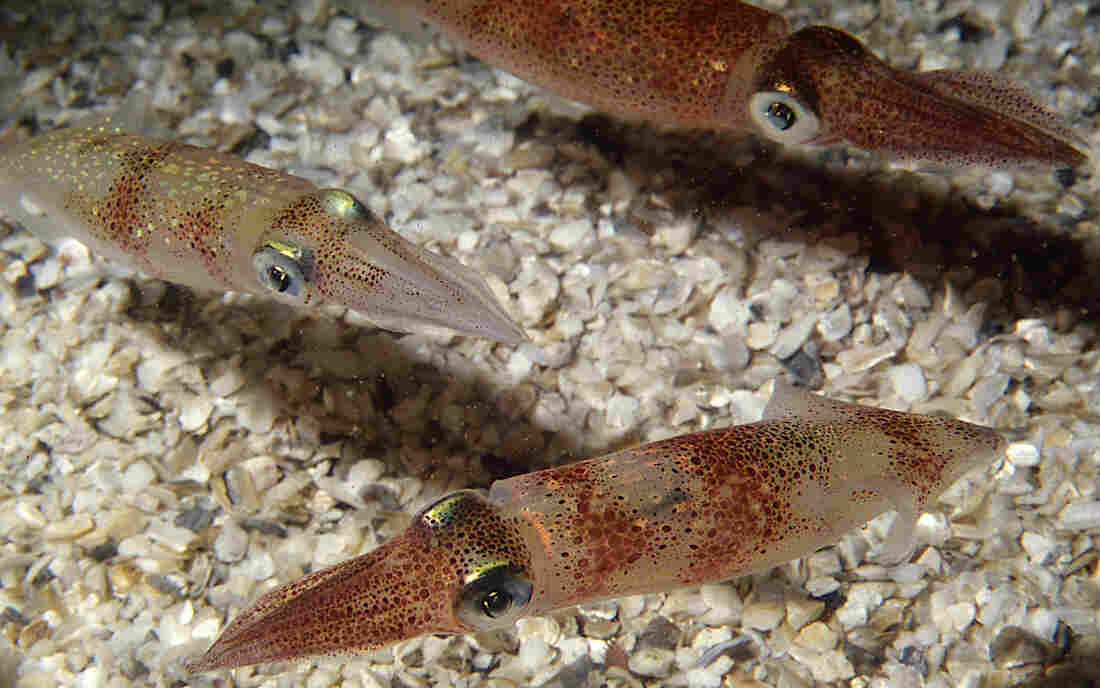 Studies with the Doryteuthis pealeii squid, shown above, have led to major advances in neurobiology. Roger T. Hanlon/https://urldefense.com/v3/__http://www.mbl.edu/bell/current-faculty/hanlon/__;!!Iwwt!H-aZ0DdVKT2OS-TEIa9IsOvxvuEktUdwshjTdJhh5g48qJLH73UcTuVBJdN_$ hide caption 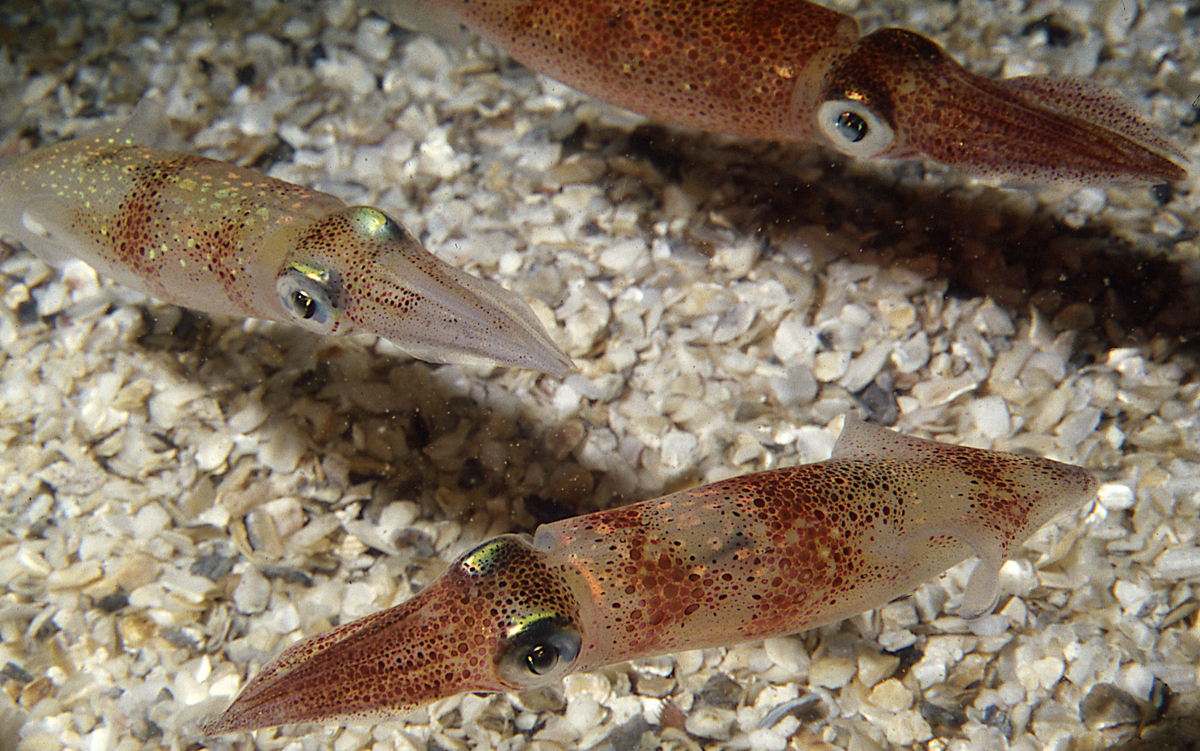 Studies with the Doryteuthis pealeii squid, shown above, have led to major advances in neurobiology.

Building upon that work, she and her colleagues figured out how to inject gene-altering materials into the fertilized egg, to disrupt a gene involved in coloring the squid's skin and eye cells. The biggest challenge was getting through a tough outer layer that surrounded the early squid embryo, says Rosenthal.

"For months, we would have needles break," he says. "So we came up with a way to get the injection needle in, finally. That turned out to be one of the biggest roadblocks in this study."

The resulting squid hatchlings had far fewer of the little dark spots that are normally characteristic of the species, because the pigmentation gene was knocked out in almost every cell.

"For me, this is game-changing. I have been interested in trying to understand how these animals work from the molecular level, and so now we actually have the ability to go in and test what an individual gene does," says Carrie Albertin, another member of the research team who also works at the Marine Biological Laboratory.

"This is something that honestly, if you asked me five years ago if we'd be able to do, I would have just giggled and said, 'I dream of it.' But, you know, I didn't think it would be possible. And yet here we are," says Albertin. 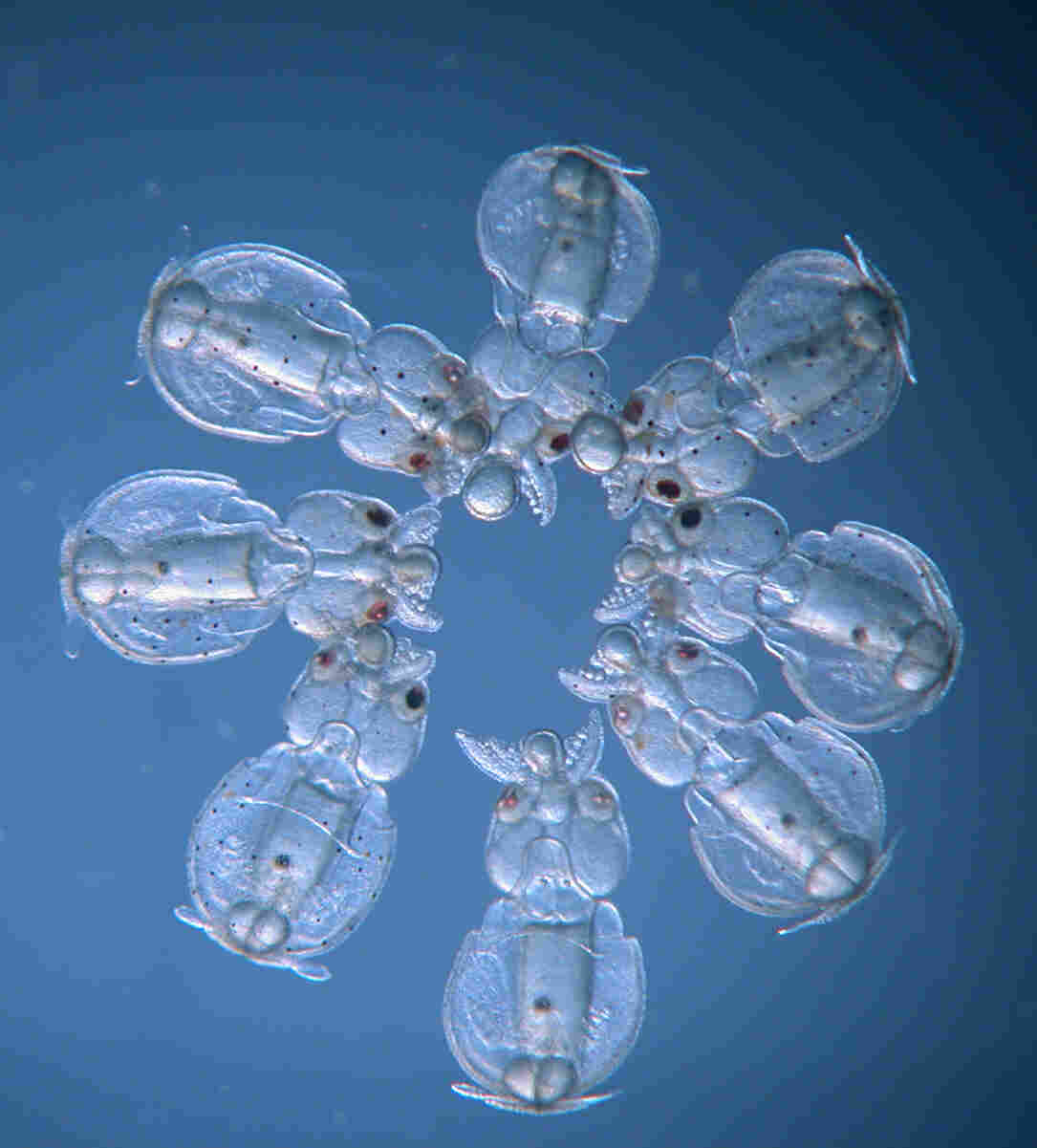 This particular squid species isn't amenable to being raised to maturity in the lab — it's just too big. But there are plenty of other, smaller squid and octopus species, and the team is already working to transfer the technology to the ones they're cultivating in captivity. The researchers are also looking to add in genes, rather than just knocking out existing ones.

The work has thrilled other squid biologists like Sarah McAnulty of the University of Connecticut. She's studied the Hawaiian bobtail squid, and says researchers have tried to genetically alter cephalopods in the past.

"It's incredibly impressive that they've gotten it to work and this is a huge advancement for cephalopod researchers all over the world," says McAnulty. "We should all be popping bottles of champagne. This is amazing." 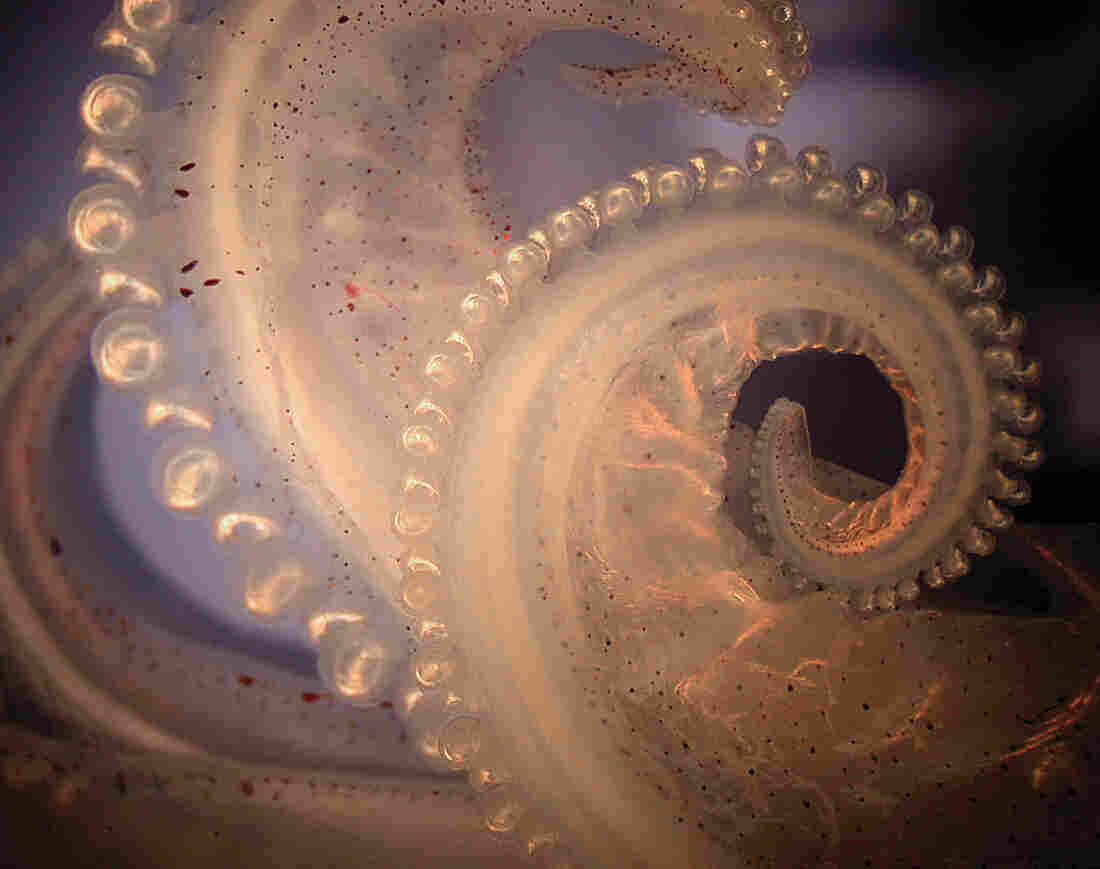 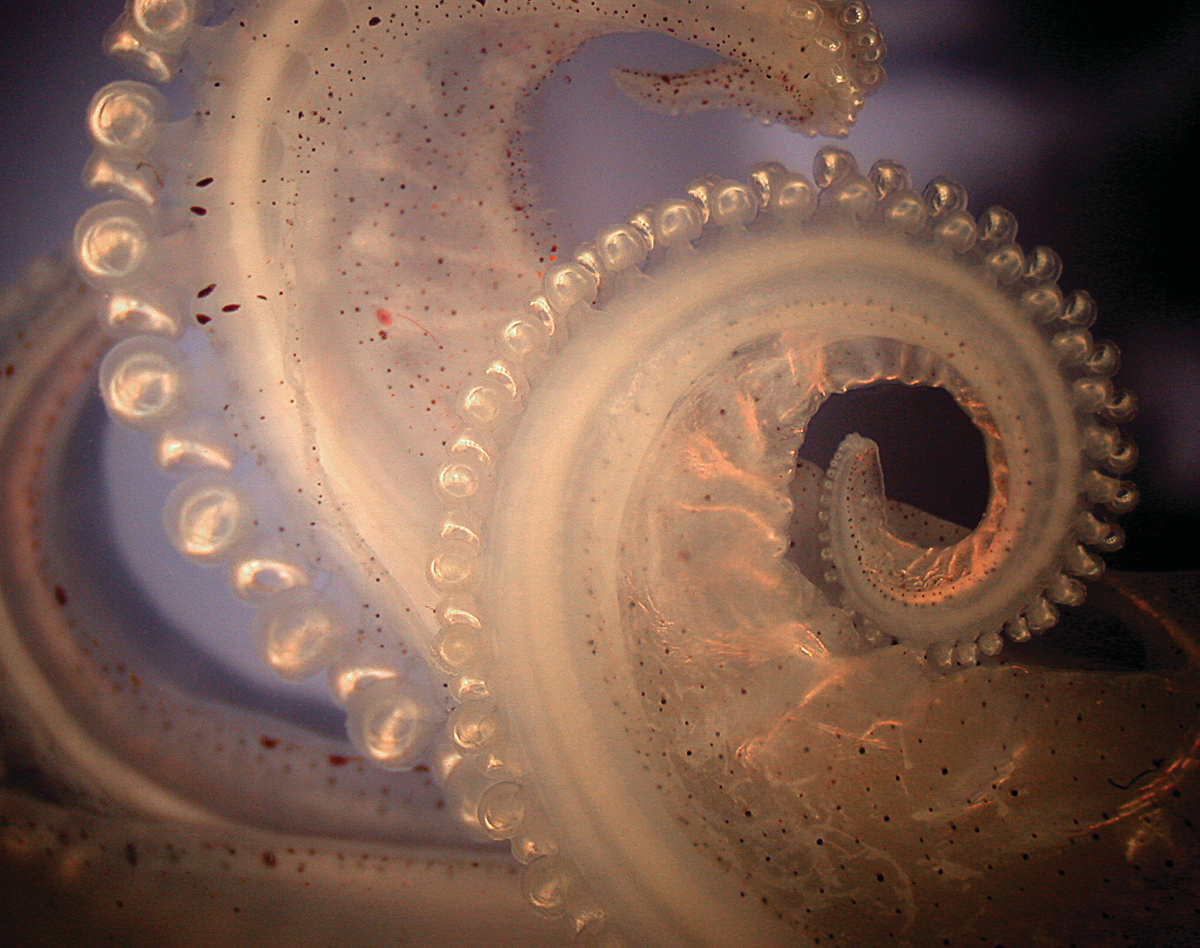 When biologists study natural squid, eventually they "hit something of a wall of understanding," because they can't play around with the animal's genetics to explore how its systems work at the most basic level, says McAnulty. She believes the ability to genetically modify cephalopods should make all kinds of novel experiments possible.

"If I could do anything, I would totally start playing around with the immune system of the squid," says McAnulty, to try to figure out how, say, the Hawaiian bobtail squid knows not to attack a kind of glowing, symbiotic bacteria that lives inside it.