Accessibility links
A Key Ingredient For Making A COVID-19 Vaccine Work : Shots - Health News Adjuvants play a crucial role in many vaccines' effectiveness. Some scientists say there needs to be more research into developing a wider variety of adjuvants because of how important they are. 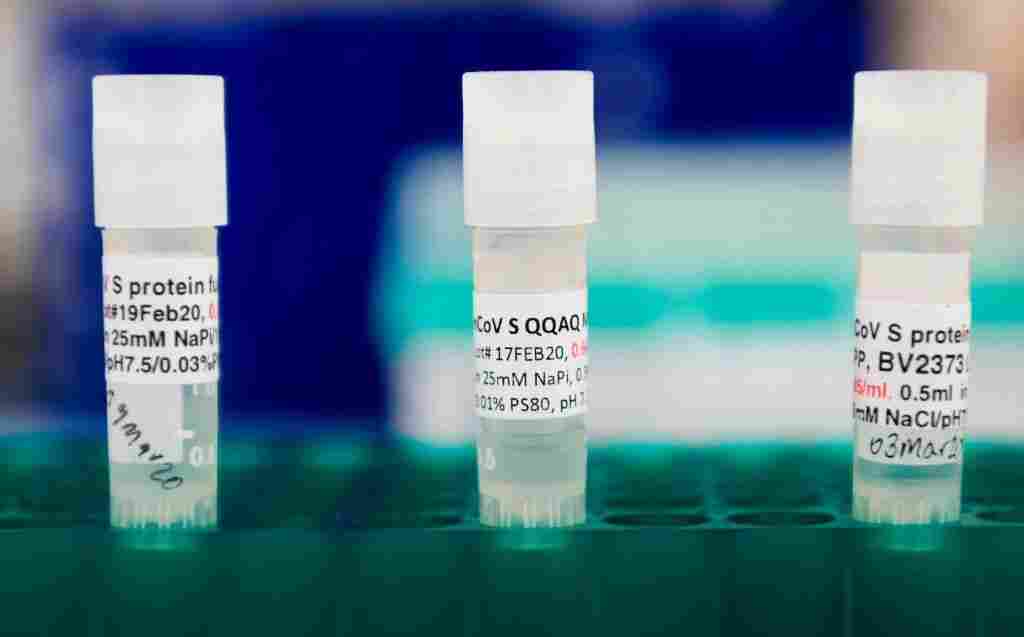 Potential COVID-19 vaccines are kept in a tray at Novavax labs in Maryland on March 20. The Novavax vaccine requires an immune-boosting ingredient called an adjuvant to be effective. Andrew Caballero-Reynolds/AFP via Getty Images hide caption 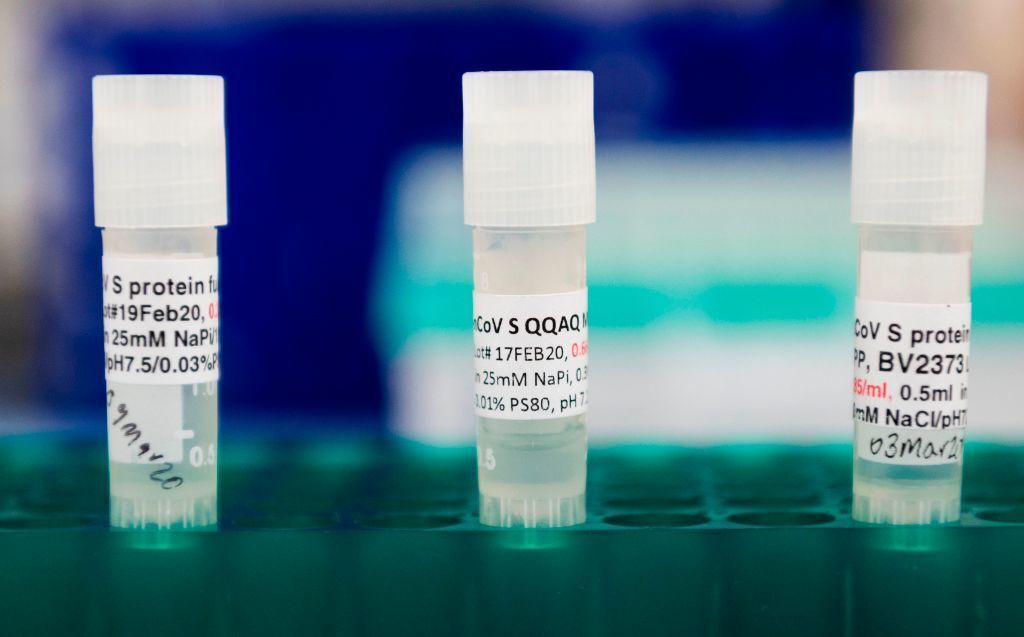 Potential COVID-19 vaccines are kept in a tray at Novavax labs in Maryland on March 20. The Novavax vaccine requires an immune-boosting ingredient called an adjuvant to be effective.

There are many approaches to making a vaccine against COVID-19. Some use genetic material from the coronavirus, some use synthetic proteins that mimic viral proteins and some use disabled versions of the virus itself.

But before any of these approaches can generate the antibodies to the coronavirus that scientists say are essential to protecting people from getting sick, the immune system has to be primed to make those antibodies.

That's the job of something called an adjuvant.

"The definition of [an] adjuvant is something you add to enhance, in the case of immunity, the immune response," says Gregory Glenn, president of research and development at Novavax, one of the companies that has received money from Operation Warp Speed.

Vaccines essentially trick the body into making an immune response to a specific virus or bacterium, so if something dangerous comes along, the immune system will be prepared.

But before it can prompt a response to a specific virus, the immune system has to be made ready.

"When you inject a vaccine, the first immune cell that's of importance is a dendritic cell," Glenn says.

Dendritic cells are part of what's called the innate immune response. These cells will respond to anything foreign that enters the body, the coronavirus included.

"If they see something — they see a virus or bacteria — they become highly activated, and then they create a whole cascade of events," Glenn says.

That cascade leads to the production of antibodies, and it's the antibodies that will recognize the specific virus of interest.

Novavax's testing shows an adjuvant is critical to its vaccine working well. That's the case for many vaccines.

But the strange thing is that there aren't a lot of adjuvants out there.

"We only think about adjuvants when there's a dire need, such as this pandemic, for example," says Bali Pulendran, a vaccine developer at Stanford University. "Now everyone is interested in faster response and a better response and a longer-lasting response."

Pulendran says for almost a century, scientists relied on a compound called alum to act as an adjuvant. It was only in the 1990s that new adjuvants started appearing on the scene. Now there are several more options, but Pulendran says more choices are needed.

"This is a topic that needs, deserves better attention," he says.

That's a sentiment Corey Casper totally agrees with. He's the CEO of the Infectious Disease Research Institute and a proselytizer for adjuvant research. Casper says to consider what happened when the pharmaceutical company GlaxoSmithKline added a powerful adjuvant to a shingles vaccine.

"It took a vaccine that had previously existed which was about 50% effective, and it made it 97% effective," Casper says. "Not just in all people but in the hardest-to-protect people, which are the elderly, who typically make poor immune responses."

Casper says the vaccine community has underestimated the importance of adjuvants. He even has data suggesting that adjuvants alone might be capable of preventing infectious disease. That has enormous implications.

"Every time a new infection pops up, there's a race to develop a new vaccine for it," Casper says. "But what if you could give the adjuvant alone and you didn't have to develop a vaccine? That adjuvant could be stockpiled, it could be made at millions of doses, placed on the shelf, sitting there waiting for the next pandemic."

Sallie Permar, a vaccine researcher at Duke University, says there may be some validity to what Casper is proposing. She says scientists now have a better idea of how adjuvants work and how they might be able to prevent disease all by themselves.

But Permar says you have to be careful with adjuvants.

"There are some downsides to having such a strong adjuvant affect," she says

In the process of activating immune cells, adjuvants can also bring on some of the symptoms of disease, such as fever, malaise or inflammation. The GlaxoSmithKline shingles vaccine works well because of its adjuvant, but many people complain about unpleasant side effects.

One problem facing vaccine developers is the fact that many companies are reluctant to share their adjuvant technology.

"Adjuvants end up being very proprietary," says Barney Graham, deputy director at the Vaccine Research Center at the National Institute of Allergy and Infectious Diseases. "It's kind of the secret sauce of how to make your protein vaccine work."

Academic researchers are hoping the urgency of finding a successful vaccine against COVID-19 might make companies more willing to share.

"There is a whole science awaiting us in vaccines that lies in adjuvants," Permar says.

With so much attention being paid to vaccines now, that science may not be far off.