Accessibility links
IHME Model Projects Nearly 300,000 COVID-19 Deaths By December : Shots - Health News What's driving this death toll? Could anything improve the outlook? How reliable are these predictions anyway? We get into the weeds. 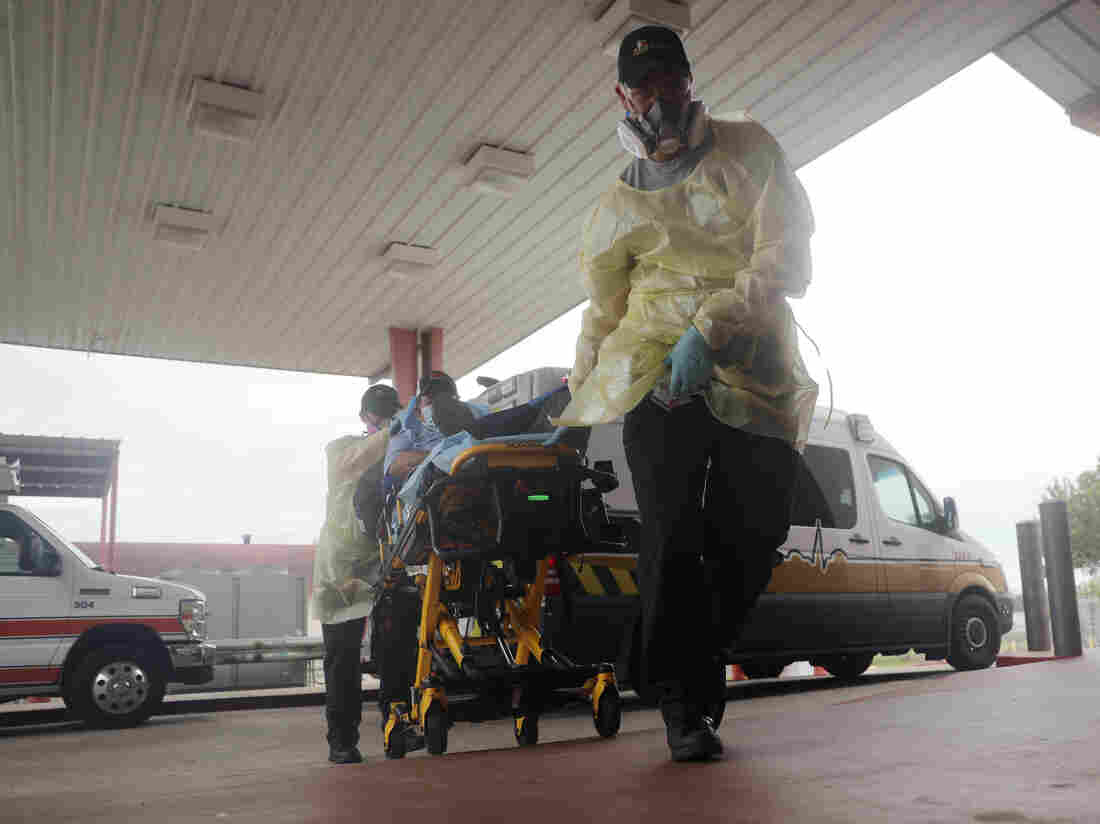 As coronavirus outbreaks continue to flare in the United States, modelers project that the country will hit nearly 300,000 deaths by Dec. 1. Eric Gay/AP hide caption 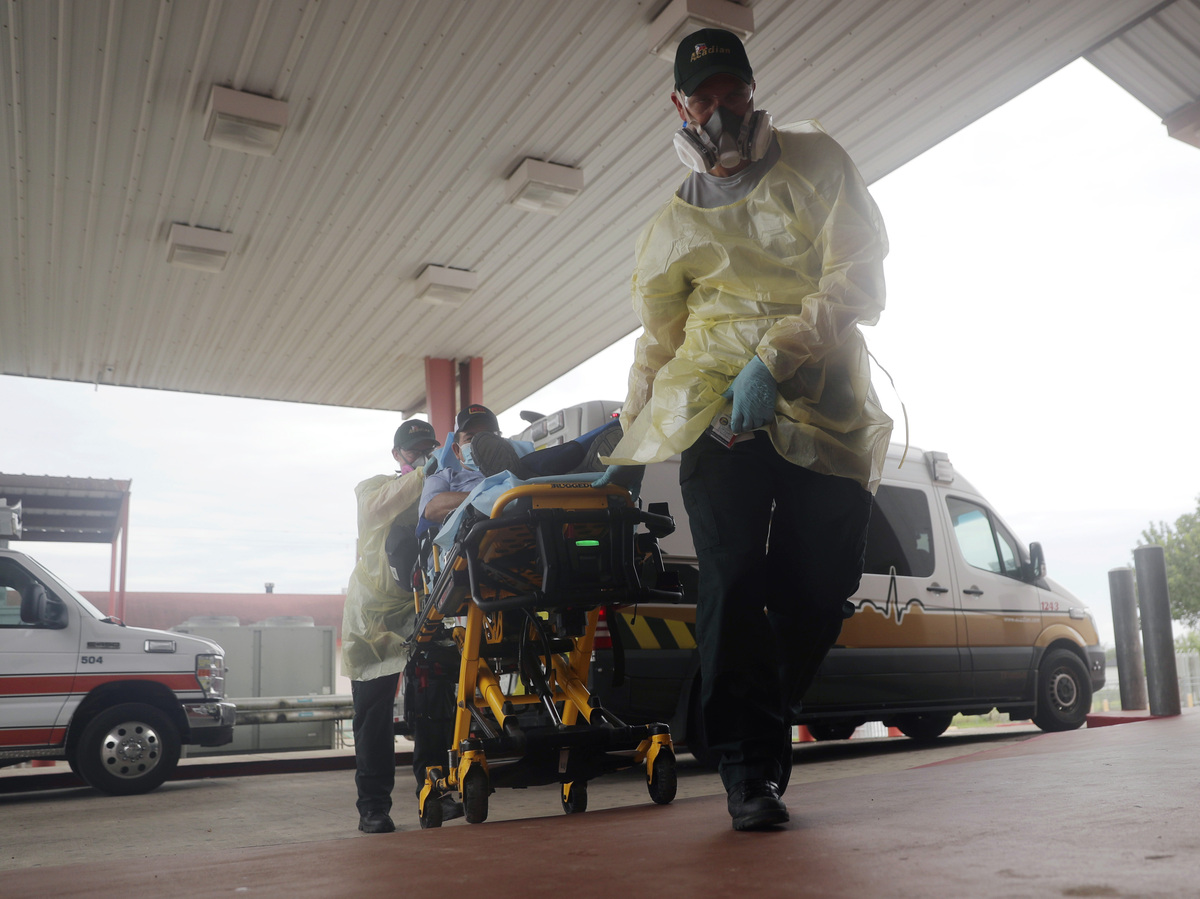 As coronavirus outbreaks continue to flare in the United States, modelers project that the country will hit nearly 300,000 deaths by Dec. 1.

By Dec. 1, the U.S. death toll from COVID-19 could reach nearly 300,000. That's the grim new projection from researchers at the University of Washington's Institute for Health Metrics and Evaluation — one of the more prominent teams modeling the pandemic. The new forecast, released Thursday, projects that between now and December, 137,000 people will die on top of the roughly 160,000 who have died so far.

NPR spoke with the head of IHME's team, Chris Murray, as well as with Nicholas Reich, of University of Massachusetts Amherst, who has set up a system for comparing 26 different U.S. forecasts.

Here are nine takeaways to help make sense of the projections:

1. The coronavirus is on track to be the third leading cause of death in the U.S.

To put the 300,000 projected death toll in context, it is more than four times the number of people who typically die from drug overdoses in the U.S. each year — and more than five times the number killed by the flu in a very bad year. In fact, if IHME's projection holds true, the coronavirus will likely be the third leading cause of death in the U.S. for 2020 — behind only heart disease and cancer — and a bigger killer than accidents, chronic lower respiratory diseases, stroke, and Alzheimer's disease.

2. The hardest-hit states probably won't bend their curves much

One reason the projection is so high, says Murray, is that the coronavirus is already spreading so widely across the United States. On the plus side, in some of the hardest-hit states such as Arizona, Florida and Texas, people have already modified their behavior enough to bend the curve. But while Murray estimates that daily new infections have now peaked there, he says: "We don't expect a sharp decline in those states. We expect that deaths will come down a little bit and then we will sort of see a slow, steady set of numbers there." This is due to a pattern his team has noticed when it comes to Americans' behavior ...

3. There could be a roller coaster effect

"The lesson that we're seeing in the experience in the big Southern states is that there is a behavioral response from individuals," says Murray. "When things get bad in their community, individuals are more likely to wear a mask, more likely to be cautious. And that helps put the brakes on transmission." But the flip side of that is that once there is an improvement in daily death tolls, people tend to ease up too quickly. "That creates this potential for [cases] going up, stabilizing, then coming down, [then] people becoming less vigilant, and then cases going up again," says Murray. "I think we will see more of that roller coaster phenomenon through the fall."

4. Starting in November, cold weather could turbocharge this cycle

In analyzing the pandemic's trajectory so far, IHME's researchers have found a tight correlation with the typical seasonal pattern of pneumonia infections in the United States. And that pattern is that, all things equal, when the weather is colder the virus appears to transmit more rapidly. This is a statistical analysis — so it doesn't explain the cause. For instance, it could be that when the weather turns cold, people spend more time indoors. Or it could be that the virus thrives in colder air. But whatever the reason, the impact is massive, according to Murray. For instance, in Northern states, says Murray, the analysis suggests "at the peak, which will be the first week of February, we would see approximately a 50% increase in transmission." And he says the effect will kick in starting in November.

5. Things could be worse than projected if hard-hit states don't return to lockdowns

IHME's projections are all the more sobering because they already factor in the likelihood that states will be taking major steps to curb rising cases. For instance, the forecast assumes 50% of American schools will be sticking to online-only instruction for the entire 2020-2021 school year. The forecast also assumes states will shut nonessential businesses and institute stay-at-home orders once their daily death counts get to the uncomfortably high metric of eight daily deaths per million residents. Four states — Arizona, Florida, Mississippi, South Carolina — have already passed that mark. Georgia and Texas are projected to reach it in September. By November, 16 states are projected to reach it.

Of course, it's far from certain that there's political will in many states to return to lockdowns. None of the states that have reached the threshold so far have gone into full stay-at-home mode. Currently "we see lots of evidence of reluctance to do that," says Murray. But he adds that for precisely that reason the team set the threshold for return to lockdown quite high. By comparison, back in the spring many states put their mandates in place when the daily death count reached just one per million.

6. Things might be better than projected if mask use takes off

One assumption the projection does not include is the prospect of rising use of masks. And this is where the picture gets more hopeful. Murray estimates that currently about 50% of people in the U.S. are wearing masks when they are out and about. The team then ran a simulation to see what would happen if starting today, that share was increased to 95% of Americans wearing masks. They found that this would cut the number of deaths by Dec. 1 almost in half — saving 66,000 lives.

But what would it take to get so many more Americans to start wearing masks? Murray says that based on an analysis of the data, tough mandates could really help. IHME's team estimates that when officials make masks mandatory, use increases by 8 percentage points. And when the mandates include penalties, there's a 15 percentage point bump.

7. Even with universal masking, many states may need to lock down

In the case of four states — California, Kentucky, Louisiana and Missouri — if 95% of the population started wearing masks, the state would no longer reach the IHME threshold for imposing stay-at-home orders by December. But for the remaining 18 states that are currently at or projected to reach the threshold by December, near universal mask use would only delay the point at which they reach it by an average of six to eight weeks.

8. New solutions could change the model

Murray says a challenge of the IHME model is that it is based on observation of what has happened so far. This makes it difficult to estimate the impact of approaches that haven't already been widely used in the U.S. "I do believe that as we get closer to the fall, absolutely the most important question for many states will be, 'Is there something that is less intrusive on people's ability to work and their lives that will still provide enough protection to avoid the death rate getting to a high level?' " Murray says.

For instance, he adds, "is it enough to have a mask mandate, bar closures, indoor-dining closures, businesses aligned on practices to try to keep their employees safe? And can we model out the effect of that versus the more draconian stay-at-home orders?" Similarly, he says, it will be a priority to estimate the impact of the patchwork of online and in-person instruction in schools and universities, as well as to determine how long lockdowns really need to be kept in place.

9. Not all forecasts are as pessimistic as IHME's

Nicholas Reich is a biostatistician at University of Massachusetts Amherst who has set up a system for making apples to apples comparison between 26 different national U.S. coronavirus forecasts. He notes that most of them are shorter-term forecasts — with only a handful projecting months ahead the way IHME's team does. Among these, IHME's predicted death total is the highest. For instance, researchers at Iowa State University are forecasting 236,000 deaths by Nov. 29 — 55,000 fewer deaths than IHME's forecast for that date.

Reich says the forecasts diverge because they are based on differing computer models "that are incorporating different data sources. Some of them incorporate data on recent trends in neighboring states. Some are incorporating information about which age groups are getting infected." Others are not. "All of those different data sources," says Reich, "mean that some models in certain states may be more pessimistic and other models might be more optimistic."

This doesn't mean that models with long time horizons like IHME's aren't useful, adds Reich. But he says their value is less about providing a hard number of how many deaths to expect, and more about helping to tease out the impact of different solutions — such as increased mask wearing or stay-at-home measures. As Reich puts it, they're "what-if projections into the future."