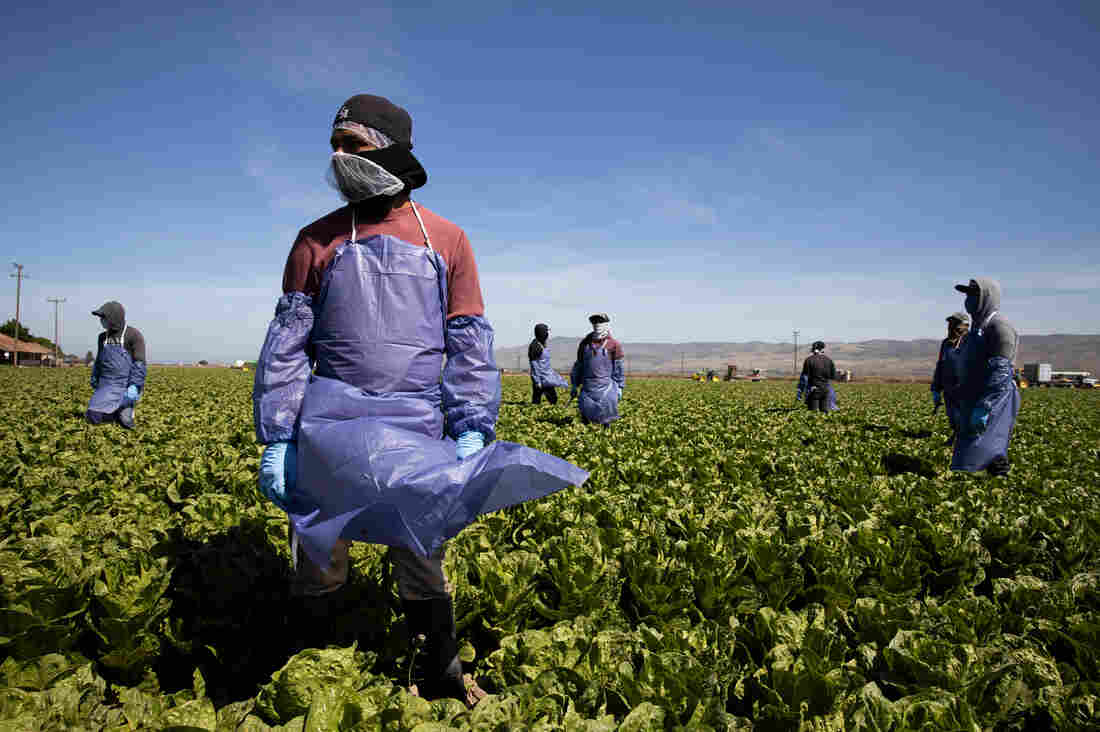 With the coronavirus spreading, farms try to keep workers like these in Greenfield, Calif. safe through physical distancing and other measures but advocates for laborers say protections are often not adequate. Brent Stirton/Getty Images hide caption 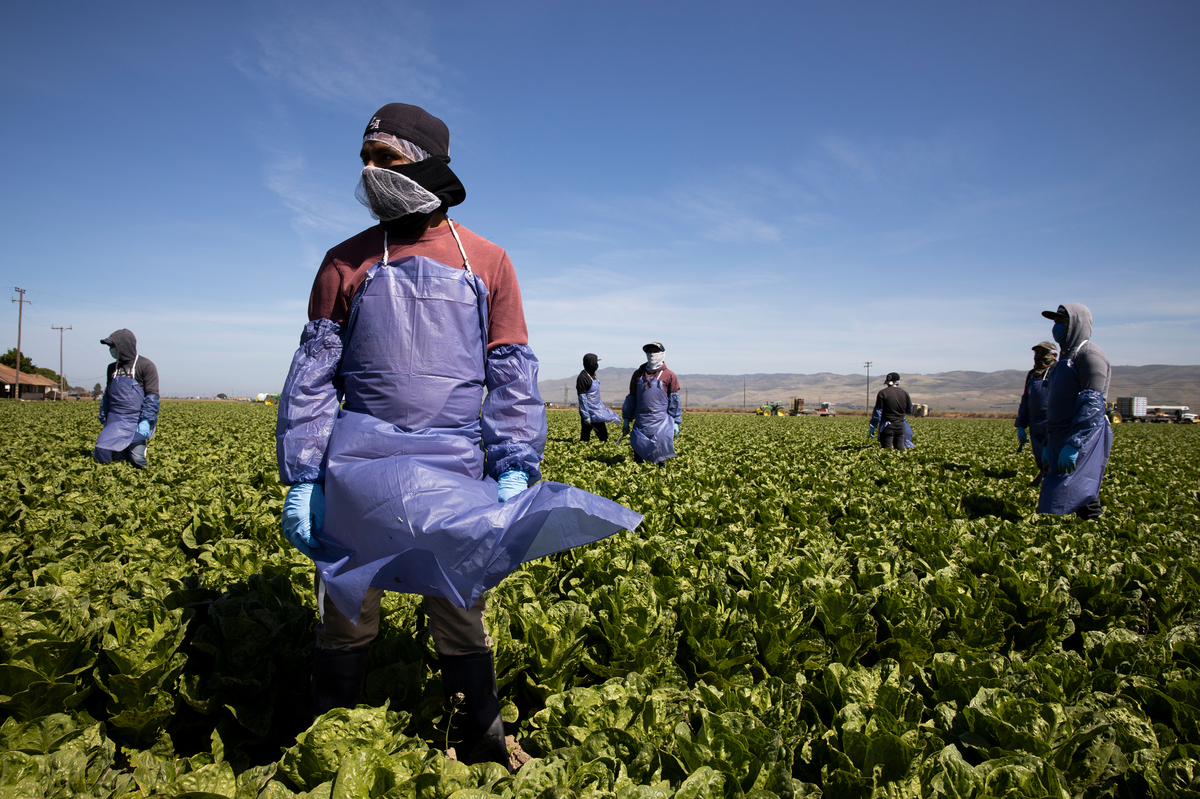 With the coronavirus spreading, farms try to keep workers like these in Greenfield, Calif. safe through physical distancing and other measures but advocates for laborers say protections are often not adequate.

It's a busy time for the tomato-producing farms in eastern Tennessee. Farms have staffed up with hundreds of workers, most of whom are Latino. Some live locally. Others are migrant workers who travel from farm to farm, chasing the summer growing seasons. Still others come from Mexico or Central America on temporary agricultural visas to work at certain farms.

But, this year, the season is taking place under a cloud of coronavirus worries that, for these agricultural workers, hit close to home.

"Almost every part of the process for picking tomatoes needs to be considered in light of COVID-19," says Ken Silver, an associate professor of environmental health at East Tennessee State University, who studies migrant worker health on Tennessee tomato farms.

After all, the workers live in close quarters, sleeping in bunk beds, and sharing bathrooms and kitchens. They ride crowded buses to fields and often work in groups. And even though farm employees are deemed essential workers, they often don't have health insurance or paid sick leave.

Farms have already reported outbreaks among hundreds of workers in states that include California, Washington, Florida and Michigan. And yet, the federal government has not established any enforceable rules either to protect farmworkers from the coronavirus or to instruct employers what to do when their workers get sick. While migrant worker advocacy groups say this allows farms to take advantage of their workers and increase their risk of exposure to the coronavirus, farms say they're doing what they can to protect workers with the limited resources they have, while also getting their crops harvested.

"I do think some employers are putting in necessary protections," Guild says. But she has heard of workers who, after testing positive for COVID-19, were still required to work or were sent back to their countries — an economic threat that creates a strong incentive for workers not to report mild symptoms. "I think it's hard to generalize. It really varies employer by employer."

Leaving it up to the farms

In June, 10 temporary workers out of about 80 at the Jones & Church Farms in Unicoi County, Tenn., tested positive for the coronavirus. Another farm in that county had 38 workers test positive around the same time.

"This was the scariest thing that could happen," says Renea Jones Rogers, the farm's food safety director.

Nationally, there have been at least 3,600 cases of farmworkers testing positive for COVID-19, according to media reports gathered by the National Center for Farmworker Health.

Add to this that farm employers and workers alike acknowledge that even the most basic interventions to stop transmission — social distancing and mask-wearing — often aren't feasible, especially in the hot temperatures. 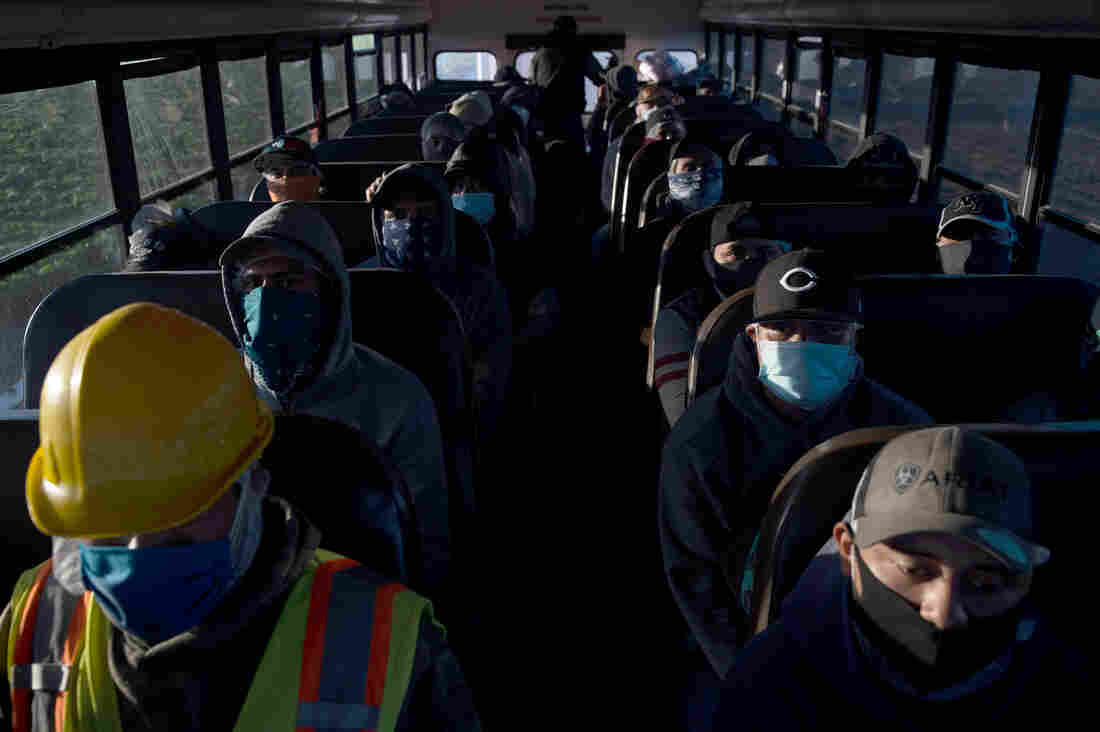 Farm laborers arrive for their shift in Greenfield, California, April 28, 2020. Traveling to the fields in crowded buses is one risk among others that workers often face daily. Brent Stirton/Getty Images hide caption

Saul, 52, is a temporary farmworker who has traveled from Mexico to Virginia every year since 1996 to harvest tobacco. In a WhatsApp message interview, he said masks are uncomfortable on the job because he is working outdoors, writing in Spanish, "En el trabajo es incómodo porque trabajamos al intemperie." (Kaiser Health News is not publishing Saul's last name so that he won't be identified by his employer.)

Saul said he does worry about the coronavirus, but because he lives at his job on the farm, he feels safe.

When he arrived in the U.S. in April, the farm provided him with information about the pandemic, masks and hand sanitizer, he said. Nobody takes his temperature, but he works in a crew of eight, lives with only three other workers and nobody on the farm has yet been diagnosed with COVID-19.

In Tennessee, the Jones & Church Farms put its own worker safety protocols in place at the beginning of the season. These included increasing sanitation, taking daily temperature readings and keeping workers in groups so they live and work with the same people.

After the 10 workers tested positive for COVID-19, the farm kept them all in the same housing unit and away from the other workers — but those who were asymptomatic also kept working in the fields, though they were able to stay away from others on the job, says Jones Rogers. 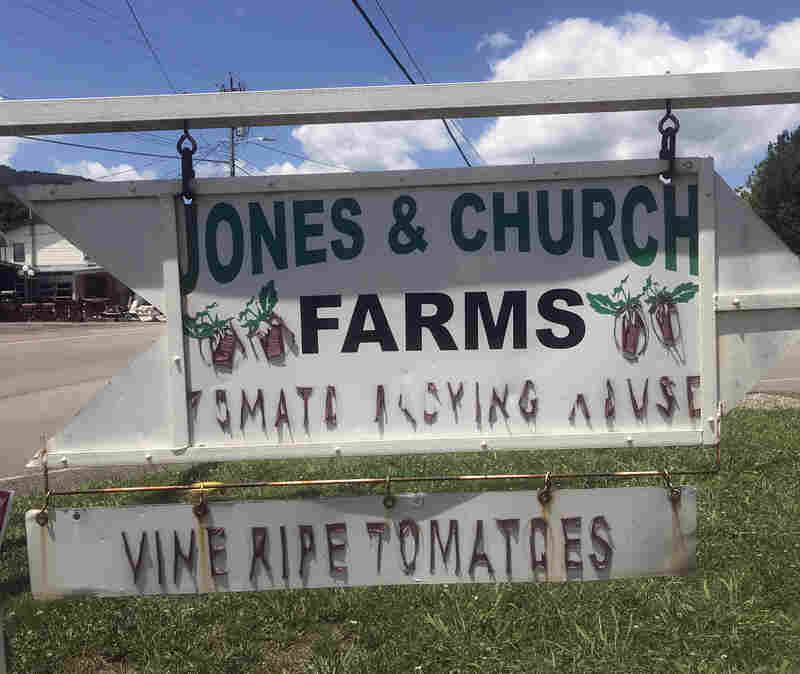 In June, 10 of about 80 temporary workers at Jones & Church Farms in Unicoi County, Tenn., tested positive for COVID-19. Nationally, at least 3,600 positive cases have been reported among farmworkers. Victoria Knight/ KHN hide caption

While the Department of Labor has not offered enforceable federal safety standards for COVID-19, it did collaborate with the Centers for Disease Control and Prevention to publish a set of voluntary, agriculture-specific guidelines. Those were released in June, just days after Jones & Church became aware of the farm's outbreak.

Much of what had already been done at Jones & Church, though, tracked closely with those recommendations, which also suggested that workers be screened every day for COVID-19 symptoms and that those who become sick be given their own space to recover apart from others.

Advocates say these guidelines are sound, in theory. Their glaring flaw is that they are voluntary.

"We don't believe that the health and safety of workers should be left to the good will of employers," says María Perales Sanchez, communications coordinator for Centro de Los Derechos del Migrante, an advocacy group with offices in both Mexico and the U.S.

A Department of Labor spokesperson offered a different take. "Employers are and will continue to be responsible for providing a workplace free of known health and safety hazards," the spokesperson says, adding that the Occupational Safety and Health Administration's preexisting general-safety standards and CDC guidelines are used to determine workplace safety violations. OSHA is an agency within the Labor Department.

Farm industry groups are apprehensive of any increased federal regulation.

"I don't think OSHA would be able to have some sort of mandatory regulation that wouldn't disadvantage some farmers," says Allison Crittenden, director of congressional relations for the American Farm Bureau Federation.

Farms have already put many COVID-19 protections in place, she says, "and if these actions are taking place in a voluntary way, we don't see that we need to have a mandatory requirement."

Saul, the Virginia tobacco farmworker, says he didn't believe he has any health insurance. If he gets sick, he would need to tell his farm employer, who would then have to drive him to the doctor. The closest city to the farm is 15 miles away. Who is responsible for these costs — the worker or the farm — depends on individual circumstances.

Many farms employ mostly Latino workers, and CDC data illustrates that it's much more likely for Hispanic or Latino people to be infected, hospitalized or die from COVID complications than white people. Experts also warn that because the COVID pandemic is disproportionately affecting people of color, it could widen preexisting health disparities. 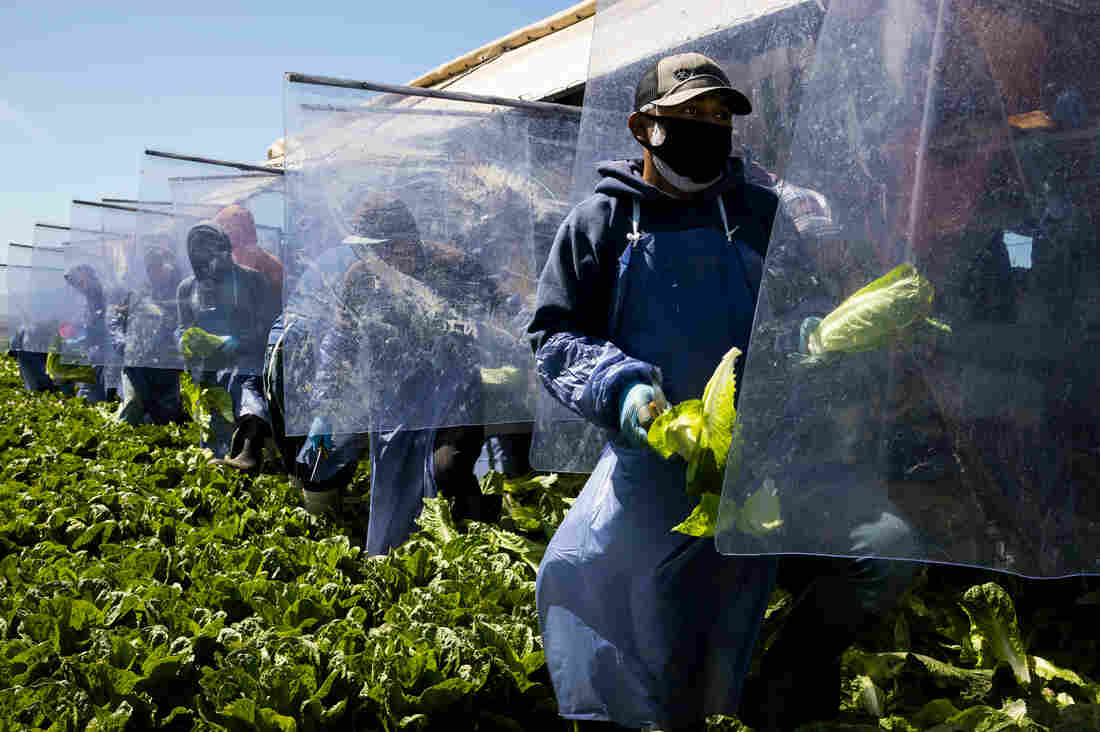 Also, seeking a doctor's care can feel risky for migrant farmworkers. Workers who are undocumented may worry about being detained by Immigration and Customs Enforcement, while workers who have green cards may be concerned about the Trump administration's "public charge rule." This controversial rule weighs immigrants' use of public programs, including health care, against their applications for citizenship. However, the federal government has said seeking treatment for COVID-19 wouldn't fall under the rule.

And while contact tracing is important to stop the spread of COVID-19 among farmworkers, many health departments don't have translators on staff who can speak Spanish or Indigenous Central American languages, nor has there been a systematic nationwide tracking of farmworker outbreaks thus far, as has been done with long-term care facilities outbreaks.

So "it's really hard to get a grasp on how many farmworkers specifically are testing positive," says Guild with Farmworker Justice.

That could be an issue for tracing outbreaks, especially as the harvesting season ramps up for certain crops and farms bolster their workforces.

At the end of July, almost 90 additional temporary workers arrived at Jones & Church Farms to help harvest tomatoes through October, says Jones Rogers. Though the 10 workers who had COVID-19 have recovered, she says she's scared that if more get the disease, there won't be enough housing to keep sick workers separate from others or enough healthy workers to harvest the crops.

"Tomatoes don't wait until everyone is feeling good to be harvested," says Jones Rogers.