Accessibility links
'Radical' Coronavirus Testing Plan Could Offer A 'Return To Normal,' Writer Says : Shots - Health News Atlantic journalist Alexis Madrigal says millions of at-home saliva tests for the coronavirus could be the key to a safe reopening — even if they are less accurate than the traditional PCR tests. 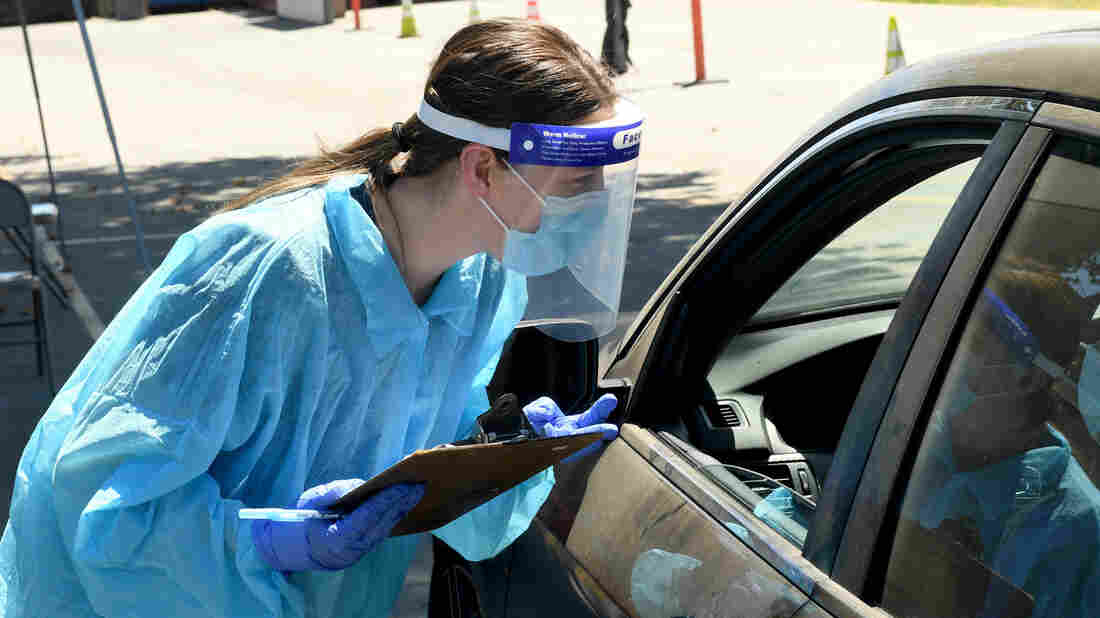 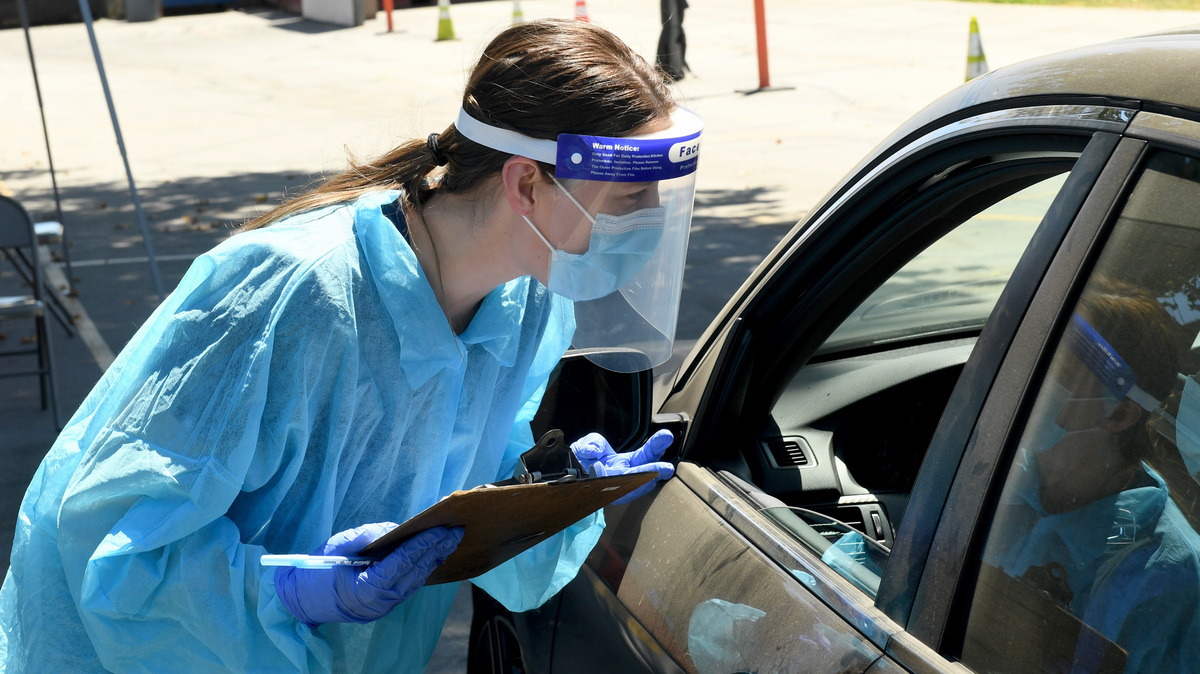 The COVID-19 pandemic has shuttered schools and businesses and altered life across the globe, but journalist Alexis Madrigal says comprehensive, rapid testing might be the key to a safe reopening.

"The key problem in the pandemic is we don't know who's contagious," Madrigal says. "And because of that, it is very hard to really grind transmission down to nothing."

For his latest article in The Atlantic, Madrigal talked with public health experts, including Harvard epidemiologist Michael Mina, who cite the potential benefits of widespread testing for the virus with a simple rapid tests. Such a test would be less accurate than the current PCR test, but it could offer results in minutes — rather than days.

"We have a lot of tests in the United States now, but they're pretty expensive, and they actually take awhile, generally speaking, to come back," Madrigal says. "What we really need is something that [provides results in] minutes so that you know before you leave your house: 'Am I contagious?' "

Madrigal says a turn to inexpensive widespread testing is a question of "finding the right tool for handling the precise public health crisis that we have now."

"I think what's happened in the U.S. has been so catastrophic on so many levels — economically, psychologically, educationally — that we have to be at least willing to entertain the idea of a fairly radical plan that could work," he says. "If this plan didn't seem like it had the potential to return to normal life, it wouldn't be worth trying."

On the PCR test, which is highly accurate, but also expensive and slow to provide results

The turnaround time for a lot of these tests is, say, between one day and seven days or, in a lot of bad circumstances during the pandemic, even up to two weeks. So these tests are this really specific tool. They are extremely accurate. ... They can pick up tiny amounts of viral genetic material. But they also come with these downsides: They take awhile to return results, they're dependent on these supply chains for chemicals called reagents, as well as swabs, as well as particular kinds of test tubes. And they tend to run on these things that are called platforms, which are produced by big pharmaceutical companies. Those machines ... themselves are pretty expensive. And so you have the cost problems, and you have the turnaround-time problem. So they're just absolutely amazing tests, but they have these downsides.

Oftentimes, you're contagious before you have symptoms or right when you're getting them. So let's say you get a little bit sick or you detect some symptom. You wait a few days before you get a test, or you have to wait because oftentimes that's been happening. By the time you even get the test, you might already be out of the most contagious phase of the disease. So that's really why this mismatch of timelines is really a big problem.

On less expensive antigen tests that get same-day results

The main way that people can imagine doing a lot of rapid testing is through antigen testing. So that basically means it's looking for a protein that the virus produces and not the actual genetic material. So it's kind of a different target. It's less sensitive. It's more likely to tell you you don't have the virus when in fact you do. These tests are simpler. That's probably the best way of putting it, and there are two different kinds: One is sort of the Nespresso model. There's like a little machine — and you do the test and the machine sort of pops back the result. And those are normally done, say, at a doctor's office or a nursing home is a big location for this kind of testing. It's called the point-of-care testing. ... There are a couple of those tests approved by the [Food and Drug Administration] for use. And the federal government has bought a lot for nursing homes.

The other kind of test would be a simple strip test. So the thing that most people are probably most familiar with would be a pregnancy test. There's also tests like this for dengue fever — about 100 million of those are done each year. And these kinds of tests are just extremely simple, relatively speaking, and you'd be really doing them at home. They wouldn't be in a doctor's office. They wouldn't be in any kind of institutional setting. You'd either do them at school, or you'd do them in the workplace, or you'd do them at home.

To be clear, the kind of test that we're talking about wouldn't have the accuracy of the [PCR] tests that have largely been employed, but it would catch a bunch of people who were asymptomatic. It would catch a bunch of people who were pre-symptomatic, and it would stop a lot of transmission chains that otherwise would have gotten going. And that's really the promise of this kind of testing regime. You test a lot, and actually testing frequently helps make up for some of the lower sensitivity of the test, and because many people would be testing themselves, you'd gain the advantage of widespread testing covering large chunks of the population — rather than fairly narrow testing, capturing just a tiny slice of the possible number of infected people each day. ...

It requires volume. We've got to out-volume the virus.

On why he believes the upside of rapid testing outweighs downsides

There are downsides. There are going to be situations in which someone takes one of these rapid tests, gets a negative, goes and sees someone they love, and it turns out they were contagious. That is going to happen. The thing is, that already happens now. And we're not catching a huge percentage of the infections. This is really kind of a crucial thing to understand: We don't even really know how to estimate the ratio between cases we can confirm with the PCR test and the number of people who have actually been infected. Maybe we're catching 5% of the cases. Maybe we're catching 10, maybe we're catching 20%. Maybe it's 50% in some places and 2% in other places. What we do know is there are a lot more infections than there are confirmed cases. That is absolutely clear at this point, based on the antibody testing that's been done in hard-hit places in New York and in other areas.

On how the federal government would need to do a World War II-style production blitz to make hundreds of millions of rapid-result, saliva-strip tests available

On a technical level, some of these tests already exist; half a dozen companies are working on something like this. The big problem is in order to scale up a lab technology to something that would be distributed to hundreds of millions of people all the time, you kind of need the government's muscle ... and go on a World War II-style production blitz.

I'm here in Oakland. There were a bunch of [military] ships that were produced here in the Bay Area, and the government just moved the money and capital and worked with companies to build tons of ships, liberty ships, that helped win World War II. They're basically saying we need a similar kind of effort, the government to come in and basically nationalize the companies that are working on these technologies and scale up their manufacturing, take over factories and just go.

It would be a huge effort, but this is a national emergency. And if you compare it to things like [what] the Fed did, say, in 2008, that's actually not as extreme as what we did, sort of, to get our banking system up and running. This would be a technology that might get our entire country back up and running. And so the argument by proponents of this plan is we're spending trillions of dollars to keep the country running forward. Why wouldn't we put $10 [billion] or $20 [billion] or $30 billion toward the creation of this other kind of system, or even a billion dollars? We haven't really put more than a few hundred million dollars into testing technologies in the United States. And yet they could be a key part of getting us out of this quagmire.

Amy Salit and Joel Wolfram produced and edited the audio of this interview. Bridget Bentz, Molly Seavy-Nesper and Deborah Franklin adapted it for the Web.