Accessibility links
Dual Infections: When Coronavirus And Flu Virus Compete : Shots - Health News There's a lot that scientists don't know about how viral infections can interact. But researchers are eager to figure out how coronavirus infections might affect flu infections and vice versa. 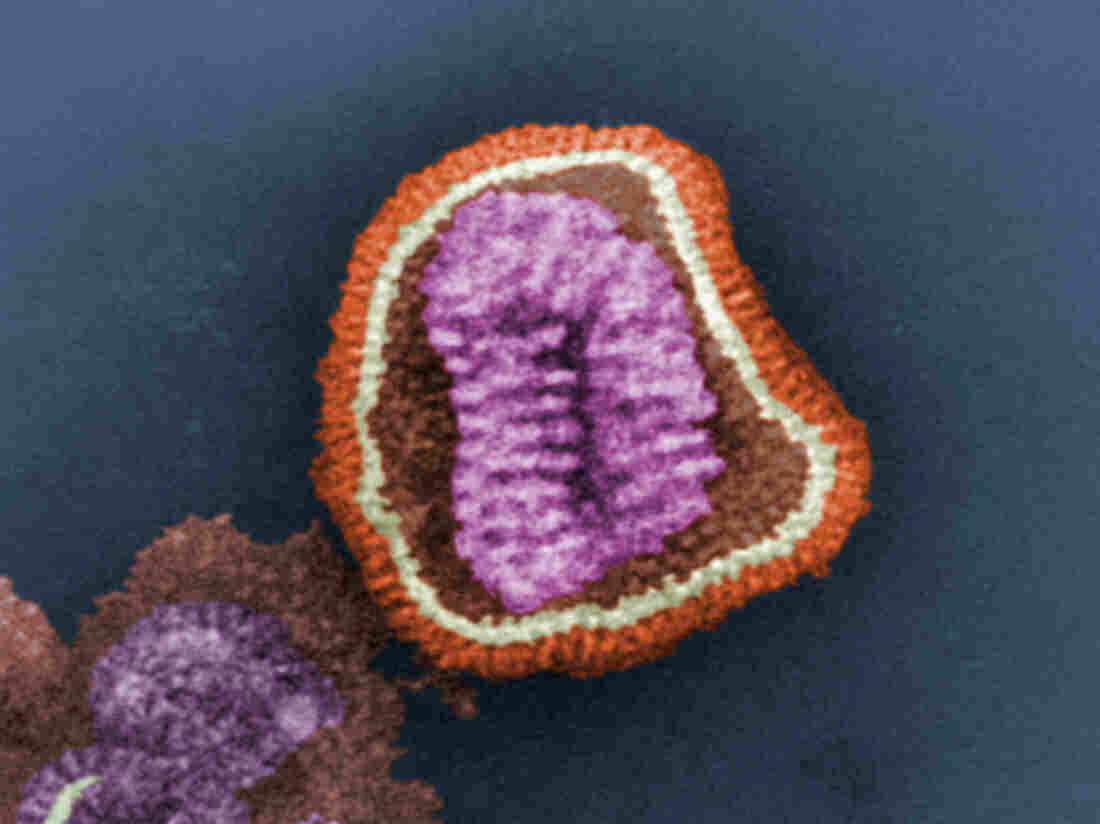 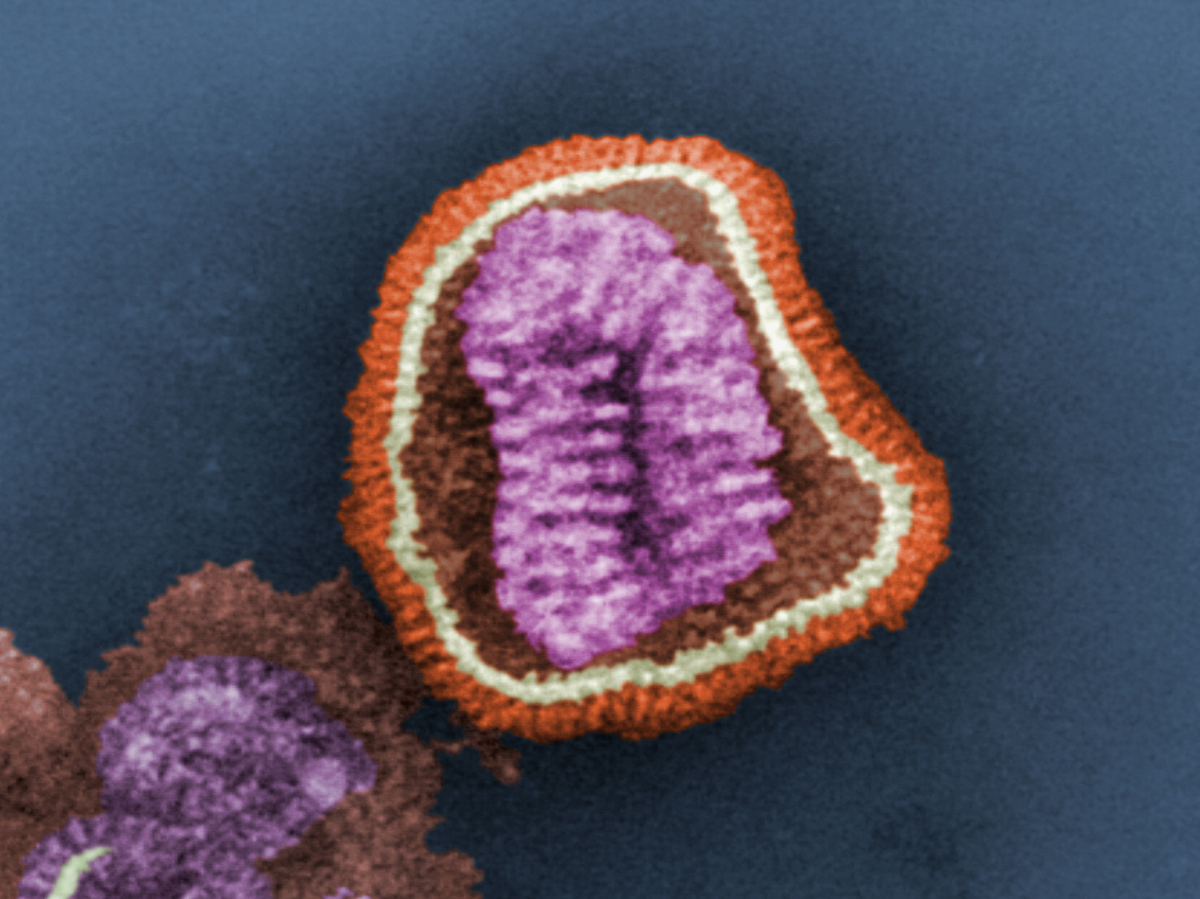 This negative-stained transmission electron micrograph depicts the ultrastructural details of an influenza virus particle, or virion.

With the annual flu season about to start, it's still unclear exactly how influenza virus will interact with the coronavirus if a person has both viruses.

Still, "it is quite possible and likely that the two viruses could infect a patient at the same time or, for that matter, sequentially: one month, one virus, and the next month, the other virus," says Michael Matthay, a professor of medicine at the University of California, San Francisco.

Both viruses can cause dangerous inflammation in the lungs that can fill the airspaces with fluid, making it difficult to breathe, he notes.

COVID-19 is so new, though, that scientists just don't have enough research to know for sure.

Generally speaking, co-infections are common when it comes to respiratory diseases. Helen Chu, an associate professor of medicine at the University of Washington in Seattle, has done studies to screen people with respiratory symptoms for a variety of viruses.

"We often find the presence of more than one virus at a time," says Chu, but that doesn't necessarily mean that there's actually more than one active infection. "You could be at the end of your illness, so you are no longer symptomatic from it, but you can still detect nonviable virus."

Past research suggests that viruses can have complicated interactions when two are present. An extra virus can do nothing at all, can make an illness more severe or possibly even have some kind of short-term protective effect.

For example, it's unclear if rhinovirus can make a bout with flu worse, says Chu.

"But for a lot of the other viruses that are known causes of disease like parainfluenza virus and human metapneumovirus and human coronavirus, those can work with flu and cause you to have more severe disease," says Chu.

Not everyone agrees on that. "There are many studies all over the map," says Sarah Meskill, assistant professor of pediatrics and emergency medicine at Baylor College of Medicine in Houston.

"The studies looking at previous coronavirus infection with influenza are so sparse it's really hard to know," adds Meskill, saying that her gut reaction is that "we're going to see co-infections, we are going to see patients positive for both" flu virus and the coronavirus.

Some epidemiological research shows that respiratory viruses can compete with each other in a way that means one virus can suppress the spread of another.

RSV and influenza virus are a good example of that, says Meskill, explaining that when both try to infect the same cell, one will win. What's more, when RSV levels in a population tend to be high, levels of flu tend to be low, and vice versa.

Tanya Miura, a virologist at the University of Idaho, says that when a new pandemic flu virus swept through in 2009, "it was delayed in certain populations that were having ongoing outbreaks of other respiratory viruses at the time."

Her work with lab animals shows that getting a mild respiratory virus can seem to offer some protection against getting a different, more severe one a couple of days later.

In the Southern Hemisphere, where the flu season is just coming to an end, doctors saw very little flu at all this year, probably mostly because of travel restrictions, the wearing of masks and social distancing.

And the number of circulating respiratory viruses does seem to be lower up north, too, says Chu, who has been searching for them in her city: "There's really no transmission of these other viruses going on in the community right now. That is what we are seeing in Seattle."

The flu isn't completely absent, though. "I can tell you that we're starting to find flu," says Chu. "It's very important to get vaccinated."

Getting vaccinated against seasonal flu would both protect people against a double whammy from the flu and COVID-19 and reduce the total number of flu cases. That would help a health care system that is struggling to cope with one serious respiratory illness already.

It's worth noting that the symptoms of the flu — fever, muscle aches, cough — can be very similar to those of COVID-19.

"Just because you test positive for the flu doesn't mean you don't have coronavirus," says Meskill. "You should still be doing your social distancing and quarantining."

And some researchers are getting ready to look at people who have mostly recovered from the flu and then get COVID-19. "Is it going to make it worse? Is it going to limit the virus or the transmission?" wonders Stacey Schultz-Cherry, an infectious diseases researcher at St. Jude Children's Research Hospital in Memphis, Tenn. "We're actually starting those studies soon."