Accessibility links
Will Labor Day Weekend Spark More COVID Hot Spots? Up to Us. : Shots - Health News Many are worried that Labor Day will be like the Fourth of July and Memorial Day, when travel and celebrations fanned the flames of viral spread, especially across the U.S. South and West. 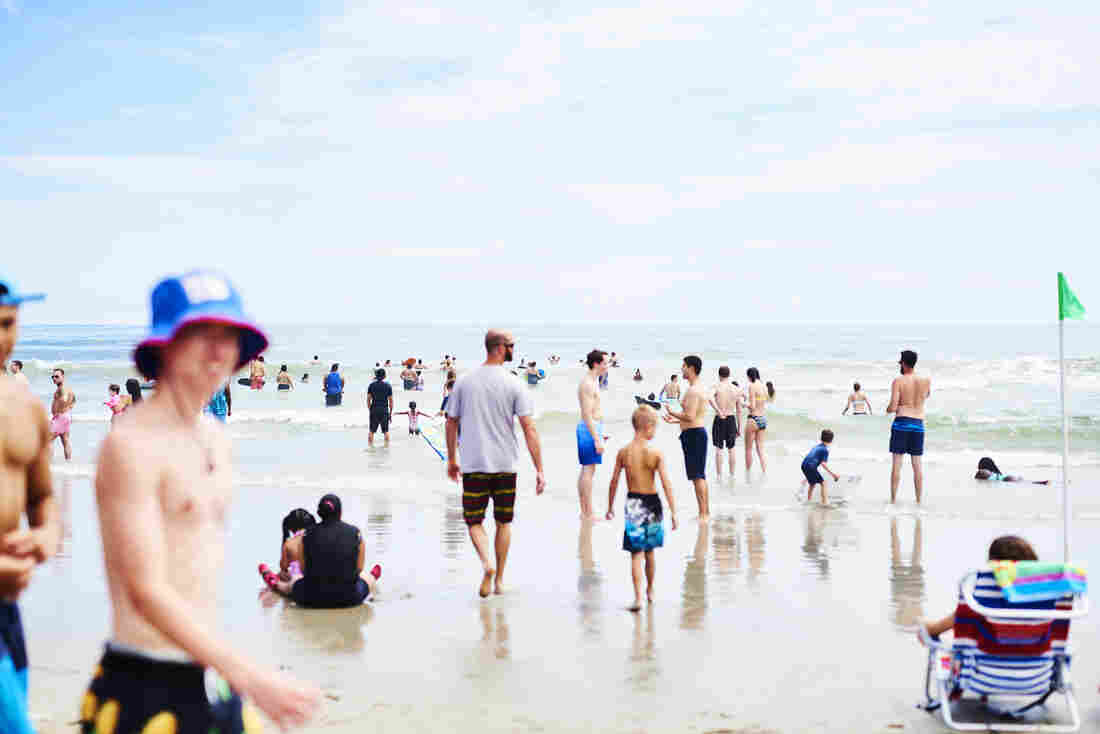 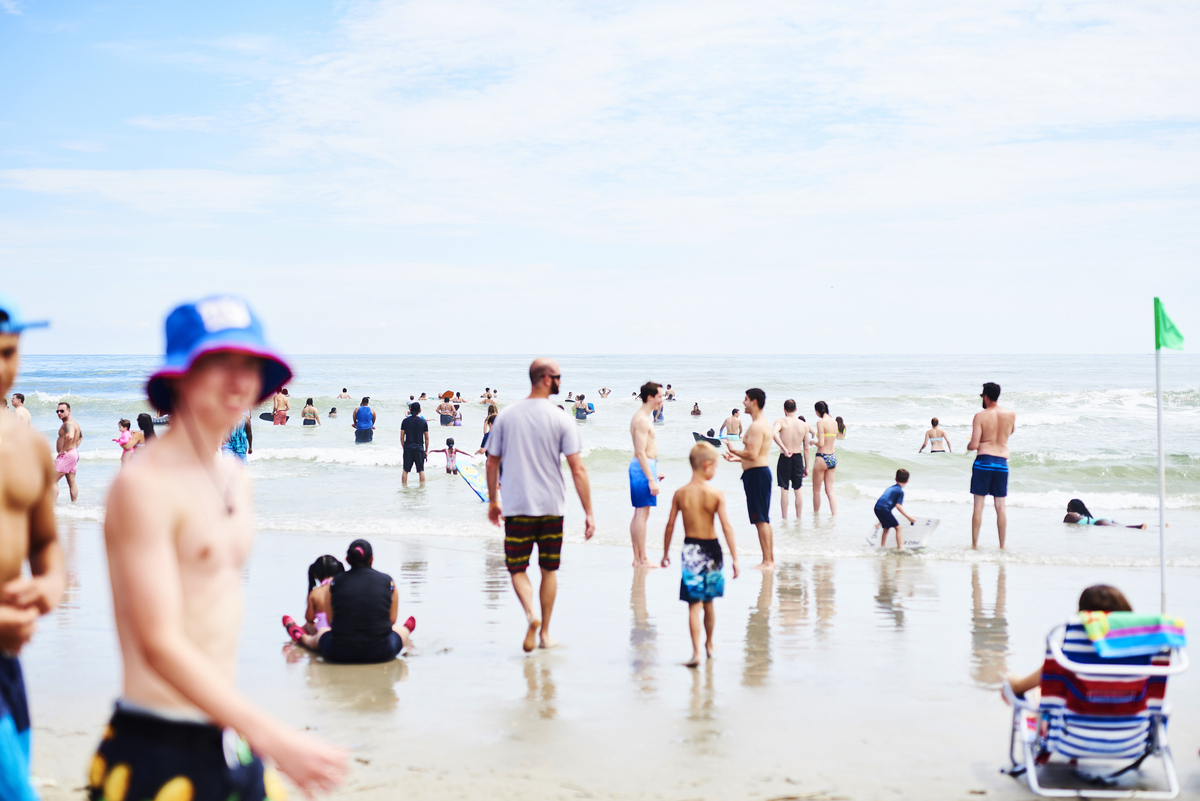 People roamed the beach in Ocean City, N.J, at the start of August. As Labor Day weekend arrives, Dr. Anthony Fauci, director of the National Institute of Allergy and Infectious Diseases, says Americans should remain vigilant to avoid another surge in coronavirus infection rates.

Hopefully, summer won't end the way it began. Memorial Day celebrations helped set off a wave of coronavirus infections across much of the South and West. Gatherings around the Fourth of July seemed to keep those hot spots aflame.

Now Labor Day arrives as those regions are cooling off from COVID-19, and public health experts are calling on Americans to stay vigilant while celebrating the holiday weekend.

"Wear a mask, keep social distancing, avoid crowds. You can avoid those kinds of surges," said Dr. Anthony Fauci, director of the National Institute of Allergy and Infectious Diseases, during a Today show interview on Wednesday. "You don't want to be someone who's propagating the outbreak. You want to be part of the solution, not part of the problem." 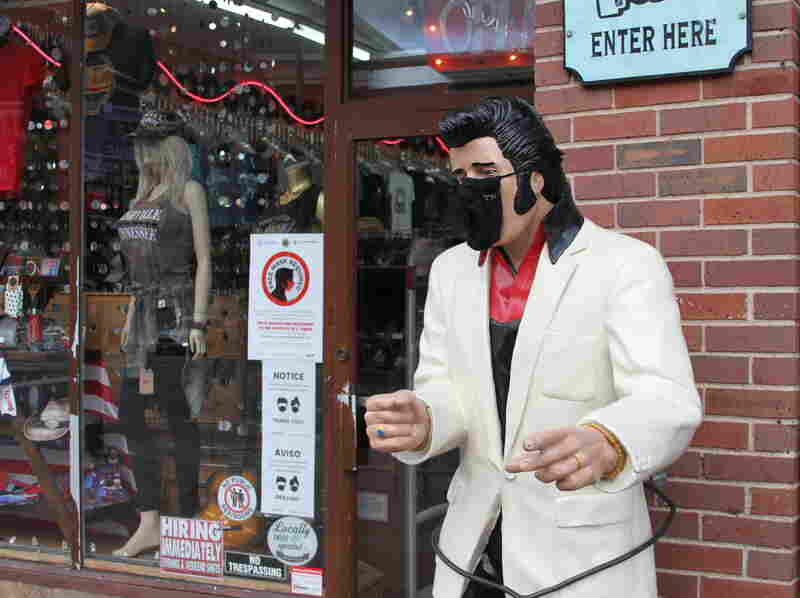 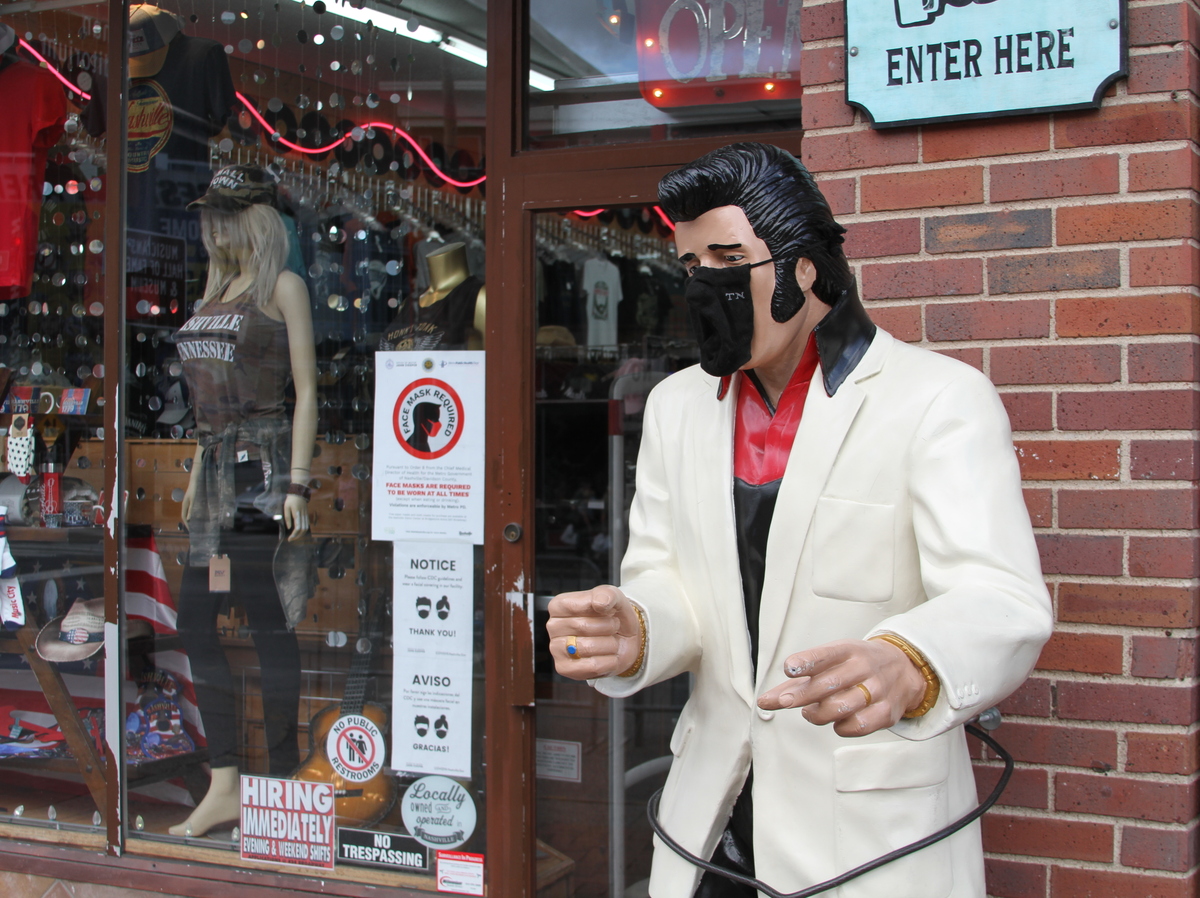 But travelers are also weary of staying home, and tourist destinations are starved for cash.

"Just getting away for an hour up the street and staying at a hotel is like a vacation, for real," says Kimberly Michaels, who works for NASA in Huntsville, Ala., and traveled to Nashville, Tenn., with her boyfriend to celebrate his birthday last weekend.

In time for the tail end of summer, many local governments are lifting restrictions to resuscitate tourism activity and rescue small businesses.

Nashville, for instance, gave the green light to pedal taverns this week, allowing the human-powered bars-on-wheels to take to the streets again. "They're not Nashville's favorite group, frankly. But fairness requires this protocol change to take place," Mayor John Cooper said, noting the city's dramatic reduction in new cases. This week, the city also raised the attendance cap on weddings, funerals and other ceremonies. 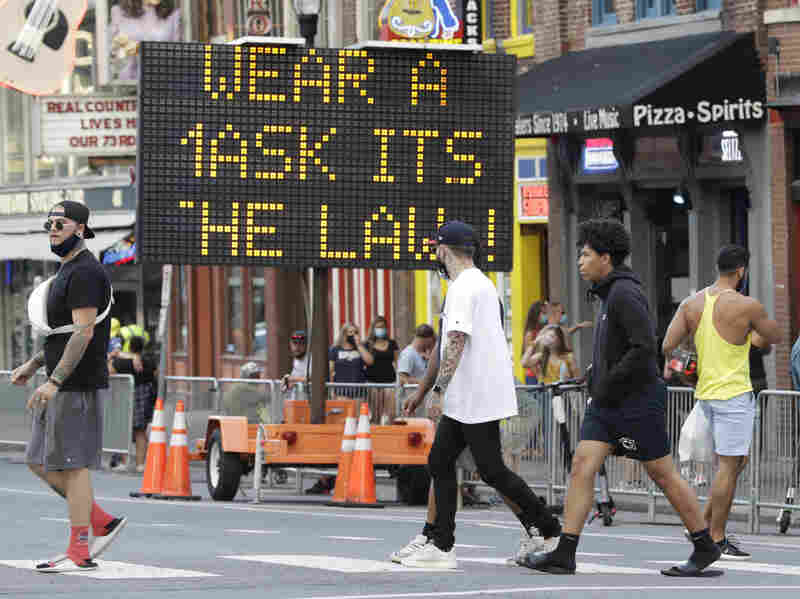 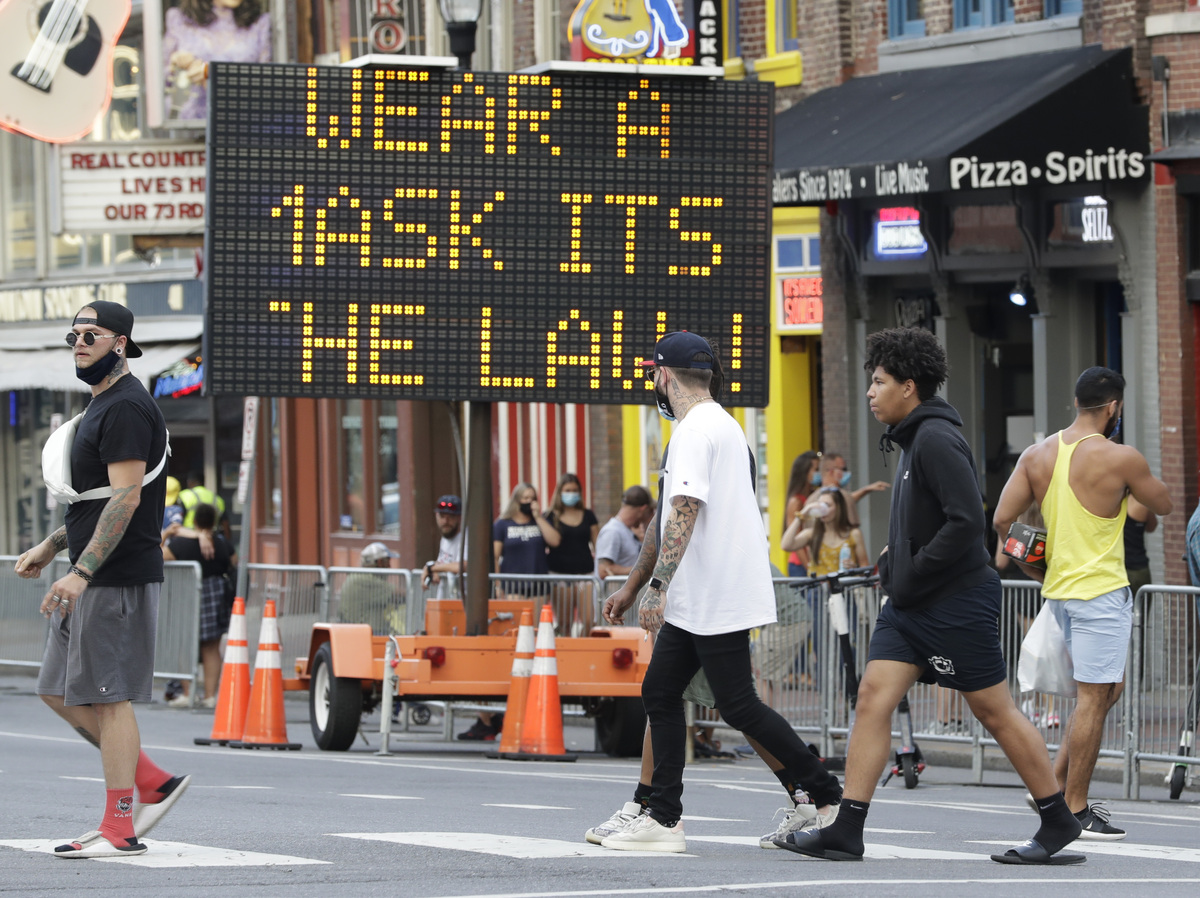 A sign reminds tourists to wear masks while visiting honkey-tonks and restaurants in downtown Nashville on Aug. 5.

Elsewhere, Virginia Beach tried to get some leniency for its struggling restaurants over the holiday weekend. But Virginia Gov. Ralph Northam, encouraged by Fauci, rejected pleas from the mayor. Fauci has encouraged governors to keep restrictions in place to avoid another holiday-related surge.

"Sometimes, as we start to lift restrictions, the impression that people get is 'Oh, that must mean it's safe,'" says epidemiologist Melissa McPheeters of Vanderbilt University. "We want to make sure we don't give that impression because this disease has not gone anywhere."

Some communities have gone the other direction and reimposed restrictions, especially for the three-day weekend. Santa Barbara, Calif., has banned sunbathing to avoid another surge in cases.

With school back in session, it's harder to avoid exposure

There's also a new X-factor with summer's last holiday weekend. In many states, schools have resumed in-person classes. So families and friends meeting up now are more likely to expose each other to the virus, even if they tried to keep to a tightly closed circle over the summer.

"If those bubbles now have kids that went back to school and are interacting with others or they've gone back to sports and the bubble has since expanded, that ability to be safely together in a gathering is probably less likely," says epidemiologist Bertha Hidalgo of the University of Alabama-Birmingham.

And yet, getting together safely — preferably outdoors — is still worth a try, Hidalgo says. She says people's mental health needs a boost to get through the next few months.

"If you can do the safe things now before winter hits and that cold weather hits, then you'll be more resilient to get through any bad times that may come," she says.

In travel destinations like Nashville that have welcomed visitors throughout the pandemic, tourism has not bounced back entirely. But on some weekend nights, the neon-bright tourist district can draw a crowd.

This week, Vaj Vemulapalli and his girlfriend, of Dallas, turned back to their hotel after feeling uncomfortable with how tightly people were packed together.

"We crave the social interaction, the going out to bars and everything," he says. "But at the end of the day, our general stance is it's not worth getting [COVID-19] just to get a drink."

Those crowds do face some restrictions, though, as Kimberly Michaels and birthday boy Marcus Robinson discovered. They arrived in Nashville fashionably late, masked up and ready to responsibly party. But after they checked into their hotel, they discovered that everything has to shut down by 10:30.

"It's crazy. It was like the twilight zone," Robinson says. "We went in [to the hotel] and the streets were full. Got dressed, came downstairs. Like, where did everybody go? Like, did something happen? But we didn't know, because we're not from here." 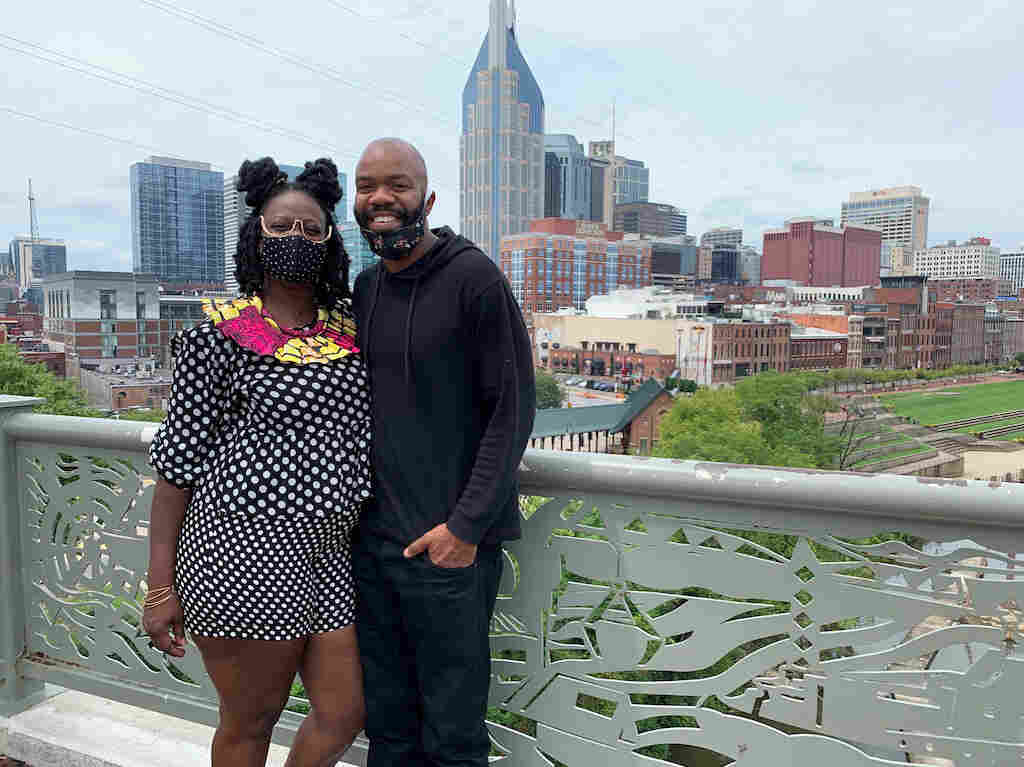 Kimberly Michaels and Marcus Robinson of Huntsville, Ala., drove to Nashville for a night to celebrate Robinson's birthday. The streets were crowded when they arrived and then quickly cleared as establishments closed at 10:30 p.m. Blake Farmer/ WPLN hide caption

Still, as time goes by, some travelers are willing to take more risks to get back to activities that feel normal.

Suzette Ourso lives outside New Orleans and flew to Nashville for her first out-of-town trip since the pandemic hit. She says she's cautious, wearing her mask whenever near anyone else.

"I keep hand sanitizer in my purse now. That's something I've never really done before," she says. "But you can die tomorrow riding in your vehicle. So you can't live your life in fear, either."

Ourso has a trip to the beach planned for later in the month.