Accessibility links
PHOTOS: A COVID Summer Of Community, Despite Social Distance : Shots - Health News Celebrations, milestones and daily routines happen whether we're ready or not, and the summer of 2020 was no different. As Americans sought relief in an ongoing pandemic, they got creative. 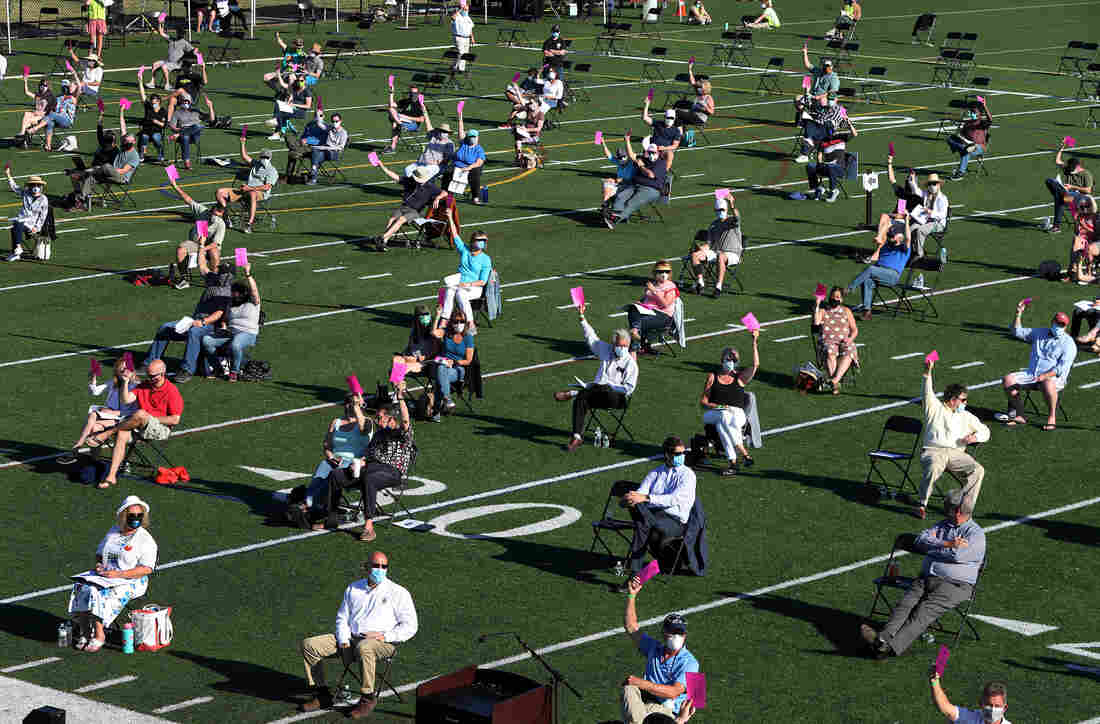 The annual town meeting in North Andover, Mass., which dates back to 1646, was held outside on June 16 on a high school football field to help keep participants a safe distance from each other. Jim Davis/The Boston Globe via Getty Images hide caption 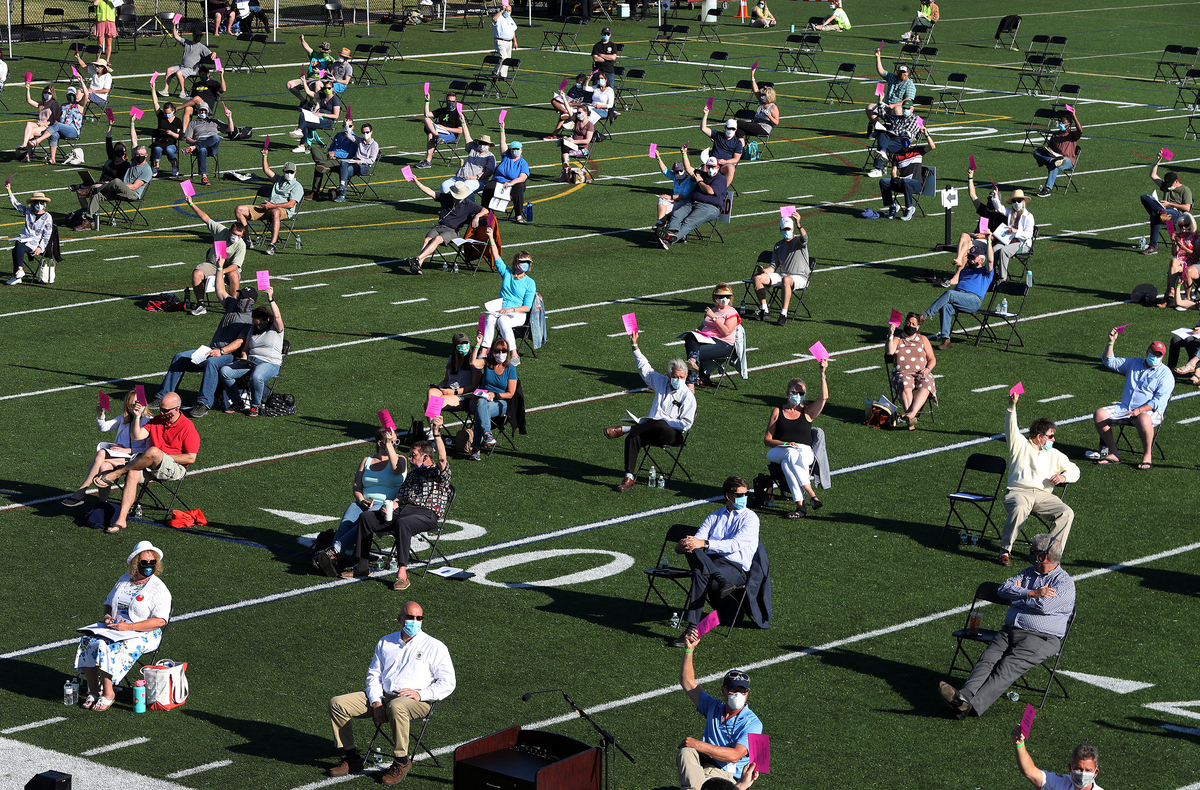 The annual town meeting in North Andover, Mass., which dates back to 1646, was held outside on June 16 on a high school football field to help keep participants a safe distance from each other.

What a strange summer it's been.

All across the United States and beyond, people have changed their daily routines to stay safe during the coronavirus pandemic. An anxious spring spent under lockdown in many parts of the U.S. turned into a summer of continued virtual meetings, financial stress and isolation — along with pent-up desire to seek relief in whatever ways we could. So, plastic partitions went up, town hall meetings moved to football fields, National Parks became even more popular, and indoor movie dates shifted to film nights beneath the stars.

In other words, Americans got creative. Everyday routines and important ceremonies continued around the U.S., but with a very different look. 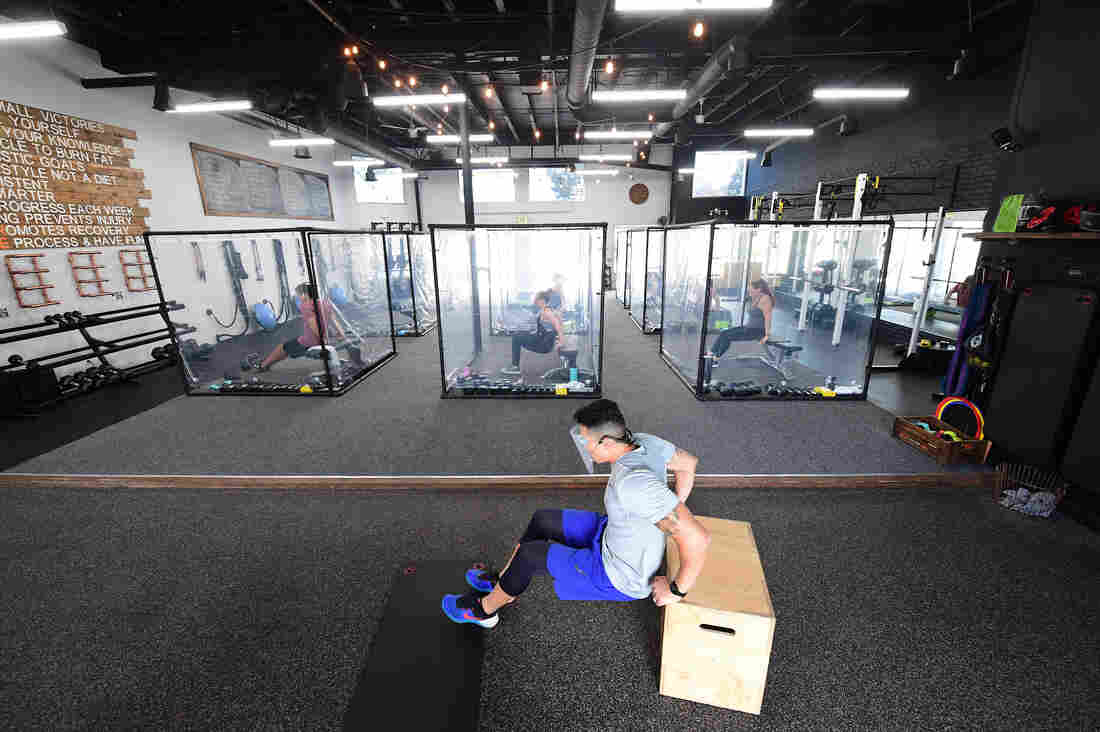 With the season drawing to a close, NPR asked photographers to remind us what America has looked like during this summer of social distancing.

Escapes To Nature And Fresh Air

In Phoenix, freelance photographer Ash Ponders spent time at the Salt River in mid-August, a 200-mile waterway on the edge of town that drew locals eager to swim, fish, or go tubing in the sweltering summer months. Though professional tubing operations halted because of the pandemic, the river remained an outdoor escape. 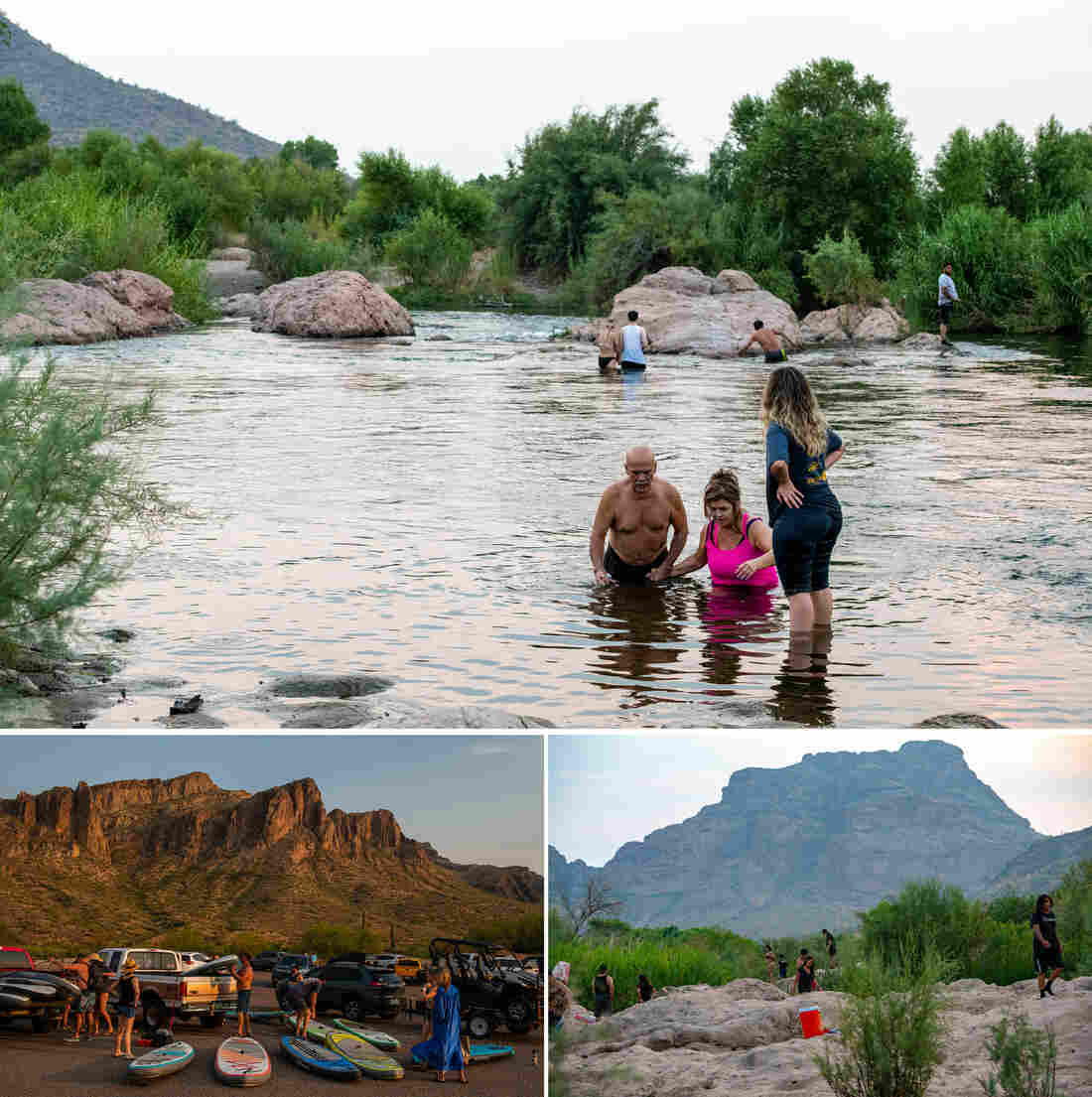 "Everyone had masks in their pockets," Ponders recalls. When people saw others at the river, "they'd don them ahead of time."

Ponders spoke with a group of friends who had lugged inner tubes and snacks to the river on a Friday night just to watch the sunset. Jacob Willeford, one of the friends, said spending time near the water was better than what he'd be doing otherwise, "sitting at home; furloughed." 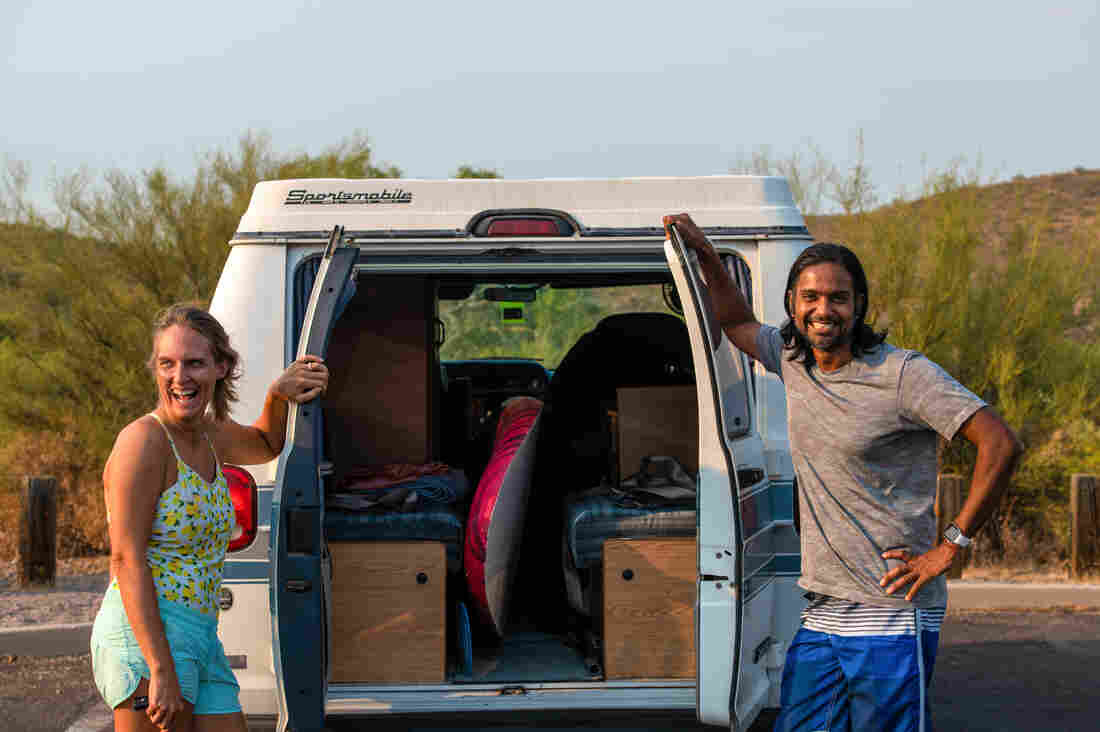 At the Salt River, Rachel and Prashan Srinivasan show off the interior of their "pandemic purchase", a 1990s van with a pop-up top and room for sleeping. They bought the van to have a COVID-safe space to travel around in. Ash Ponders for NPR hide caption 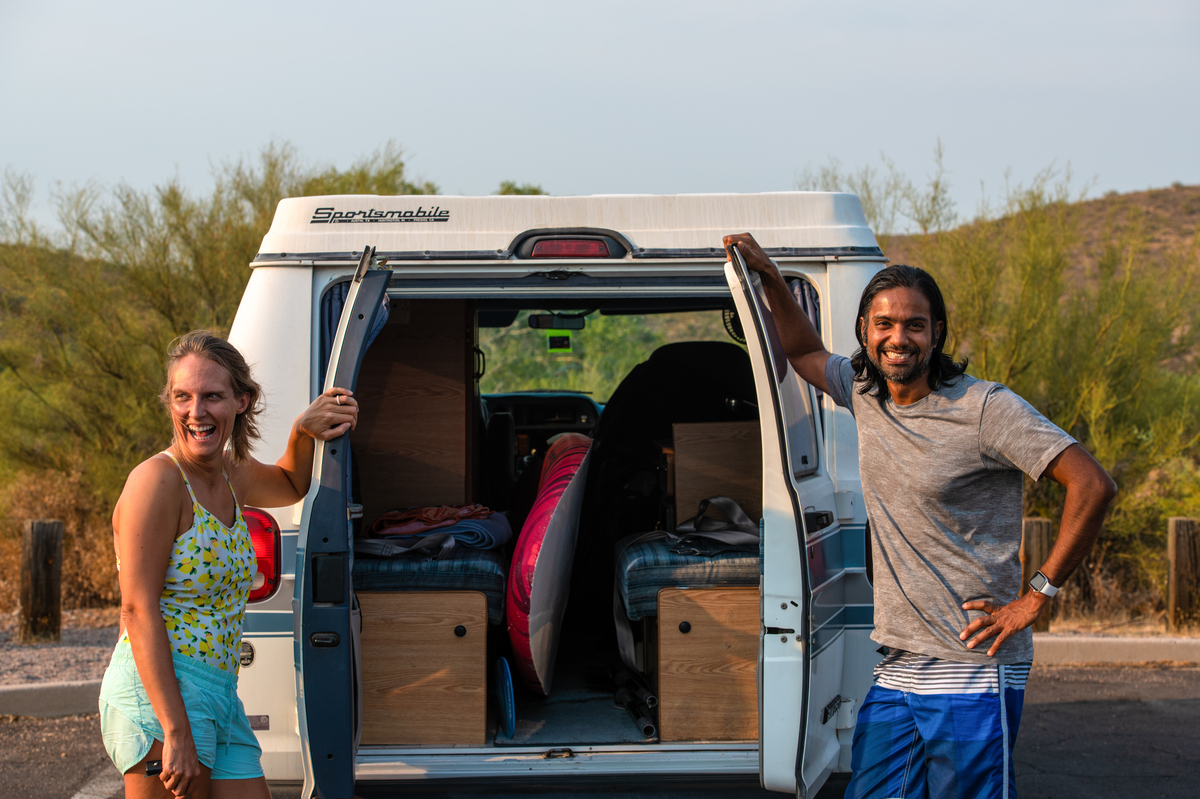 At the Salt River, Rachel and Prashan Srinivasan show off the interior of their "pandemic purchase", a 1990s van with a pop-up top and room for sleeping. They bought the van to have a COVID-safe space to travel around in.

When photographer Chona Kasinger visited a blueberry-picking farm in the Snohomish River Valley outside of Seattle in August, she found field attendants guiding visitors to rows of berry bushes loaded with ripe fruit. The guides were responsible for ensuring that, even on a farm, people remained 6 feet apart and kept their masks on.

This year, Mountainview Blueberry Farm set up designated hand-washing stations, provided sanitized berry baskets, and had customers purchase their berry hauls from clerks stationed behind plastic partitions. Despite the changes to the picking protocol, Keith Stocker, one of the owners, says the farm was as busy as it's ever been. 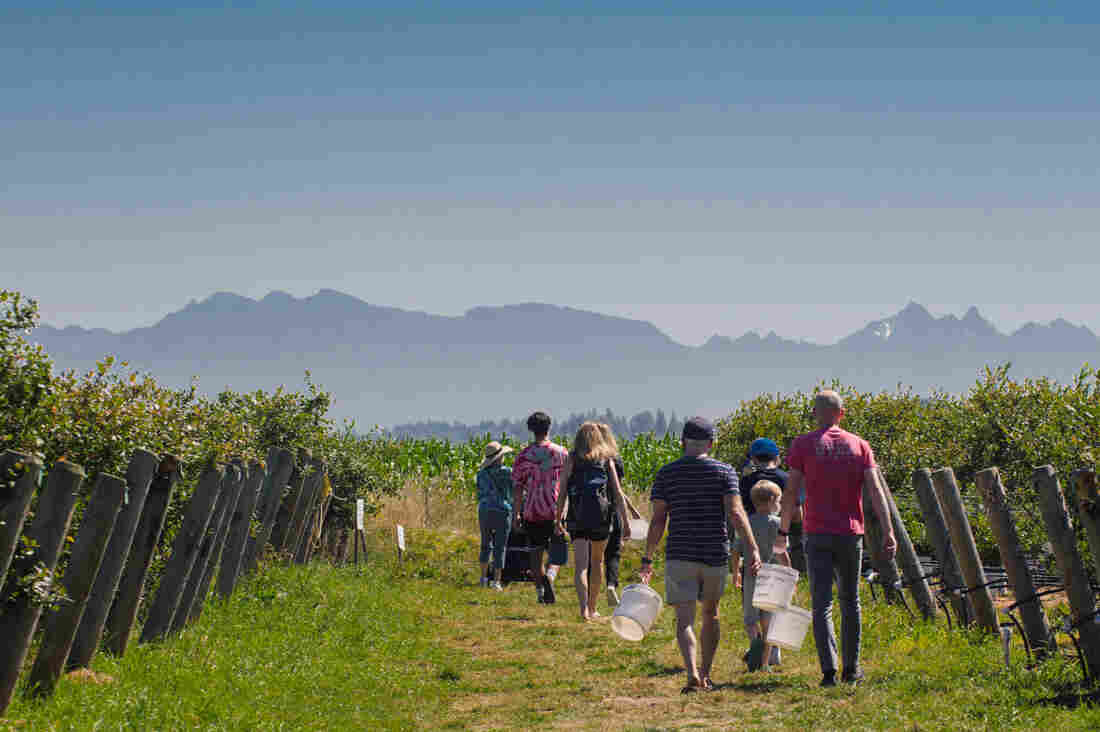 Kasinger spoke to one group of friends who hadn't seen each other in six months, but arranged to meet to go berry picking — from a safe distance.

"They were just stoked to be able to be together in what they felt was a safe environment," she remembers. 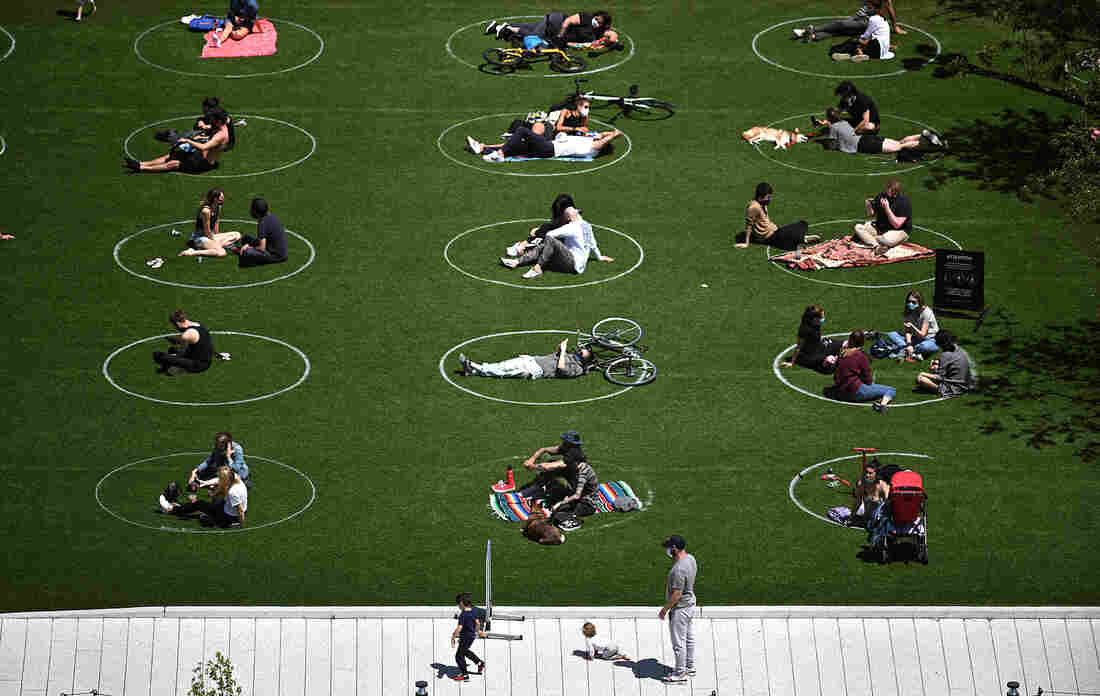 Signs and circles — directing people where to move, stand, or lie down — popped up in many public spaces including in Brooklyn's Domino Park. Johannes Eisele/AFP via Getty Images hide caption 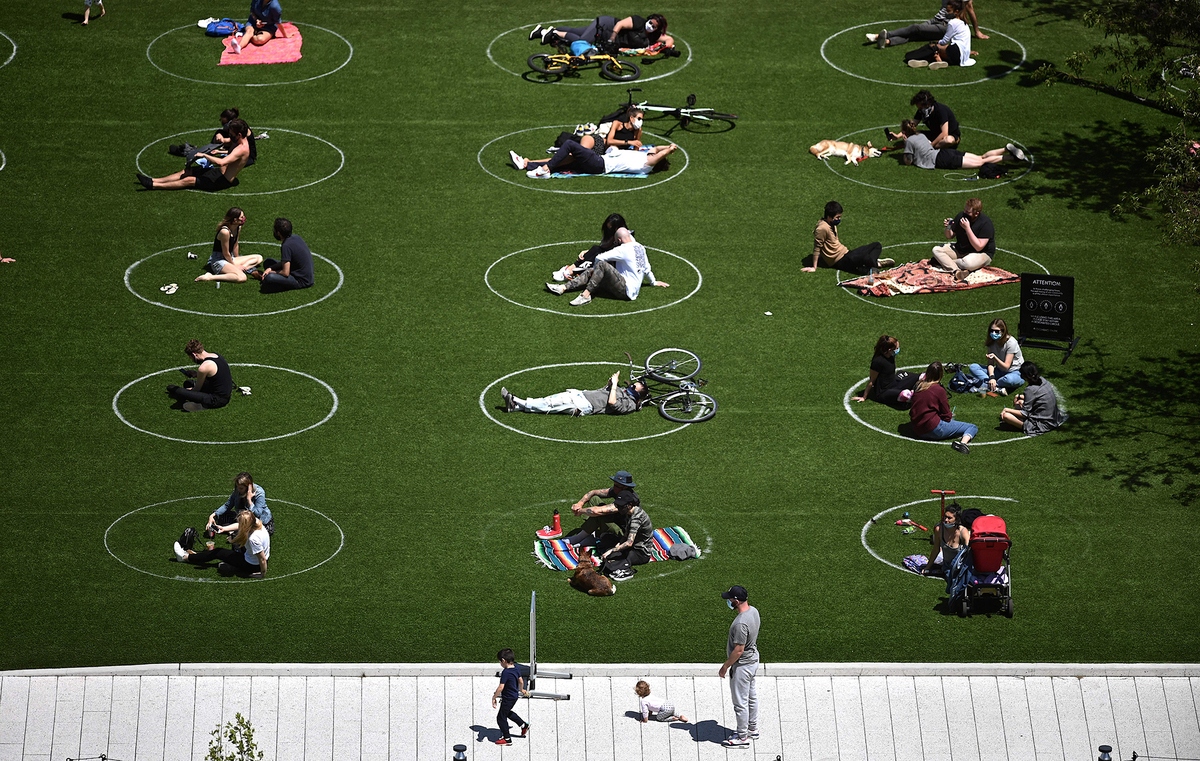 Signs and circles — directing people where to move, stand, or lie down — popped up in many public spaces including in Brooklyn's Domino Park. 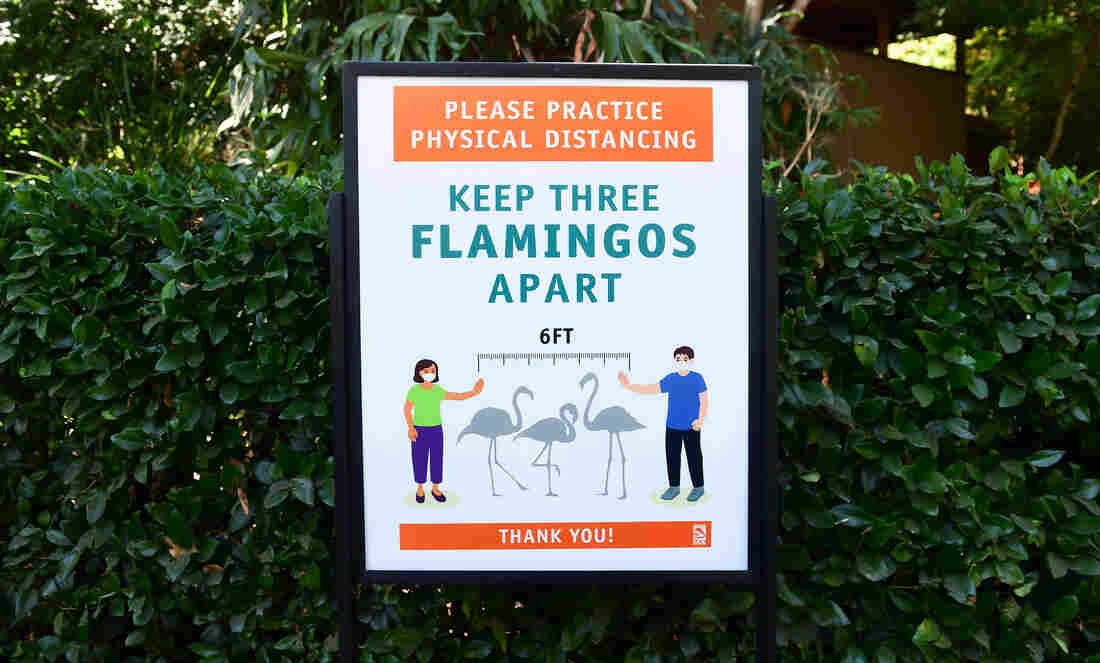 Celebrations And Milestones Get A Socially Distanced Spin 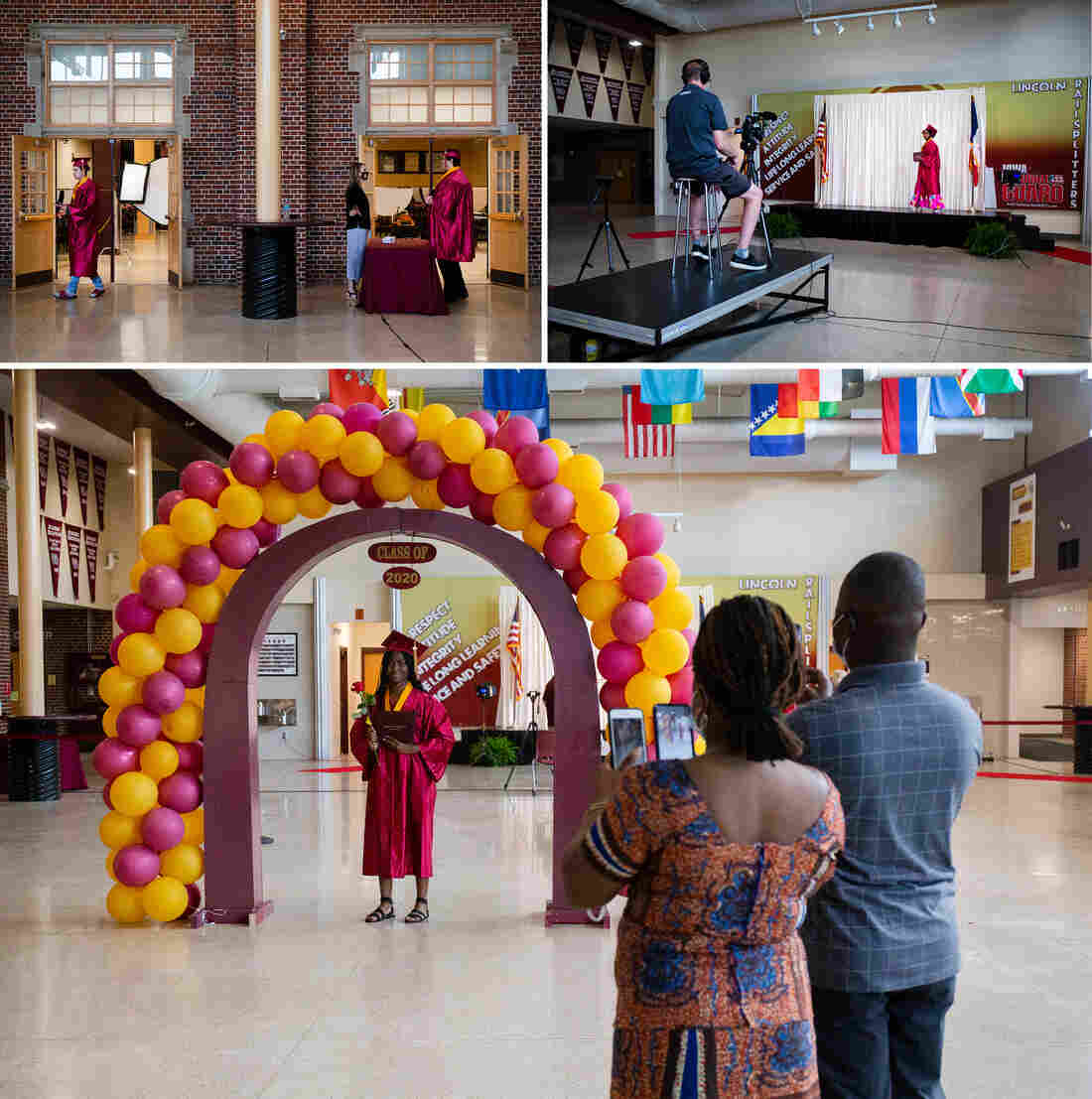 Graduating seniors at Lincoln High School in Des Moines arrived at staggered times over the course of a week in mid-June to receive their diplomas. They were each allowed two guests, who watched them cross an empty stage before the new grads posed for photos.

"Parents frequently looked to the floor for clues on where to stand," recalls Olivia Sun, a visual journalist at the Des Moines Register who covered the event. "There was no restless buzz of graduates waiting to begin a final summer with childhood friends." Without the festivities that usually accompany graduation, the weeklong event felt "more like a streamlined appointment than a celebration," Sun says. 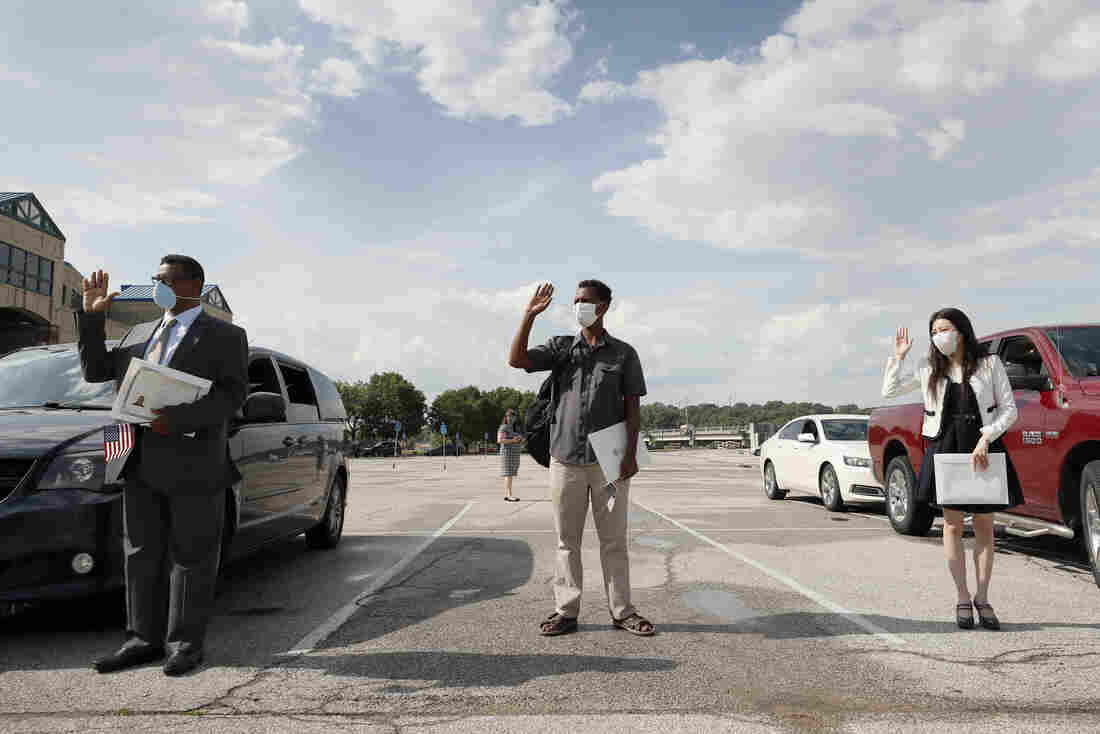 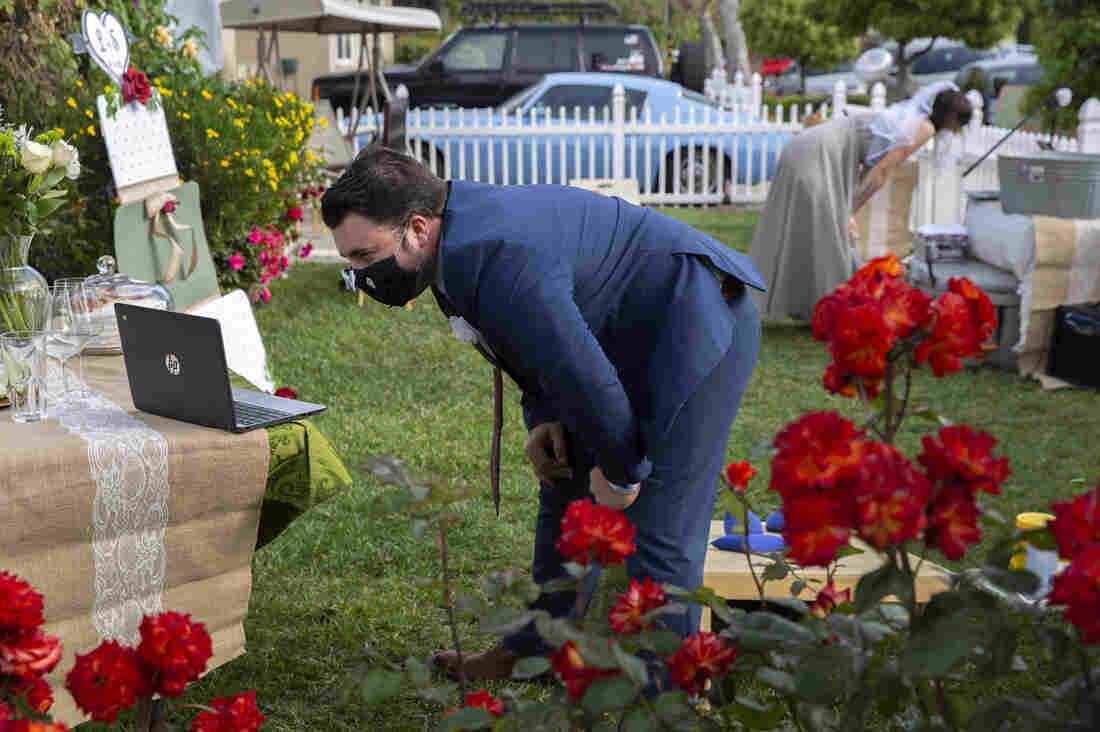 Sean Widger and his fiancé Lindsey Dale joined a video conference call in Livermore, Calif., with family and friends on May 2. The couple postponed their long-planned wedding until after the pandemic's restrictions ease, but decided to host a socially distant "non-wedding reception" this summer. Santiago Mejia/The San Francisco Chronicle hide caption

A Sense Of Community Preserved 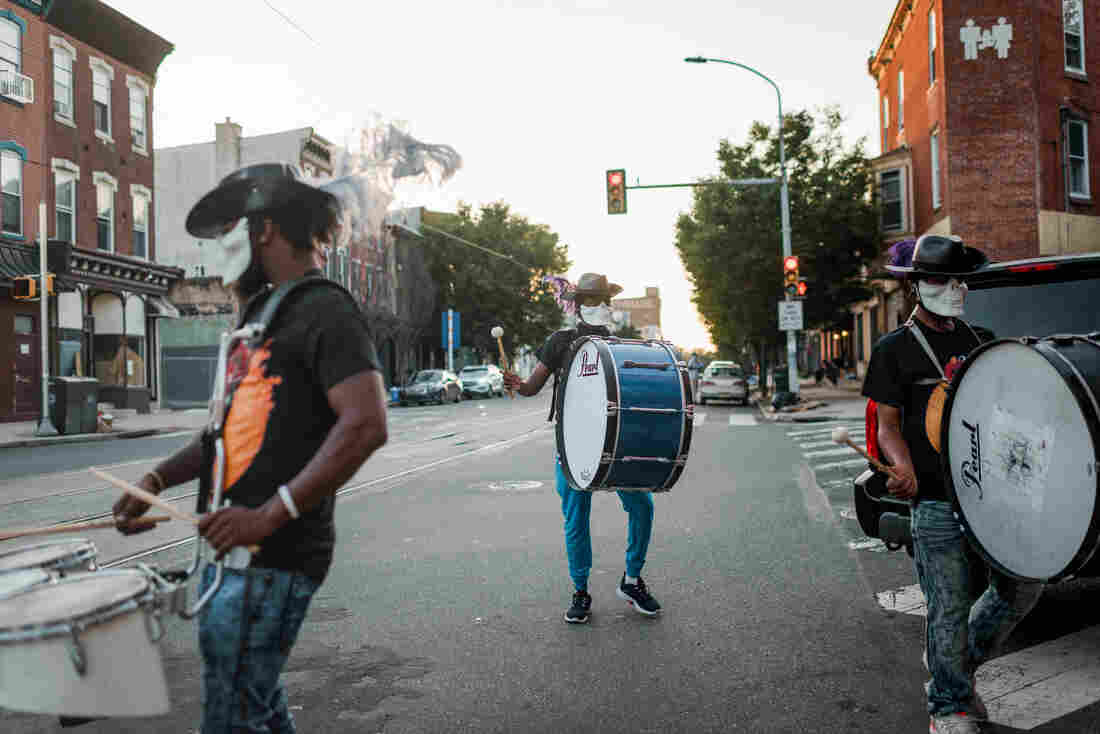 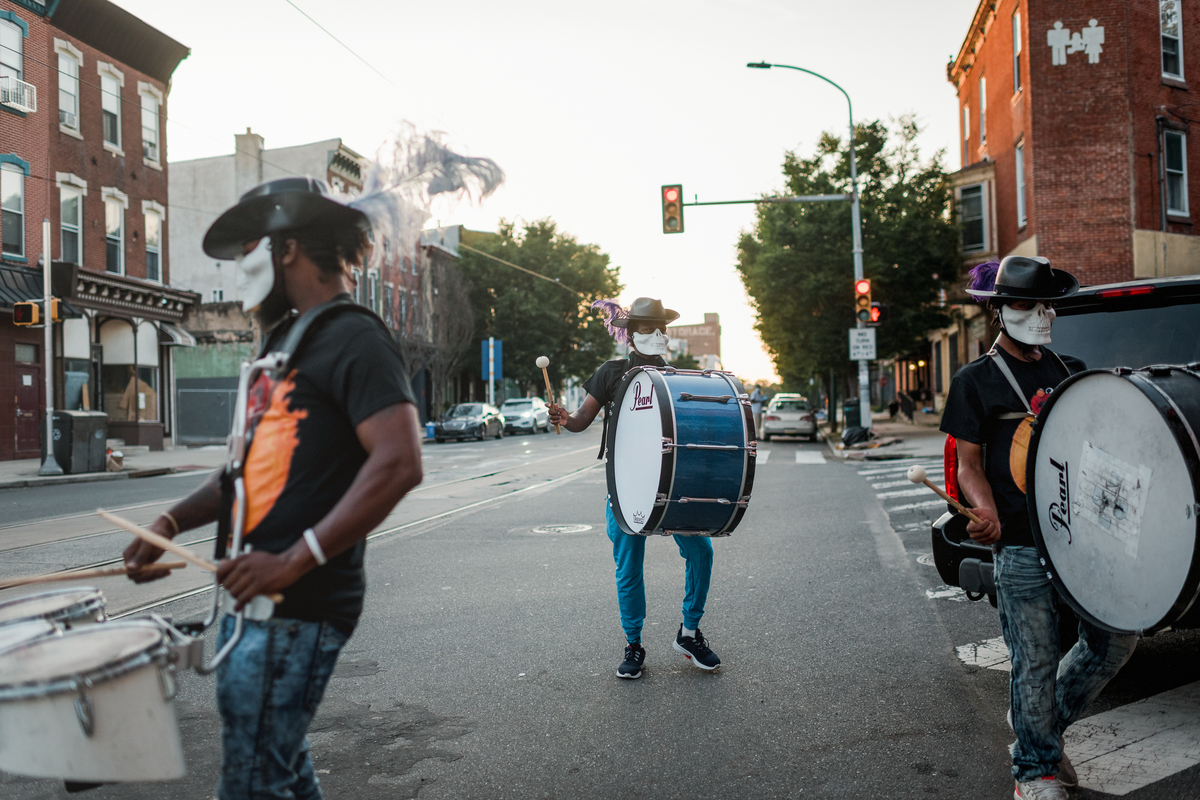 In Philadelphia, photographer Hannah Yoon found Positive Movement, a drumline group, had moved their music and rehearsals outside to be safer. The decision had an unintended effect, giving neighbors — including those confined to home — the opportunity to hear and see the music on the street.

Tony Royster, who started Positive Movement, says the team has been performing since 2014, but expanded their schedule this summer to include drive-by birthday and graduation parties as a way to continue to entertain and lift the community's spirits. 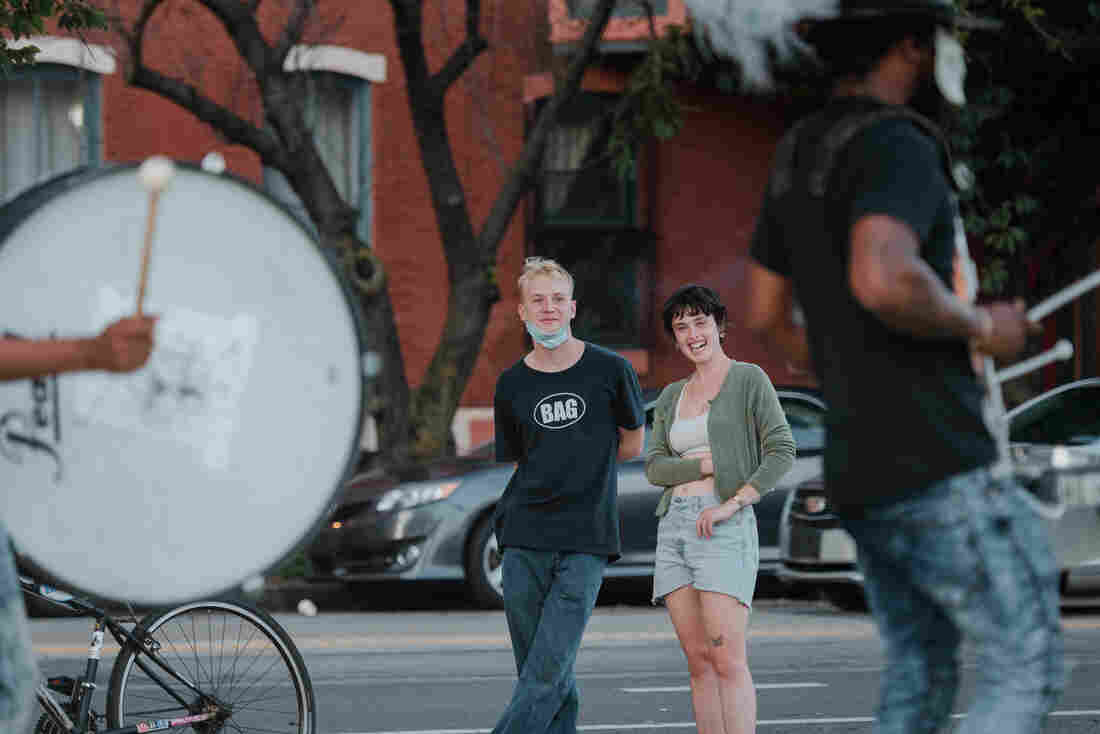 "We heard the drumline from outside the window and had to come check it out," resident Jessica Harmon said on a weeknight in early August when Positive Movement performed as the opening act ahead of an outdoor movie. "We had no idea there would be a movie night set up right across the street," Harmon says.

She ended up staying to watch the film with others in her neighborhood.

The Scribe Video Center's movie screenings travel to neighborhoods in Philadelphia and Camden. The center has been sponsoring screenings for 23 years, and producer Nehad Khader (right) says they wanted to continue the tradition in 2020. So they limited each audience to a scattered 50 people, to accommodate social distancing. Hannah Yoon for NPR hide caption

Nehad Khader, who works with the Scribe Video Center, which puts on the movie nights, says that need for human connection among neighbors was especially profound this summer. The center has hosted outdoor screenings for over two decades. This year, Khader says, every movie night reached maximum capacity.

Friends Nathan Grace, Hana Chamoun, and Anna McCarthy showed up to watch, too. Chamoun, a graduate student and part-time bartender, is now taking virtual classes and relying on unemployment to make ends meet. The past few months have reminded her of the timelessness of summers in elementary school, she says. For Chamoun and her friends, the outdoor event was a welcome chance to escape indoor life and see each other in a safe way.

It was "a sweet treat," McCarthy says. A summer sweetness that transcended even a pandemic. 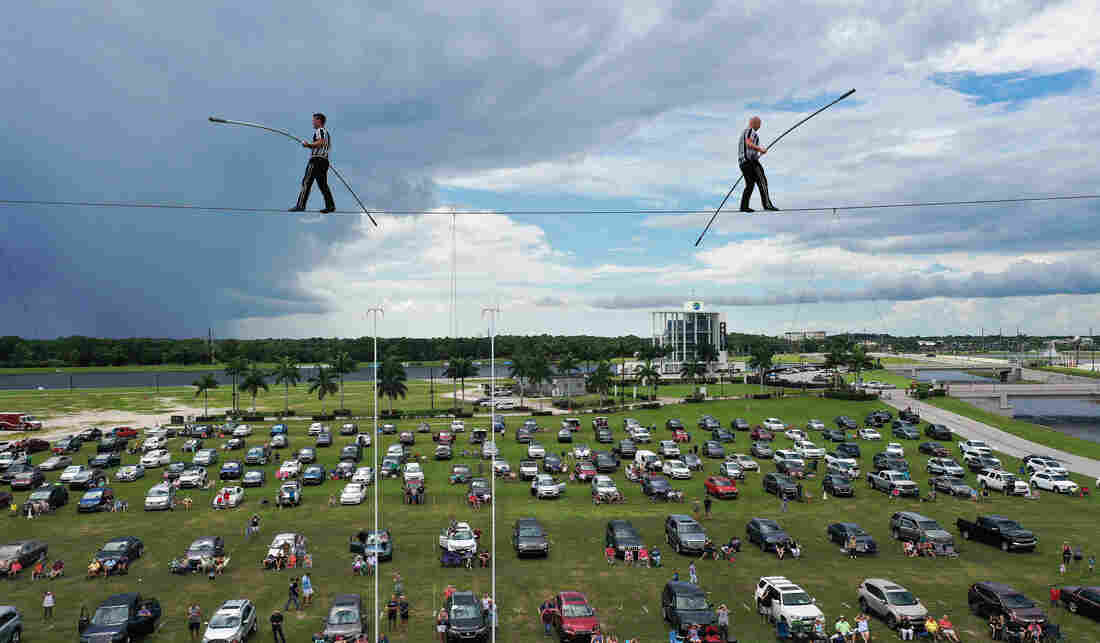