Accessibility links
Musclebound Mice Thrived In Space With The Help Of A Drug : Shots - Health News An experiment involving some "mighty mice" on the International Space Station could someday help astronauts maintain muscle and bone strength on interplanetary journeys. 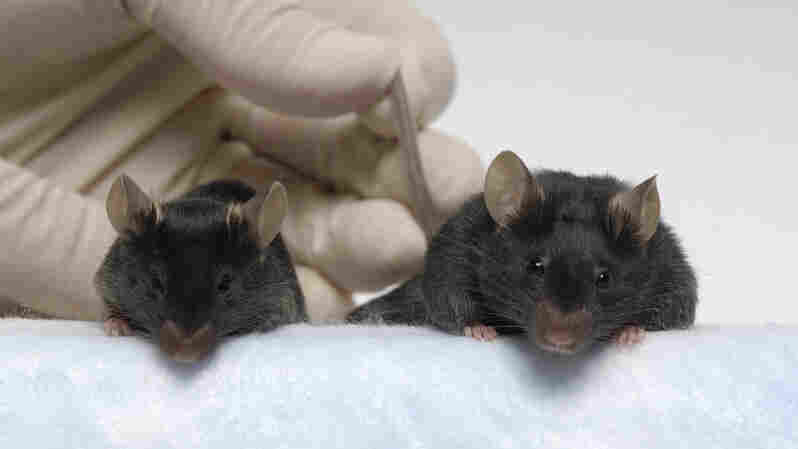 The mouse on the right has been engineered to have four times the muscle mass of a normal lab mouse. A drug to achieve the same effect was recently tested in space. Se-Jin Lee/PLOS One hide caption 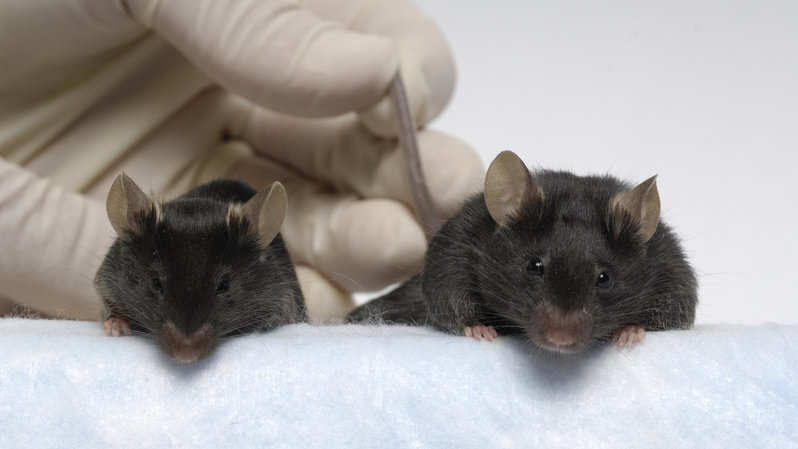 The mouse on the right has been engineered to have four times the muscle mass of a normal lab mouse. A drug to achieve the same effect was recently tested in space.

Some mighty mice have overcome one of the major obstacles to interplanetary space flight: muscle and bone loss.

The mice got a drug that prevented the usual decreases in muscle and bone mass during a month on the International Space Station, a team reports in the journal Proceedings of the National Academy of Sciences.

"The drug was effective not just in preserving the muscle mass and bone mass, but actually caused the muscles and bones to grow," says Dr. Se-Jin Lee, a professor at The Jackson Laboratory and the University of Connecticut.

The mice "had a phenomenal response to the drug without apparently any bad side effects," adds Dr. Emily Germain-Lee, a professor at the University of Connecticut who is a co-author of the paper and married to Lee.

If a drug worked that well in humans, it could help astronauts stay healthy during a voyage to Mars, which could take years.

A human drug also would be a "miracle" for millions of people on Earth who have bones that fracture easily or muscles too weak to allow standing and walking, Germain-Lee says.

Currently, astronauts on the space station exercise two hours a day to preserve muscle and bone mass. It's such a big part of their lives that in April, Jessica Meir and Andrew Morgan made a video of their weightless workout.

But even intense exercise only slows down the loss of muscle and bone mass.

So in December, Lee, Germain-Lee and a team of researchers sent some very special mice into orbit.

Among them were so-called mighty mice, rodents that had been genetically altered to develop twice the usual amount of muscle. The group also included regular mice that received the drug and some others that were just along for the ride.

After reaching the space station, all the mice got lots of exercise.

"Once they get up there they become very active," Lee says. "In fact, they have a name for it, 'racetracking,' because they're running around quite a bit."

After a month in orbit, the mice splashed down off the California coast and were rushed to a lab in San Diego.

Normal mice that did not get the drug lost more than 10% of their muscle mass. But bone loss was an even bigger problem for these animals.

"They lost a substantial amount of bone in space and then, even after being on Earth, they actually continued to lose a little bit more bone mass," Lee says.

Meanwhile, the genetically engineered mighty mice retained their muscle and bone mass, and the mice that got the drug actually added mass. The drug also helped reverse muscle and bone loss in mice that were treated after they returned to Earth.

The drug works by nullifying a regulatory mechanism in the body that usually limits the growth of muscle and bone.

It does this by neutralizing two substances that occur naturally in the body. They're called myostatin, which normally limits muscle growth, and activin A, which regulates the growth of both muscle and bone.

Even before the space station experiment, the approach had been shown to produce spectacular results in mice. But efforts to reproduce these results in people have had mixed results.

The challenge, Lee says, will be to find a version of the drug that builds muscle and bone in people without causing side effects.