Accessibility links
Community Hospitals In Cities Face Escalating Financial Pressures : Shots - Health News Experts fear that the economic pressures of the COVID-19 crisis are helping push some urban hospitals over the edge at the very time they are most needed in low-income communities. 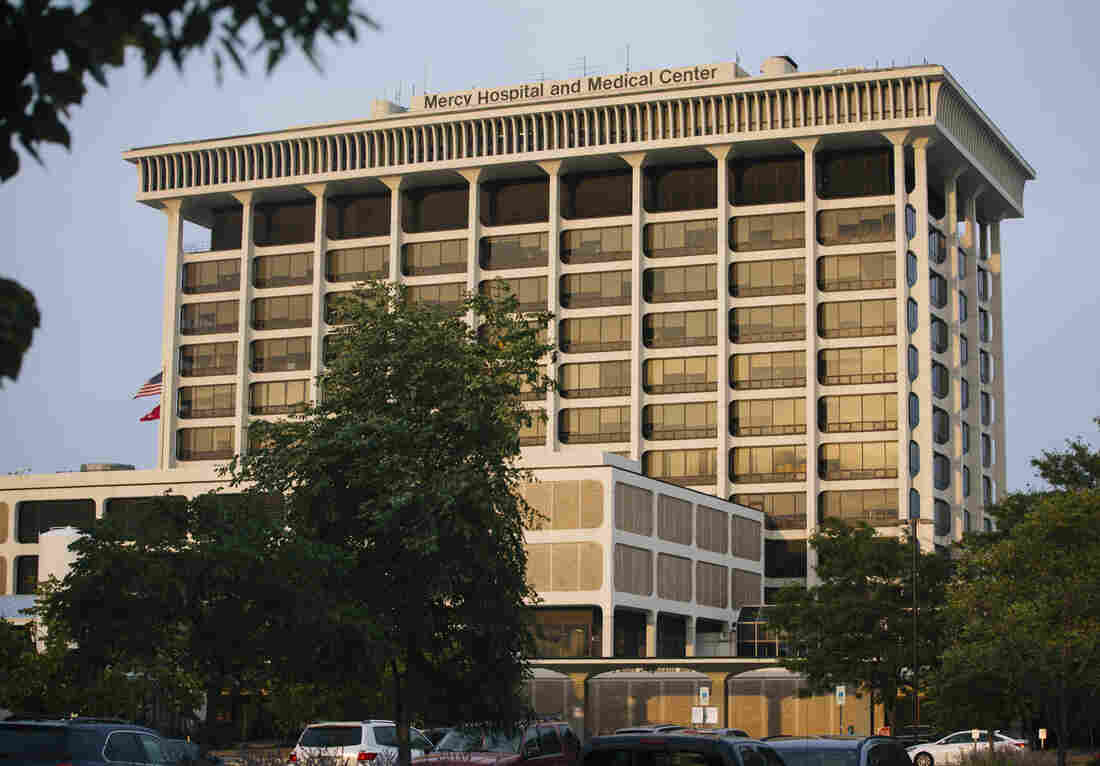 Mercy Hospital & Medical Center survived the Great Chicago Fire of 1871 ― but it lost the battle of modern health care economics. In July, Chicago's first hospital told regulators that it will end inpatient services as soon as February. Taylor Glascock for KHN hide caption 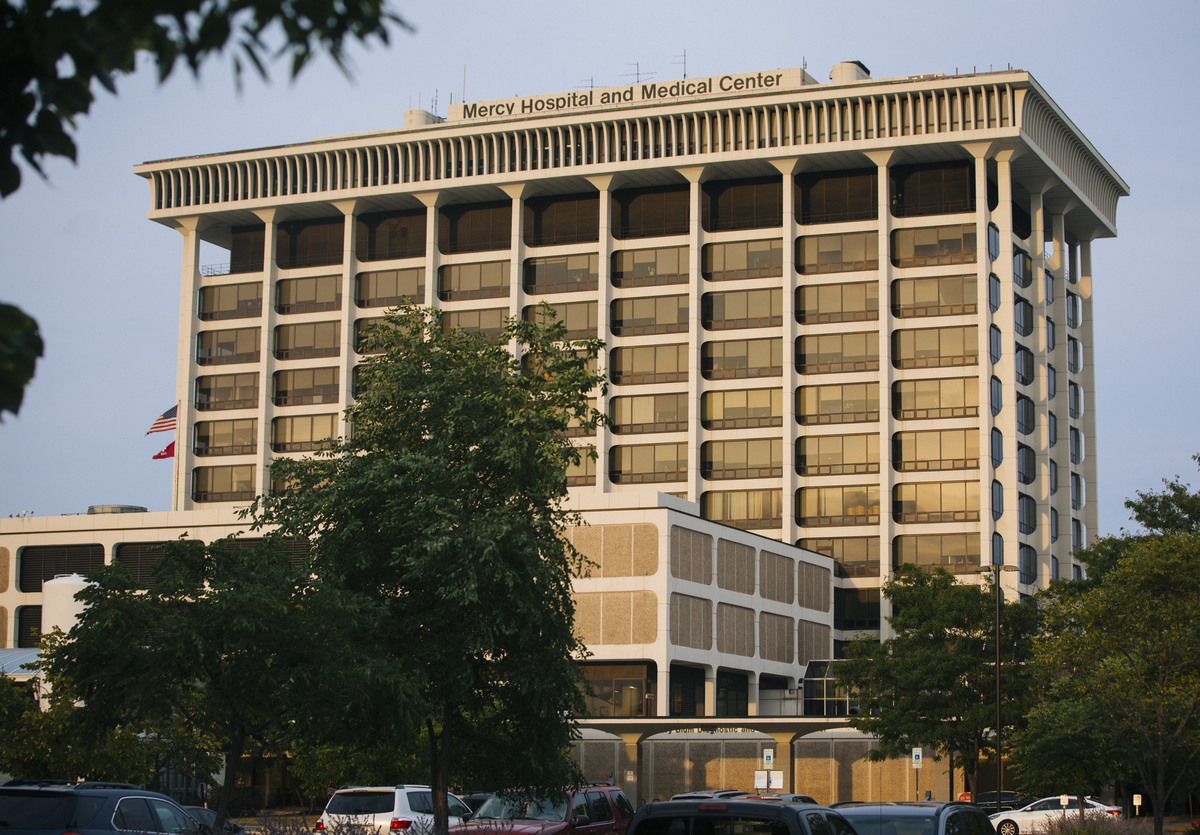 Mercy Hospital & Medical Center survived the Great Chicago Fire of 1871 ― but it lost the battle of modern health care economics. In July, Chicago's first hospital told regulators that it will end inpatient services as soon as February.

Victor Coronado felt lightheaded one morning last month when he stood up to grab an iced tea. The right side of his body suddenly felt heavy. He heard himself slur his words. "That's when I knew I was going to have a stroke," he recalls.

Coronado was rushed to Mercy Hospital & Medical Center, the hospital nearest his home on Chicago's South Side. Doctors there pumped medicine into his veins to break up the clot that had traveled to his brain.

Coronado may outlive the hospital that saved him. Founded 168 years ago as the city's first hospital, Mercy survived the Great Chicago Fire of 1871 but is succumbing to modern economics, which have underfinanced hospitals serving the poor. In July, the 412-bed hospital informed state regulators that it planned to shutter all inpatient services as soon as February.

"If something else happens, who is to say if the responders can get my husband to the nearest hospital?" says Coronado's wife, Sallie.

While rural hospitals have been closing at a quickening pace over the past two decades, a number of inner-city hospitals now face a similar fate. And experts fear that the economic damage inflicted by the COVID-19 pandemic on safety net hospitals and the ailing finances of the cities and states that subsidize them are helping push some urban hospitals over the edge.

By the nature of their mission, safety net hospitals everywhere struggle because they treat a large share of patients who are uninsured — and can't pay bills — or have their care paid by Medicaid, which doesn't cover costs. But metropolitan hospitals confront additional threats beyond what rural hospitals do. State-of-the-art hospitals in affluent city neighborhoods are luring more of the safety net hospitals' best-insured patients.

These combined financial pressures have been exacerbated by the pandemic at a time when these hospitals' role has become more important: Their core patients — the poor and people of color — have been disproportionately stricken by COVID-19 in metropolitan regions like Chicago.

"We've had three hospital closures in the last year or so, all of them Black neighborhoods," says Dr. David Ansell, senior vice president for community health equity at Rush University Medical Center, a teaching hospital on Chicago's West Side. He says the decision to close Mercy "is really criminal in my mind, because people will die as a result."

Mercy is following the same lethal path as did two other hospitals with largely lower-income patient bases that shuttered last year: Hahnemann University Hospital in Philadelphia and Providence Hospital in Washington, D.C., which ended its inpatient services. Washington's only public hospital, United Medical Center — in the city's poorest ward — is slated to close in 2023 as well, and some services are already curtailed. 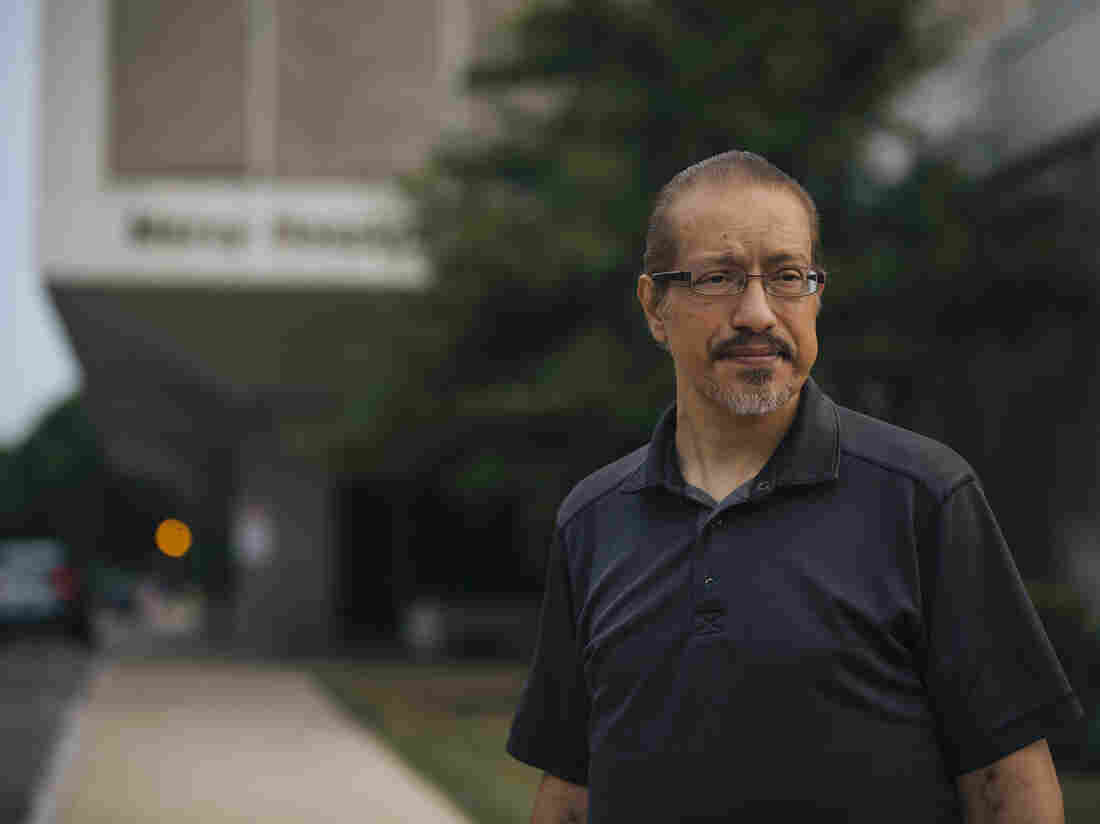 Victor Coronado was rushed to Chicago's Mercy Hospital & Medical Center after exhibiting signs of a stroke. Doctors pumped medicine into his veins and broke the clot that had traveled to his brain. The hospital that saved him is now planning to end inpatient services. Taylor Glascock for KHN hide caption 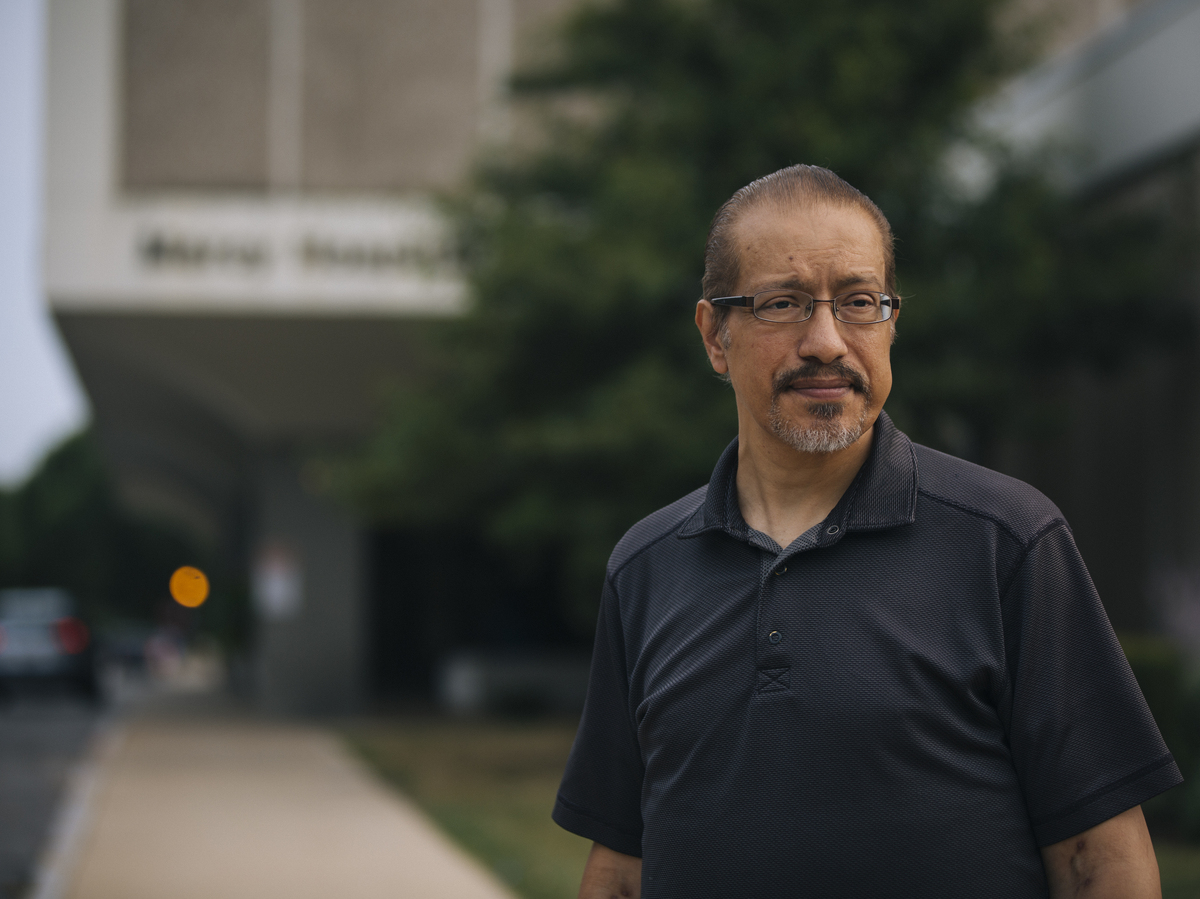 Victor Coronado was rushed to Chicago's Mercy Hospital & Medical Center after exhibiting signs of a stroke. Doctors pumped medicine into his veins and broke the clot that had traveled to his brain. The hospital that saved him is now planning to end inpatient services.

So far, urban hospital closures have remained infrequent compared with the cascading disappearance of their rural counterparts. But the closing of a few could portend problems at others. Even some of those that remain open may cut back crucial specialties like labor and delivery services or trauma care, forcing patients to travel farther for help when minutes can matter.

Nancy Kane, an adjunct professor at the Harvard T.H. Chan School of Public Health, who has studied urban safety net hospital changes since 2010, says, "Some close, but most of them have tried to get into a bigger system and hang on for a few more years until management closes them."

For much of the 20th century, most cities ran their own hospitals to care for the indigent. But after the creation of Medicare and Medicaid, and as the rising cost of health care became a burden for local budgets, many jurisdictions turned away from that model. Today, only 498 of 5,230 general hospitals in the U.S. are owned by governments or a public hospital district.

Instead, many hospitals in low-income urban neighborhoods are run by nonprofits — often faith based — and, in some cases, for-profit corporations. In recent years, owners have unloaded safety net hospitals to entities with limited patience for keeping them alive.

In 2018, the for-profit hospital chain Tenet Healthcare Corp. sold Hahnemann University Hospital in Philadelphia to Joel Freedman, a California private equity investor, for $170 million. A year later, Freedman filed for bankruptcy on the hospital, saying its losses were insurmountable, while separating its real estate, including the physical building, into another corporation, which could ease its sale to developers.

In 2018, Tenet sold another safety net hospital, Westlake Hospital in Melrose Park, Ill., a suburb west of Chicago, to a private investment company. Two weeks after the sale, the firm announced it would close the hospital, which ultimately led the owners to pay Melrose Park $1.5 million to settle a lawsuit alleging they had misled local officials by claiming before the sale that they would keep it open.

Some government-run hospitals are also struggling to stay open. Hoping to stem losses, the District of Columbia outsourced management of United Medical Center to private consulting firms. But far from turning the hospital around, one firm was accused of misusing taxpayer funds, and it oversaw a string of serious patient safety incidents, including violations in its obstetrics ward so egregious that the District was forced to shut down the ward in 2017.

This year, the District struck a deal with Universal Health Services, a Fortune 500 company with 400 hospitals and $11 billion in revenues, to run a new hospital that would replace United, albeit with a third fewer beds. Universal also operates George Washington University Hospital in the city in partnership with George Washington University. That relationship has been contentious: Last year, the university accused the company of diverting $100 million that should have stayed in the medical system. In June, a judge dismissed most of the university's complaint.

No saviors for Mercy

Chicago has three publicly owned hospitals, but much of the care for low-income patients falls on private safety net hospitals like Mercy that are near their homes and have strong reputations. These hospitals have been sources of civic pride as well as major providers of jobs in neighborhoods that have few. 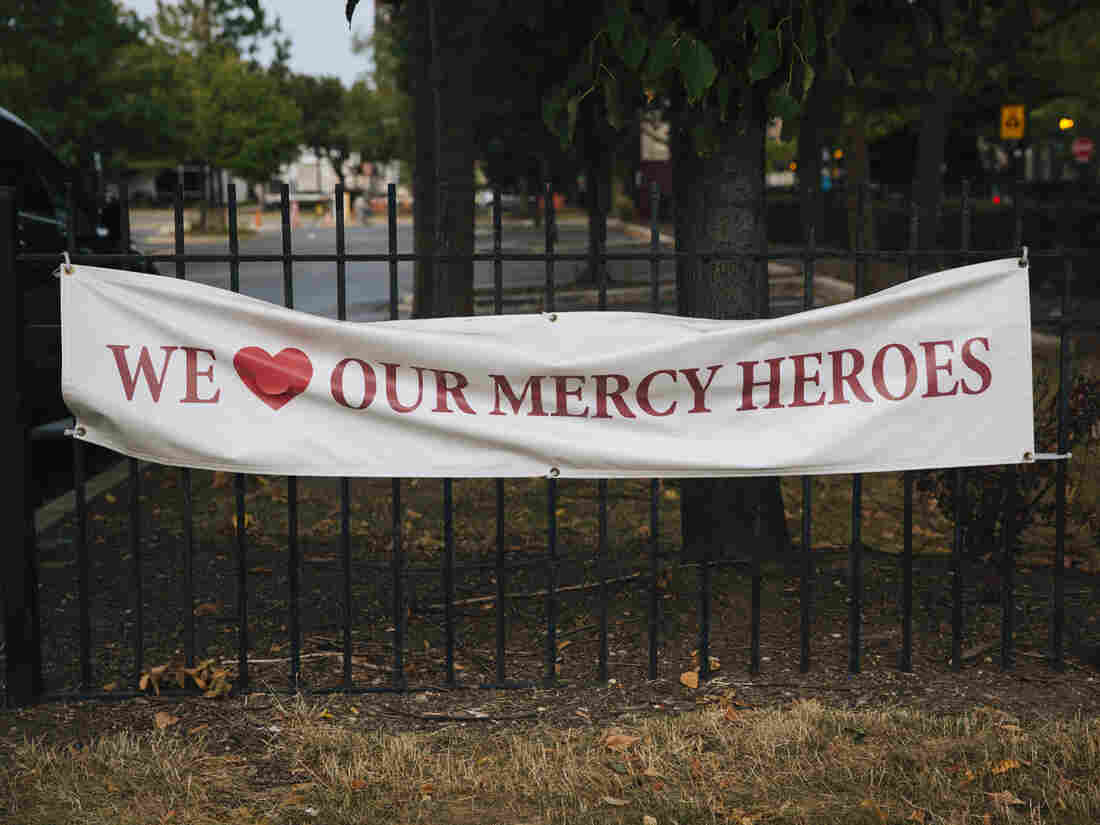 A South Side Chicago institution, Mercy Hospital & Medical Center announced it will end all inpatient services as soon as February 2021. Taylor Glascock for KHN hide caption A South Side Chicago institution, Mercy Hospital & Medical Center announced it will end all inpatient services as soon as February 2021.

Fifty-five percent of Chicagoans living in poverty and 62% of its African American residents live within Mercy's service area, according to Mercy's 2019 community needs assessment, a federally mandated report. The neighborhoods served by Mercy are distinguished by higher rates of death from diabetes, cancer and stroke. Babies are more likely to be born early and at low weight or die in infancy. The nearest hospitals from Mercy can be 15 minutes or more away by car, and many residents don't have cars.

"You're going to have this big gap of about 7 miles where there's no hospital," Ansell says. "It creates a health care desert on the South Side."

Dr. Maya Rolfe, who was a resident at Mercy until July, says the loss of the hospital's labor and delivery department would cause substantial harm, especially since African American women suffer from a higher rate of maternal mortality than do white women. "Mercy serves a lot of high-risk women," she says.

Mercy, a nonprofit, has been in financial trouble for a while. In 2012, it joined Trinity Health, a giant nonprofit Roman Catholic health system headquartered in Michigan with operations in 22 states. Over the next seven years, Trinity invested $124 million in infrastructure improvements and $112 million in financial support.

During that time, the hospital continued to be battered by headwinds facing hospitals everywhere, including the migration of well-reimbursed surgeries and procedures to outpatient settings. Likewise, patients with private insurance, which provides higher reimbursements than government programs do, departed to Chicago's better-capitalized university hospitals, including Rush, the University of Chicago Medical Center and Northwestern Memorial Hospital.

Only 42% of its beds were occupied on average, according to the most recent state data, from 2018. Mercy told state regulators that it is losing $4 million a month and requires at least $100 million in additional building upgrades to operate safely.

Trinity said it spent more than a year shopping for a buyer. After that yielded no success, Mercy joined forces with three other struggling South Side hospitals to consolidate into a single health system planning to build one hospital and a handful of outpatient facilities to replace their antiquated buildings. They sought state financial help.

The plan would have cost $1.1 billion over a decade. At the close of the legislative session, Illinois lawmakers — already strapped for funding because of the economic effects of the pandemic — balked at the hospitals' request for the state to cover half the cost. Lamont Robinson, a Democratic state representative whose district includes Mercy Hospital, says that was because the group did not declare where the new hospital would be built.

"We were all supportive of the merger but not with the lack of information," Robinson says.

Mercy said in an email that the location would have been chosen after the hospital organizations combined and chose new leaders. Trinity said in a statement: "We are committed to continuing to serve the Mercy Chicago community through investment in additional ambulatory and community-based services that are driven by high-priority community needs."

Blame for Mercy's closure has been spread widely to include the city and state governments as well as Mercy's owner. Trinity Health had $8.8 billion in cash and liquid investments at the end of March and, until the pandemic hit, had been running a slight profit. This year in Philadelphia, Trinity Health announced it would phase out inpatient services at another of its safety net hospitals, Mercy Catholic Medical Center-Mercy Philadelphia Campus, a 157-bed hospital that has been around since 1918.

"People put their money where they want to," says Rolfe, the former medical resident at Mercy in Chicago. The city has no qualms about spending large sums to beautify its downtown, she notes, while other neighborhoods are in danger of losing a major institution: "It shows to me that those patients are not that important as patients that exist in other communities."

KHN (Kaiser Health News) is a nonprofit news service covering health issues. It is an editorially independent program of KFF (Kaiser Family Foundation), which is not affiliated with Kaiser Permanente.

An earlier version of this story said that George Washington University Hospital was part of a deal with the District of Columbia to build a new hospital in Washington, D.C. While GWU Hospital was originally involved in the plan, the District's ultimate deal was with Universal Health Services, the company that operates GWU Hospital.