Accessibility links
What Now For The Affordable Care Act In A Supreme Court Without RBG? : Shots - Health News The death of Justice Ruth Bader Ginsburg comes just as the Supreme Court was about to hear a case challenging the ACA. It could end Medicaid expansion and protections for preexisting conditions. 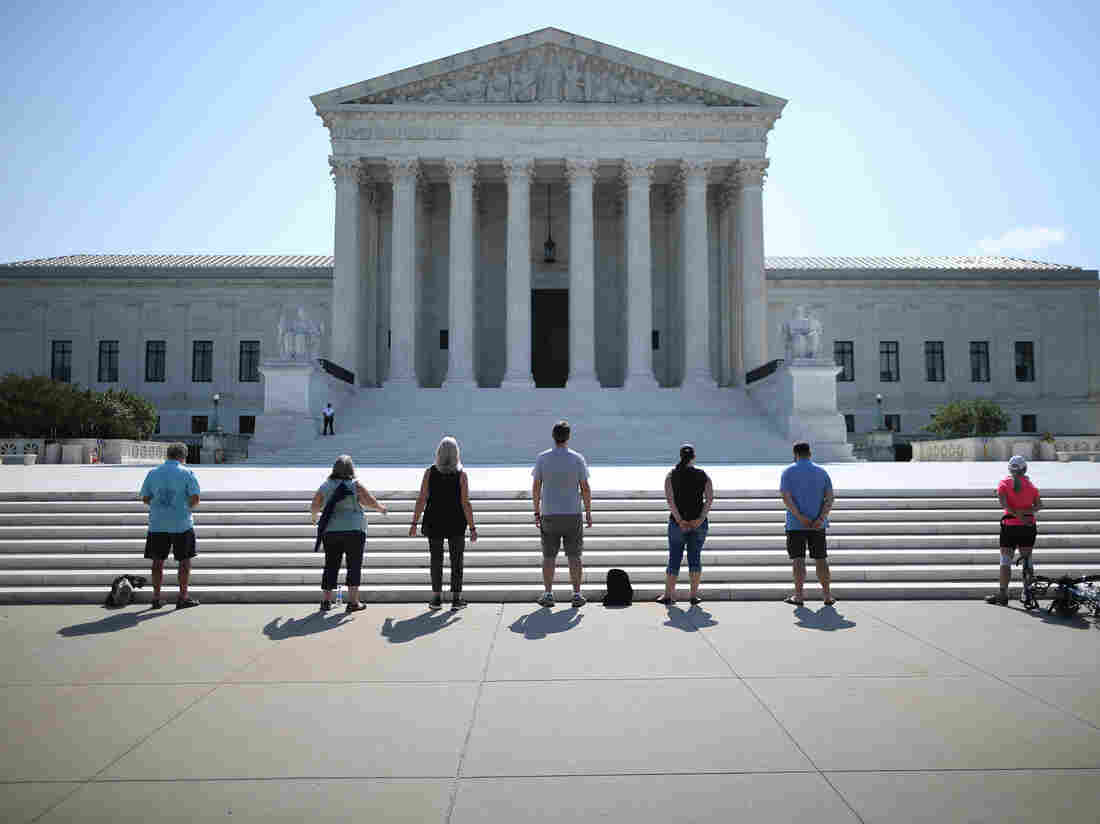 Demonstrators pray in front of the U.S. Supreme Court on July 8, a day the court ruled that employers with religious objections can decline to provide contraception coverage under the Affordable Care Act. With the death of Ruth Bader Ginsburg, the ACA's future is in doubt. Chip Somodevilla/Getty Images hide caption 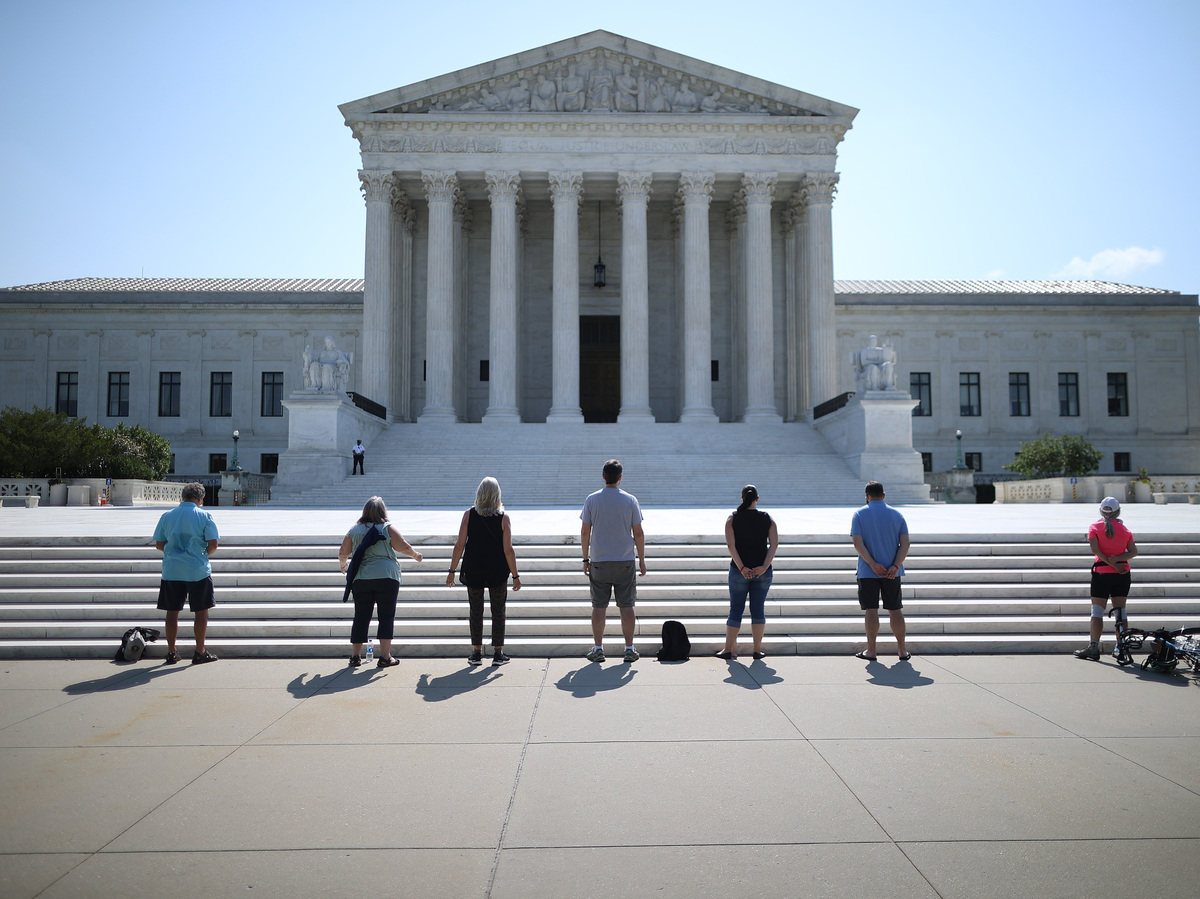 Demonstrators pray in front of the U.S. Supreme Court on July 8, a day the court ruled that employers with religious objections can decline to provide contraception coverage under the Affordable Care Act. With the death of Ruth Bader Ginsburg, the ACA's future is in doubt.

The death of Supreme Court Justice Ruth Bader Ginsburg has raised the profile of a case that marks the latest existential threat to the Affordable Care Act. The Supreme Court is scheduled to hear the case the week after the general election in November.

Democrats are raising alarms about the future of the law without Ginsburg. House Speaker Nancy Pelosi, speaking on ABC's This Week Sunday morning, said that part of the strategy by President Trump and Senate Republicans to quickly fill Ginsburg's seat is to help undermine the ACA.

Among other things, the Affordable Care Act now dangles from a thread.

Ginsburg's death throws an already chaotic general election campaign during a pandemic into more turmoil. But in the longer term, her absence from the bench could accelerate a trend underway to get certain cases to the Supreme Court with the aim of invalidating the ACA.

The ACA under fire — again

A coalition of Republican state attorneys general, led by Texas, argued in February 2018 that the Republican-backed tax-cut law of December 2017 had rendered the ACA unconstitutional by reducing to zero the ACA's penalty for not having insurance. They based their argument on Chief Justice John Roberts' 2012 conclusion that the ACA was valid, interpreting that penalty as a constitutionally appropriate tax.

Most legal scholars, including several who challenged the law before the Supreme Court in 2012 and again in 2015, find unconvincing the argument that the entire law should fall. "If courts invalidate an entire law merely because Congress eliminates or revises one part, as happened here, that may well inhibit necessary reform of federal legislation in the future by turning it into an 'all or nothing' proposition," wrote a group of conservative and liberal law professors in a brief filed in the case.

Still, in December 2018, U.S. District Judge Reed O'Connor in Texas accepted the GOP argument and declared the law unconstitutional. In December 2019, a three-judge 5th Circuit appeals court panel in New Orleans agreed that without the penalty the requirement to buy insurance is unconstitutional. But it sent the case back to O'Connor to suggest that perhaps the entire law need not fall.

Not wanting to wait the months or years that reconsideration would take, Democratic attorneys general defending the ACA asked the Supreme Court to hear the case this year. (Democrats are defending the law in court because the Trump administration decided to support the case from the GOP attorneys general.) The court agreed to take the case but scheduled arguments for the week after the November election.

While the fate of the ACA was, and is, a live political issue, few legal observers have been terribly worried about the legal outcome of the case now known as California v. Texas, if only because the case seemed much weaker than the 2012 and 2015 cases in which Roberts joined the court's four liberals. In the 2015 case, which challenged the validity of federal tax subsidies helping millions of Americans buy health insurance on the ACA's marketplaces, both Roberts and now-retired Justice Anthony Kennedy voted to uphold the law.

But without Ginsburg, the case could wind up in a 4-4 tie, even if Roberts supports the law's constitutionality. That could let the lower-court ruling stand, although it would not be binding on other courts outside the 5th Circuit.

The court could also put off the arguments or, if the Republican Senate replaces Ginsburg with another conservative justice before arguments are heard, Republicans could secure a 5-4 ruling against the law.

Some court observers argue that Justice Brett Kavanaugh has not favored invalidating an entire statute if only part of it is flawed and might not approve overturning the ACA.

Still, what started out as an effort to energize Republican voters for the 2018 midterms after Congress failed to "repeal and replace" the health law in 2017 could end up throwing the nation's entire health system into chaos.

At least 20 million Americans — and likely many more who sought coverage since the start of the coronavirus pandemic — who buy insurance through the ACA marketplaces or have Medicaid through the law's expansion could lose health coverage right away. Many millions more would lose the law's popular protections that guarantee coverage for people with preexisting health conditions, including those who have had COVID-19.

Adult children under age 26 would no longer be guaranteed the right to remain on their parents' health plans, and Medicare patients would lose enhanced prescription drug coverage. Women would lose guaranteed access to birth control at no out-of-pocket cost.

But a sudden elimination would affect more than just patients. Insurance companies, drug companies, hospitals and doctors all have changed the way they do business because of incentives and penalties in the health law. If it's struck down, many of the "rules of the road" would be wiped away, including billing and payment mechanisms.

A new Democratic president could not drop the lawsuit, because the Trump administration is not the plaintiff (the GOP attorneys general are). But a Democratic Congress and president could in theory make the entire issue go away by reinstating the penalty for failure to have insurance, even at a minimal amount. For now, however, nothing is a sure thing as far as the health law goes.

As Nicholas Bagley, a law professor at the University of Michigan who specializes in health issues, tweeted: "Among other things, the Affordable Care Act now dangles from a thread."

KHN is a nonprofit news service covering health issues. It is an editorially independent program of the Kaiser Family Foundation that is not affiliated with Kaiser Permanente.