Accessibility links
CDC Advisory Group Debates Who Would Get A COVID-19 Vaccine First : Shots - Health News A CDC advisory committee is debating this issue Tuesday. Half of U.S. adults could be considered high priority, yet the initial supply is likely to be only enough for 3% to 5% of the population. 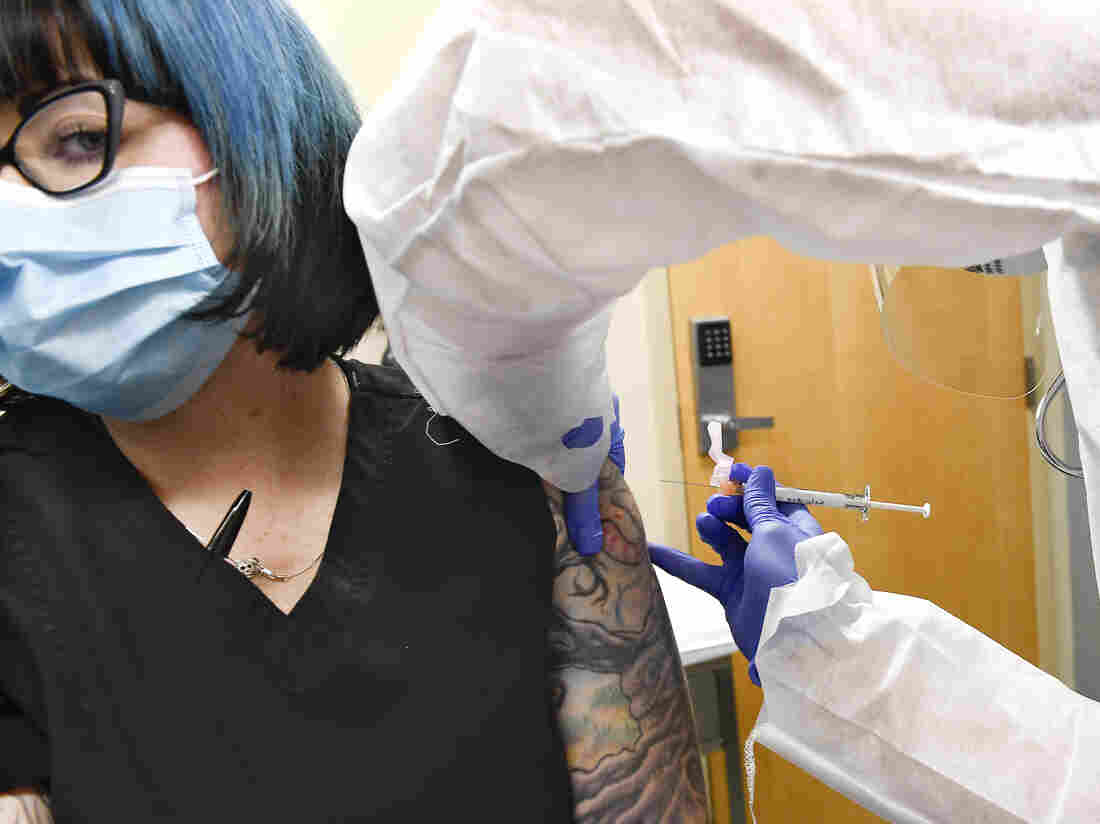 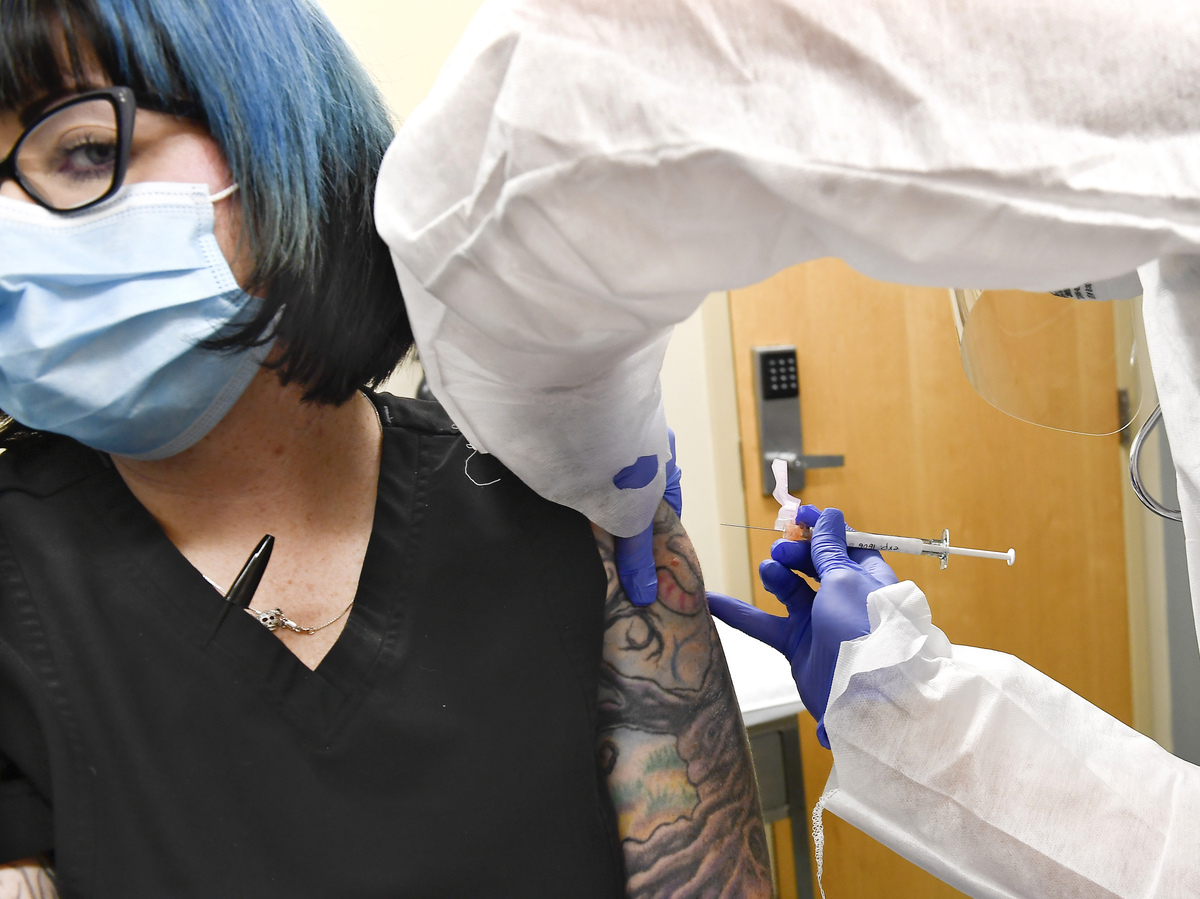 Nurse Kathe Olmstead (right) gives volunteer Melissa Harting an injection in a study of a possible COVID-19 vaccine developed by the National Institutes of Health and Moderna Inc.

It's still unknown when a COVID-19 vaccine might be available in the United States. But when one is first approved, there may only be 10 million to 15 million doses available, which may be enough to cover around 3% to 5% of the U.S. population. That's according to estimates from Operation Warp Speed, the government's vaccine project, published in a draft framework from the National Academies of Sciences, Engineering and Medicine.

There are many who would benefit from the protection a safe and effective vaccine would afford; policymakers must decide who gets the vaccine first.

A vaccine advisory group to the Centers for Disease Control and Prevention is meeting Tuesday to consider how to prioritize distribution of a future COVID-19 vaccine. But a vote on who will get a vaccine first, originally planned for Tuesday, has been delayed.

Priority groups include "those who have the highest risk of exposure, those who are at risk for severe morbidity and mortality ... [and also] the workforce that's needed for us to maintain our both health and economic status," said Dr. Grace Lee, a pediatrics professor at Stanford Children's Hospital and a member of the CDC's Advisory Committee on Immunization Practices or ACIP. Lee spoke for herself, not the committee.

When you add all the priority groups together, they account for half of all U.S. adults, according to Dr. Kathleen Dooling, a CDC co-lead on the ACIP COVID-19 Vaccines Working Group, presenting at ACIP's August meeting. That's far more than can be accommodated initially.

The general consensus among bioethicists is that the first doses should go to front-line health workers. "Obviously they are being placed at high risk of infection, because they're taking care of people who are infected and infectious," said Ruth Faden, founder of the Berman Institute of Bioethics at Johns Hopkins, and a consultant to the World Health Organization on COVID-19 vaccine guidelines.

But even within this seemingly clear category, there are questions about who a front-line health worker is. The definition extends beyond doctors and nurses to encompass hospital staff who care for and clean up after COVID-19 patients, nursing home workers and possibly pharmacy staff and emergency medical responders, according to preliminary guidelines from the CDC. Morticians and funeral home workers may also qualify, according to a draft report from the National Academies of Sciences, Engineering and Medicine, because they handle COVID-19 victims' bodies.

"Health care worker vaccination sounds simple, but if we don't have enough doses, we still have to be really judicious in how we're implementing," Lee said. If everyone who might qualify as a health worker exceeds the initial supply, state and local authorities might have to ration distribution further — for instance, restricting the vaccine to parts of a state that are being hit the hardest.

And that's just for the first 10 million to 15 million doses.

In the weeks after a vaccine is approved, manufacturing should kick into gear and more vaccines should be available. So who should get it next?

Does it go to essential workers, who keep the buses running and the grocery shelves stocked? Does it go to the elderly, or people with preexisting conditions, who are more likely to get sick?

A lot of the decisions will depend on the characteristics of the vaccine itself.

"These recommendations are not in a vacuum. They are meant for the real world. And I think that's what makes it so complex," Lee said. Factors still unknown include who a vaccine is most effective for, who can reasonably access the vaccine and whether people will line up in droves to get it.

But even if you're a healthy adult cloistered in your house, waiting out the pandemic, the line for a vaccine isn't expected to last forever.

"In a reasonable amount of time, if all goes well, we will have enough vaccine for everyone in the country who wants one," Faden said. The National Academies of Sciences, Engineering and Medicine suggests that a vaccine could be available to all Americans within 12 to 18 months of its approval.

Several organizations have produced reports on prioritizing vaccine distribution, but it's the CDC and its advisory committee that have the greatest influence over how a vaccine is used and distributed in the U.S. by health departments, hospitals and doctors' offices.

When ACIP does vote, the committee's advice will provide critical information that state and local health agencies will use to figure out whom to give the first vaccines to and how to reach them.