Accessibility links
Coronavirus Data By Race: Understanding The Disparities : Shots - Health News With more complete racial data for COVID-19 available, the trends are impossible to ignore: Minorities are getting sick and dying at disproportionate rates. Here's a state-by-state analysis. 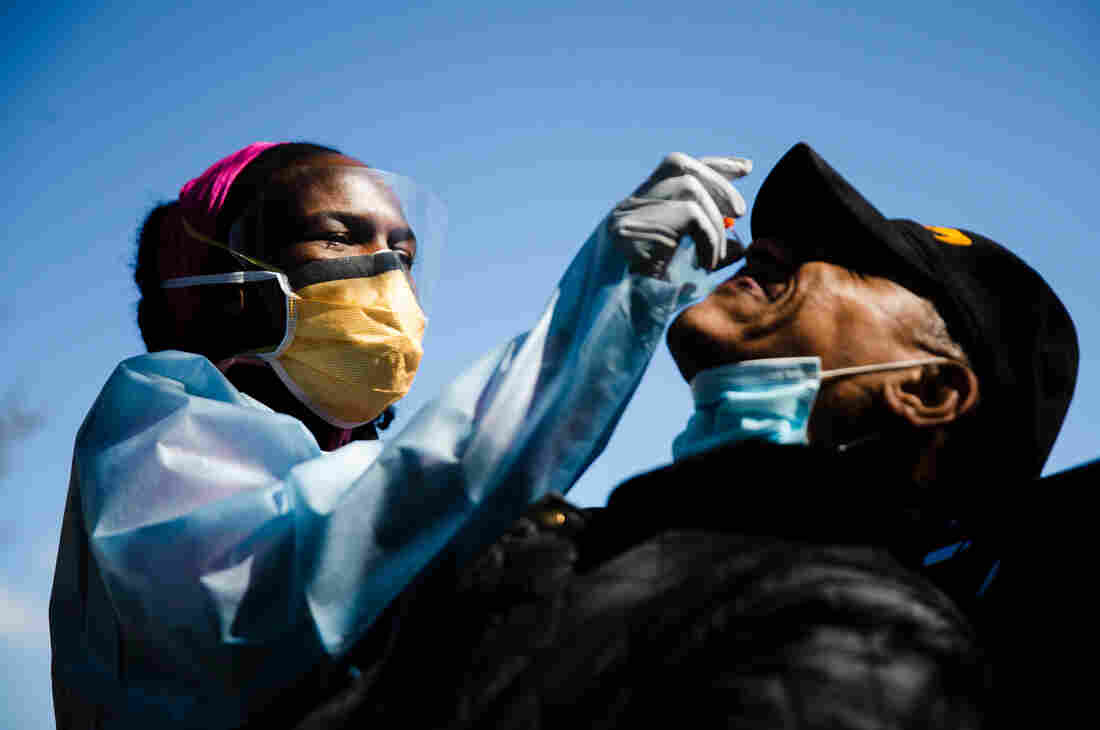 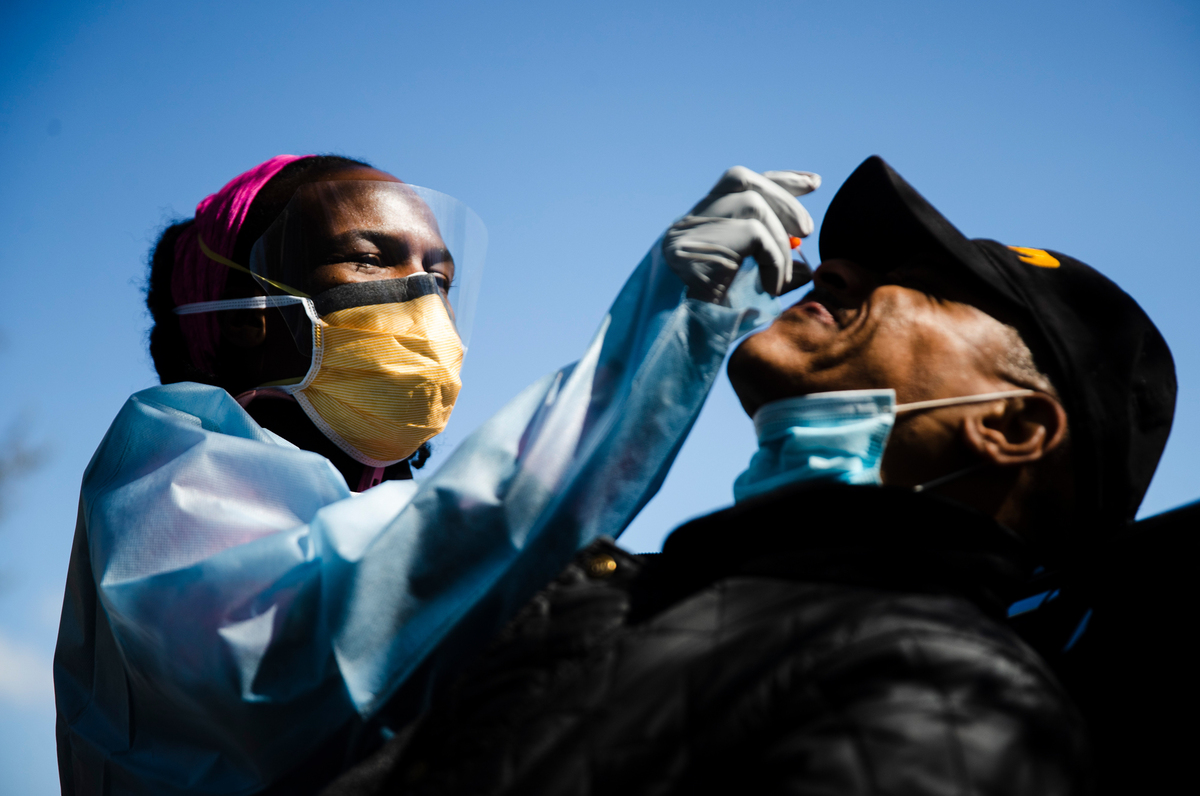 Dr. Ala Stanford administers a COVID-19 test in Philadelphia. Stanford and other doctors formed the Black Doctors COVID-19 Consortium to help address the pandemic's heath disparities.

Data gathered early in the pandemic showed that communities of color are disproportionately affected by COVID-19 across the United States. But incomplete data left a muddy picture of these disparities.

Today, as the U.S. has surpassed 200,000 COVID-19 deaths, and reached nearly 7 million confirmed cases, racial data is more complete, and the trend is crystal clear: People of color get sick and die of COVID-19 at rates higher than whites and higher than their share of the population.

The trend has persisted — and in some cases worsened — since NPR analyzed this data in May. As the country struggles to bring the pandemic under control, Blacks, Latinos and Native Americans bear an unequal burden

An NPR analysis of the latest data available from the COVID Tracking Project shows how this plays out state by state. (Jump to charts below to look up your state). Here are the key findings of the national picture:

As the months have passed, the availability of statewide race and ethnicity data has increased dramatically. When NPR first reported on this issue in May, only 51% of cases and 88% of deaths had an identified race. Since then, 65% of new cases have an identified race, and states have been working to identify the race of deaths previously recorded without a race.

Researchers who have been tracking racial disparities in COVID-19 outcomes since early in the pandemic say these trends are now impossible to ignore.

Samantha Artiga, director of the Disparities Policy Project at Kaiser Family Foundation, recently published a distillation of a wide range of research on these racial disparities.

"When you look at that continually growing body of research, the findings very consistently show that people of color are really bearing the heaviest burden of COVID-19 at every stage, from risk of exposure, to access to testing, to severity of the illness and eventually death," she says.

And these trends are confirmed wherever COVID and race data are collected.

Increasingly, the CDC has provided a variety of race and ethnicity data, something it was slow to do initially. On August 18, the CDC released data showing that Blacks, Latinos, and American Indians are experiencing hospitalizations at rates 4.5 to 5.5 times higher than non-Hispanic whites.

The COVID Racial Data Tracker did an analysis comparing white death rates to other groups. Hispanics and Native Americans are both dying about 1.5 times the rate of white people. And African Americans are dying at 2.4 times the white rate.

NPR's analysis shows that nationally, this death rate is still the highest of any group, despite modest improvements since May. Blacks continue to be over-represented in deaths in 33 states and territories. In May, death rates in 9 states were more than double their population share. As of late September, they are double in only four states.

COVID-19 related deaths among Hispanics and Latinos are cause for increasing concern. In May, the national death rate for Latinos was below their proportion of the population, but it has steadily crept up. There are now 20 states where the number of Hispanic deaths is greater than their share of the population, up from just seven in May.

"I think this really reflects the shifting of hotspots into Southern and Western regions of the country where Hispanic people make up a greater share of the population," says Artiga.

Meanwhile, these communities test positive for COVID-19 at disproportionate rates in almost every state.

For American Indians and Alaska Natives, the picture has become clearer as data becomes available and sample sizes grow. At least 19 states have disproportionately high cases for AIAN individuals and 15 states have disproportionately high death rates. In Arizona, over 500 Native Americans have died from COVID-19, 12% of the state's overall tally. Only 4.5% of the population of Arizona is Native American.

Behind all these disparities lies an even deeper, entrenched problem of health inequity in our society, explains Greg Millet, director of public policy at amfAR.

"It's not by dint of circumstance or luck that predominantly white counties — by and large — have not had as many diagnoses as compared to more diverse counties," he says. "There's a systemic issue that's underlying all of this."

As the pandemic stretches on — and these trends continue — the people meticulously collecting this information are fighting to keep perspective.

"At the end of the day, these numbers are huge, but each number is a human life lost or affected by this," says Rachel Lee, project manager at the COVID Racial Data Tracker. "These are actually people, family members and friends being killed."

"I pray [whenever] our data shifts — 'help me to see the people behind these numbers' — because otherwise, they're just going to be numbers."