Accessibility links
Americans Report Burning Through Savings, Struggling To Pay Rent And Buy Food : Shots - Health News One in six households reported missing or delaying paying bills just so they could buy food, an NPR poll says. And many are having trouble paying the rent, especially African Americans and Latinos. 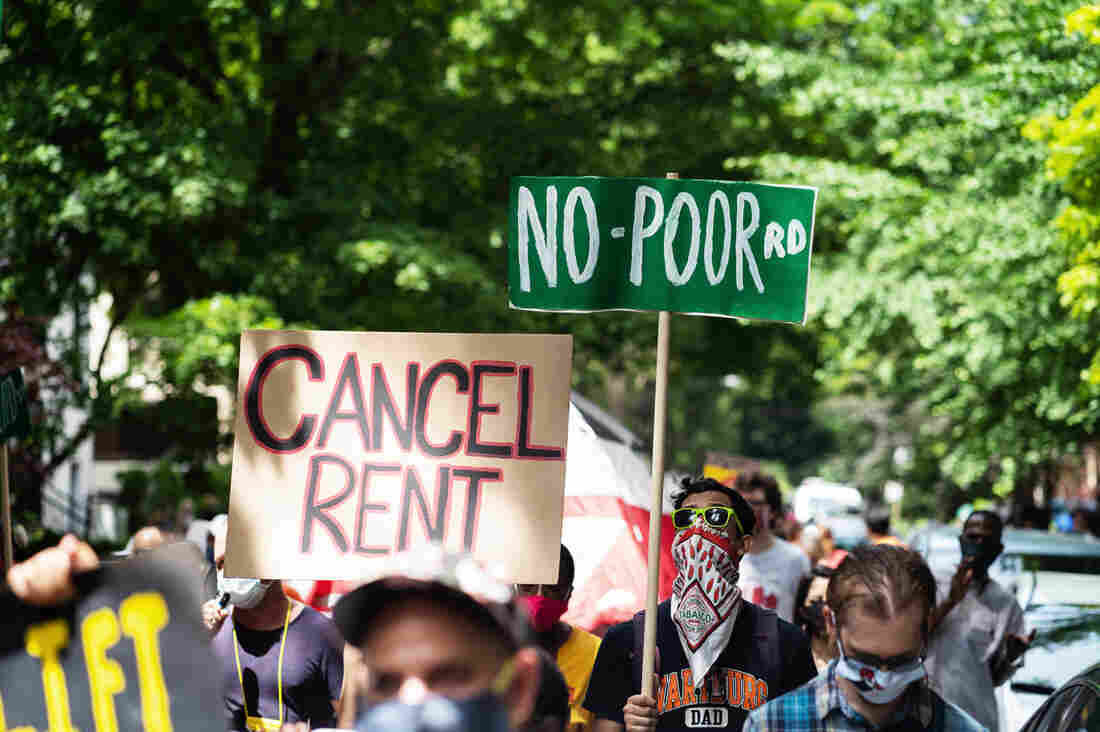 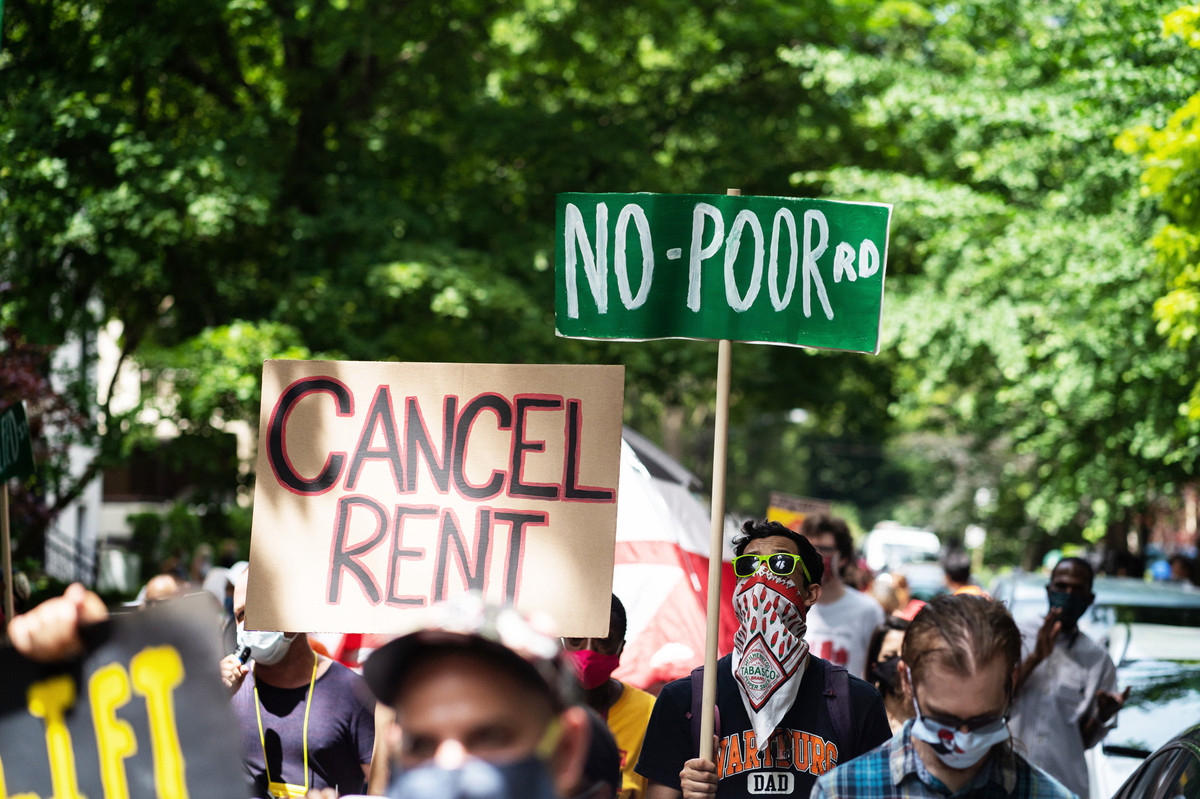 Demonstrators march in Chicago's Old Town neighborhood in June to demand a lifting of the Illinois rent control ban and a cancellation of rent and mortgage payments. The pandemic's financial pressures are causing many Americans to struggle with rent payments.

Jean lost her job as a school bus driver in Chicago during the pandemic. She was managing OK with unemployment money. But then, about two weeks ago, she got a desperate call from her adult son.

"His job had laid him off, and he wasn't able to pay rent," she says. There was an eviction moratorium in Chicago, but Jean says the landlord wanted her son out anyway.

She says the landlord got someone to threaten her son, and to shoot his dog — a German shepherd mix he'd had for years.

"He said, 'Ma, can you come over here?' " Jean says she went to his house and told her son, who has two children of his own, "OK, start packing. You got to go." They all moved in with her.

Jean only wants to use her first name for fear of retribution. She says she was afraid to report what happened to police.

Jean was one of more than 3,000 people who took part in a new poll released Wednesday from NPR, the Robert Wood Johnson Foundation and the Harvard T.H. Chan School of Public Health.

Her story is an especially stark example of how pandemic financial stress is playing out. But the poll found many people reported problems with housing, health care and unsafe workplaces, and a high percentage of Americans — 46% — said they're having "serious financial problems." Nearly one out of three respondents had used up all or most of their savings.

"Our surprise is how large the numbers are," says Robert Blendon, a Harvard University public health professor who worked on the poll. He notes that the poll was conducted during July, months after Congress approved an extra $600 a week in federal unemployment benefits that were still supposed to be flowing to people. Stimulus checks had gone out, too.

And yet so many said they're struggling. One in six households even reported missing or delaying paying major bills just so they could buy food.

Blendon says it's like the government sent 100 Federal Emergency Management Agency trucks into a disaster zone, but a lot of people never saw them or got help. "It's just like interviewing people in a hurricane area and the people are telling you there's no relief," he says, when "it should be there."

He says it could be that some people are having trouble accessing the help that's available. The government should quickly try to discover where the biggest problems are, Blendon says.

One area of serious concern is housing. Evictions have been ramping up in some parts of the country despite a federal order aimed at preventing them. And nearly 1 out of 5 poll respondents report struggling to pay rent and mortgage. The pressure is even worse for minorities.

The poll found Black and Latino households were twice as likely as white families to say they're struggling to pay or have fallen behind on rent or mortgage payments.

"It is striking, it's not surprising," says David Williams, a Harvard professor who studies race and sociology.

He says Blacks and Latinos make less money than whites, and have less savings — so they're more vulnerable. And they're less likely to have family members who can afford to loan them money for rent and other bills in an emergency.

Lynda Naranjo, who lives in Phoenix, lost her job as an accounting manager at a tow truck company after the pandemic hit. She's a single mom with four children.

Though she was getting unemployment at the time of the poll, Naranjo, who is Latina, reported she was having serious financial problems because she could see that, as soon as the extra $600 a week in federal benefits stopped coming, she was going to be in big trouble.

She knew she wasn't going to be able to support the family and pay rent with her state benefits alone, which for her are $240 a week — the maximum amount in Arizona. "No one can live off $240 a week," she says.

Lynda Naranjo of Phoenix has nearly depleted her savings and is struggling to get by on $240 in weekly unemployment. She will not be able to pay rent after next month. Lynda Naranjo hide caption

And she was right. Naranjo has now burned through almost all her savings. And she won't be able to pay rent after next month.

"It's extremely difficult to sleep at night," she says. "I wake up at 2 or 3 in the morning and my mind's just racing, just constantly racing. And then I'm having to get up in the morning and sit with my two younger children, but I'm so focused on, you know, bills and money and jobs."

Naranjo has been able to speak with the electric bill company, and she's made arrangements to pay those bills later. She says that took a little bit of stress off, but that is just a temporary solution.

"Eventually they're going to want that payment, and by then it's going to be a huge payment that is due," she says. "That's so nerve-wracking."

Naranjo says she's been looking for work with no luck. She says she has no family she can move in with or borrow money from to help pay her rent and other bills.

The extra $600 a week federal benefit expired at the end of July, and Congress has not acted to extend it or pass another relief package.

Nine out of 10 Americans think Congress should pass another pandemic assistance package to help the millions of Americans who are struggling financially, according to another poll out this week.

The House of Representatives passed a $3 trillion package favored by Democrats months ago. It includes, among other things, $100 billion for low-income rent support. But since then lawmakers in the Senate have been deadlocked, with Republicans wanting to spend less and Democrats wanting to spend more.

Effectively, Congress has done little on a large scale to send more help to struggling families. And, now that lawmakers are in the throes of a fight over a new Supreme Court justice, that could make it even harder to push through another pandemic relief bill.