Accessibility links
What To Know About Those $200 Drug Cards President Trump Promised : Shots - Health News Health policy researchers say Trump may not be able to pay for the cards, which fall short of lasting policy changes to curb high drug prices. 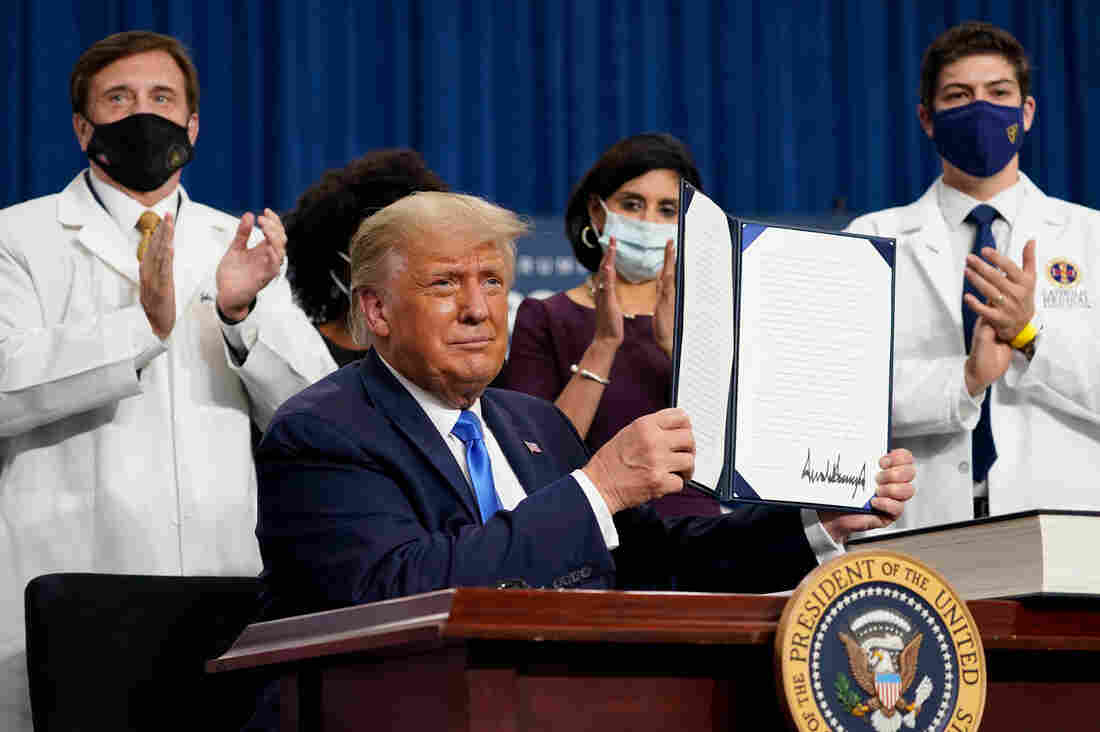 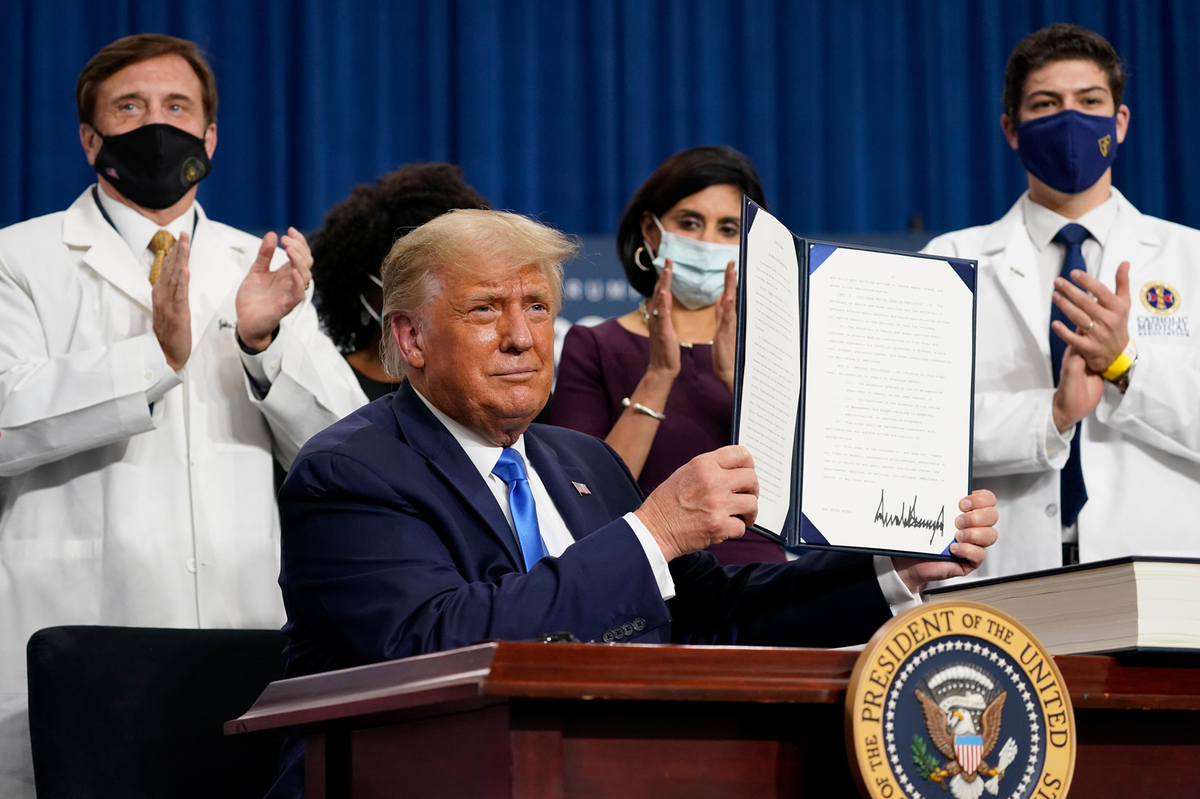 President Trump holds up an executive order after delivering remarks on health care in Charlotte, N.C., on Thursday.

President Trump promised this week to send cards worth $200 to seniors to help them pay for their prescription drugs, but it's unclear how he will be able to pull it off — or how legal it is.

If he can, that's $6.6 billion to a key voting bloc weeks before Election Day.

"Under my plan, 33 million Medicare beneficiaries will soon receive a card in the mail containing $200 that they can use to help pay for prescription drugs," Trump told a crowd in Charlotte, N.C., on Thursday. "Nobody has seen this before. These cards are incredible. The cards will be mailed out in coming weeks."

Although anything involving the Treasury usually needs congressional approval, the White House doesn't plan to go that route.

Instead, officials say the White House plans to use a section of the Social Security Act that allows Medicare to test out new programs aimed at saving money, for example, to see whether they work. Called "demonstrations," these are usually proposed by state governments, agency staff, Congress or the private sector. And the Centers for Medicare and Medicaid Services is tasked with evaluating and approving them.

But not all Medicare demonstrations are approved, says Robin Feldman, a professor at the University of California, Hastings College of the Law, who focuses on the pharmaceutical industry and drug policy.

"In my mind, the question is whether the White House could bypass the considerably extensive procedures established by the agency to evaluate proposals," she says. "That's a process that can take some time. And the White House seems to have a few weeks in mind so that it happens before the election."

Because so few details of the proposal have been released, Feldman says it's not clear how the administration plans to do this.

What's more, it's unclear what, if anything, the Trump administration is studying by sending out $200 prescription cards.

"What is really being tested here?" says Ameet Sarpatwari, assistant director of Harvard Medical School's Program on Regulation, Therapeutics and Law. "Is this a proper use of the demonstration authority?... I think the administration is pushing the envelope in terms of classifying this as a demonstration."

Under this section of the Social Security Act, demonstrations also need to be "cost neutral." White House officials say they can pay for it with savings from the president's recent "most favored nation" executive order, which would tie certain Medicare drug prices to the prices for those drugs in other countries.

But again, this detail is fuzzy because it's unclear how much money the executive order would save — if it's implemented at all. There are still more procedural steps that it, too, must go through before it can become a reality.

"We're sort of, again, putting the cart before the horse here and saying we assume that this 'most favored nation' approach will actually happen and that if it happens, what will the savings actually be?" Sarpatwari says. "So there's quite a bit of inferential leaps to say we will have money to pay for this cash giveaway."

Officials from the Department of Health and Human Services say many of the details are still being worked out, and they will send the cards out "as soon as mechanically possible," but they won't all go out before the election.

Either way, health policy researchers, advocacy groups, members of Congress and even the pharmaceutical industry say the prescription cards fall short of any lasting way to curb high drug prices.

"As with all one time gifts, once the patient pockets the money, the benefits, they still have to pay high drug prices," Feldman says. "In my view, that $6.6 billion would be better spent addressing underlying problems in the pharmaceutical industry."