Accessibility links
Parents Who've Lost Jobs Struggle To Manage Their Own Stress — And Their Kids' : Shots - Health News The pandemic economy is squeezing families with kids: 74% of those earning less than $100,000 report serious financial woes, in an NPR poll. Experts worry about lasting impacts on kids' mental health. 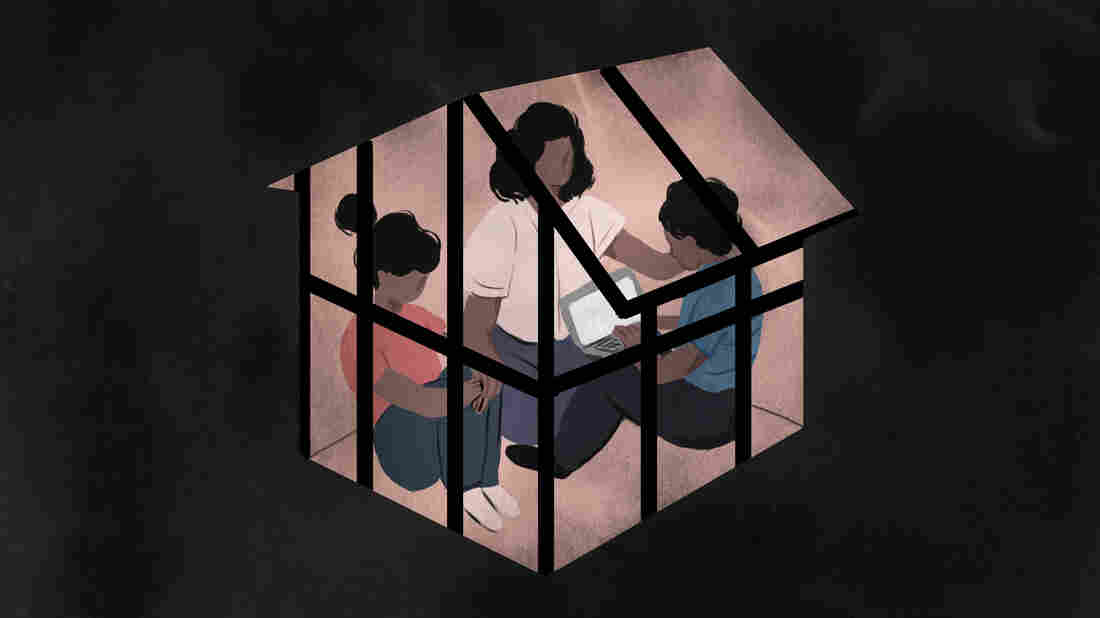 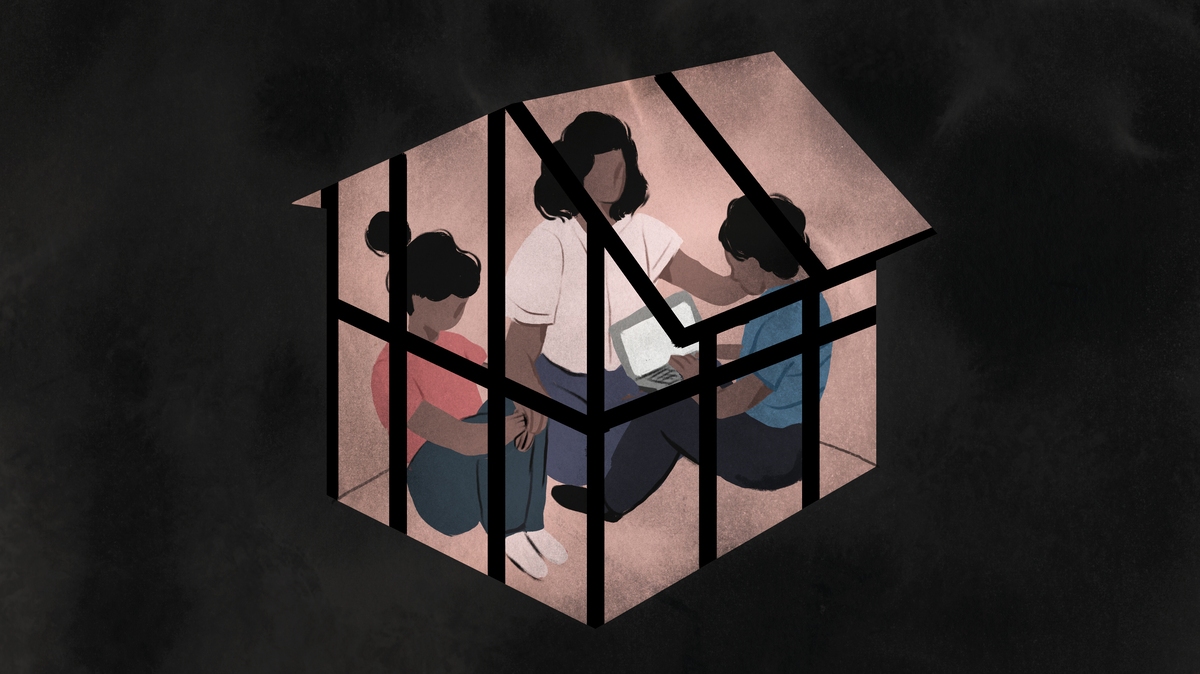 Back in early spring, Khristan Yates worked as a quality assurance analyst at a marketing company and loved her job. "I had one of the best jobs of my career," recalls Yates, 31, a resident of Chicago.

Yates, who's a mother of two children, had moved into a bigger apartment just before the pandemic hit because she wanted to give her kids more space. At the time, she felt like she was "at the top of her world."

But as the economic effects of the pandemic hit the marketing industry among others, she lost her job in May.

Yates is among the 60% of households with children across the country that have lost jobs, or businesses, or have had wages reduced during the pandemic, according to a poll released Wednesday by NPR, the Robert Wood Johnson Foundation and the Harvard T.H. Chan School of Public Health.

The poll also found 74% of households with children that made less than $100,000 report facing serious financial problems.

"We're seeing skyrocketing rates of job losses and food insecurity and stress," says Anna Johnson, a developmental psychologist at Georgetown University. "I think it will be very hard for these families who've lost income and jobs to get back to where they were. I think there will just be a lot of stress and turmoil in the household for the foreseeable future ... that takes a toll."

That toll isn't just on the parents, who're struggling to make ends meet, but also on their children, says Johnson.

With stressed-out parents at home, no school to escape to and a lack of in-person interaction with friends, children have fewer ways to cope with their circumstances, says psychologist Archana Basu of the T.H. Chan Harvard School of Public Health. Neither Basu nor Johnson were involved with the poll.

Since losing her job, Yates feels like "everything was yanked from under me."

It wasn't long after she lost her job that she realized she had hardly any money for food. "There was this moment I looked at my cabinet and said, 'Uh oh!' ... There was a couple of jars [of] peanut butter and some pasta with no sauce."

That's when she signed up for SNAP food benefits.

She now makes about $2,000 a month in unemployment, $1,300 of which goes to rent. Then there are utility bills, school supplies for her kids, Internet service to allow her children to attend school virtually and for her to keep searching for a new job.

Back when she was employed, she'd take her kids to a restaurant at least once a week, says Yates. "And we would always rent a movie, and I'd always make sure they had these awesome experiences." Now, she says, she has no money to treat her kids with anything.

"I went from having a very stable stream of income and being OK to being very not OK," she says.

Her anxiety has gone through the roof, she says. She struggles to get out of bed and there have been days when she forgot to eat.

"I would make food for my children, of course, but when it came down to like me sitting down and eating, it didn't even register," says Yates, who is Black. "So I would get up with headaches before the morning and [realize] 'oh well, you haven't eaten in two or three days. That's why your head is on fire.'"

For families of any race or ethnicity, a majority (59%) report having serious difficulties caring for their children. And 35% report they're having major troubles helping children adjust to the changes in their lives.

Yates says her 7-year-old daughter and 9-year-old son are showing signs of being stressed. Before the pandemic, "I didn't have really much of an issue with them doing chores," she says. "Now, I have to play a lot of the mad mom card, complain and really strictly enforce stuff, where usually that was not the case."

Her son and daughter bicker more with each other lately, says Yates, and take less interest in school. "As far as even getting them online to go to school, it is like pulling teeth. They don't want to do it. They're not engaged."

And, her own stress has affected her interaction with her children, she admits. "I have yelled a few times and I've had to come back and go, 'Hey, mom should not have done that. I was wrong.'"

Yates is not alone. Johnson has done her own research about the financial and emotional burden of the pandemic on families. She recently surveyed parents and teachers of 1,000 children in low income families in Tulsa, Okla., that she's been following since 2016.

Of the 600 parents who responded, she says, 60% said they've lost income due to job loss or reduced work hours and half said they were struggling to afford food. Twenty-five percent said they've been depressed since the pandemic started. And 16% reported yelling or snapping at their kids.

The parents in her study are also reporting that their "kids are acting up," notes Johnson.

"Imagine parents who are now scrambling to try to figure out how to have enough food for the household, for their kids," says Johnson. "The parents are stressed. They're short tempered, irritable, frustrated, potentially resorting to kind of harsh disciplinary strategies. They're going to be distracted and tired."

"Typically we know that children do best when they are with emotionally available, consistent and responsive caregivers, and that's what we know helps them," says Basu.

This is especially helpful during stressful situations, like this pandemic, when children are also experiencing a tremendous amount of change and transition.

"They have their own experiences in terms of changes at school, losses related to peers, after-school programs and potentially increased stress at home," says Basu. "They need adults to help them make sense of what they are already experiencing."

But if their parents are not as available emotionally, they are less able to see that their kids are struggling, too, she adds.

Symptoms of distress can manifest in many ways in children.

"For example, increased worries in kids can look like somatic symptoms. So, changes in sleep and appetite are very common in children of all ages," she says.

Then there are behavioral problems, like parents that Johnson has surveyed are reporting.

Johnson found a trend of kids not attending online school, in her survey of parents and teachers in Tulsa.

Johnson worries that these children and their families may not be able to bounce back quickly.

"Could this course correct if everything goes back to school and everything opens up again in the next eight months to 12 months?" Johnson says. "Maybe. But they're going to have to be a lot of resources targeted just to these families to help them overcome what is probably a traumatic experience for them."

Yates worries about the toll this is taking on her children. She sees that her son, who is on the autism spectrum and needed a lot of one-on-one help from his teachers, isn't getting the same support through virtual learning. And devoid of all the in-person social interactions, he is more socially withdrawn these days.

"He's the more outgoing of the two and now he's pulling back a lot," she says.

She can see her 7-year-old daughter's distress manifest in her withdrawal from school. "She won't get online and she's just like, 'I don't care,' " says Yates.

And she very much wants to help her but feels ill-equipped to do so.

"I'm her mom, and she knows like she can tell me anything, but I'm not a trained therapist," says Yates. "So, I feel like there are things I'm missing ... I know there's a hurt there, but I just don't know how to get to it. I don't know how to heal it."