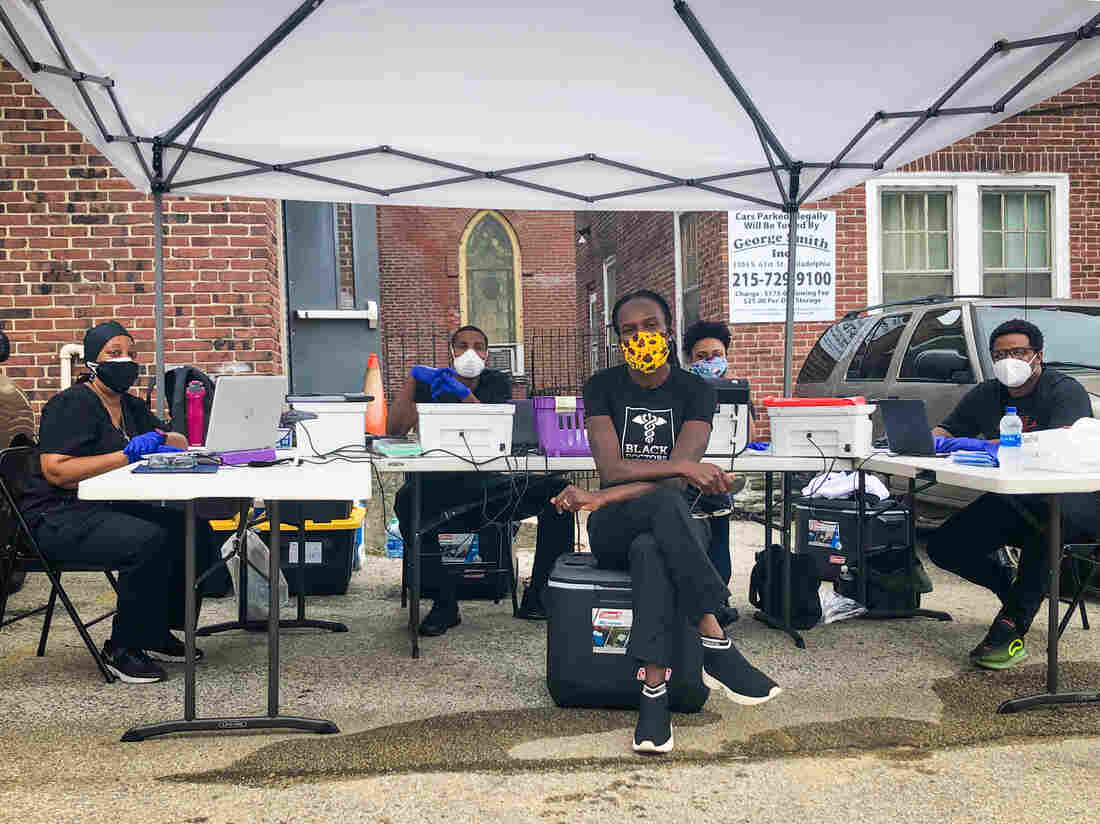 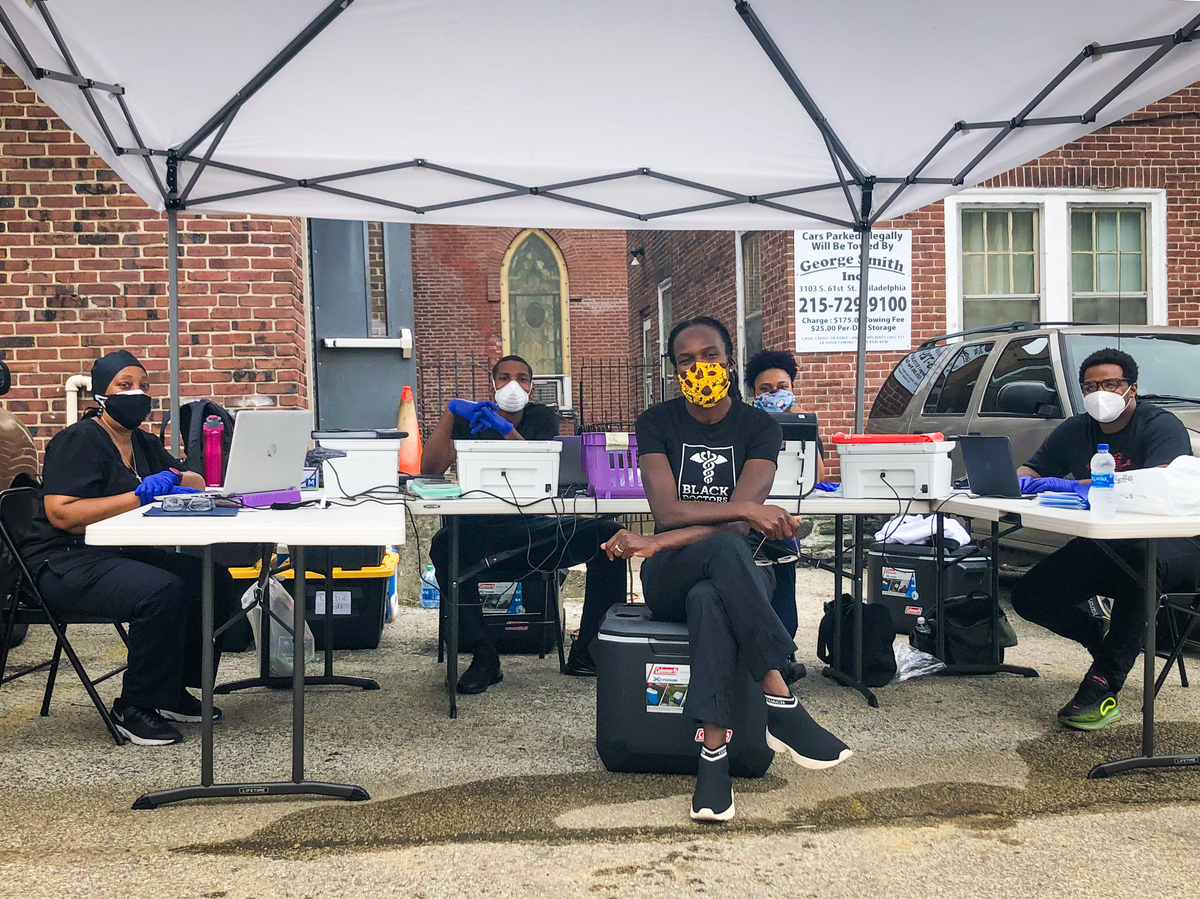 Dr. Ala Stanford and her staff at a coronavirus testing site in Pennsylvania. Stanford created the Black Doctors COVID-19 Consortium and sends mobile test units into neighborhoods.

When the coronavirus arrived in Philadelphia in March, Dr. Ala Stanford hunkered down at home with her husband and kids. She's a pediatric surgeon with a private practice, and staff privileges at a few suburban Philadelphia hospitals. For weeks, most of her usual procedures and patient visits were canceled. So she found herself, like a lot of people, spending the days in her pajamas, glued to the TV.

And then, at the beginning of April, she started seeing media reports indicating that Black people were contracting the coronavirus and dying from COVID-19 at greater rates than everyone else.

"It just hit me like, what is going on?" says Stanford.

At the same time, she started hearing from Black friends who couldn't get tested because they didn't have a doctors' referral, or didn't meet the testing criteria. In April, there were shortages of coronavirus tests in numerous locations across the country, but Stanford decided to call around to the hospitals where she works to learn more about why people were being turned away.

One explanation she heard was that a doctor had to sign on to be the "physician of record" for anyone seeking a test. In a siloed health system, it could be complicated to sort out the logistics of who would communicate test results back to patients. And, in an effort to protect health care workers from being exposed to the virus, some test sites wouldn't let people without cars simply walk up to the test site. 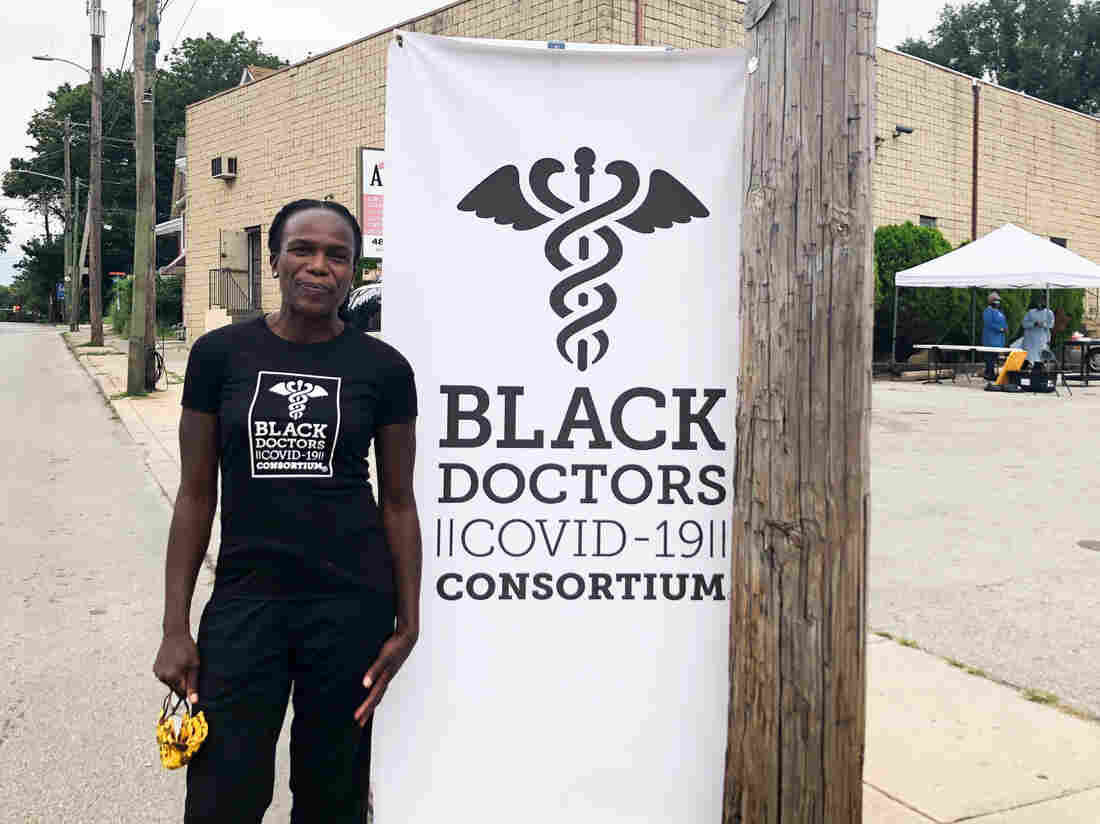 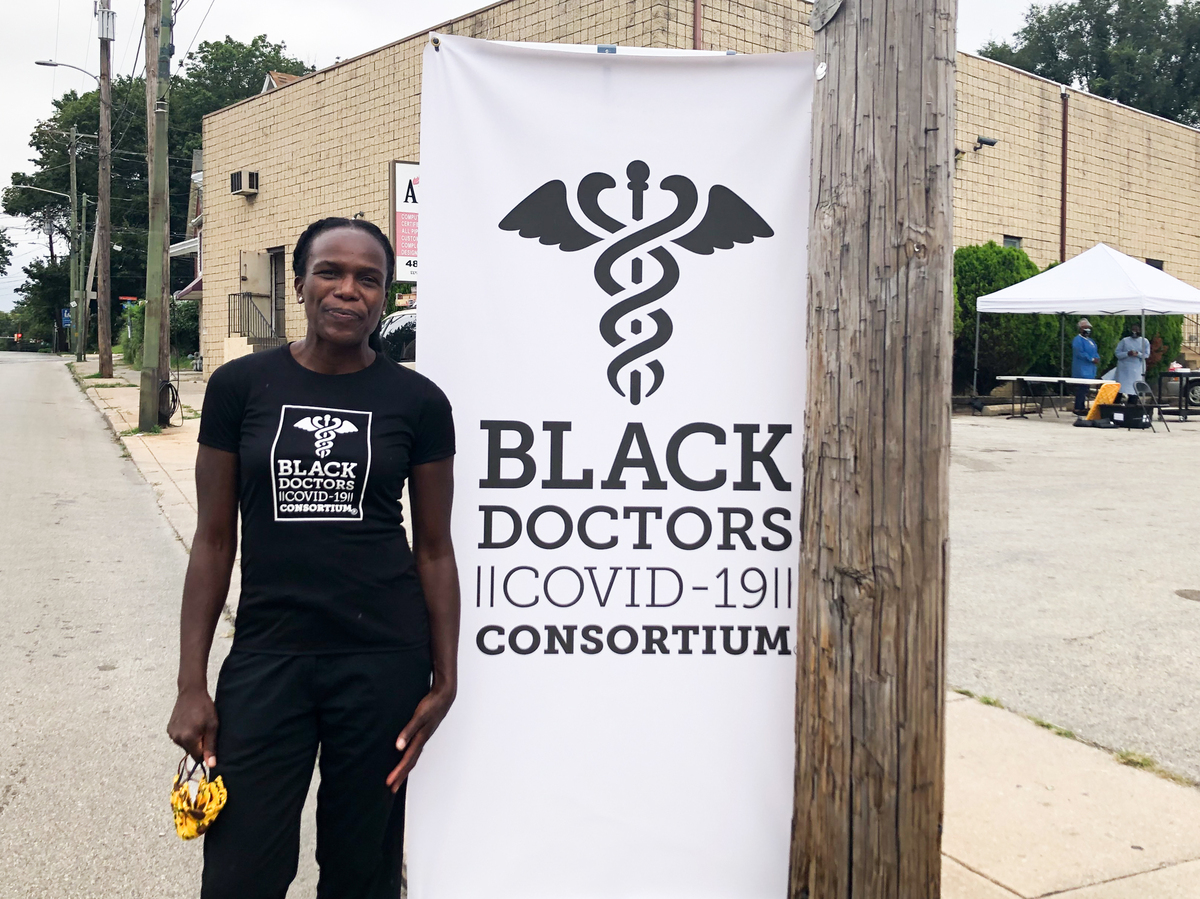 Stanford at a Black Doctors Consortium testing site in Darby, Pa., on Sept. 9. Stanford has largely self-funded the testing initiative.

Stanford knew African Americans were less likely to have primary care physicians than white Americans, and more likely to rely on public transportation. She just couldn't square all of that with the disproportionate infection rates for Black people she was seeing on the news.

"All these reasons in my mind were barriers and excuses," she says. "And in essence I decided in that moment we were going to test the city of Philadelphia."

Black Philadelphians contract the coronavirus at a rate nearly twice that of their white counterparts. They also are more likely to have severe cases of the virus: African Americans make up 44% of Philadelphians, but 55% of those hospitalized for COVID-19.

Black Philadelphians are more likely to work jobs that can't be performed at home, putting them at a greater risk of exposure. In the city's jails, sanitation and transportation departments, the workers are predominantly Black, and as the pandemic progressed they contracted COVID-19 at high rates.

The increased severity of illness among African Americans may also be due in part to underlying health conditions more prevalent among Black people, but Stanford maintains that unequal access to healthcare is the greatest driver of the disparity.

"When an elderly funeral home director in West Philly tries to get tested and you turn him away because he doesn't have a prescription, that has nothing to do with his hypertension, that has everything to do with your implicit bias," she says, referring to an actual incident she encountered. 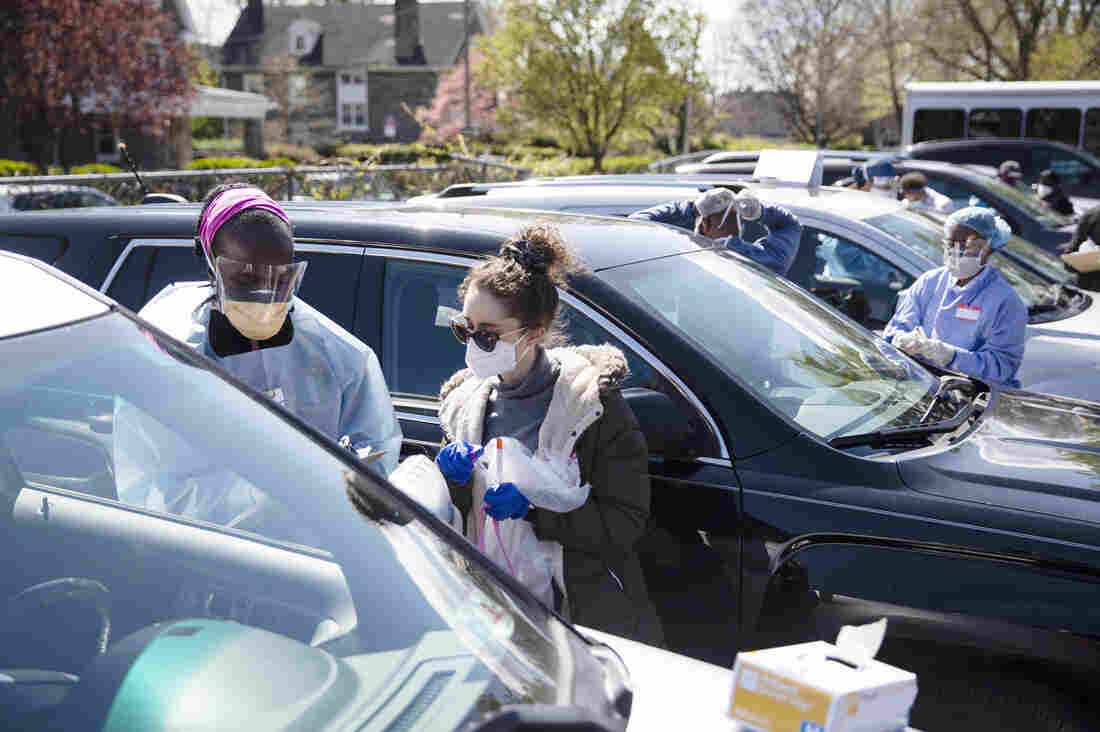 Before April was over, Stanford sprang into action. Her mom rented a minivan, while Stanford started recruiting volunteers among the doctors, nurses and medical students in her network. She got testing kits from LabCorp, where she had an account through her private practice. Fueled by Stanford's personal savings and donations collected through a GoFundMe campaign, the minivan posted up in church parking lots and popped open tents on busy street corners in Philadelphia.

It wasn't long before she was facing her own logistical barriers. LabCorp asked her how she wanted to handle uninsured patients whose tests it processed.

"I said, for every person that does not have insurance, you're gonna bill me, and I'm gonna figure out how to pay for it later," says Stanford. "But I can't have someone die for a test that costs $200."

Philadelphians live-streamed themselves on social media while they got tested, and word spread. By May, it wasn't unusual for the Black Doctors COVID-19 Consortium to test more than 350 people a day. Stanford brought the group under the umbrella of a nonprofit she already operated that offers tutoring and mentorship to youth in under-resourced schools. 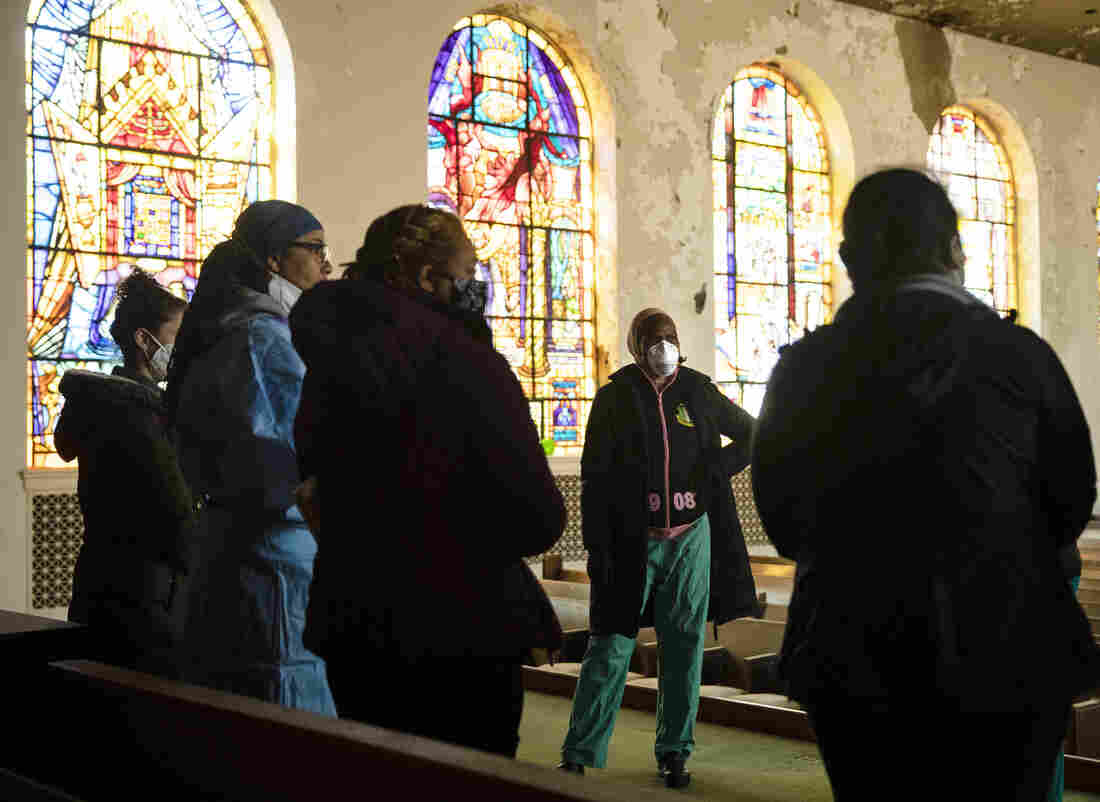 Stanford speaks with volunteers ahead of the opening of a "barrier free" COVID-19 test location outside Pinn Memorial Baptist Church in Philadelphia in April. Matt Rourke/AP hide caption

Tavier Thomas found out about the group on Facebook back in April. He works at a T-Mobile store, and his co-worker had tested positive. Not long after, he started feeling a bit short of breath.

"I probably touch 100 phones a day," says Thomas, 23. "So I wanted to get tested, and I wanted to make sure the people testing me were Black."

Many Black Americans seek out Black providers because they've experienced cultural indifference or mistreatment in the health system. Thomas says his preference is also rooted in history, pointing to times when white doctors and medical researchers exploiting Black patients. In the 19th century American South, for example, white surgeon J. Marion Sims performed experimental gynecological treatments without anesthesia on enslaved Black women. Perhaps the most notorious example began in the 1930s, when the United States government enrolled Black men with syphilis in a study at the Tuskegee Institute, to see what would happen when the disease went untreated for years. The patients did not consent to the terms of the study and were not offered treatment, even when an effective one became widely available.

"They just watched them die of the disease," says Thomas, of the Tuskegee experiments.

"So to be truthful, when, like, new diseases drop? I'm a little weird about the mainstream testing me, or sticking anything in me."

Back in April, Thomas tested positive for the coronavirus but recovered quickly. He returned recently to be tested again by Stanford's group, even though the testing site that day was in a church parking lot in Darby, Pa., a solid 30-minute drive from where he lives.

Thomas says the second test was just for safety, because he lives with his elderly grandfather and doesn't want to risk infecting him. He also brought along his brother, McKenzie Johnson. Johnson lives in neighboring Delaware but says it was hard to get tested there without an appointment, and without health insurance. It was his first time being swabbed. 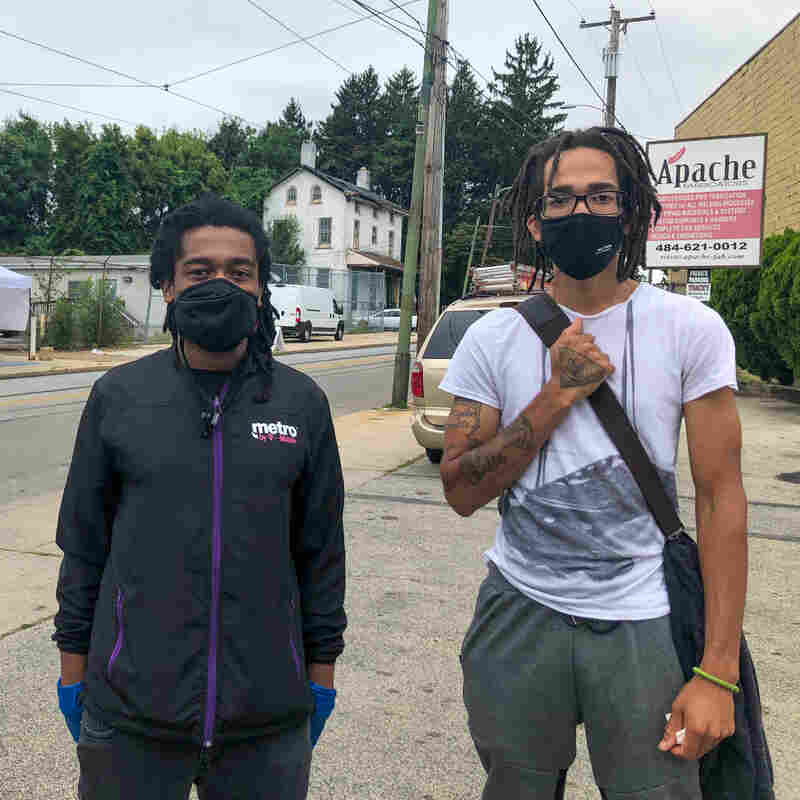 Brothers Tavier Thomas (left) and McKenzie Johnson on the day they were tested for the coronavirus at a Black Doctors COVID-19 Consortium testing site. Tavier, who studies history, explained that he feels more comfortable getting treatment from Black medical providers because of past abuses of Black people by white doctors and medical researchers in the U.S. Nina Feldman/WHYY hide caption

"It's not as bad as I thought it was gonna be," he joked afterward. "You cry a little bit — they search in your soul a little bit — but naw, it's fine."

Each time it offers tests, the consortium sets up what amounts to a mini outdoor hospital, complete with office supplies, printers and shredders. When they do antibody tests, they need to power their centrifuges. Those costs, plus the lab processing fee of $225 per test and compensation for 15-30 staff members, amounts to roughly $25,000 per day, by Stanford's estimate.

"Sometimes you get reimbursed and sometimes you don't," she says. "It's not an inexpensive operation at all."

After its first few months, the consortium came to the attention of Philadelphia city leaders, who gave the group about $1 million in funding. The group also attracted funding from foundations and individuals. The regional transportation authority hired the group to test its frontline transit workers on a weekly basis.

To date, the Black Doctors COVID-19 Consortium has tested more than 10,000 people — and Stanford is the "doctor on record" for each of them.

She appreciates the financial support from the local government agencies but still worries that the city, and Philadelphia's well-resourced hospital systems, aren't being proactive enough on their own. In July, wait times for results from national commercial labs like LabCorp could sometimes stretch past two weeks. The delays rendered the work of the consortium's testing sites essentially worthless, unless a person agreed to isolate completely while awaiting the results.

Meanwhile, at the major Philadelphia-area hospitals, doctors could get results within hours, using their in-house processing labs. Stanford called upon the health systems to share their testing technology with the surrounding community, but she says she was told it was logistically impossible.

"Unfortunately, the value put on some of our poorest areas is not demonstrated," Stanford says. "It's not shown that those folks matter enough. That's my opinion. They matter to me. That's what keeps me going."

Now, Stanford is working with Philadelphia's health commissioner, trying to create a rotating schedule wherein each of the city's health systems would offer free testing one day per week, from 9 a.m. to 9 p.m.

The medical infrastructure she has set up, Stanford says, and its popularity in the Black community, makes her group a likely candidate to help distribute a coronavirus vaccine when one becomes available. Representatives from the U.S. Department of Health and Human Services visited one of her consortium's testing sites, to evaluate the potential for the group to pivot to vaccinations.

Overall, Stanford says she is happy to help out during the planning phases to make sure the most vulnerable Philadelphians can access the vaccine. However, she is distrustful of the federal oversight involved in vetting an eventual coronavirus vaccine. She says there are still too many unanswered questions about the process, and too many other instances of the Trump administration putting political pressure on the CDC and the FDA, for her to commit now to doing actual vaccinations in Philadelphia's neighborhoods.

This story comes from NPR's partnership with WHYY and Kaiser Health News.