Accessibility links
Scientists Study The Long Term Health Effects Of Wildfire Smoke : Shots - Health News Scientists know that tiny particles from smoke can be inhaled deep into a person's lungs and even enter the bloodstream. But the long-term health effects of this are not fully understood. 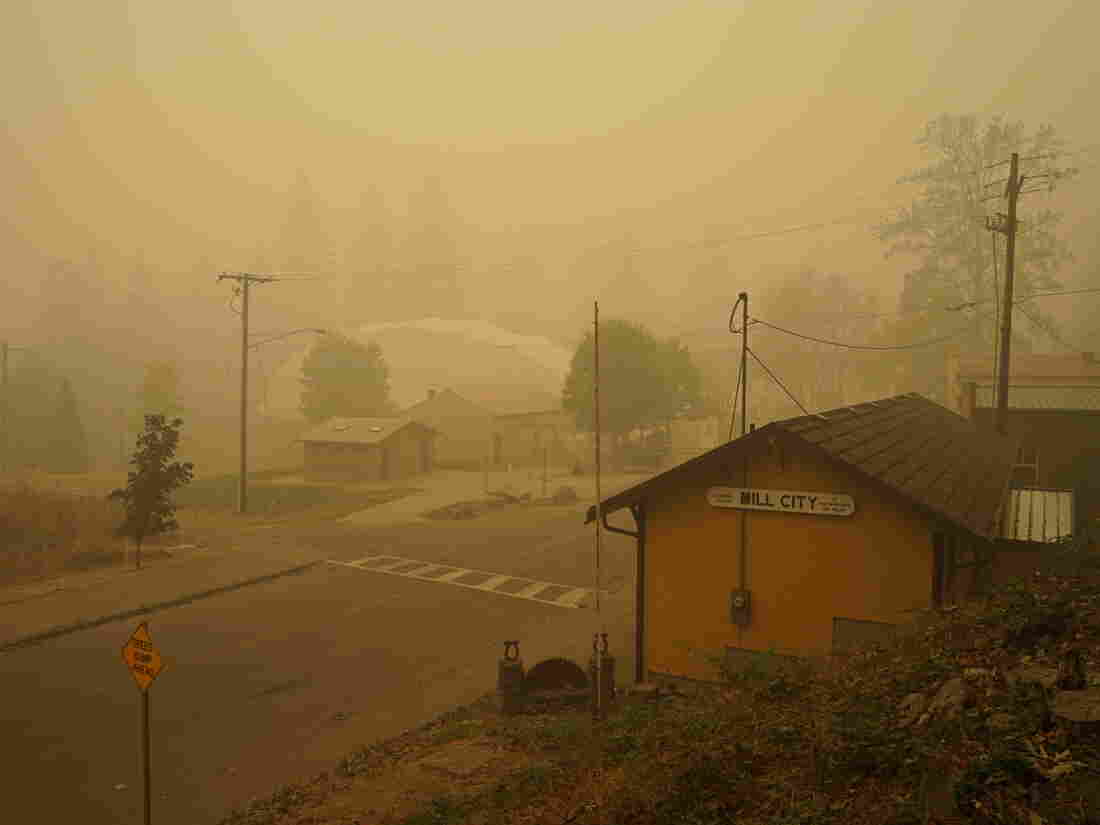 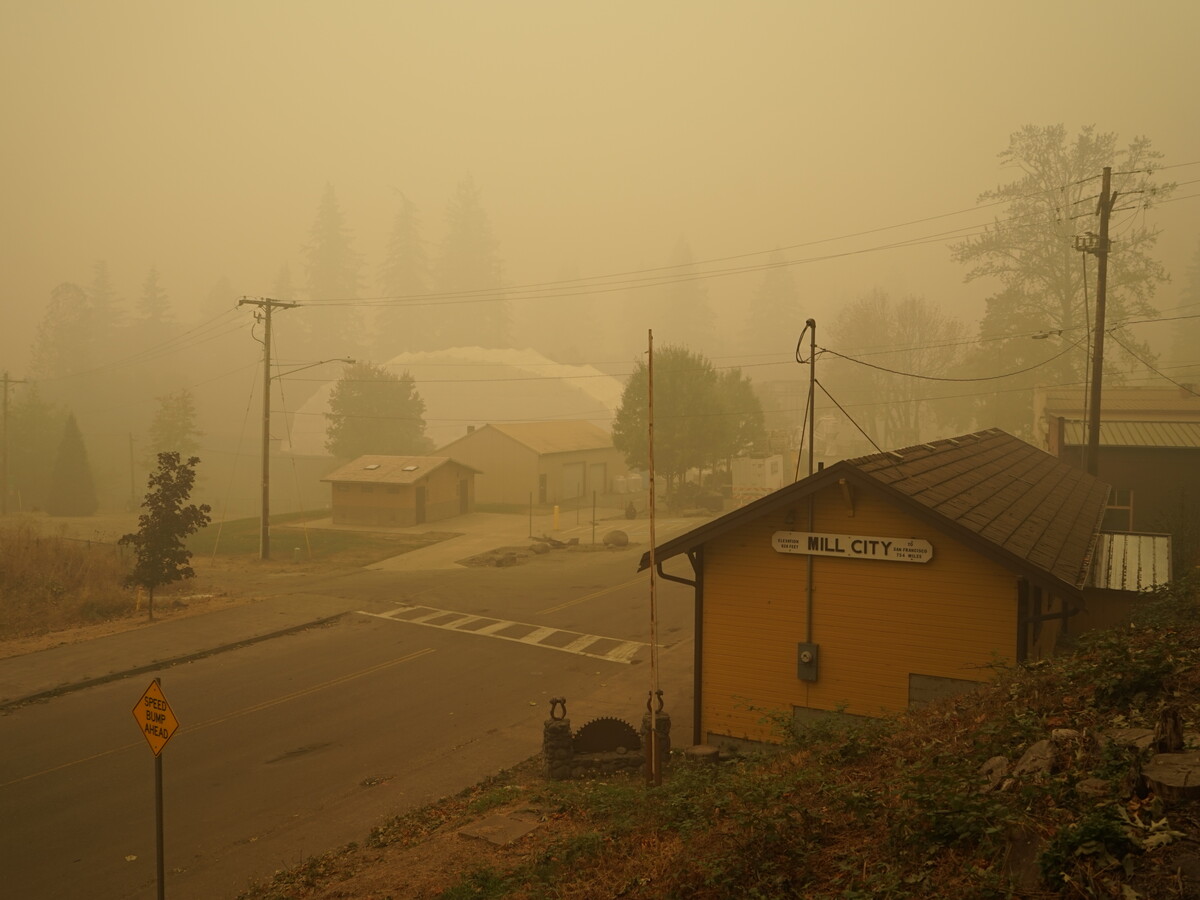 Smoke blankets Mill City, Oregon, which was evacuated for days following the nearby Beachie Creek Fire.

Ariel Kinzinger had a headache. Clark Brinkman coughed and wheezed. LaNesha Collins, feeling physically fine, was frustrated by another day mostly trapped inside looking out at a sepia sun, in Portland, Ore.

"I've never been in the thick of smoke like this," said Collins, an Oregonian like the others. "It's insane."

In recent weeks, tens of millions of Americans have lived and breathed through a thick haze of wildfire smoke. In places, it lasted for weeks. The immediate health effects of that are well known to the medical community and anyone who's been exposed: Eyes sting, throats tighten, snot can turn black.

Respiratory problems like asthma and chronic obstructive pulmonary disease (COPD) can be exacerbated, causing spikes in hospital visits. And recent research on the link between wildfire smoke and the flu, even suggests it could increase a person's risk of contracting COVID-19.

Much less is known though about what happens after the smoke clears.

"Every person who asks me is like, 'What does this mean for my health a long time from now?,'" says Colleen Reid, a geographer at the University of Colorado Boulder who studies the health impacts of wildfire smoke. "And unfortunately we don't really know."

The lack of data and information on the long-term health impacts of wildfire smoke is a hole scientists and epidemiologists are quickly trying to fill. Research teams are looking at long-term lung function after smoke exposure, and potential impacts on pregnant women and infants. These efforts have been slowed by the pandemic, but have taken on new urgency with recent events.

Record-breaking wildfires, like those the West Coast has experienced this year, have become a near-annual occurrence. Human-caused climate change is increasing the length and intensity of fire season globally. More people are moving to fire-prone areas. And there's a growing understanding among land managers and the public that more "good fire" is going to be needed across broad swaths of the U.S. to chip away at a century's worth of accumulated vegetation in some Western forests. All of this means more people are going to be exposed to smoke more frequently in the future.

"The paradigm's changing where a [smoke event] is not just this one-time disaster for many communities in the West," says Sheryl Magzamen, an assistant professor of epidemiology at Colorado State University. "They're actually chronic disasters that occur every two to three years."

Days of thick smoke are not a new occurrence in many Western communities. But the breadth and duration of the smoke generated by this year's fires is without modern precedent.

An NPR analysis of air quality data on the West Coast found that 1 in 7 Americans have experienced at least a day of unhealthy air conditions during this fire season. That doesn't include people in less-populated states like Idaho, Montana and Colorado, where smoke was so thick in places that school classes, moved outdoors because of the pandemic, had to reverse course and head inside. 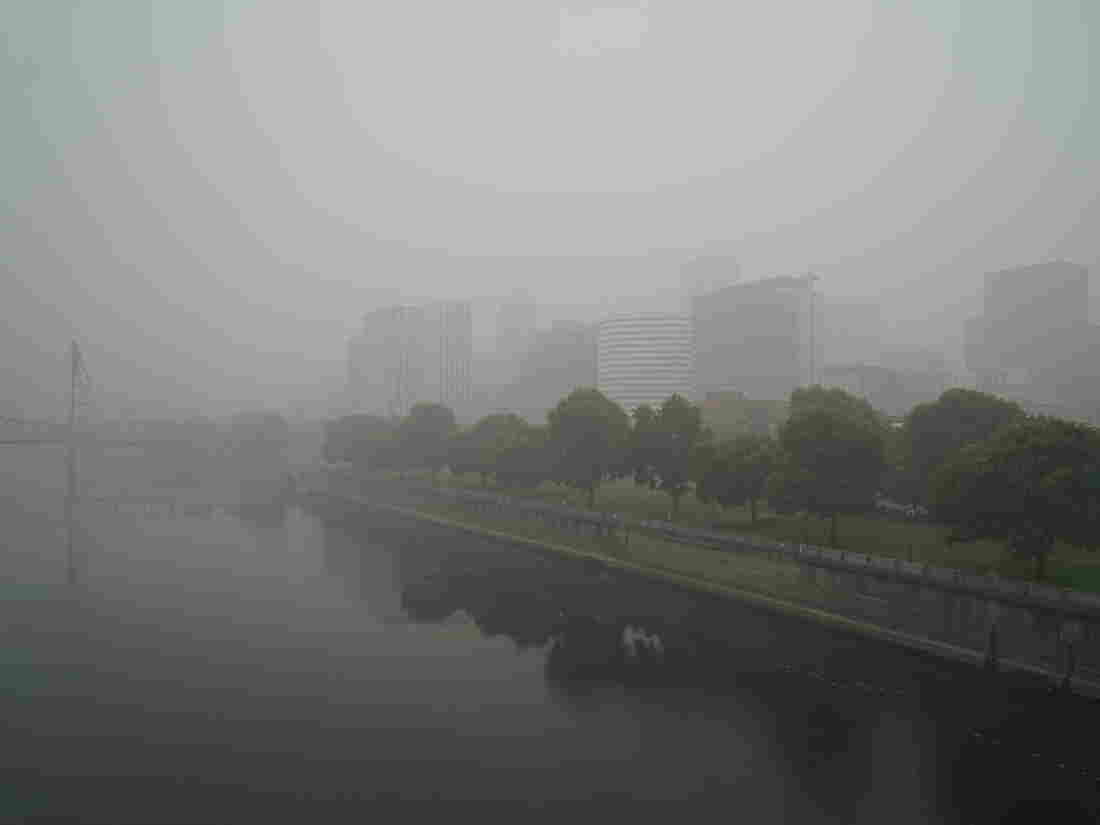 Millions of people in cities small and large, like Portland, Ore., were exposed to hazardous levels of smoke for multiple days this summer. Nathan Rott/NPR hide caption 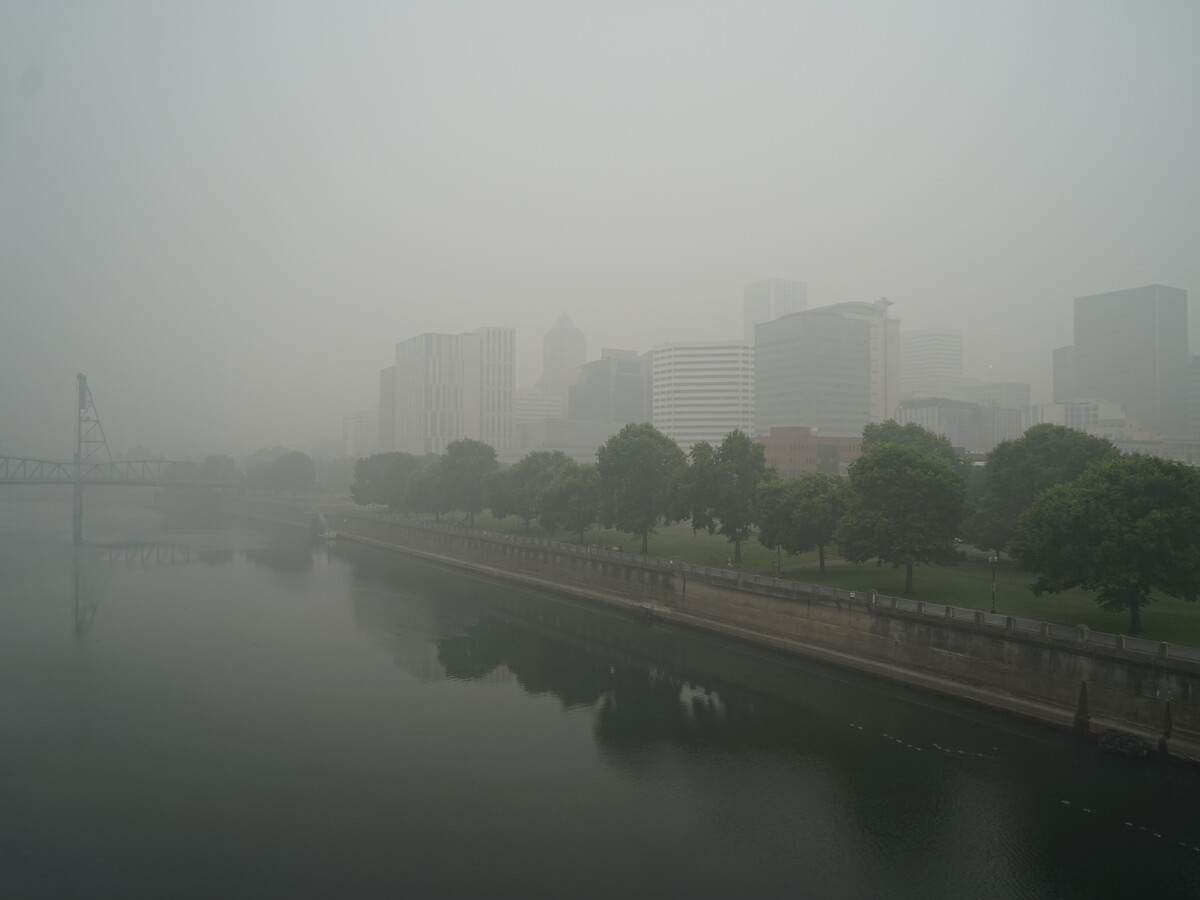 Millions of people in cities small and large, like Portland, Ore., were exposed to hazardous levels of smoke for multiple days this summer.

Smoke that's traveled a far distance is different from smoke that's being generated nearby, says Tony Ward, a professor of community and health sciences at the University of Montana. "But there's really no safe level of being exposed to particulate matter, which is one of the main things that are in forest fire smoke."

Particulate matter is a term for solid or liquid particles that are suspended or floating in the air. Fires generate a lot of it. As trees, shrubs and houses burn, they release soot, ash and other particles. The smallest of those, 2.5 micrometers in diameter and smaller, can stay airborne for long periods of time and travel hundreds of miles.

But it's how far they can travel into the human body that is most worrisome to health experts.

Because of their size, those tiny particles — generally referred to as PM2.5 — can be inhaled deep into a person's lungs and even enter the bloodstream. There, the particles can harm a person's respiratory and cardiovascular systems, increasing the risk of heart attack, stroke and infection.

Scientists have even found that elevated levels of ambient PM2.5 can contribute to diabetes and negative birth outcomes for pregnant women.

Most of what we know about PM2.5 though, experts say, comes from research into particles that are released from human sources like cars, power plants or homes. Not wildfires.

"I don't think right now we have great answers on whether anthropogenic PM2.5 is different in terms of health effects than when you get PM2.5 from biomass burning, especially over the long-term," Magzamen says. 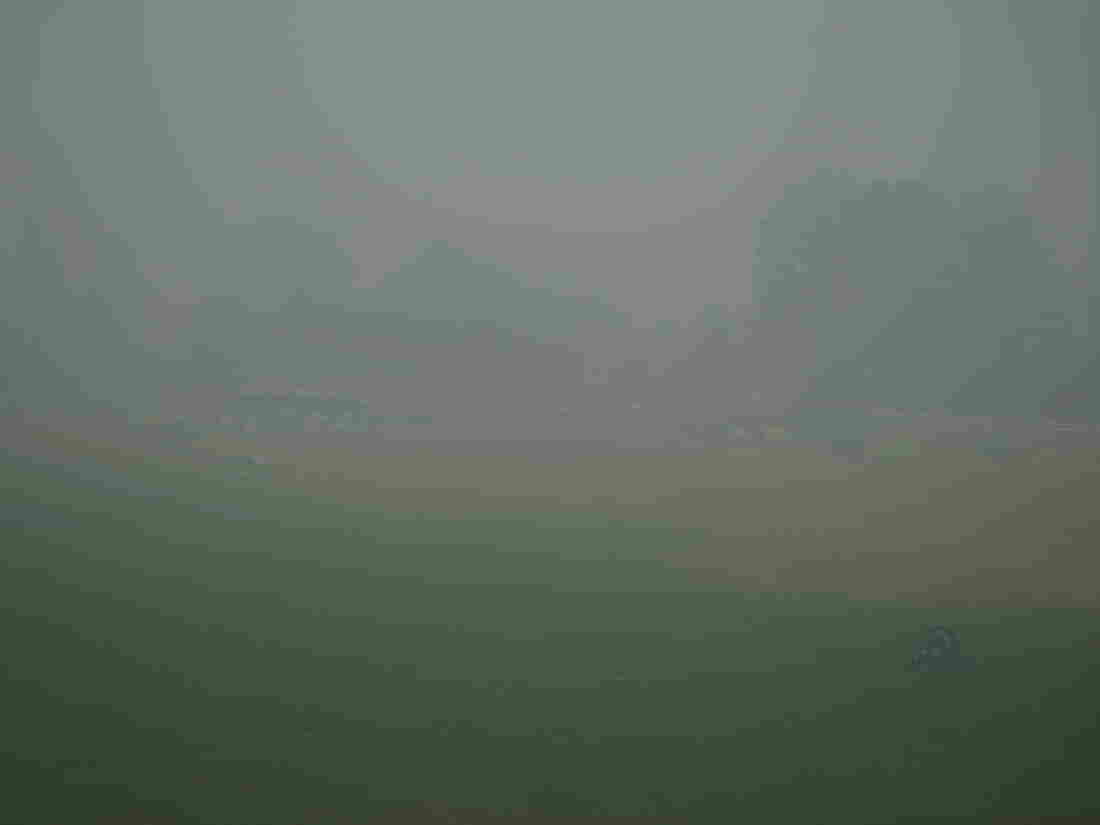 Tents of a fire camp, where firefighters sleep between shifts, is shrouded in thick smoke. On large incidents with remote field camps, many wildland firefighters get no break from smoke. Nathan Rott/NPR hide caption 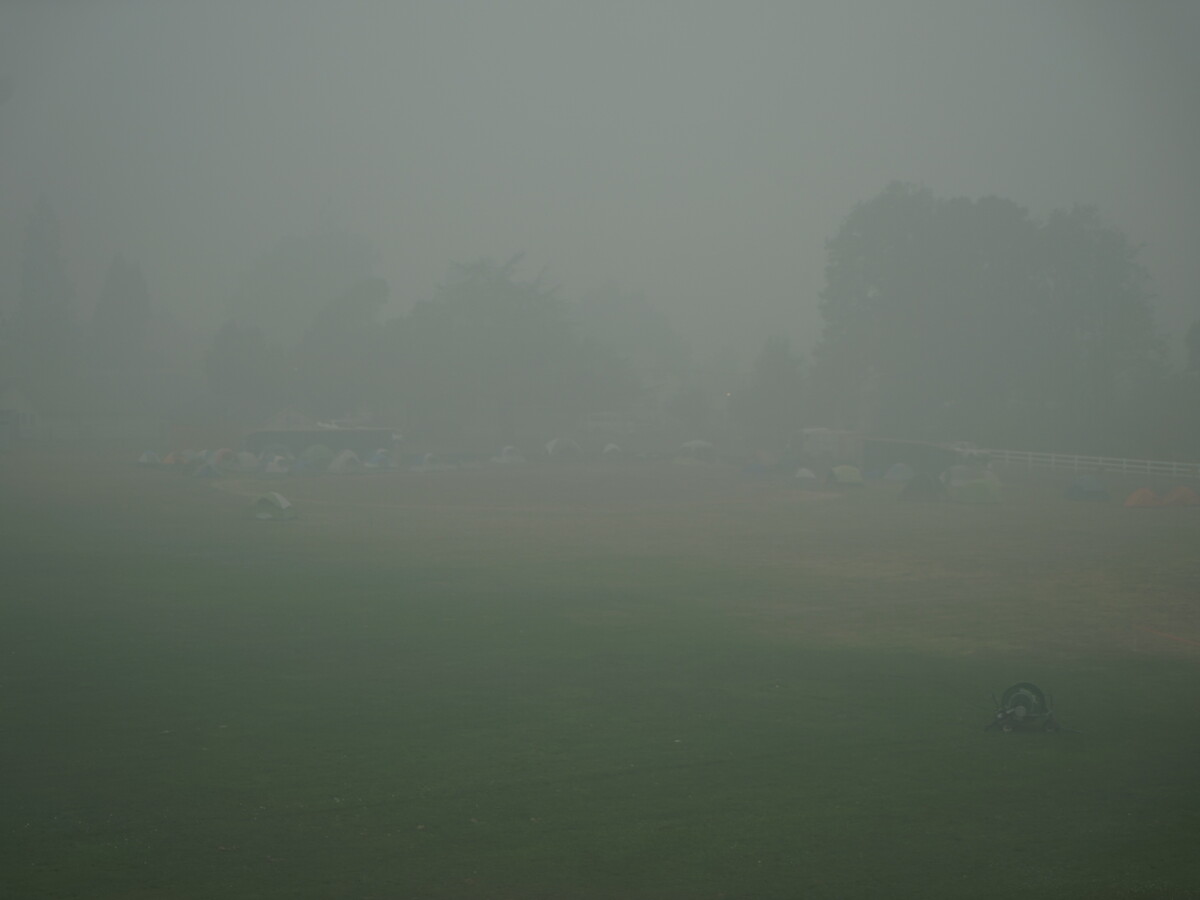 Tents of a fire camp, where firefighters sleep between shifts, is shrouded in thick smoke. On large incidents with remote field camps, many wildland firefighters get no break from smoke.

Too soon to know

Following the deadly North Bay fires in 2017, researchers at the University of California Davis started a long-term study looking specifically at how fires and their smoke impact expectant mothers and their infants.

They were recruiting women for other studies when the fires occurred, says Rebecca Schmidt, a professor at UC Davis who is leading the research. "They started asking us, 'What is this wildfire doing to my pregnancy? My baby?' We did a literature search and [found] there really isn't a lot of data out there."

The data that did exist was based on traffic-related air pollution. It looked at how pollution from cars impacted childrens' respiratory health and neural development. "But these wildfire exposures are pretty different because they're over the course of weeks instead of all year round," Schmidt says.

Further complicating the question, Schmidt says, is that wildfire does more than just release smoke. It creates stress and anxiety. People may have to flee their home. All of that can affect a person's health.

Regardless, Schmidt says nearly all of the babies in their early studies have been born looking healthy. "I think it's good for [moms] to realize that, because we mothers worry enough about everything as it is," she says.

If funding allows, Schmidt says, they're hoping to follow some of those babies as they develop, looking for more subtle or significant down-the-road effects. Right now, it's too soon to definitively say. 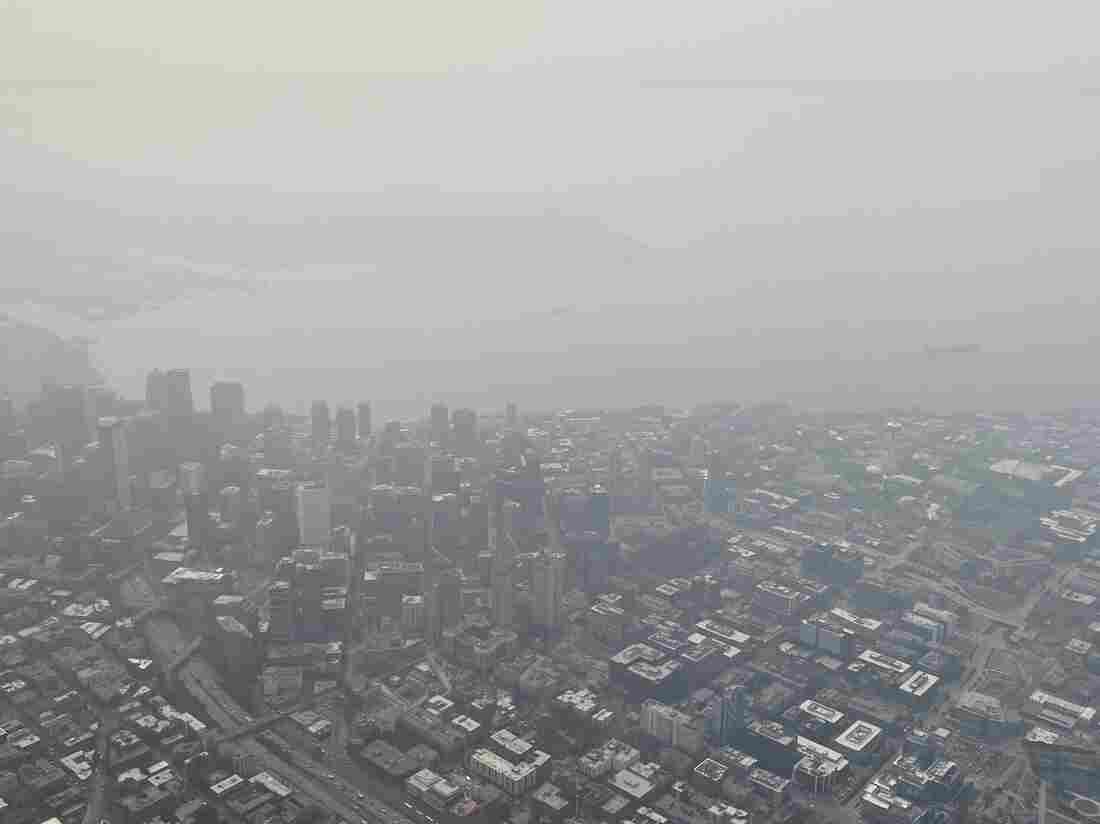 In early September, Seattle, Wash., had some of the worst air quality in the world because of wildfire smoke. The city is among the first to create smoke shelters for the most vulnerable. Nathan Rott/NPR hide caption 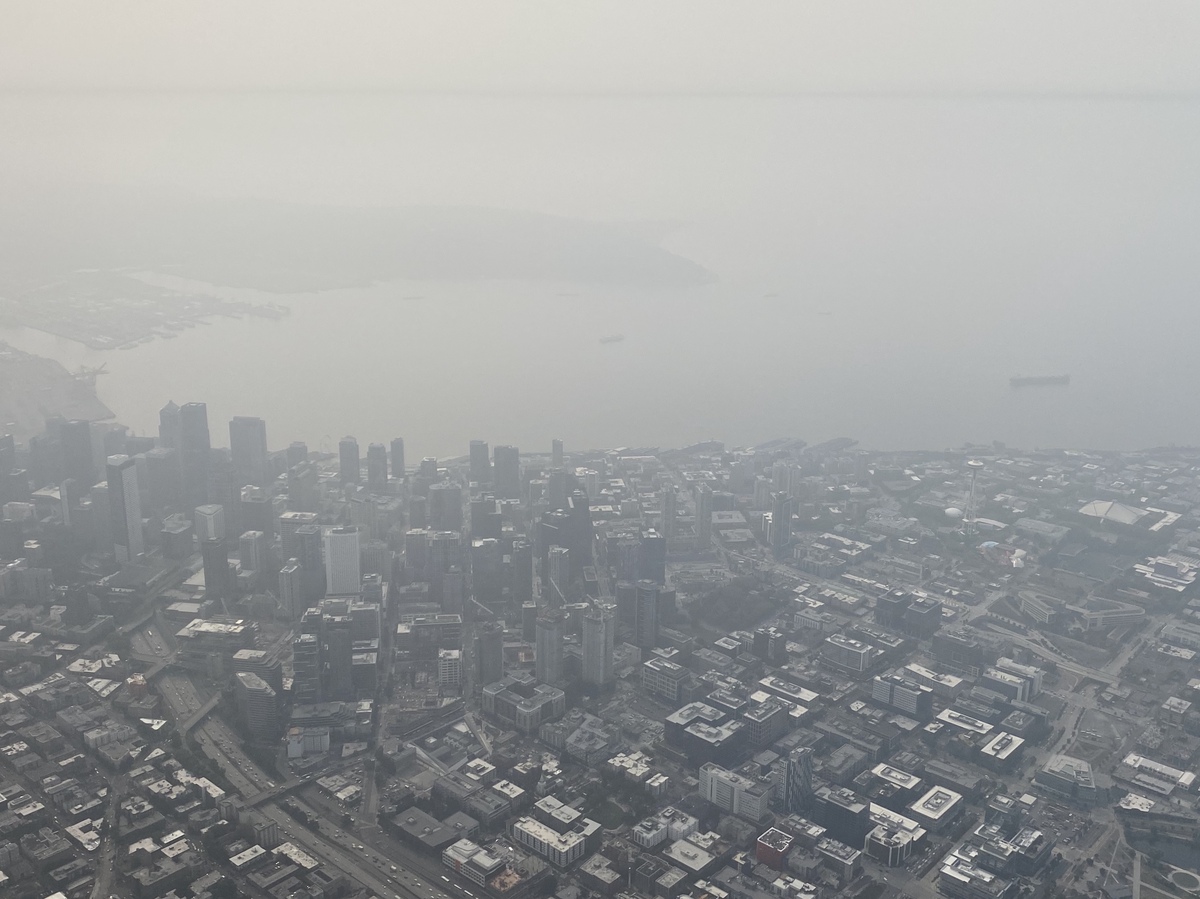 In early September, Seattle, Wash., had some of the worst air quality in the world because of wildfire smoke. The city is among the first to create smoke shelters for the most vulnerable.

A similar long-term study is underway in Montana, where researchers are following a group of adults from a small town that was smothered by smoke for weeks during the 2017 fire season.

Early results have been troubling. Of the 95 people that were initially surveyed following the weeks-long smoke exposure, roughly one-third came back a year later to see if their lungs had recovered. They had not. In fact, for most of them lung function had declined even further. Researchers are hoping to do more surveys, but have been slowed by the COVID-19 pandemic.

Despite all that is not known about the long-term health effects of wildfire smoke, researchers say one thing is clear: Smoke events are not going away. Nor should they. Wildfire is a natural and necessary process in much of the West.

"We need to have the research into ways to try and decrease the health harms associated with smoke, while still allowing for fire to exist," says Reid, the researcher from the University of Colorado. "It's needed as part of the landscape that we live in."

By better understanding who smoke most affects and how, she says, communities can take steps to protect the most vulnerable going forward. 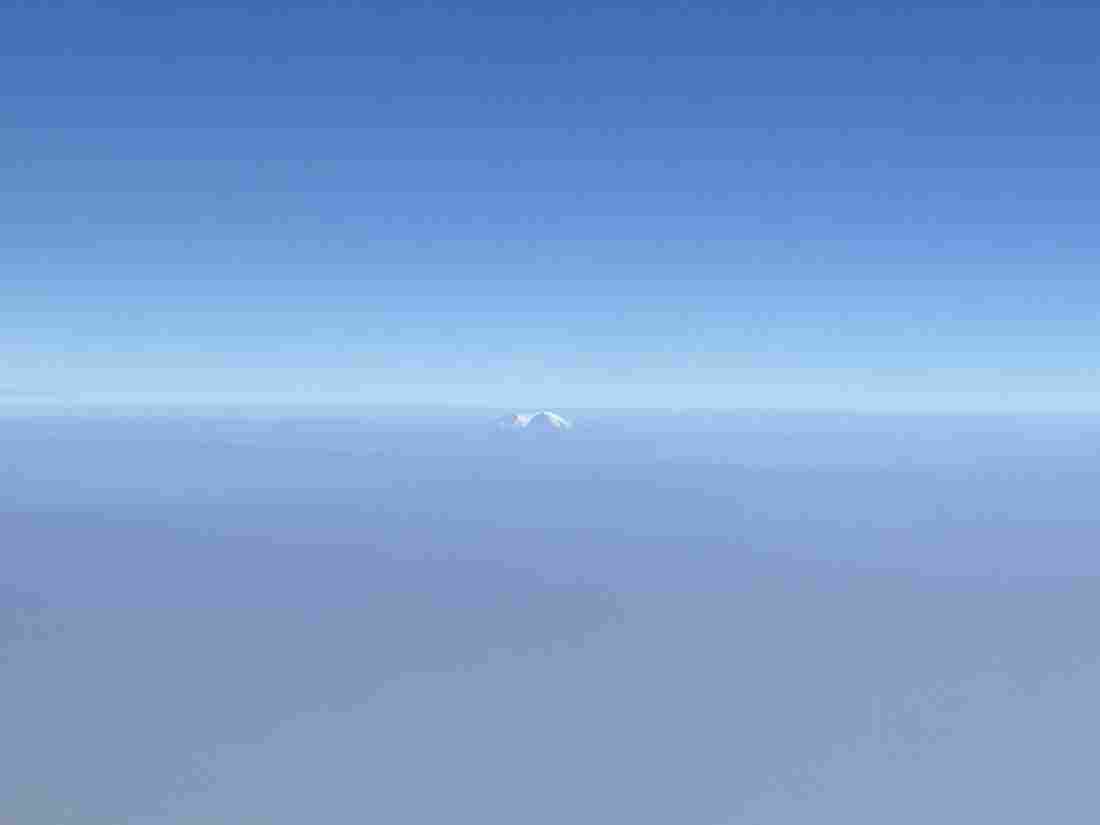 A mountain peak pokes out from a thick blanket of smoke covering much of the West Coast. Nathan Rott/NPR hide caption 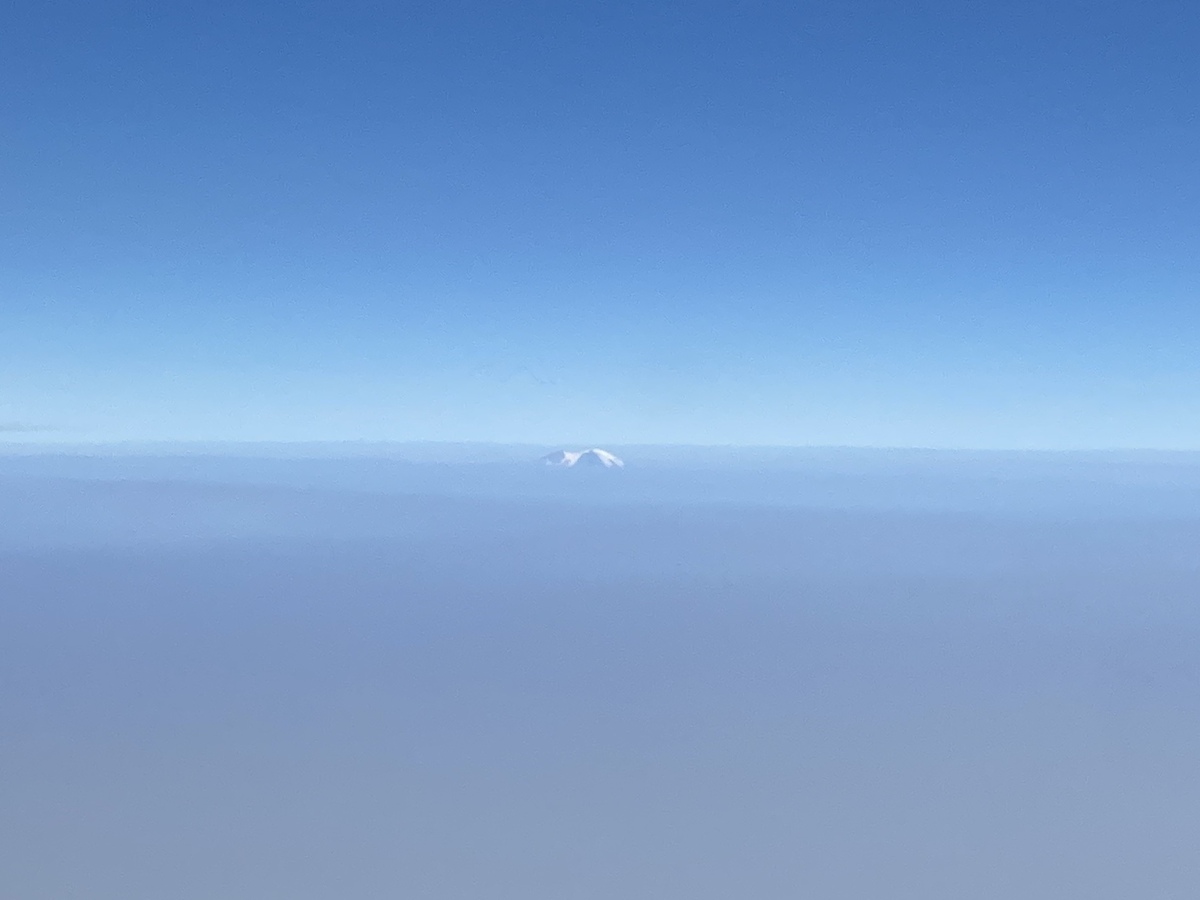 A mountain peak pokes out from a thick blanket of smoke covering much of the West Coast.