Accessibility links
COVID-19 Vaccine Distribution Will Be Challenging. States Rush To Plan Ahead : Shots - Health News A vaccine will only work if a lot of people can get immunized. State health officials are working furiously to design outreach and distribution plans, with little clarity from the federal government. 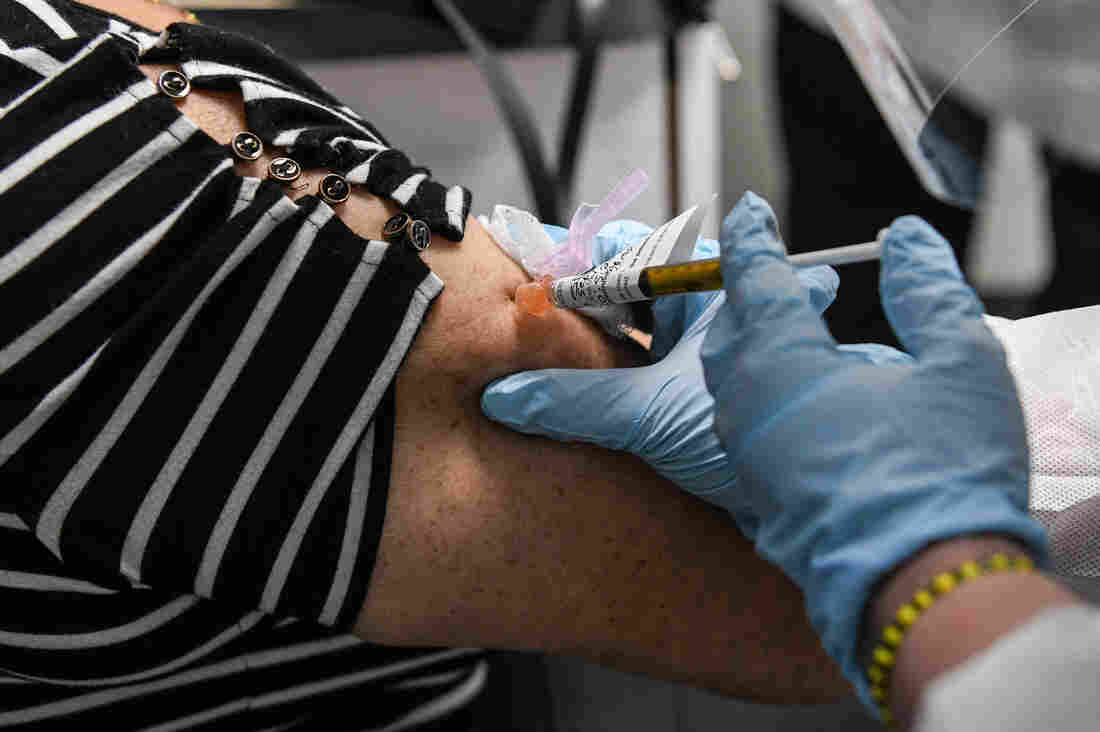 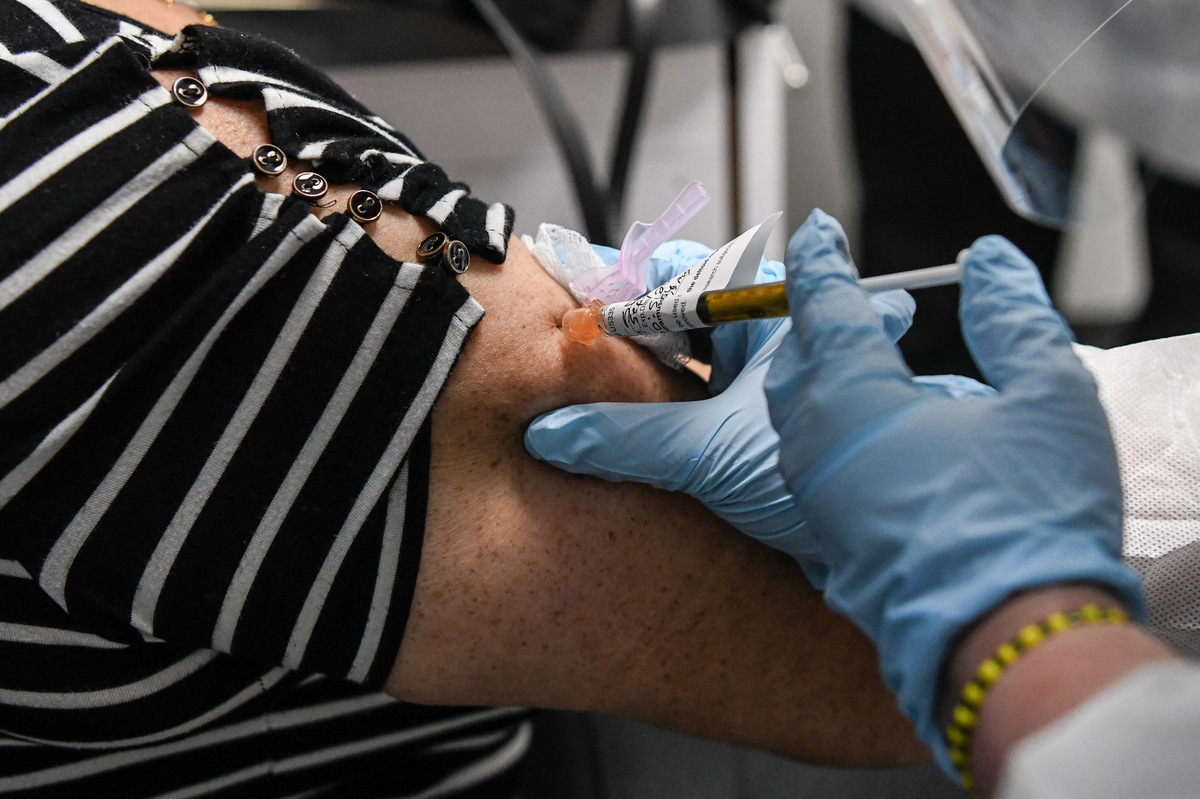 While coronavirus vaccine trials are ongoing and a U.S. vaccine has yet to be approved, state health officials are planning ahead for how to eventually immunize a large swath of the population.

Updated at 1 pm, to include comment from the White House and the Department of Health and Human Services

Even the most effective, safest coronavirus vaccine won't work to curb the spread of the virus unless a large number of people get immunized. And getting a vaccine from the manufacturers all the way into people's arms requires complex logistics — and will take many months.

Now, public health officers across the country are rushing to finish up the first draft of plans for how to distribute a coronavirus vaccine if and when it is authorized, and they're grappling with a host of unknowns as they try to design a system for getting the vaccine out to everyone who wants it.

The Centers for Disease Control and Prevention gave state immunization managers only 30 days to draft a comprehensive COVID-19 vaccine distribution plan. Friday is the day those plans are due.

The timing of vaccine research and planning is politically fraught with the presidential election a few weeks away. When the CDC announced the October deadline last month, critics worried that political pressure was tainting the process, since President Trump has repeatedly promised a vaccine will be ready soon.

"If you listen to the White House, [vaccine distribution] could be just a matter of weeks away," New York Gov. Andrew Cuomo told reporters on Thursday. He and Arkansas Gov. Asa Hutchinson sent a letter to Trump on behalf of the National Governors Association asking for a meeting to talk through the many unanswered questions about the process.

"We need to know: What is the plan? What does the federal government do, what do you expect the states to do? When does it start? Who funds it?" Cuomo said. "Let's figure it out now because this virus has been ahead of us every step of the way — it's about time this country catches up."

In a written response to the governors on Friday, Trump administration official Douglas Hoelscher said the White House has already provided states with several opportunities to discuss plans for vaccine distribution, and that a meeting with Health and Human Services Secretary Alex Azar was being arranged.

For dozens of public health officials across the country, the process over the past month has been like "herding a lot of cats," says Claire Hannan, director of the Association of Immunization Managers. "It's really cramming three to six months worth of strategic discussions ... into 30 days," she says.

States need to lay the groundwork for distribution now, says James Blumenstock, vice president for pandemic response and recovery for the Association of State and Territorial Health Officials. That means deciding who's in charge of responsibilities such as ordering supplies, signing up vaccine providers, training staff, and running mass vaccination clinics and outreach campaigns, he explains. They'll also need a data management system to track who received an initial vaccine dose and to remind them to come back for their second dose.

"We have been working feverishly over the past few weeks," says Decrecia Limbrick, assistant director of the Department of Health in Houston, which is one of several large cities that receives funding directly from the CDC. "I think we're ready to submit a plan — a 'Version 1' of a plan."

Then there are conflicting messages from the Trump administration. "Originally there had been talk about hurrying up and getting your plan done because the vaccine will be ready before the election," says Kris Ehresmann, director of infectious disease for Minnesota's Department of Health. When the Food and Drug Administration recently said that vaccine trials must allow two months after the last experimental dose is administered, that guidance "changes the timeline" again.

"It's pretty much like being in a continuous earthquake," she adds. "The ground is constantly moving."

Despite the tight timeline, "all jurisdictions appear to be on target to meet the [Friday] deadline," Michael Pratt, spokesperson for the U.S. Department of Health and Human Services, wrote in a statement to NPR. "Once received at CDC, we will conduct a review of the draft plans and provide feedback to jurisdictions in the next two weeks. The team reviewing each plan will include CDC and [Department of Defense] staff."

Pratt noted that CDC has been holding weekly conference calls with immunization managers, and has already "answered nearly 400 distinct questions from states."

Adding to this uncertainty is the likelihood that the first coronavirus vaccines will be extremely challenging to handle. The CDC playbook notes that the vaccines will likely require cold chain storage (possibly "ultra-cold" storage, which is colder than Antarctica), must be given in two doses a certain number of days apart, and could have a minimum order of 1,000 doses.

"For routine vaccines, [providers] will order 10 doses at the time or 20 doses at a time," explains Michigan Department of Health and Human Services immunization director Bob Swanson. "It makes it more difficult to think about — how are we going to use a thousand doses for at risk populations across a rural county?"

Initially, the focus will be on the priority groups who will be first in line to get immunized. The specifics of who that will be are still getting worked out by a CDC advisory committee, although front-line health workers will almost certainly be at the top of the list. There are also concerns about distributing the vaccine equitably to communities that, for instance, speak different languages or are difficult to reach, especially at first when doses are limited.

As immunization managers look ahead to the coming year, different places around the country face a range of challenges.

Then there are seasonal issues. During a North Dakota winter, freezing temperatures and snowfall make outdoor drive-through clinics untenable, says Molly Howell, North Dakota's immunization program manager, so they're considering using warehouses or sporting venues for mass vaccination campaigns so that people can gather indoors while maintaining physical distance. "Those are some of the ways that we're trying to be creative about vaccinating people safely during the pandemic," she says.

In Houston, officials are thinking ahead to the complications of the hot and humid summer. "If we get those hot days, we want to obviously ensure that we maintain the integrity of the vaccine," says Limbrick of the Houston Department of Health, and they have to think about taking care of the medical staff who have to administer the vaccine in those conditions.

"After [health officials] push that button on Friday afternoon, on Saturday morning, they're going to continue to work on their planning efforts going forward over the days and weeks and months ahead," says Blumenstock of ASTHO. And when the first vaccine is authorized, "it's going to be close to a yearlong effort," he says, to immunize everyone across the country who wants to be vaccinated.

Finding the money to execute plans

"This is going to take substantial resources," Redfield told lawmakers. "The time is now for us to be able to get those resources out to the state[s]."

On Thursday, ASTHO and the Association of Immunization Managers wrote a letter formally requesting $8.4 billion from Congress for these efforts.

The letter notes that so far the CDC has distributed $200 million to states, territories and a few large cities to fund the vaccine planning process — but it describes this sum as "merely a down payment." And with the election looming, the chances of a new COVID-19 relief bill getting through the legislature anytime soon are dim.

Michigan has received $5.9 million so far, and Swanson says that money has gone to getting the state's immunization registry up to speed, and to local health departments for staffing.

States need additional funds to be able to carry out the plans they're submitting to the CDC, she says. "They need to be able to invest in manpower, in I.T. systems and in the people to use them," she explains, adding that those who are brought in to run the vaccination campaigns from other parts of the health department like STD clinics and family planning will also need to be backfilled.

"A lot of things need to be paid for with these billions of dollars," she says. "Even the best laid plans can't be executed if you don't have the resources to do so."