Accessibility links
Hospital Bills For Uninsured COVID-19 Patients Are Covered Under The CARES Act : Shots - Health News The CARES Act provides funds to pay medical bills for uninsured COVID-19 patients. But a young man's death in Nashville, Tenn., shows people often don't know about the program until it's too late.

3:58
Hospital Bills For Uninsured COVID-19 Patients Are Covered, But No One Tells Them 3:58 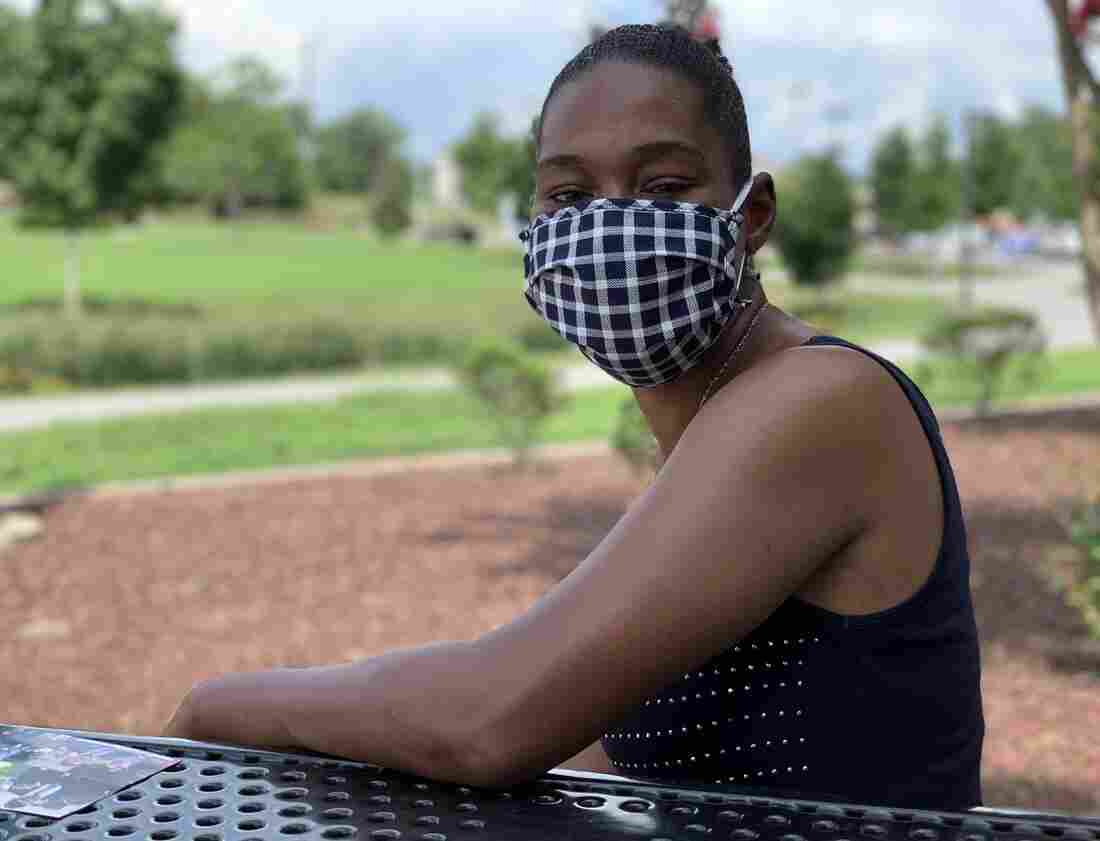 When Angela Settles' husband, Darius, got sick with COVID-19, he was worried about medical bills. He worked two jobs but had no health insurance. Blake Farmer/WPLN News hide caption 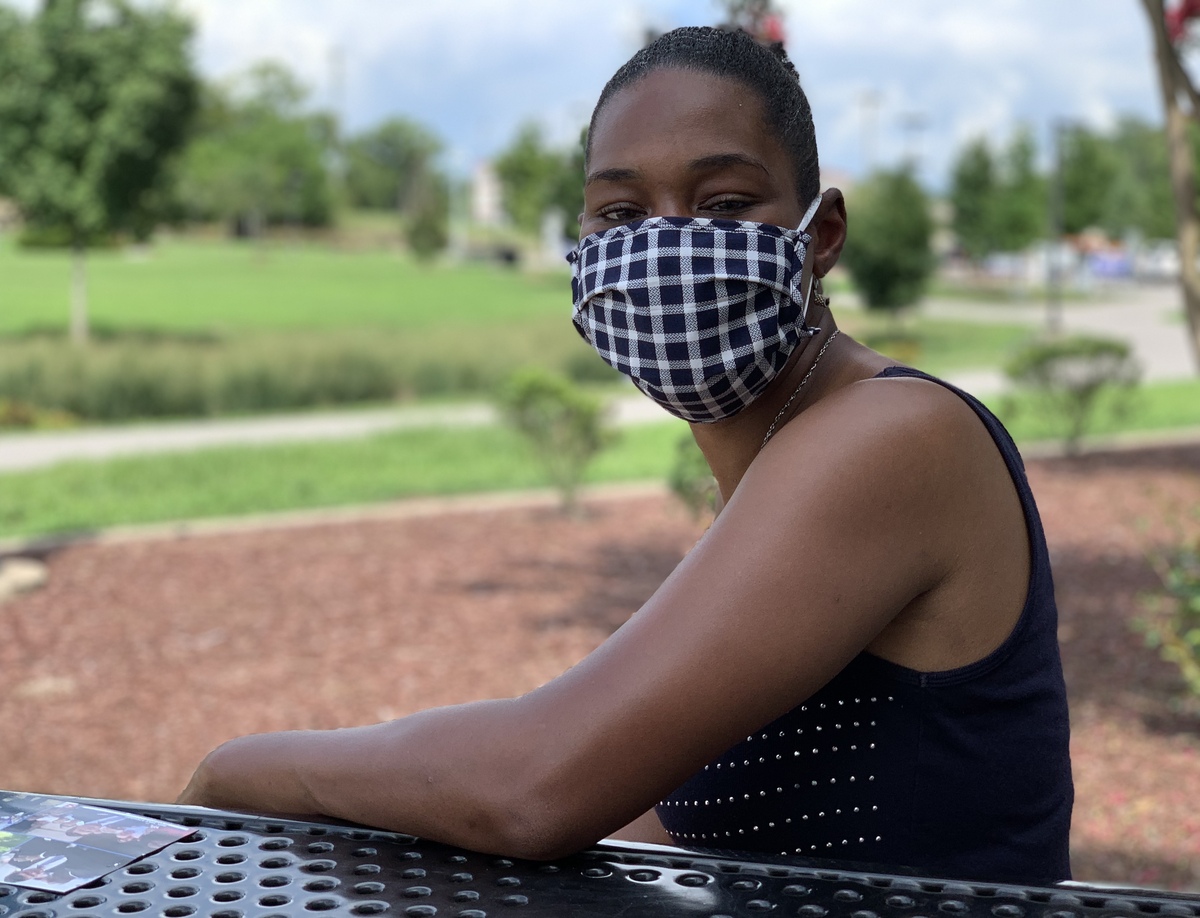 When Angela Settles' husband, Darius, got sick with COVID-19, he was worried about medical bills. He worked two jobs but had no health insurance.

When Darius Settles died from COVID-19 on the Fourth of July, his family and the city of Nashville, Tenn., were shocked. Even the mayor noted the passing of a 30-year-old without any underlying conditions — one of the city's youngest fatalities at that point.

Settles was also uninsured and had just been sent home from an emergency room for the second time, and he was worried about medical bills. An investigation into his death found that, like many uninsured COVID-19 patients, he had never been told that cost shouldn't be a concern.

Back at the end of June, Settles and his wife, Angela, were both feeling ill with fevers and body aches. Then Darius took a turn — bad enough that he asked his wife to call an ambulance.

"My husband is having issues breathing and he's weak, so we're probably going to need a paramedic over here to rush him to the hospital," she told the operator, according to the 911 recordings obtained by WPLN News.

Darius Settles was stabilized and tested for the coronavirus at the hospital, according to his medical records. The doctor sent him home with antibiotics and instructions to come back if things got worse.

Three days later, they did. And now he also knew he had COVID-19; his test results were in.

But Settles was also between full-time jobs, playing the organ at a church as he launched a career as a suit designer. So he had no health insurance.

His wife, who works for Tennessee State University, says he was worried about costs as he went back to the hospital a second time; she tried to reassure him

When he returned to TriStar Southern Hills Medical Center, owned by the for-profit hospital chain HCA, physicians tested his blood oxygen levels, which are usually a first sign that a COVID-19 patient is in trouble. They had dropped to 88%. An X-ray of his lungs "appears worse," the physician wrote in the record.

But the doctor also noted that his oxygen saturations improved, and he was breathing on room air after a few hours in the emergency room. The records show they discussed why he might not want to be admitted to the hospital since he was otherwise young and healthy and didn't note any risk factors for complications.

And when Angela Settles called to check in, he seemed to be OK with leaving despite his persistent struggle to breathe.

Angela Settles was surprised since her husband was the one who wanted to go to the hospital in the first place.

At first, she thought the hospital just didn't want to admit a man without insurance who would have trouble paying a big bill. But TriStar Southern Hills admits hundreds of patients a year without insurance — more than 500 in 2019, according to a spokesperson.

And in this case, the federal government would have paid the bill. But no one said that when it might have made a difference to Darius Settles.

Message never makes it to patients

TriStar, like most major health systems, participates in a program through the Centers for Medicare and Medicaid Services in which uninsured patients with COVID-19 have their bills covered. It was set up through the pandemic relief legislation known as the CARES Act.

But TriStar doesn't tell its patients that upfront. Neither do other hospitals or national health systems contacted by WPLN News. There's no requirement to, which is one of the program's shortcomings, says Jennifer Tolbert of the Kaiser Family Foundation who studies uninsured patients. (KHN is an editorially independent program of the foundation.)

"This is obviously a great concern to most uninsured patients," Tolbert says. Her research finds that people without insurance often avoid care because of the bill or the threat of the bill, even though they might qualify for any number of programs if they asked enough questions.

Tolbert says the problem with the COVID-19 uninsured program is that even doctors don't always know how it works or that the program exists.

"At the point when the patient shows up at the hospital or at another provider site, it's at that point when those questions need to be answered," she says. "And it's not always clear that that is happening."

Among clinicians, there's a reluctance to raise the issue of cost in any way and run afoul of federal laws. Emergency rooms must at least stabilize everyone, regardless of their ability to pay, under a federal law known as the Emergency Medical Treatment and Labor Act, or EMTALA. Asking questions about insurance coverage is often referred to as a "wallet biopsy," and can result in fines for hospitals or even being temporarily banned from receiving Medicare payments.

Physicians also don't want to make a guarantee, knowing a patient still could end up having to fight a bill.

"I don't want to absolutely promise anything," says Ryan Stanton, an ER physician in Lexington, Ky., and a board member of the American College of Emergency Physicians.

"There should not be a false sense that it will be an absolute smooth path when we're dealing with government services and complexities of the health care system," he says.

"Could I have done more?"

Darius Settles knew he was in bad shape. But he didn't attempt to make a third trip to the hospital. Instead of 911, he called his father, pastor David Settles, and asked his father to come pray for him.

When the elder Settles replied that he was always praying for his son, Darius said, "No, I really need you to pray for me. I need you to get the oil, lay hands on me and pray," David Settles recalls, and so he went, despite concern for getting COVID-19 himself.

He sat by his son's side. Darius' wife made some peppermint tea, and when they put it to his lips, Darius didn't sip. They thought he had fallen asleep. But he was unconscious.

At that point, they called 911 again and the operator instructed them to get Darius to the floor and perform chest compressions until paramedics arrived.

Pastor Settles was back in the pulpit just a few weeks later, preaching on suffering and grief after the death of his son, "whom I watched as the breath left his body," he told his congregation. "The Lord gives, and the Lord takes away."

Darius Settles left behind his own son, who was 6. And his widow's head is still spinning. She says she can't shake a sense of personal guilt.

"Could I have done more?" Angela Settles asks. "That's hard, and I know that he would not want me to feel like that."

She wonders, too, if the hospital could have done more for him. And even after failing to disclose its policy for uninsured COVID-19 patients, it did send her a bill for part of her husband's care. Asked why, a TriStar spokesperson says it was sent in error and does not have to be paid.

This story is from a reporting partnership that includes WPLN, NPR and KHN.