Accessibility links
Fighting A High Medical Bill Takes Tenacity And Health Insurance Know-How : Shots - Health News When the hospital tried to bill her for more than what she'd been quoted, Tiffany Qiu refused to pay the extra amount and the bill went to collections. She still didn't back down. 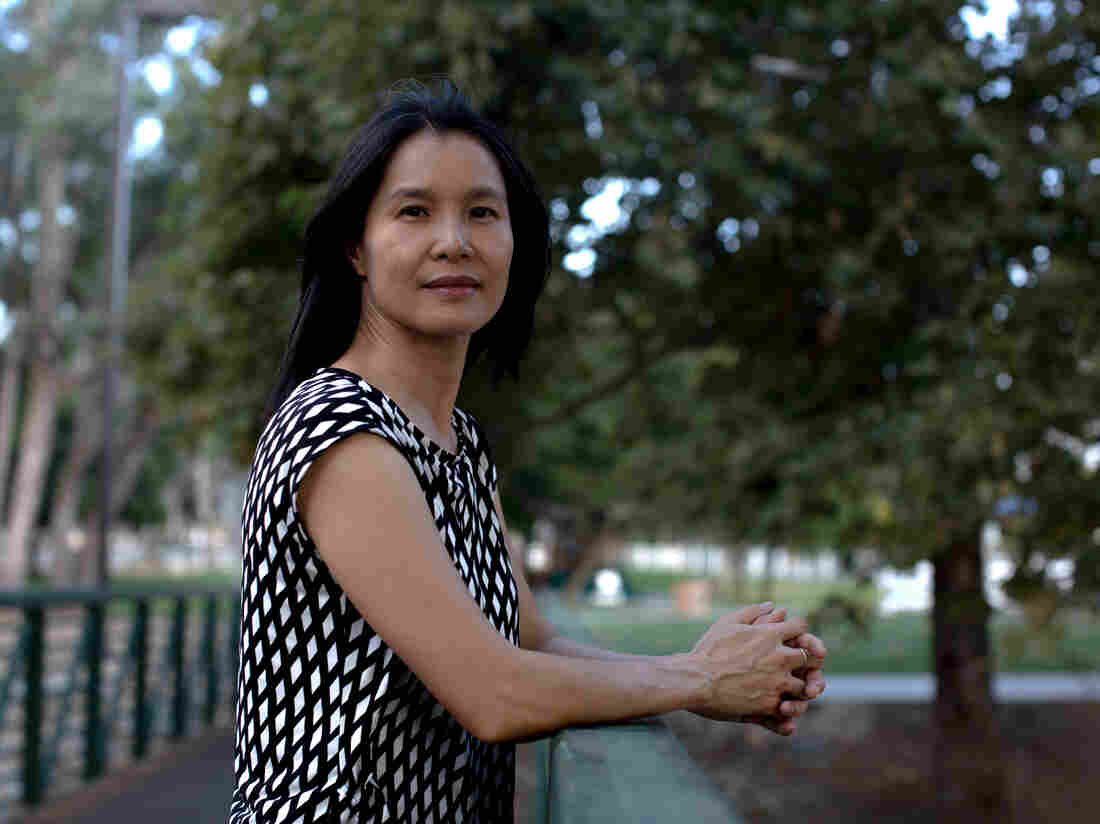 When Tiffany Qiu found herself on the hook for her usual 30% Blue Shield of California coinsurance after the hospital quoted 20%, she pushed back. Shelby Knowles for KHN hide caption 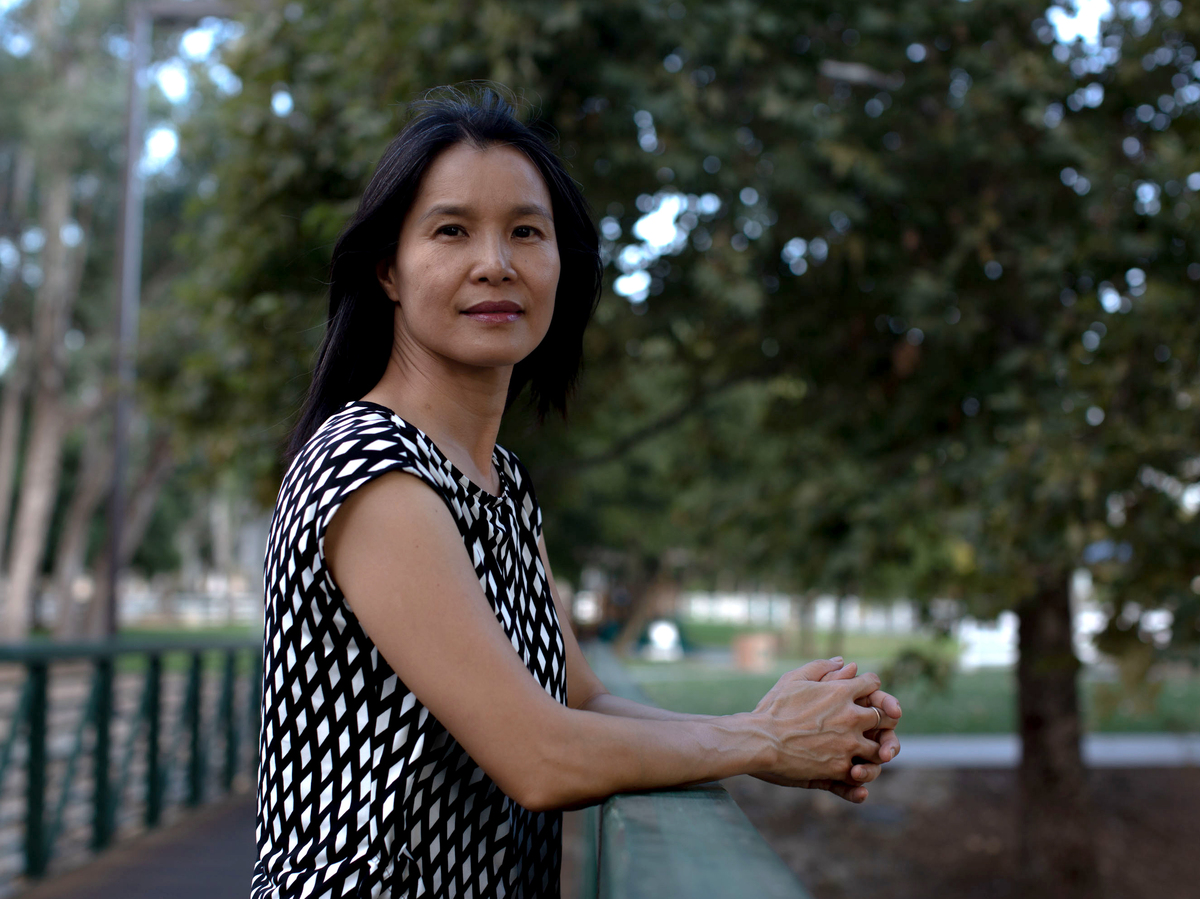 When Tiffany Qiu found herself on the hook for her usual 30% Blue Shield of California coinsurance after the hospital quoted 20%, she pushed back.

When Tiffany Qiu heard how much her surgery was going to cost her, she was sure the hospital's financial department had made a mistake. Qiu already knew from a breast cancer scare earlier that year that her plan required a 30% coinsurance payment on operations, so she pressed the person on the phone several times to make sure she had heard correctly: Her coinsurance payment would be only 20% if she had the procedure at Palomar Medical Center in Poway, Calif., about 38 miles south of where Qiu lives.

"I was kind of in doubt, so I called them a second time," said Qiu. "They gave me the exact same amount."

Qiu had been diagnosed with uterine polyps, a benign condition that was making her periods heavier and more unpredictable. Her OB-GYN proposed removing them but said it was safe to wait. Qiu said that she asked about the possibility of doing it in the doctor's office under local anesthesia to make the procedure cheaper, but that her doctor rebuffed her suggestion.

Because Qiu thought she was getting a deal on her usual 30% share of the bill, she decided to go ahead with the polyp removal on Nov. 5, 2019. As she sat in the waiting room filling out forms, staffers let her know she needed to pay in full before the surgery.

Unease set in. The hospital asked for the 20% coinsurance — $1,656.10 — that she had been quoted over the phone, but Qiu hadn't been told she needed to pay on the day of the procedure. As she handed over her credit card, she confirmed one more time that this would be her total patient responsibility, barring complications.

The surgery was over in less than 30 minutes, and she walked out of the hospital with her husband feeling perfectly fine.

Patient: Tiffany Qiu is a 49-year-old real estate agent and mother of two who lives in Temecula, Calif. Her family of four is covered by a Blue Shield of California policy that she and her husband purchased on the marketplace. Last year, they paid a $1,455 monthly premium, with an individual annual $1,850 deductible and an individual out-of-pocket maximum of $7,550.

Because Qiu had already paid $1,873.20 on the day of surgery, the hospital billed her an additional $933.87, which meant Qiu was on the hook for the remainder of her 30% coinsurance.

These figures don't include the fees Qiu paid for anesthesia or her doctor's services.

Care provider: Palomar Medical Center in Poway is one of three hospitals in the Palomar Health system. Palomar Health is a San Diego County public health care district, which means the health care facilities are nonprofit and receive property taxes as a portion of their revenue stream. The system is governed by a board of directors elected from within the district's boundaries.

What gives: Hospitals and surgery centers sometimes offer discounts if patients are uninsured and able to pay with cash or a credit card. Physicians may even offer discounts on a patient's share of the costs if they know the patient is unemployed or has fallen on hard times. But regularly offering discounts to attract patients is not common and could even be fraudulent if the patients are insured through Medicare, said Paul Ginsburg, director of the USC-Brookings Schaeffer Initiative for Health Policy.

In Qiu's case, the hospital seemed to be offering a discount on the insurer's normally required coinsurance.

"The hospital would be in breach of their contract with the insurance if they did not bill her for that amount," said Martine Brousse, a California-based patient advocate and medical billing consultant for AdvimedPRO. "She owes what the insurance has calculated, and the facility has every right to demand payment."

She Went To The ER To Try To Get A Coronavirus Test And Ended Up $1,840 In Debt

Copayments and coinsurance exist, in theory, so patients have "skin in the game." They have to pay a clearly defined portion of the cost of their care, according to their policy, so they will shop around and use medical care judiciously (though many health experts say coinsurance amounts have gotten so high that many cannot afford them).

Another thing to note is how much the hospital billed Qiu for a simple outpatient procedure: $22,219.64. That amount is "totally laughable," said Dr. Merrit Quarum, founder of WellRithms, a company that works with self-funded employers and other clients to make sense of complex medical claims.

Not only is the charge far out of line with what that procedure typically costs in that region (about $5,500), but Qiu is now stuck paying a larger amount as her share under the terms of her insurance. This is how those "sticker prices" that few people pay still drive up costs for individuals.

Resolution: If she hadn't been quoted 20%, Qiu said, she would have shopped for a better deal. She flies to China often to visit her mother and was open to getting the surgery done there.

Qiu called the hospital to ask why she was being billed a second time, despite the lack of complications during the surgery. She remembers the back-and-forth over the remaining bill was exhausting, especially because it happened over the holidays.

"I got tired and said, 'I don't want to play this game anymore,'" Qiu recalled. "'If you want to send it to collections, you can do it, but I'm not going to pay for it.'"

The bill landed at a collection agency called IC System. In a May 23 phone call, Qiu said, a representative offered to slash the remaining bill by 25% if she would just pay that day.

But Qiu refused, though she could afford to pay. She's undaunted by the risk the unpaid bill poses to her credit score, preferring instead to fight the hospital on behalf of other patients who may not have the time or luxury to persist.

The experience left her feeling as if the hospital offered her a fake discount to reel in her business. "I double-checked and tripled-checked with them," Qiu said. "They have financial departments that should be verifying this with my insurance company."

After a reporter's call, Palomar Health looked back at phone records, confirmed Qiu's version of events and said a hospital staffer had made a mistake by quoting her a 20% cost-sharing obligation. That percentage then got automatically put into her patient notes and was on the bill of estimated costs she signed and paid on the day of surgery, even though it was incorrect.

They apologized for giving the mistaken impression that Qiu was getting a discount. Staff members are not authorized to offer discounts when providing estimates, said Derryl Acosta, a spokesman for Palomar Health.

Acosta also pointed out other communication breakdowns, like dropping the complaint Qiu phoned in after she received the second bill in late November. Her issue did not get put into the standard customer complaint process, which would have elevated the problem and triggered an investigation into the phone records. That's why Qiu's bill was sent to the collection agency.

"We definitely admit that the call should have been handled differently," Acosta said. "We now have a new call center that we believe will handle this type of call better."

Because Palomar Health was able to see in its phone records that a staffer had confirmed the erroneous 20% coinsurance amount to Qiu, the health system will change her bill to reflect what she was promised. Qiu will get a statement in the mail saying she has a zero balance, Acosta said.

The takeaway: Multiple medical billing advocates who reviewed Qiu's case praised her for her tenacity in calling the hospital financial department twice before the procedure. But as she acknowledged, most people don't have the time or spine to fight.

To avoid such situations, experts advised, patients should check in with their insurer about the discounts offered, as hospital staffers may be poorly trained or ill informed.

If a patient hears conflicting information about charges before a procedure, they need to approach their insurer to confirm the details of their own policy, said Brousse, the patient advocate.

The simple fact that a hospital staffer misinformed a patient isn't a legal reason to force a hospital to lower a bill, Brousse said.

Also, get promises in writing — before the day of surgery. Make sure the offer is explicit about which services are included and what might count as a complication. Ask whether you'll have to pay upfront.

"Even though she tried to be diligent, obviously she still didn't know that she would need to get something that was legally enforceable," said Gupta.

Dan Weissmann, host of the podcast "An Arm and a Leg," reported the radio interview of this story. Joe Neel of NPR produced the interview with KHN Editor-in-Chief Elisabeth Rosenthal on "Morning Edition."

Bill of the Month is a crowdsourced investigation by KHN and NPR that dissects and explains medical bills. Do you have an interesting medical bill you want to share with us? Tell us about it!