Accessibility links
Is It Possible To Protect Preexisting Conditions Without The ACA? : Shots - Health News Though the Trump administration is trying to dismantle the Affordable Care Act in court, it's vowed that people with health problems will still be able to get insured. Here's why that could be tricky. 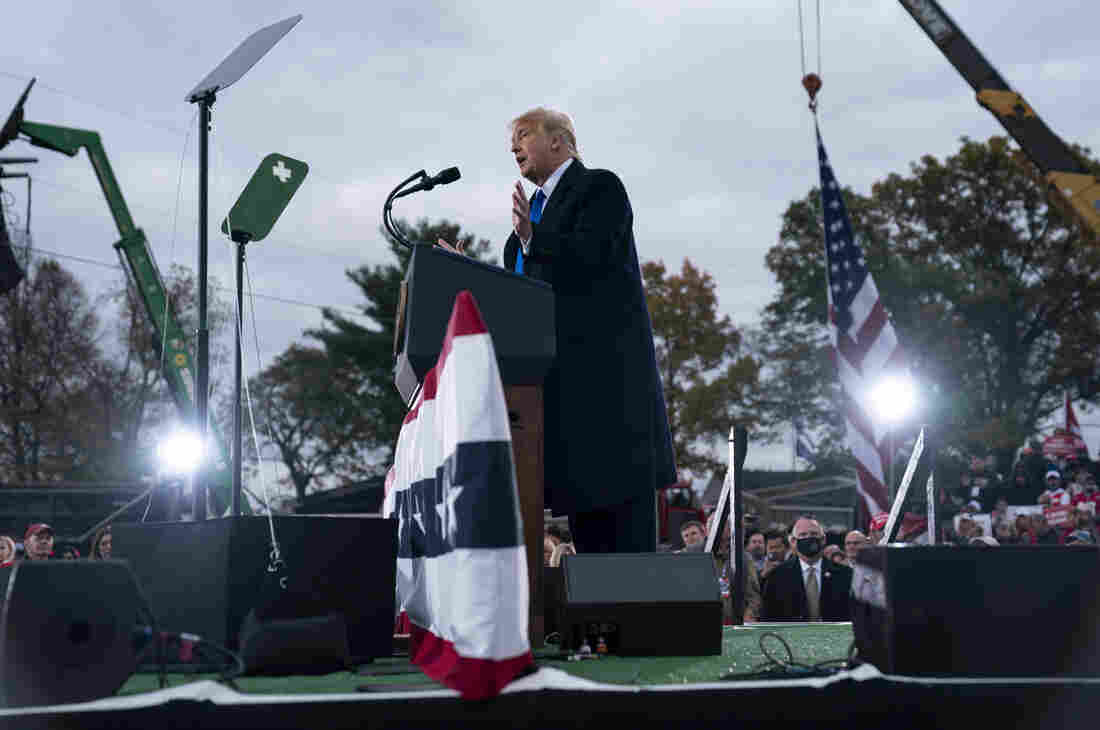 President Trump has promised at campaign rallies to protect patients with preexisting conditions, but he has not explained how he plans to do that. Evan Vucci/AP hide caption 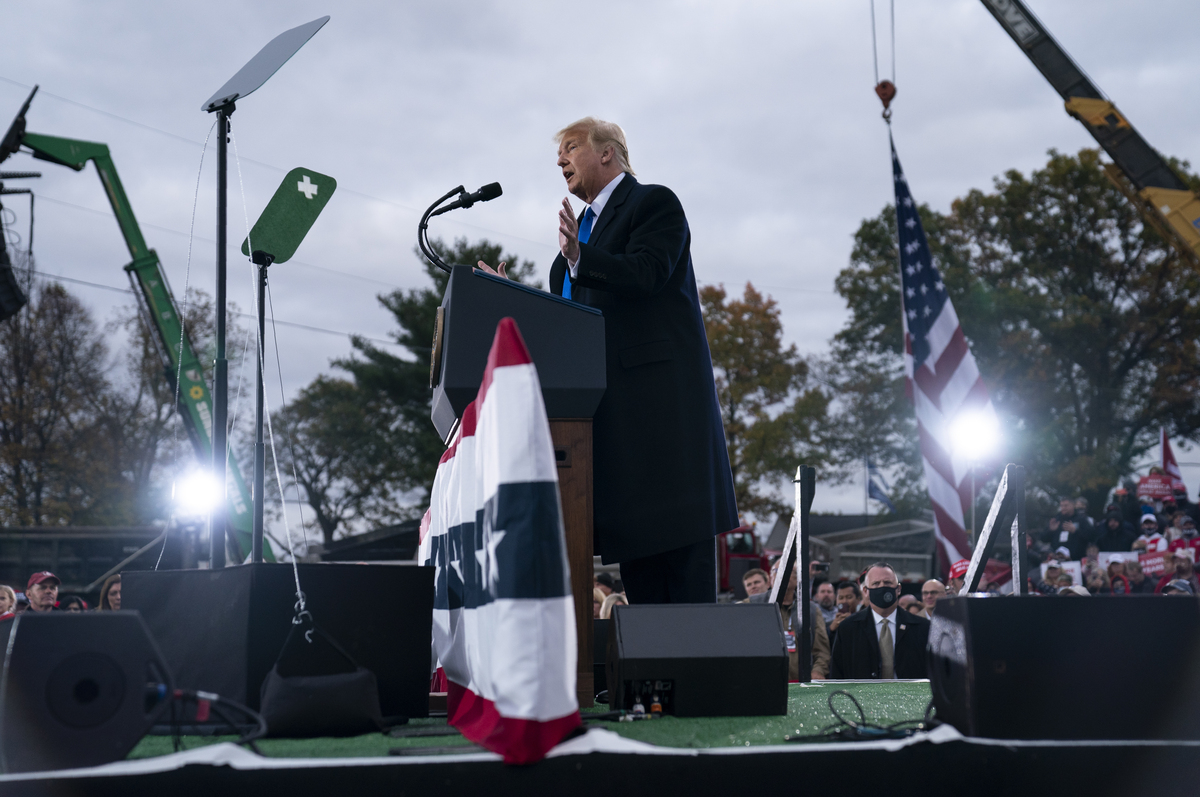 President Trump has promised at campaign rallies to protect patients with preexisting conditions, but he has not explained how he plans to do that.

President Trump has tried to get rid of the Affordable Care Act since the first day of his presidency, but there's one part of Obamacare that he wants to preserve.

"We will always protect patients with preexisting conditions — always," Trump told a campaign crowd on Sunday in Londonderry, N.H. It's a message he has shared repeatedly in the final days and weeks before the presidential election.

He said it again in an interview with CBS' Lesley Stahl that aired Sunday on 60 minutes: "We won't do anything — and no plan — unless we have preexisting conditions covered."

A "preexisting condition" refers to any health issue someone has before they sign up for a health insurance policy — from high blood pressure to pregnancy to allergies. Before the Affordable Care Act, it was perfectly legal for health insurers to deny coverage to people with such conditions.

An estimate from the Kaiser Family Foundation suggests that about 54 million people have conditions that — without legal protections — could prompt health insurers to deny them policies. Polls show this is one of the most popular provisions of the law, across the political spectrum.

Although Republicans failed to repeal the ACA in 2017, Trump now has another chance to strike it down; his administration will argue that the law must "fall" at the Supreme Court on Nov. 10, just one week after the election. The addition of Justice Amy Coney Barrett to the court could make this Supreme Court challenge more likely to succeed than two previous attempts.

If the law does fall, Congress and the administration would have to act fast to protect people with preexisting conditions. But actually making a law that does that is harder than it sounds. Here's why it's so tricky and how Trump might look to address the problem if he's elected for a second term.

To understand this problem, you have to time travel to pre-ACA times, says Sabrina Corlette, co-director of the Center on Health Insurance Reforms at Georgetown University.

Before the ACA, "one of the essential business models for health insurance companies was to discourage risky people from buying into their plans and get as [many] healthy people as they could," she explains. That way, "they could get the premium revenue and not have to pay out as much in medical claims."

When you applied for a private health plan as an individual — as opposed to getting insurance through your job or a public plan like Medicare — insurers would usually require you to fill out a questionnaire and ask for permission to look through your medical records.

If they found a health condition that concerned them, Corlette explains, there were three things they could do.

To stop insurance companies from doing this, the Affordable Care Act needed to come up with a way to keep enough healthy people in the market to balance out the cost of covering more expensive, sick people.

Think about fire insurance, says Larry Levitt, executive vice president for health policy at the Kaiser Family Foundation. "If you let people insure their house once it's already on fire, everyone's going to wait until their house is on fire to buy insurance. It's a similar problem in health care: If you tell people with preexisting conditions that they're guaranteed access to insurance, people who are healthy will tend to wait to buy insurance until they get sick."

If the insurance market is made up of sick people who need lots of medical care, "premiums skyrocket into what's known as a death spiral," he says.

So, the people who crafted the Affordable Care Act came up with incentives to get more healthy people into the insurance pool. "The ACA had a carrot and stick," says Levitt. "The carrot was subsidies provided to low- and middle-income people that made insurance a good value, and the stick was the individual mandate."

In 2017, Republicans in Congress changed the individual mandate's penalty to $0 as part of the tax bill. (The fact that the penalty is zero dollars is the basis for the legal challenge soon to be argued before the Supreme Court.)

Even without the threat of a fine for not having insurance, though, "the carrot of the subsidies is still in place and has been very effective at keeping premiums stable," Levitt says.

As Trump pointed out during Thursday's debate, "premiums are down, everything's down." Enough healthy people are buying plans in the private market to keep premiums from skyrocketing, although critics still argue that high plan costs price people out of the market.

The challenges of alternate solutions

So without the ACA, how would Trump and his allies prefer to approach the problem?

"We don't know where the president is on this," says Douglas Holtz-Eakin, president of the American Action Forum, a conservative think tank. Trump did sign an executive order related to preexisting conditions in September, but all it did, Holtz-Eakin says, "was to say very firmly that the [health] secretary is going to have to figure this out."

There are other ways to incentivize healthy people to pay for health insurance. For Republicans, "the leading alternative approach has been continuous coverage provisions," Holtz-Eakin says. This idea has been part of Republican ACA replacement bills before — people could be charged a fee and potentially be locked out of the market if they have a break in coverage, thus presumably motivating the young and healthy to stay consistently insured.

Holtz-Eakin says the promise of this model is that "an insurer has a stake in more than one year of your life — so there are now incentives to cover prevention more than there would be otherwise." Critics have argued that could actually disincentivize healthy people who don't have coverage from joining the market and hurt low-income people who already have trouble finding and maintaining health insurance.

Another Republican idea is to go back to "high risk pools," which were common before the ACA. This divides the market into healthy people and sick people. That way, healthy people can pay lower premiums, but the pool for sick people gets expensive fast. Monthly premiums — even if they're very high — from the limited pool of sick people would not pay for all their care, meaning the government and insurance companies would have to step in to cover costs.

Of course, on the other side of the political spectrum, there's the idea of "Medicare for All," where everyone is covered in a government-funded plan. That would ensure people with preexisting conditions can be covered, says Levitt, but that's an idea the Trump administration would never go for.

If the Affordable Care Act is fully struck down by the Supreme Court without a replacement, "the preexisting condition protections go away," Corlette says, along with the insurance marketplaces, Medicaid expansion, premium subsidies and more. As a result, a recent Urban Institute analysis projected that 21.1 million could lose health coverage, a nearly 70% increase in the number of uninsured.

Another concern: COVID-19 might be considered a preexisting condition by insurance companies. That could mean millions more people affected by changes to these rules because of the pandemic.

There are a lot of outstanding questions. Would the Supreme Court justices give Congress a few months to come up with a fix to the ACA or pass a new law to prevent the coverage losses? Would the court make a narrow ruling that kept most of the law intact? Would it rule against the challengers, keeping the ACA as it is?

Without the ACA or another federal law requiring insurance companies to cover everyone regardless of their health, they would almost certainly "revert back to their business model of yore," says Corlette. "The incentives for them to start underwriting again and getting rid of high cost, high risk people are too strong."

As an example, if you're an insurance company in a city with two competing insurers, "and you're the only one that is still taking sick people and enrolling them, you will quickly find yourself with the highest premiums, the fewest enrollees, and and you'll be losing money compared to your competitors," she says.

This is not what insurance companies want. Insurance industry group America's Health Insurance Plans submitted an amicus brief to the Supreme Court arguing that the ACA should not be struck down.