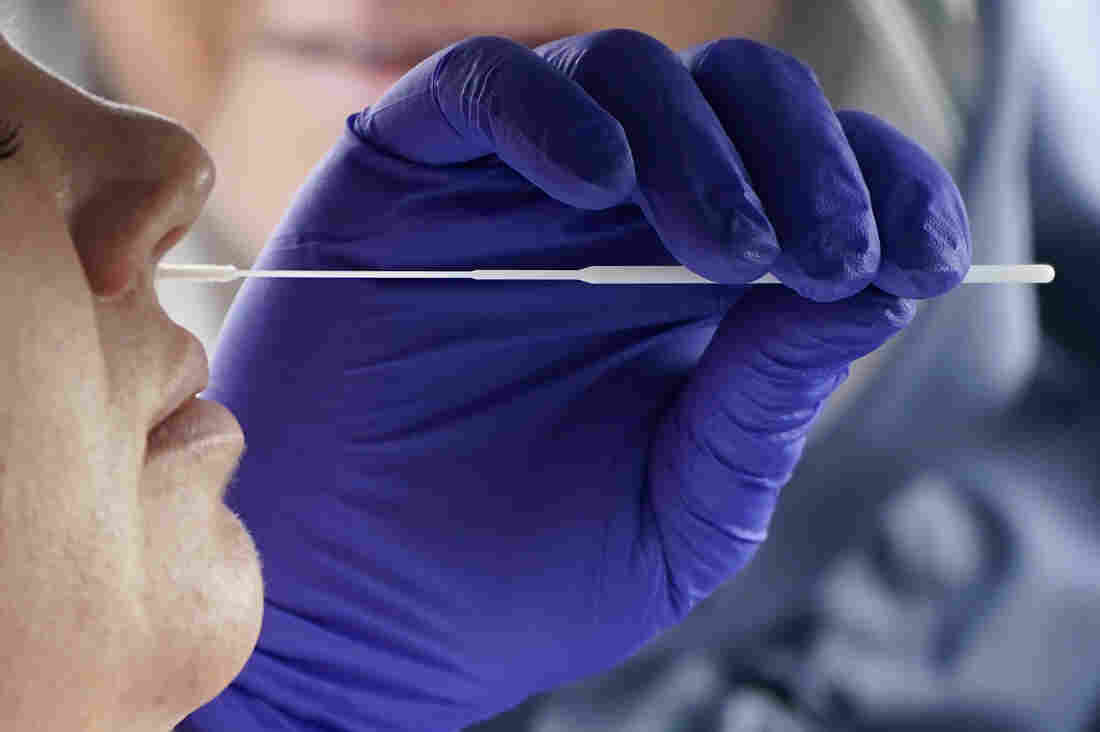 Coronavirus cases are rising precipitously in the U.S., and have now surpassed the high levels logged in the summer when daily new cases hovered above 65,000 on average for nearly two weeks.

After a dip in new cases in September, the country now is logging an average of nearly 72,000 new cases a day, and health experts worry this surge could last longer and grip more of the country than in the spring or summer. And the average daily case count has climbed 41% over the past two weeks, according to an NPR analysis.

"The trend line looks quite vertical," says Dr. Jessica Justman, an associate professor of medicine in epidemiology at Columbia University's Mailman School of Public Health. "It looks like this third surge is on track to be higher than the one in late July."

On Friday, the U.S. recorded the most new cases in a single day — more than 83,000, followed by almost as many on Saturday. While new cases were lower Sunday and Monday, the trend line — the seven-day rolling average — is rising steeply.

"It's a lot of states that have very brisk rises in their cases," says Justman.

The number of people being hospitalized for COVID-19 is also climbing in most states. More than 44,000 people are currently hospitalized, two-thirds of what was recorded during the summer peak, and is the highest since mid-August, according to data gathered by the COVID Tracking Project.

The sharp jump in cases has hospitals on edge.

"We may see a surge like we have not seen yet, and that is very troubling," says Dr. Bruce Siegel, president of America's Essential Hospitals, which represents more than 300 safety-net hospitals.

Siegel fears the holiday season will only fan the outbreak as people travel and spend more time inside together: "We are in the red zone for danger."

One brighter note: The U.S. daily death toll from COVID-19 is about 800 on average over the past seven days, which is still lower than what was seen during the spring and summer surges.

Justman says she believes improvements in clinical care will keep the mortality rate lower for patients who are hospitalized than what was seen earlier in the pandemic. But more tragedy is coming.

"I think as the case count rises, it's inevitable that the number of deaths will go up," she says.

Regional flare-ups from a high baseline

The Midwest is in the grips of its worst surge since the pandemic began, and case growth there is driving up national numbers. It now has more cases per capita than either the Northeast or the South did during their spring and summer surges, according to an analysis by the Covid Tracking Project.

Wisconsin and Illinois each account for around 30,000 cases in the past week, according to the CDC, on par with California — a state with more than twice the population of those two states combined. North and South Dakota have more cases per capita than anywhere else in the country, followed by Wisconsin and Montana.

But increasingly the outbreak is growing in other regions, too.

Daily infections have risen by 41% in the West and 48% in the Northeast over the past 14 days, according to an NPR analysis.

All this adds up to a fall surge that is on track to dwarf the spring.

"We're starting off of a higher baseline of transmission, and so this peak is going to go higher than the last one," says Dr. Lynn Goldman, dean of the Milken Institute School of Public Health at the George Washington University.

In fact, the low point in new daily cases in September — around 35,000 U.S. cases a day — was close to the high point during the spring, when the virus was concentrated in the Northeast and a handful of urban centers.

In the summer, infections were concentrated in the Sunbelt, with states like Texas, Arizona, Florida and California adding the bulk of cases. For weeks in a row, that surge led to over 65,000 new daily cases nationally on average and then slowly tapered down.

Where U.S. cases are today on average is near where they leveled off in the summer, says Goldman, "and I'm not sure that we can count on that happening quite as early at this point."

After plateauing in August, total U.S. cases picked up in early September — a warning of what public health experts predicted would be a third surge during the colder months.

Goldman anticipates the fall and winter increase to be more devastating.

"We have just more coronavirus out there in more communities, then there's the change in season and people have become more fatigued with the response to the pandemic," she says.

The change in weather as fall moves along is likely contributing to the uptick in cases, and that will persist throughout the fall and winter, says Art Reingold, professor of epidemiology at the University of California, Berkeley.

"People are not going to be outside as much as they were in the summer. And clearly, in many areas, there is a great resistance to masks and social distancing," says Reingold. "We certainly have a substantial risk that we'll see resurgences even in cities and areas that have been doing a good job in the last couple of months."

While testing varies from day to day, the number of tests have grown modestly in the past two months. The U.S. averaged about 760,000 coronavirus tests each day in September compared with just over a million daily in October so far.

The spread of the virus across the country's interior has also run parallel with unprecedented outbreaks in rural America.

The rate of infections per capita in the country's most rural counties is now at record levels — close to double what it is in the major metro areas.

In parts of the Midwest and West, hospitals are already scrambling to make room for patients as ICU capacity dwindles in metro areas and in smaller rural communities.

As the pandemic washes over more states, Dr. Bruce Siegel says there will be far less slack in the health care system to move around patients, staff and equipment because every place will be in a similar position.

"If you have just an out-of-control, widespread outbreak, we're not going to have that ability," he says. "We'll just have national shortages of everything and there'll be no ability to backstop here and there — your emergency rooms will be overwhelmed and your ICU will be overwhelmed."

At that point, Siegel says hospitals may have no choice but to turn to "crisis standards of care" — a system of rationing health care resources that favors those who have a higher chance of survival.

The outlook sounds grim, but public health experts say there are steps people and policymakers can take that even now can help flatten the curve of new infections. Mask wearing, social distancing, and targeted policies to limit crowds in public places and indoor settings such as bars and restaurants have been shown to be effective.

"These are simple things. And they may be inconvenient, but they can have just a world of difference," Siegel says. "We still have some weeks where we could change this picture, where we can blunt it."