Accessibility links
Lilly COVID-19 Antibody Treatment Would Come With Hefty Infusion Costs : Shots - Health News The federal government plans to distribute 300,000 doses of the drug at no cost, but that doesn't mean treatment will be free. Intravenous infusion charges can run more than $1,000. 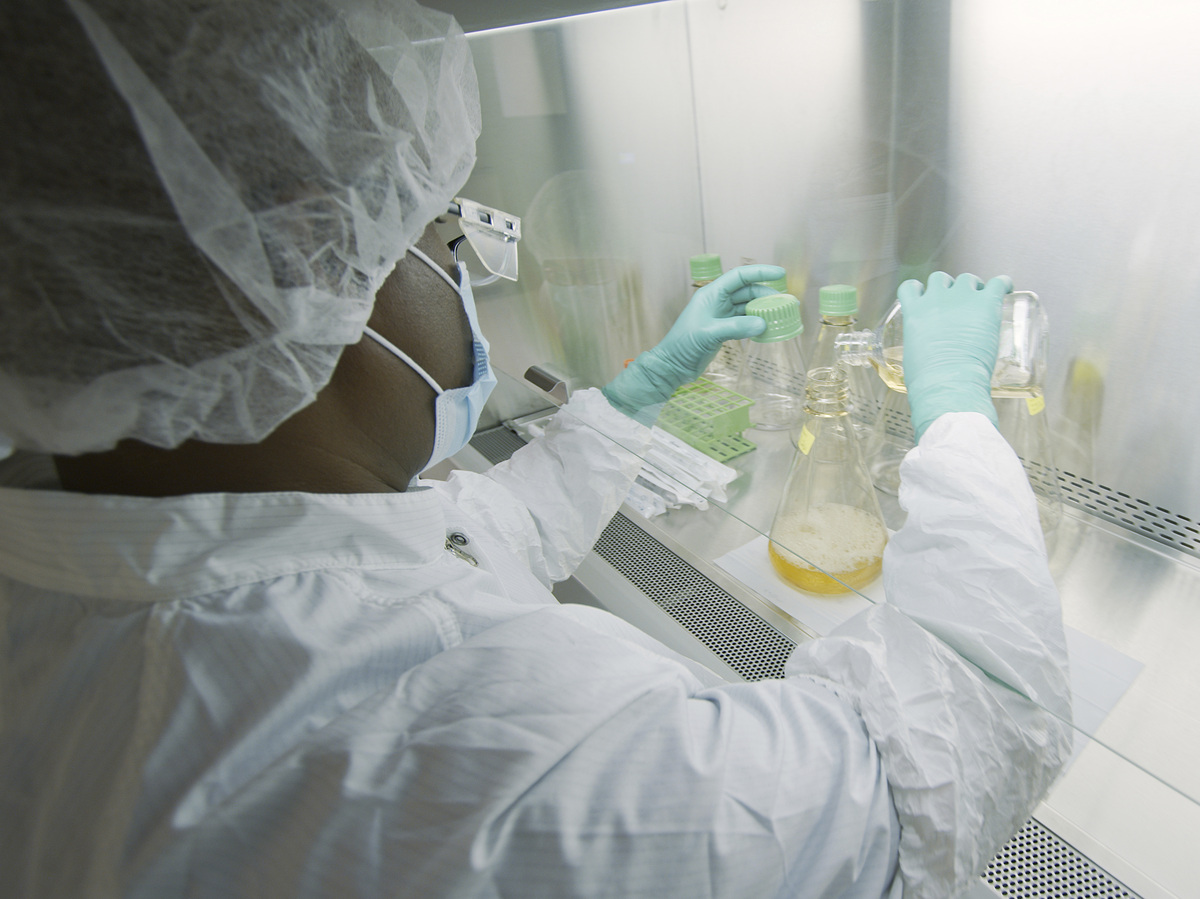 An Eli Lilly researcher tests possible COVID-19 antibodies in a laboratory in Indianapolis.

Eli Lilly has struck a deal with the federal government to provide 300,000 doses of a drug that's designed to keep people infected with COVID-19 out of the hospital. The cost per dose: $1,250.

The federal government plans to distribute the 300,000 doses at no cost, but that doesn't mean treatment will be free.

The Lilly drug, a type of monoclonal antibody, is given by intravenous infusion. Those infusions, typically given in hospitals or standalone clinics, can cost well over $1,000. People with health insurance are often required to pay hundreds of dollars in copayments.

"Our goal is zero out-of-pocket expenses, wherever possible, for any patient receiving a Lilly COVID-19 antibody treatment," said CEO Dave Ricks. However, his statement acknowledged that "health care facilities may charge a fee for the product's administration."

The Food and Drug Administration is considering whether to grant emergency use authorization for this drug, along with a similar product developed by Regeneron. The Lilly deal is contingent on the FDA clearing the medicine for emergency use.

President Trump received the Regeneron treatment shortly after he was diagnosed with COVID-19. He has told Americans they, too, would get it at little or no out-of-pocket cost. However, the federal government has not addressed the issue of infusion costs.

That translates to $125,000 in upfront drug costs to prevent five trips to the emergency room or hospital, or $25,000 a piece. But adding in infusion costs could double the expense.

Since only a small percentage of people who are infected with the coronavirus require hospitalization, taking a drug to reduce that risk would be a judgment call. Is it worthwhile to go to the emergency room for an infusion, and possibly face a substantial copayment, in order to reduce the risk of having to go back to the hospital later with COVID-19?

"A lot of people are already reluctant to get infusions of antibodies," Dr. Scott Gottlieb, former FDA commissioner, said Tuesday on a webcast. Compared with pills, he said, "people inherently look at an infusion as more invasive, as potentially more risky."

Ultimately drug companies hope to make antibodies available as injections rather than infusions, but the first-generation products need to be given in large quantities, so they require infusions.

One decision the FDA will need to make is about the proper dosage. The study reported in the New England Journal of Medicine found that the dose that appeared most effective required 2,800 milligrams of the drug. However, Lilly is arguing that 700 milligrams would be sufficient – in fact, that's the dosage that it has sold to the federal government.

Lilly says it has requested that the drug be made available specifically to those at higher risk – older Americans and people with obesity. Its study in the New England Journal of Medicine shows greater benefit for that at-risk group: 4% of the people in that group ended up in the hospital, compared with 15% of people over 65 or with obesity in the placebo group. However, the study was not designed to look at this subgroup, so this could be a statistical fluke.

That at-risk group still represents a large population. In August alone, the Centers for Disease Control and Prevention reported more than 164,000 cases of coronavirus in Americans over 60. Obesity affects 40% of US adults, so that could translate into another 300,000 people a month potentially eligible for this treatment. So, the 300,000 doses the government has purchased could be used up quickly if demand is high. Lilly hopes to produce up to a million doses by the end of 2020, and intends to make it available worldwide.

Supplies could last longer if the FDA also grants emergency access to the Regeneron antibodies. That product is a combination of two antibodies. The company says its treatment is most effective in people who have been infected but who have not yet developed their own antibodies (those usually appear in the blood about a week after infection). If the FDA restricts the use of that product to people who have tested negative for coronavirus antibodies, the two products could target somewhat different populations.

The federal government announced in July it would purchase up to 300,000 doses of the Regeneron antibodies.

Late Wednesday, Regeneron announced it has submitted more data to the FDA, bolstering its case that the company's monoclonal antibodies reduce the amount of virus in patients.

"These viral reductions are associated with a significant decrease in the need for further medical attention and lessen the need for medical care," Dr. George Yancopoulos, the company's president and CEO, said in a statement.