Accessibility links
Voters Are Motivated To Keep Protections For Preexisting Conditions : Shots - Health News As many as 130 million Americans have a preexisting health condition. Protections for those patients under the Affordable Care Act have become a campaign issue in races up and down the ballot.

4:01
More Than Politics On The Line For Voters With Preexisting Conditions 4:01 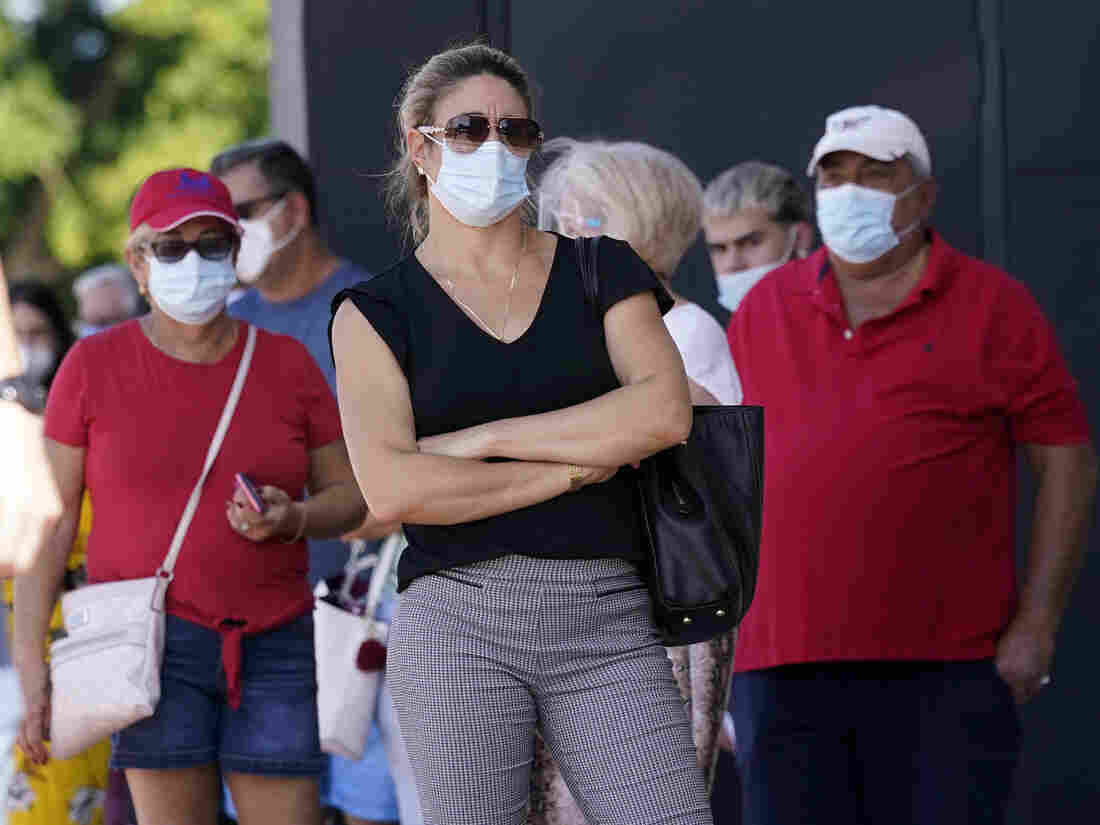 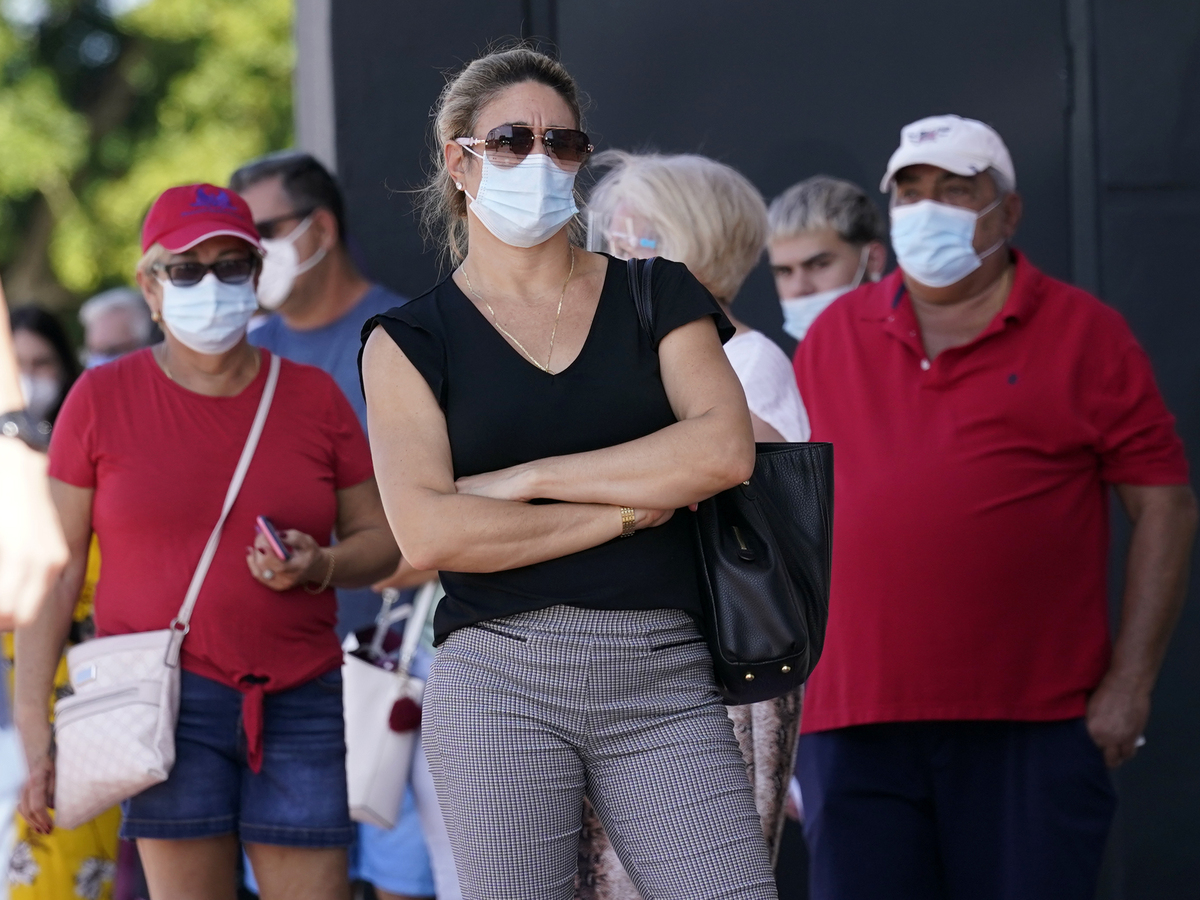 People stand in line for early voting at the John F. Kennedy Library on Oct. 27 in Hialeah, Fla.

In swing states from Georgia to Arizona, the Affordable Care Act — and concerns over protecting preexisting conditions — loom over key races for Congress and the presidency.

"I can't even believe it's in jeopardy," says Noshin Rafieei, a 36-year-old from Phoenix. "The people that are trying to eliminate the protection for individuals such as myself with preexisting conditions, they must not understand what it's like."

In 2016, Rafieei was diagnosed with colon cancer. A year later, her doctor discovered it had spread to her liver.

"I was taking oral chemo, morning and night — just imagine that's your breakfast, essentially, and your dinner," Rafieei says.

In February, she underwent a liver transplant.

Rafieei does have health insurance now through her employer, but she fears whether her medical history could disqualify her from getting care in the future.

"I had to pray that my insurance would approve of my transplant just in the nick of time," she says. "I had that Stage 4 label attached to my name and that has dollar signs. Who wants to invest in someone with Stage 4?"

After doing her research, Rafieei says she intends to vote for Joe Biden, who helped get the ACA passed in this first place.

"Health care for me is just the driving factor," she says.

Even 10 years after the Affordable Care Act locked in a health care protection that Americans now overwhelmingly support — guarantees that insurers cannot deny coverage or charge more based on preexisting medical conditions — voters once again face contradicting campaign promises over which candidate will preserve the law's legacy.

A majority of Democrats, independents and Republicans say they want their new president to preserve the ACA's provision that protects as many as 135 million people from potentially being unable to get health care because of their medical history.

President Trump has pledged to keep this in place, even as his administration heads to the U.S Supreme Court the week after Election Day to argue the entire law should be struck down.

"We'll always protect people with preexisting," Trump said in the most recent debate. "I'd like to terminate Obamacare, come up with a brand new, beautiful health care."

And yet the Trump administration has not unveiled a health care plan or identified any specific components it might include. In 2017, the administration joined with congressional Republicans to dismantle the Affordable Care Act, but none of the GOP-backed replacement plans could summon enough votes. The Republicans' final attempt, a limited "skinny repeal" of parts of the ACA, failed in the Senate because of resistance within their own party.

In an attempt to reassure wary voters, Trump recently signed an executive order that asserts protections for preexisting conditions will stay in place, but legal experts say this has no teeth.

"It's basically a pinky promise, but it doesn't have teeth," says Swapna Reddy, a clinical assistant professor at Arizona State University's College of Health Solutions. "What is the enforceability? The order really doesn't have any effect because it can't regulate the insurance industry."

Since the 2017 repeal and replace efforts, the health care law has continued to gain popularity.

Public approval is now at an all-time high, but polling shows many Republicans still don't view the ACA as synonymous with its most popular provision — protections for preexisting conditions.

Democrats hope to change that.

"If you have a preexisting condition — heart disease, diabetes, breast cancer — they are coming for you," said Biden's running mate, California Sen. Kamala Harris, during her recent debate with Vice President Pence.

Rafieei, the Phoenix woman with colon cancer, still often has problems getting her treatments covered. Her insurance has denied medications that help quell the painful side effects of chemotherapy or complications related to her transplant.

"During those chemo days, I'd think, wow, I'm really sick, and I just got off the phone with my pharmacy and they're denying me something that could possibly help me," she says.

Because of her transplant, she will be on medication for the rest of her life, and sometimes she even has nightmares about being away and running out of it.

"I will have these panic attacks like, 'Where's my medicine? Oh my god, I have to get back to get my medicine?'"

Election season and talk of eliminating the ACA has not given Rafieei much reassurance, though.

"I cannot stomach politics. I am beyond terrified," she says.

And yet she plans to head to the polls — in person — despite having a compromised immune system.

"It might be a long day. But you know what? I want to fix whatever I can," she says.

A few days after she votes, she'll get a coronavirus test and go in for another round of surgery.

Rafieei's home state of Arizona is emblematic of the political contradictions around the health care law.

The Republican-led state reaped the benefits of the ACA. Arizona's uninsured rate dropped considerably since 2010, in part because it expanded Medicaid.

But the state's governor also embraced the Republican effort to repeal and replace the law in 2017, and now Arizona's attorney general is part of the lawsuit that will be heard by the Supreme Court on Nov. 10 that could topple the entire law.

Depending on how the Supreme Court rules, ASU's Reddy says any meaningful replacement for preexisting conditions would involve Congress and the next president.

"At the moment, we have absolutely no national replacement plan," she says.

Meanwhile, some states have passed their own laws to maintain protections for preexisting conditions, in the event the ACA is struck down. But Reddy says those vary considerably from state to state.

"We are in this season of chaos around the Affordable Care Act," says Reddy. "From a consumer perspective, it's really hard to decipher all these details."

As in the congressional midterm election of 2018, Democrats are hammering away at Republican's track record on preexisting conditions and the ACA.

In Arizona, Mark Kelly, the Democratic candidate running for Senate, has run ads and used every opportunity to remind voters of Republican Sen. Martha McSally's votes to repeal the law.

"Can you look down the camera and tell the people of this state why you voted four times to allow insurance companies to deny us health care coverage because we may suffer from diabetes or heart disease or have cancer in remission?" Ossoff said during a debate with his opponent, Republican Sen. David Purdue.

Republicans have often tried to skirt health care as a major issue this election cycle because there isn't the same political advantage to pushing the repeal and replace argument, says Mark Peterson, a professor of public policy, political science and law at UCLA.

"It's political suicide, there doesn't seem to be any real political advantage anymore," says Peterson.

But the timing of the Supreme Court case — exactly a week after election day — has somewhat obscured the issue for voters.

Republicans have chipped away at the health care law by reducing the individual mandate — the provision requiring consumers to purchase insurance — to zero dollars.

The premise of the Supreme Court case is that the ACA no longer qualifies as a tax because of this change in the penalty.

"It is an extraordinary stretch, even among many conservative legal scholars, to say that the entire law is predicated on the existence of an enforced individual mandate," says Peterson.

The court could rule in a very limited way that does not disrupt the entire law or protections for preexisting conditions, he says.

Like many issues this election, Peterson says there is a big disconnect between what voters in the two parties believe is at stake with the ACA.

"Not everybody, particularly Republicans, associates the ACA with protecting preexisting conditions," he says. "But it is pretty striking that overwhelmingly Democrats and Independents do — and a number of Republicans — that's enough to give a significant national supermajority."

This story is part of NPR's health reporting partnership with Kaiser Health News.