Accessibility links
A New President To Bring A New Plan To Combat COVID-19 : Shots - Health News Coronavirus cases are surging around the country. How will Joe Biden manage the pandemic differently, once he takes office in January? Expect a more centralized U.S. response plan, his team says. 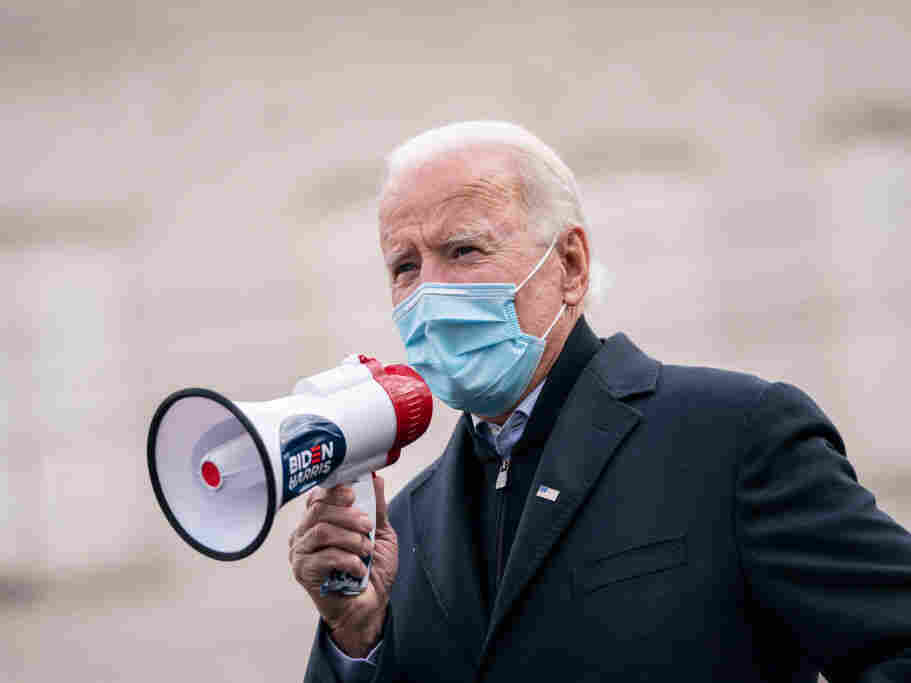 Even before becoming president-elect, Joe Biden has been working on a coordinated, national plan for fighting the coronavirus. Among other things, it will empower scientists at the Centers for Disease Control and Prevention to help set national, evidence-based guidance to stop outbreaks. Drew Angerer/Getty Images hide caption 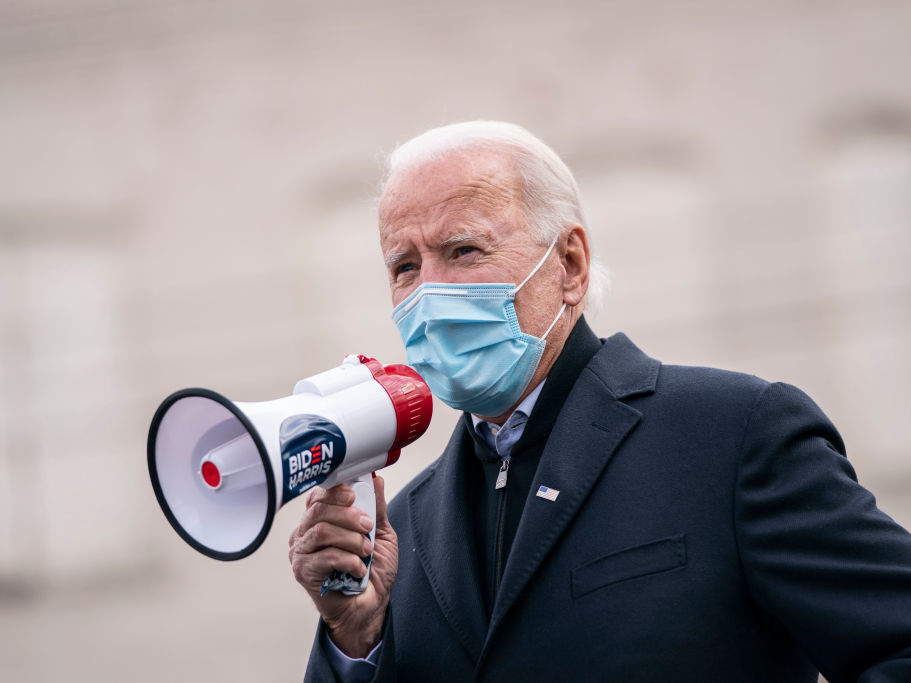 Even before becoming president-elect, Joe Biden has been working on a coordinated, national plan for fighting the coronavirus. Among other things, it will empower scientists at the Centers for Disease Control and Prevention to help set national, evidence-based guidance to stop outbreaks.

As coronavirus cases surge around the country, President-elect Joe Biden says voters have given him a mandate to take action.

"Daily cases are skyrocketing," Biden said in remarks Friday evening in Wilmington, Del., as the nation waited for the election to be called. "I want everyone — everyone — to know on Day 1, we're going to put our plan to control this virus into action."

Many of the voters who helped propel Biden toward the presidency ranked the pandemic as the most important issue facing the United States, according to AP VoteCast data.

So how will Biden deliver on their hopes?

Specifically, Biden's plan calls for empowering scientists at the Centers for Disease Control and Prevention to help set national, evidence-based guidance to stop outbreaks as well as making significant investments in vaccine distribution, testing and the creation of a public health workforce to carry out contact tracing and other services.

"We have to function as one nation. That means having a national plan," Murthy, a key adviser to the Biden campaign, told NPR recently.

Murthy said Biden will focus on helping Americans get what they need to keep themselves and their families safe. "What you're going to see is a laser focus on ensuring that people get ... adequate testing and clear information," he said.

Murthy said a Biden administration will have a unified message and strategy on how to proceed. "Rebuilding public trust is about communication. It's about following the science," he added.

Ezekiel Emanuel, a physician and University of Pennsylvania professor who has briefed Biden on health policy, told NPR he got to see how Biden works during the Obama administration's economic recovery efforts in 2009, which Biden managed as vice president. "You're going to have rigorous evaluation and constant refinement" of policies and strategies, he said.

While working on the Recovery Act, Emanuel said, Biden "was constantly asking, 'Are we doing the right thing?' " and looking to adjust midcourse, if necessary. "He's a very practical guy," Emanuel said.

Here's a summary of Biden's proposals:

This report is drawn from a more extended analysis of the Biden pandemic plan published on Oct. 28.

Under Biden's plan, the CDC will be directed to provide specific guidance — based on the degree of viral spread in a community — for "how to open schools, open businesses," Emanuel says, or when to impose restrictions on gathering sizes or when stay-at-home orders may be called for.

It would create a national "pandemic dashboard" to share this information with the public. This is a strategy recommended by a top group of public health experts, who released a framework for assessing community risk.

And Biden says he'd work with every governor to make mask-wearing in public mandatory in their state. Many states already have mask mandates, but though research suggests that universal masking could save more than 100,000 lives, there's currently no nationwide coordination or requirement.

The Biden campaign has said the goal is to "ensure that all Americans have access to regular, reliable and free testing." His administration will work to double the number of drive-through testing sites and invest in "next-generation testing," including home tests and instant tests.

"It's not enough to know in seven days or five days or three days whether or not you have COVID," Biden recently said on CBS' 60 Minutes. If there's a long lag time, a person may spread the disease unwittingly while waiting for results.

There are currently several home test kits that give quick results without being sent to a laboratory in development, but none are yet approved by the Food and Drug Administration. While there has been a significant expansion in testing, "testing is still not available and affordable to all people across the country," Murthy told NPR.

The Biden team pledges to "mobilize" 100,000 Americans to work with local organizations around the country to perform contact tracing and other health services for populations at high risk for COVID-19.

The idea is to empower local communities and health departments to assist people with challenges such as food insecurity and affordable housing.

"Imagine a public health workforce that was also helping train school officials in how to reopen safely," Murthy told NPR. Or helping run public education campaigns about a vaccine and how to stay safe in the pandemic. "Think about a workforce that was diverse, that looked like the country that we're trying to serve," Murthy said.

Millions of American have lost health insurance during the pandemic. Biden's coronavirus plan proposes to have the federal government cover 100% of the costs of COBRA coverage for the duration of the crisis. "So when people lose their employer-based health insurance, they can stay on that insurance, given the moment we are in," Stef Feldman, Biden's national policy director, told NPR.

In addition, Biden will push to strengthen the Affordable Care Act, expanding coverage by making more people eligible for premium subsidies. Biden hopes also to push for expansion of Medicaid in states that have yet to do so, and he has proposed making Medicare coverage available to Americans beginning at age 60 (instead of 65).

During the pandemic, several governors asked the Trump administration to reopen the federal Obamacare marketplace for a special enrollment period. Feldman has told NPR that Biden would do so immediately after his inauguration to allow those who've lost insurance to sign up for new plans. She called it "a basic step that President Trump has refused to do."

During the pandemic, Biden says many families are struggling to find affordable care for their children, aging relatives or loved ones with disabilities. "At the same time, professional caregivers have either lost their jobs or continue to work while putting their lives at risk without sufficient pay," his campaign plan noted.

Biden plans to work with states to speed up waiting lists for Medicaid-paid care in homes. In addition, the president-elect supports a variety of steps to expand caregiving, including ensuring access to preschool for 3- and 4-year-olds and supporting caregivers through job training and improved benefits and protections.

States will need a lot of money to distribute a vaccine and make sure it gets to everyone who wants it. There are complex logistics that will require planning and resources. Currently state governors are asking for more guidance and financial assistance.

The Biden team proposes investing $25 billion in a vaccine manufacturing and distribution plan "that will guarantee it gets to every American, cost-free."

The president-elect also wants to solve the shortages of personal protective equipment that have plagued the U.S. health care system since the pandemic began. The Biden team says after the inauguration, it will work to make sure more of these critical supplies are produced and distributed "rather than leave states, cities, tribes, and territories to fend for themselves."

Biden says he'd use the Defense Production Act to increase production of masks, face shields and other personal protective equipment so that supply exceeds demand.

An earlier version of this story said the advisory board will have 12 members. It will have 13.