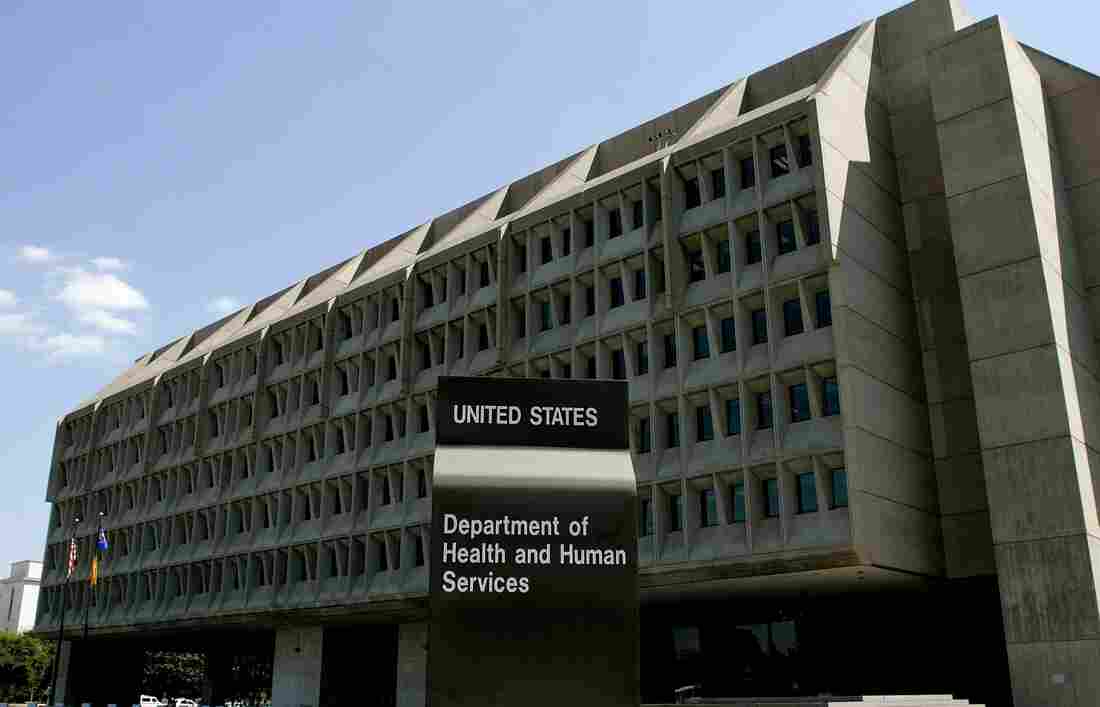 The Department of Health and Human Services on Saturday made public several contracts with companies working on COVID-19 vaccines as part of Operation Warp Speed. Mark Wilson/Getty Images hide caption

While the country was focused on the outcome of the election Saturday, the Department of Health and Human Services released a trove of new Operation Warp Speed documents.

The newly released contracts include the crash program's $1 billion agreement with Johnson & Johnson, which was issued through a third-party firm and lacks some customary protections against potential future price-gouging.

Operation Warp Speed, the Trump administration's expensive push to make a coronavirus vaccine widely available in record time, has been slow to reveal details of its deals with vaccine manufacturers worth billions of dollars. Those that have emerged, reveal weakened taxpayer protections.

"HHS' drip drip release strategy fails to meet the needs of the moment," says Zain Rizvi, a law and policy researcher at Public Citizen focused on pharmaceuticals. "Taxpayers have handed over billions of dollars in the dark."

An HHS spokesman issued the following statement to NPR:

The newly released contracts were issued through a third party, Advanced Technology International, a fact NPR brought to light in September. This arrangement concerned members of Congress and advocacy groups who feared the nontraditional agreements would omit taxpayer protections that allow the government to "march in" if the manufacturer receiving federal funding fails to make its product or sets an unreasonable price.

They also feared the contracts to vaccine manufacturers wouldn't be subject to public records requests because they were issued by a third party, and the agency had so far not released them. At least two nonprofits, including Public Citizen, have sued after their requests for the documents went unanswered for months.

Johnson & Johnson's Aug. 5 contract for the government's purchase of 100 million doses of its coronavirus vaccine doesn't include the march-in rights that are typical planks in contracts for federally funded inventions. Instead, the contract allows a much narrower window for the government to step in, excluding when COVID-19 stops being a public health emergency and becomes endemic, as is expected.

"We all want a safe and effective vaccine as quickly as possible," says attorney Kathryn Ardizzone of Knowledge Ecology International, a nonprofit public interest group focused on intellectual property. "To get that, the government doesn't have to compromise access and affordability."

But that's what it seems to be doing, she says. The data rights in the contract, which typically govern disclosure and sharing of key studies, cell lines and the know-how for making a product, are especially weak. In the Johnson & Johnson contract, "data" explicitly excludes "production/manufacturing know-how, trade secrets, clinical data."

"That is a big issue limiting the government's ability to enable another qualified company to manufacture the vaccine if there are shortages," Ardizzone says.

This is the second contract issued through a third party to be made public. Regeneron released its contract with Advanced Technology International on Nov. 5, revealing similar terms. HHS hasn't yet released the Regeneron contract.

Advanced Technology International uses a nontraditional contracting mechanism known as an "other transaction agreement" to facilitate government work with several groups of academics and companies. On Saturday, HHS released the government's base agreement with the consortium it manages that has been doing work for Operation Warp Speed. It's called the Medical CBRN Defense Consortium, which is tasked with developing medical countermeasures to threats against the military.

The base agreement dates back to April 2016, and has been modified for new projects over the years. To add Operation Warp Speed, the government modified the agreement, adding more money and contract terms.

The agency first posted the Moderna contract on Oct. 25. However, that version of the document was heavily redacted to protect trade secrets. But the redactions included information that had previously been made public, such as the contract's value.

Moderna released its own version of the contract on Oct. 30 in a quarterly financial filing, revealing much of the information the federal government concealed. HHS took its redacted document down for about a day before replacing it with the more transparent version.

"The fact that pharmaceutical corporations continue to provide more details about the deals to investors than HHS provides to the public is unacceptable," Rizvi says.

NPR is still working to obtain the remaining contracts.