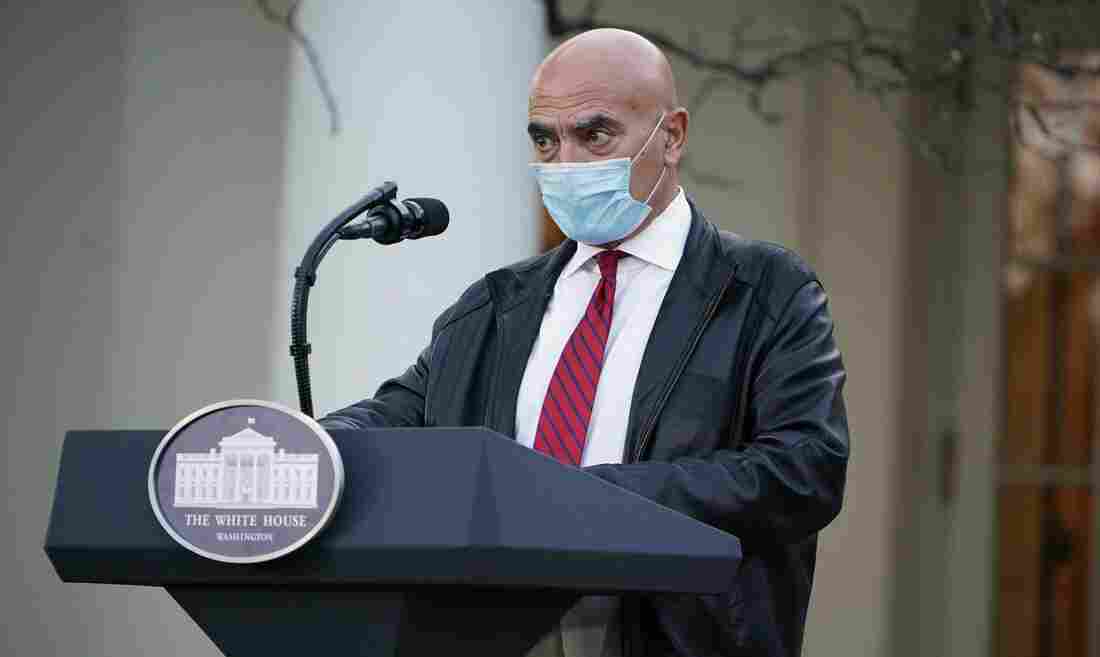 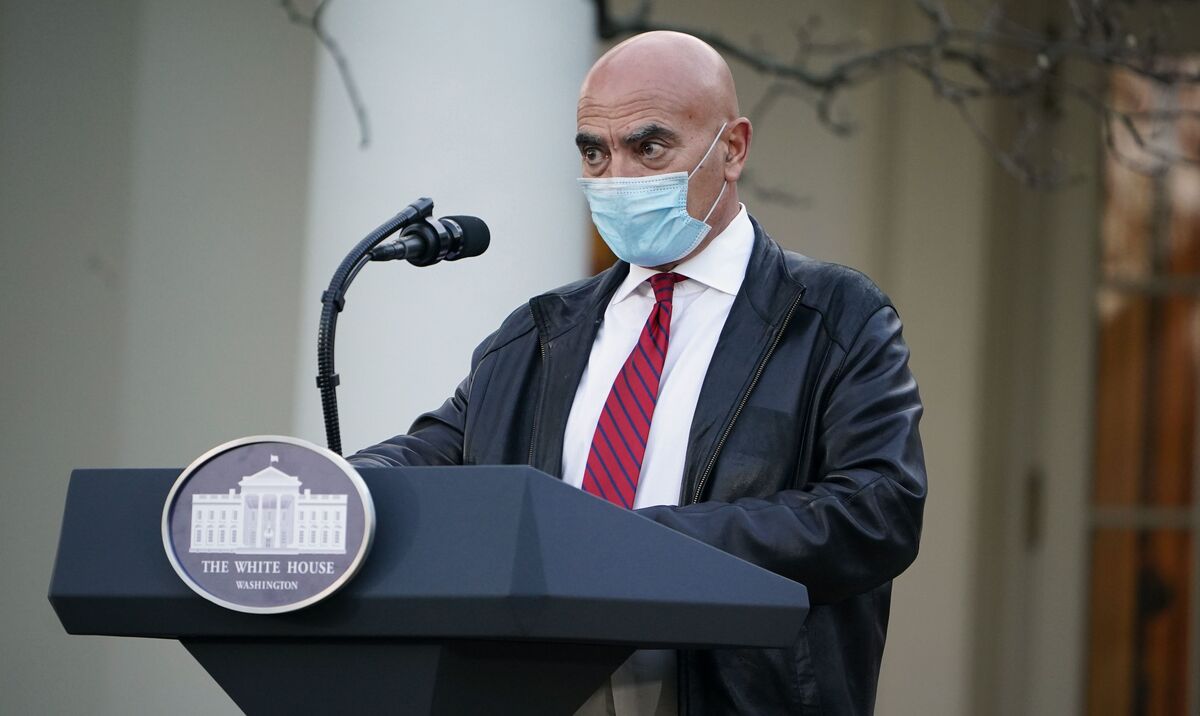 The American biotech company Moderna announced Monday that its experimental COVID-19 vaccine is 94.5% effective in preventing illness following exposure to the virus that causes the disease.

The announcement comes exactly a week after the companies Pfizer and BioNTech revealed their vaccine is more than 90% effective, meaning two independently developed vaccines are getting closer to distribution. In the coming weeks, both companies are expected to ask the FDA to authorize their vaccines for emergency use and they hope to start distributing the first doses by the end of the year.

Dr. Moncef Slaoui, chief scientific adviser for Operation Warp Speed and former Moderna board member, says he's "ecstatic" about the news. He says the announcement exceeded his expectations for efficacy and will be key to ending the pandemic.

"If enough of us get vaccinated, there is a good chance that we keep this virus at very, very low levels, which means we can go back to normal life — fully normal life," Slaoui says.

What is your reaction to today's news, 94.5% effective in preventing COVID, sounds pretty great?

Well, frankly, I would say ecstatic. And what's really great is that the data are highly similar to those that Pfizer announced last week. These are two vaccines that are totally independently developed. They are using similar technology and independently tested in large phase three trials. And to come with such similar data, I think gives great confidence that this data is real, that these vaccines are highly, highly effective and efficacious, and their safety profile is the best that we have been able to see up to now — very satisfactory.

You said you were ecstatic. It also sounds like you're a little surprised that these numbers have come in quite so good?

I was expecting the vaccines to be 80 to 90 percent efficacious. And I remember that many people questioned that. I'm glad they are 90 percent or 95 percent efficacious. This is what the world needs to control this pandemic. And it also means, and suggests, that the other vaccines that we have in our portfolio — and vaccines that others are working on — are very likely to be very effective. This is apparently a virus that is particularly susceptible to a good immune response, and that's good news for the world.

Lay out briefly for us what you see as the key differences between these vaccines. One that immediately leaps out is the Moderna vaccine has to be kept cold, but not nearly as cold as the Pfizer one, which might make it a little easier to distribute.

Yes, I would say the biggest difference here is indeed around the cold chain. The Pfizer vaccine requires a minus 80 degrees Celsius temperature for its storage. On the other hand, the Moderna vaccine also requires significant cold, but not as cold — minus 20 Celsius — which is more common. Most of the freezers that people have in their homes are minus 20. And the Moderna vaccine can actually be stable and capped at 2 to 8 degrees [Celsius], which is a fridge temperature, for up to a month. That is really a big plus in terms of being able to immunize individuals, for instance, that come to CVS or Walgreens and ask to be immunized.

We should stress these are preliminary results — more trials are going to be needed and they haven't been peer reviewed in scientific journals. But, the people who took the Moderna vaccine and did get sick, didn't get that sick. They did not have severe cases of COVID-19. Does that suggest to you that even if it can't keep everyone from getting sick, that it might reduce the severity of illness?

That is very important and very exciting. And, frankly, it's not uncommon with vaccines. You know, there have been 11 cases of severe disease in the trial and all of them were in the placebo group, not in the vaccine group, suggesting that this vaccine is highly effective against severe disease, and also highly effective against any disease, whether it's mild or moderate.

So that's excellent news. We expect to see more of such information on the Pfizer vaccine. We haven't seen it yet. I can tell you, because we have much closer collaboration with the Moderna program, there are also many cases in individuals over the age of 65 — and again, efficacy is excellent there. Likewise, there are people from diverse ethnic origins — Latinos, African Americans, Asians — across the line, the same trend on efficacy, without statistical power because there is a smaller number there. I expect the Pfizer vaccine to have the same performance, or very similar, so it's very good news in the sense that the vaccine works very well in everyone.

So what are the challenges now? Is the chief one just getting enough doses?

Well, first of all, we need to help the companies to prepare the files, [both companies are expected to file with the FDA for emergency use authorization] and support them in going to the FDA reviews. The CDC and the ACIP will make recommendations if the FDA approves the vaccines. And while all of this is ongoing over the next probably three or four weeks, we will continue what we've been doing since the month of May, which is working with the companies to help with the manufacturing and the release of the vaccine doses.

We have announced that we would be able to have enough doses to immunize about 20 million people by the month of December. That means the 40 million doses between the two vaccines, and about 25 million people on an ongoing basis from there on, in January and beyond. But then what's important to keep in mind is we have four more vaccines in the pipeline — in our portfolio — two of which are in the middle of their phase three trials with already about 10,000 subjects recruited in each one of their trials.

The Johnson & Johnson vaccine is a one shot vaccine, which is a lot easier to deliver. People don't have to come back after a month or three weeks for a second dose. And that vaccine may very well read out in January and may be approved in February. And doses are being manufactured as we speak. Likewise with the AstraZeneca vaccine — that's a two shot vaccine."

What is the value of pushing full speed ahead on all these vaccines when you've got two that look extremely promising, and understanding that resources are finite?

Well, one [element] was to manage the risk of failure. The second, which was built in from day one, was to use different platform technologies because they may have different performance, which makes them best suited for different subpopulations. You know, a frail elderly person's immune system is very different from a young 18-year-old football player. And a 55-year-old first line worker is different from a pediatric toddler or a 3-months-old baby.

So the various platform technologies are going to give us the opportunity to select from a menu of vaccines with different performance, the best vaccines suited for a given population. I think that's an important element. And then the third element is, this is one way to have more vaccine doses.

Once you scale them up, you produce many more millions of vaccine doses per batch.

As a person in charge of science, what do you say to people who are worried about vaccine safety — who say 'make all the vaccines you want, I'm not going to take it'?

I have a plea, which is please just listen and open up your mind to hear the transparent data and information — and then make up your mind. But it's really very important not to have a predefined position.

It is unfortunate that there was so much politics that has, I think, exacerbated certain reservations that, hopefully now, people can just take more time to rationally decide. Now, people need to realize there's only one way to protect yourself and also protect people around you (on top of, of course, wearing your mask and washing your hands and keeping your distance) and it's vaccination. And if enough of us gets vaccinated, there is a good chance that we keep this virus at very, very low levels, which means we can go back to normal life — fully normal life.

When I last spoke to you, Dr. Slaoui, you told me you're looking at the middle of 2021 for a vaccine that is safe, effective and widely available. Does that timeline hold or does this news of the last week bump things up any?

I think my statement has always been that by the middle of 2021, we would be able to have vaccinated the U.S. population — and I think that statement remains. I think in a worst case scenario, if we only have these two vaccines that work, we may not be able to have produced 600 million doses between now and June, so it may extend by a quarter or so. But all in all, I think I feel more comfortable now saying the vaccines are possible, vaccination is possible — and not only is it possible, can be incredibly effective, and that's great news. So it gives me great optimism that we can see the light at the end of the tunnel.