Accessibility links
As Rural COVID Patients Are Moved To Nearby Cities, Hospitals Struggle To Cope : Shots - Health News In Kansas City, hospitals are treating local COVID-19 patients as well as patients transferred from rural counties in Missouri and Kansas, where there's no mandate or culture for wearing masks. 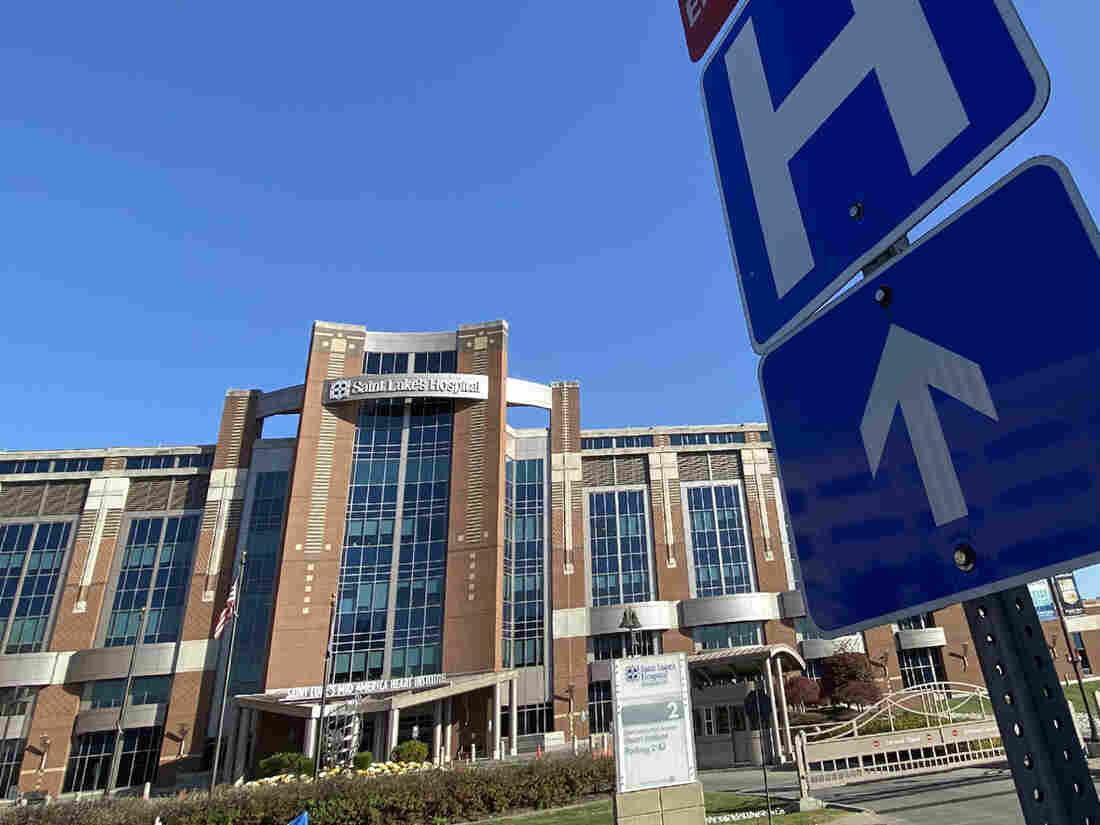 Saint Luke's Hospital of Kansas City is one of the 18 hospitals in the Saint Luke's Health System. Two-thirds of the COVID-19 patients transferred to Saint Luke's from rural areas need intensive care. "We get the sickest of the sick," says Dr. Marc Larsen. Carlos Moreno/KCUR hide caption 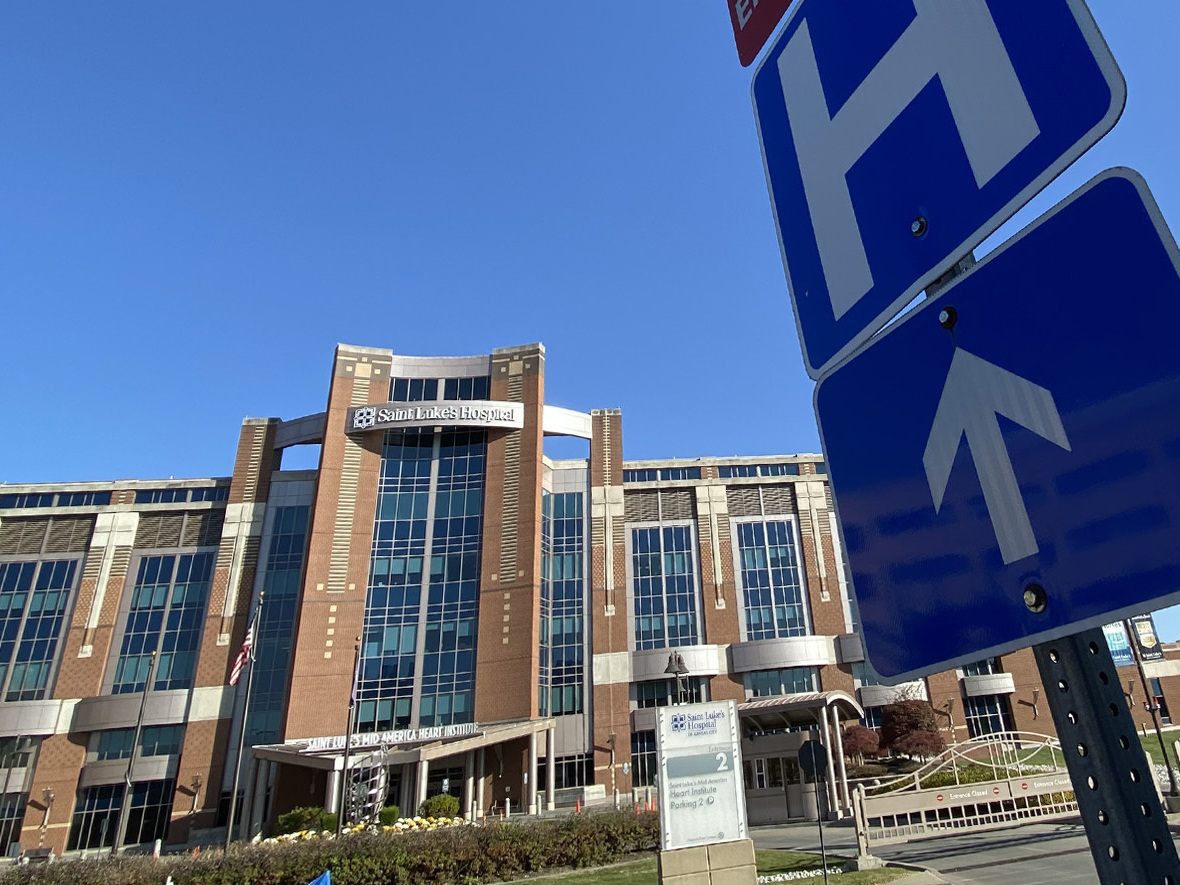 Saint Luke's Hospital of Kansas City is one of the 18 hospitals in the Saint Luke's Health System. Two-thirds of the COVID-19 patients transferred to Saint Luke's from rural areas need intensive care. "We get the sickest of the sick," says Dr. Marc Larsen.

But when she returns home to her small town of Spring Hill, Kansas, she's often stunned by what she sees, like on a recent stop for carryout.

"No one in the entire restaurant was wearing a mask," Muhindura says. "And there's no social distancing. I had to get out, 'cause I almost had a panic attack. I was like 'What is going on with people? Why are we still doing this?'"

Many rural communities across the U.S. have resisted masks and calls for social distancing during the coronavirus pandemic, but now rural counties are experiencing record-high infection and death rates

Critically ill rural patients are often sent to city hospitals for high-level treatment, and as their numbers grow, some urban hospitals are buckling under the added strain.

Kansas City has a mask mandate, but in many smaller communities nearby, masks aren't required — or masking orders are routinely ignored. In the last few months, rural counties in both Kansas and Missouri have seen some of the highest rates of COVID-19 in the country.

At the same time, about three out of four counties in Kansas and Missouri don't have a single intensive care unit bed, so when people from these places get critically ill, they're sent to city hospitals.

A recent patient count at St. Luke's Health System in Kansas City showed a quarter of COVID-19 patients had come from outside of the metro.

Two-thirds of the patients coming from rural areas need intensive care and stay in the hospital for an average of two weeks, says Dr. Marc Larsen, who leads COVID-19 treatment at St. Luke's.

"Not only are we seeing an uptick in those patients in our hospital from the rural community, they are sicker when we get them because [doctors in smaller communities] are able to handle the less sick patients, and we get the sickest of the sick," says Larsen.

Dr. Rex Archer, head of Kansas City's health department, warns that capacity at the city's 33 hospitals is being put at risk by the influx of rural patients.

"We've had this huge swing that's occurred because they're not wearing masks, and yes, that's putting pressure on our hospitals, which is unfair to our residents — to our residents that might be denied an ICU bed," Archer says.

A study newly released by the Centers For Disease Control and Prevention showed that Kansas counties that had mandated masks in early July had decreases in new COVID-19 cases, while counties without mask mandates had increases.

Hospital leaders have continued to plead with Missouri's Republican Governor Mike Parson, and with Kansas's conservative legislature, to implement stringent, statewide mask requirements but without success.

Parson won the Missouri gubernatorial election on Nov. 3 by nearly 17 points. Two days later at a COVID-19 briefing, he accused critics of "making the mask a political issue." He says county leaders should decide whether to close businesses or mandate masks.

"We're going to encourage them to take some sort of action," he said Thursday. "The holidays are coming and I as governor of the state of Missouri am not going to mandate who goes in your front door."

In an email, Dave Dillon with the Missouri Hospital Association agreed that rural patients might be contributing to hospital crowding in cities, but argued the strain on hospitals is a statewide problem.

The reasons for the rural COVID-19 crisis involve far more than the refusal to mandate or wear masks, according to health care experts.

Both Kansas and Missouri have seen rural hospitals close for year after year, and public health spending in both states, as in many largely rural states, is far below national averages.

Rural populations also tend to be older and to suffer from higher rates of chronic health conditions, including heart disease, obesity and diabetes. Those conditions can make them more susceptible to severe illness when they contract COVID-19.

Rural areas have been grappling with health problems for a long time, but the coronavirus has been a sort of tipping point, and those rural health issues are now spilling over into cities, explains Shannon Monnat, a rural health researcher at Syracuse University.

"It's not just the rural health care infrastructure that becomes overwhelmed when there aren't enough hospital beds, it's also the surrounding neighborhoods, the suburbs, the urban hospital infrastructure starts to become overwhelmed as well," Monnat says.

Unlike many parts of the U.S., where COVID trendlines have risen and fallen over the course of the year, Kansas, Missouri and several other Midwestern states never significantly bent their statewide curve.

Individual cities, such as Kansas City and St. Louis, have managed to slow cases, but the continual emergence of rural hotspots across Missouri has driven a slow and steady increase in overall new case numbers — and put unrelenting strain on the states' hospital systems.

The months of slow but continuous growth in cases created a high baseline of cases as autumn began, which then set the stage for the sudden escalation of numbers in the recent surge.

"It's sort of the nature of epidemics that things often look like they're relatively under control, and then very quickly ramp up to seem that they are out of hand," says Justin Lessler, an epidemiologist at Johns Hopkins Bloomberg School of Public Health.

Now, a recent local case spike in the Kansas City metro area is adding to the statewide surge in Missouri, with an average of 190 COVID patients per day being admitted to the metro region's hospitals. The number of people hospitalized throughout Missouri increased by more than 50% in the last two weeks.

Some Kansas City hospitals have had to divert patients for periods of time, and some are now delaying elective procedures, according to University of Kansas Hospital chief medical officer Dr. Steven Stites.

But bed space isn't the only hospital resource that's running out. Half of the hospitals in the Kansas City area are now reporting "critical" staffing shortages. Pascaline Muhindura, the nurse who works in Kansas City, says that hospital workers are struggling with anxiety and depression.

"The hospitals are not fine, because people taking care of patients are on the brink," Muhindura says. "We are tired."