Accessibility links
As Hospitals Strain Under Influx Of COVID-19 Patients, Deaths Are Climbing : Shots - Health News Hospitals are getting so crowded with COVID-19 patients that they're having to resort to workarounds to treat them all. Experts warn this may hamper doctors' ability to save lives.

Near Crisis, Some Hospitals Face Tough Decisions In Caring For Floods Of Patients

Near Crisis, Some Hospitals Face Tough Decisions In Caring For Floods Of Patients 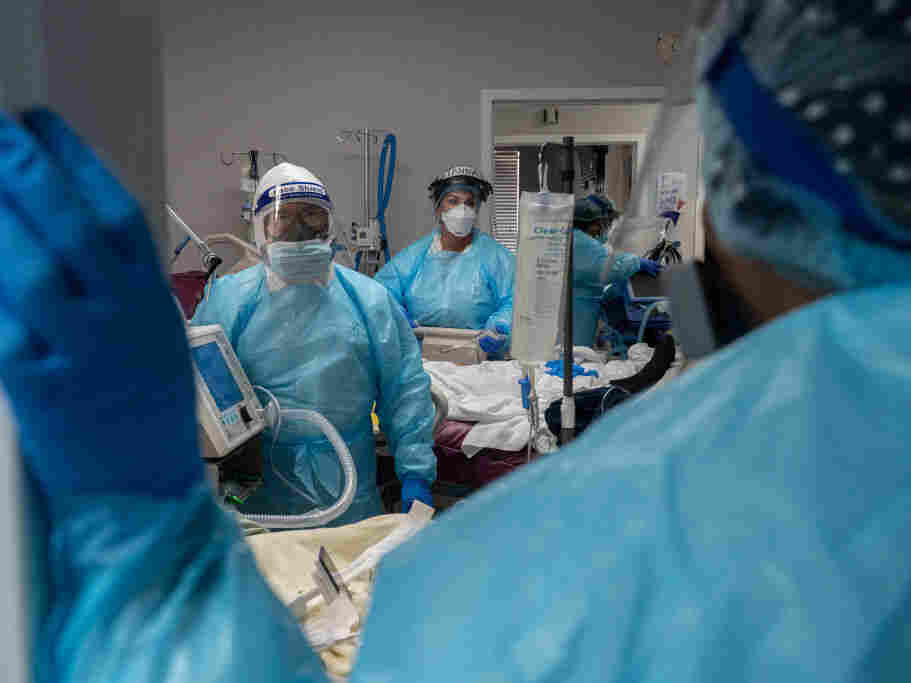 Medical staff prepare for an intubation procedure on a COVID-19 patient in a Houston intensive care unit. In some parts of the U.S., as hospitals get crowded, hospital leaders are worried they may need to implement crisis standards of care. Go Nakamura/Getty Images hide caption 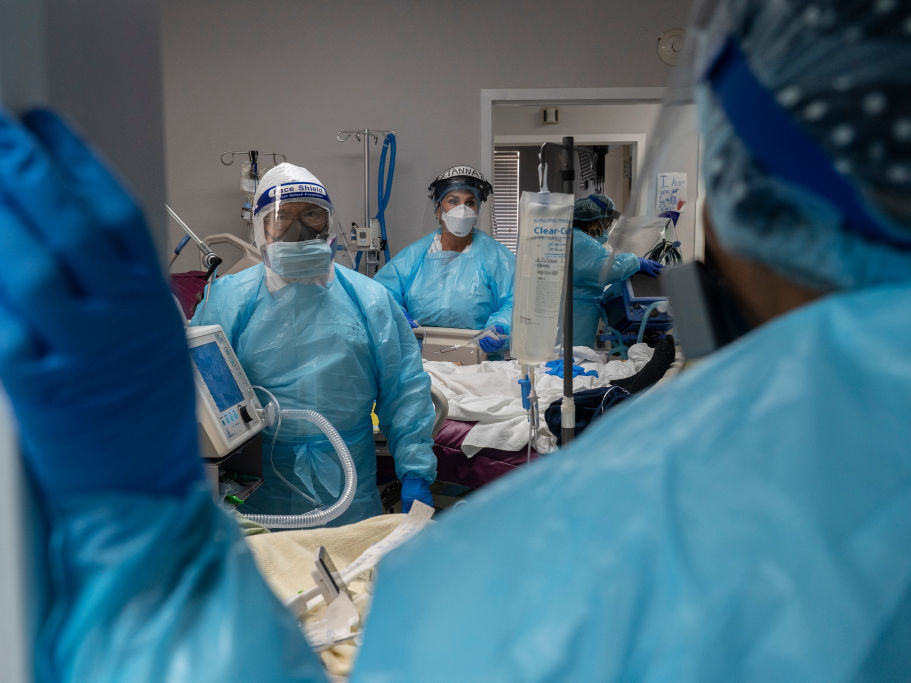 Medical staff prepare for an intubation procedure on a COVID-19 patient in a Houston intensive care unit. In some parts of the U.S., as hospitals get crowded, hospital leaders are worried they may need to implement crisis standards of care.

Far more people in the U.S. are hospitalized for COVID-19 now than at any other moment of the coronavirus pandemic — more than twice as many as just a month ago.

Hospitals in some of the hardest-hit states are exhausting every health care worker, hospital room and piece of equipment to evade the worst-case scenario, when crisis plans have to be set in motion and care may have to be rationed.

Many states are warning they're on the brink. On the ground, equipment and staff shortages are already straining the system and changing how hospitals provide care. An NPR data analysis supports what health care leaders and researchers have cautioned: This stress may even be contributing to higher death rates.

"We accept a small amount of risk each time that we expand our capacities," says Dr. John Hick, a committee member of the Forum on Medical and Public Health Preparedness for Disasters and Emergencies of the National Academies of Sciences, Engineering, and Medicine. "It's not at all unexpected that we're going to have some worse outcomes."

The care crisis is already here

Hospitals have a road map for how to manage during a catastrophe. It's called crisis standards of care, and it guides clinical and ethical decisions on how to triage care when resources are tight.

It's a last resort — a fundamental change from doing everything possible for one patient to maximizing the benefits for many, says Dr. Dan Hanfling, who served on the crisis standards of care committee for NASEM with Hick.

And while most places have not officially activated crisis standards of care, hospitals are already resorting to workarounds to "maximize, to the closest extent possible, the usual standards of care," says Hanfling.

Hospital capacity expands like an "accordion," but at some point, he says, "you overwhelm even those capabilities. And you get to the point where space, staff and stuff are really not being consistent with the level of care that we are used to delivering."

"There's been a lot of language around 'we're right on the edge of entering crisis capacity,' but what I'm worried about is that there's kind of a blurred entry," says Dr. Kate Butler, a nephrologist and acting instructor at the University of Washington School of Medicine.

Butler has studied how health care workers dealt with these clinical dilemmas during the spring COVID-19 surge.

"Everybody gets a little bit of bad care," said one worker she interviewed, referencing shorter dialysis sessions for patients when the machines were in high demand.

In an interview with NPR, Butler said, "there's been far less preparation for this gray zone where resources are limited, and we're seeing impact on patient care — potentially people dying — because they're not getting the care that would otherwise be offered to them."

During the current surge, hospitals are again grappling with tricky decisions around how far you can stretch care.

In Wisconsin, where the state has set up makeshift beds at the Wisconsin State Fair Park to handle mild COVID-19 cases, the Mayo Clinic Health System has moved beds into waiting rooms and even a parking garage.

"Literally every bed in northwest Wisconsin was full, and hospitals just weren't able to admit new patients," said Dr. Paul Horvath as he described a recent shift at the emergency room to Wisconsin Public Radio. "And that means that I had the challenge of managing ICU-level care in my ER for hours, which is obviously not routine."

Since the beginning of the pandemic, COVID-19 death rates have fallen for patients who get hospitalized, thanks in part to improvements in treatment. But in places where hospitalizations have been rising rapidly, deaths rose even faster, suggesting a concerning correlation between hospital crowding and deaths.

These death rates — measured as the ratio of average daily deaths to hospitalizations in a state — are going up in places like South Dakota, Wisconsin and Montana. Last week, for example, South Dakota had 4.4 deaths for every 100 patients hospitalized each day. The U.S. overall had fewer than two deaths per 100 hospitalizations each day.

Without detailed data on hospitalizations, which are not made public by the federal government, it's difficult to tell if this trend is driven by hospital capacity issues or other factors like the age and severity of patients. But researchers and public health experts worry that overcrowding in hospitals is, at the very least, a contributing factor.

"It's definitely something we need to pay more attention to," says Dr. Bilal Mateen, a data science fellow at the Alan Turing Institute in the United Kingdom. He used detailed government data there to study the COVID-19 death rate. His findings from London echo the experience in New York City: The highest death rates came during the beginning of the pandemic when hospitals were full.

Mateen says even though there's not enough research yet to definitively prove that crowded hospitals lead to higher death rates, it would be better to assume so and act aggressively now to stop the surge in hospitalizations.

"Why on earth if [doctors] are telling you that they're at their wits' end of what they are capable of, why would you not do the sensible thing and recognize the health system is at a breaking point?"

Separate research published in the Journal of General Internal Medicine in August found that when more beds were occupied by COVID-19 patients, the number of deaths rose over the next week, though it did not examine whether a higher percentage of patients died as hospitals filled up. Pinar Karaca-Mandic, a professor at the University of Minnesota and the lead author of that study, told NPR that the most recent data available show roughly the same trend.

Care on the brink of crisis

Around the country, the surge has upended how some hospitals typically provide care, and health care workers are making tough on-the-ground decisions.

In the spring, physicians expected that a shortage of ventilators would force them to call on crisis standards of care, but now hospitals overwhelmingly say the limiting factor is turning out to be skilled staff who can care for severely ill patients — not machines or beds.

How many ICU patients can a single nurse handle? When is it OK to discharge patients early to free up space? Who gets moved to a field hospital with fewer staff members?

"I don't really see these choices as being black and white, you're going to get care or you're not," says Hick, who's also an emergency physician with Hennepin Health in Minnesota.

Utah is warning it's perilously close to implementing its statewide crisis plan. The state is moving COVID-19 patients who are not quite as sick to designated COVID-19 nursing facilities to free up hospital space, says Kevin McCulley, director of preparedness and response for the Utah Department of Health.

"We recognize that even with deeper and deeper contingency strategies, that it may not be enough," he says.

The Utah-based hospital chain Intermountain Healthcare has deployed nurses who aren't usually at the bedside, has adjusted staffing ratios when necessary and has brought in nursing students who are almost done with school to help, all in hopes of avoiding crisis standards of care, says Jim Sheets, its chief operating officer.

"That's our biggest goal, is to avoid that at all, at all costs," says Sheets. "This week, our ICU and our hospitals were over 90%, and that's really full, that can be problematic, but we've been able to be stabilized there for a couple weeks."

At St. Luke's Health System in Idaho, hundreds of COVID-19 patients are being sent home with blood pressure cuffs, pulse oximeters and iPads so their vitals can be monitored remotely in case their conditions deteriorate. The hospital has also set up ICU doctors to look after multiple patients via telehealth so their expertise can go as far as possible.

"We're going to run out of staff to take care of people. They're just going to be overwhelmed, and people can only do so much," Cavagnol says. "At some point, we will reach that capacity, but we're not there today."

In Illinois, Chicago nurse Consuelo Vargas says critically ill patients are being held in her emergency room for up to several days.

Under the rapidly growing pressure of COVID-19 patients, hospitals are running out of alternative strategies to make room for patients without somehow compromising care.

The goal of crisis plans is to prevent clinicians from making tough ethical decisions about patient care on their own.

Yet in a report published Tuesday, a group of New York City ICU physicians said it was unclear to them whether their hospitals were formally operating in crisis standards of care or not during the spring surge.

"Many participants felt strongly that the dividing line between being extraordinarily busy — 'a bad Saturday night' — and a [crisis standards of care] event was not as clear as plans had assumed," according to the report. "The situation was much more dynamic."

The crisis is putting enormous strain on health care workers, who are striving to do everything they can to save people's lives. And communities may be paying the price for this even after the pandemic ends, warns Mateen.

"We'll get through the pandemic, but you'll have worked ragged a generation of doctors who might not be able to give you their all the next 10 years," says Mateen. "I don't want to paint them as martyrs, but it's not easy, and I'm genuinely worried about them and how much they can physically and emotionally and mentally go through."