Accessibility links
Moderna's COVID-19 Vaccine Candidate Gets More Good News : Shots - Health News The biotech company has new data reinforcing that its COVID-19 inoculation is safe and effective. Moderna is submitting an application to the FDA requesting emergency use authorization. 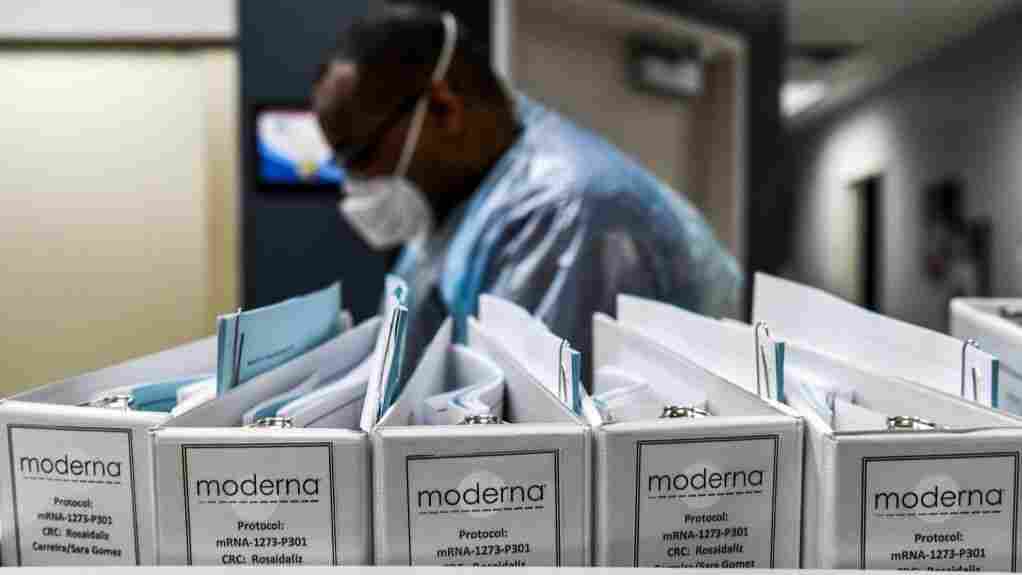 Moderna protocol files for COVID-19 vaccinations are kept at the Research Centers of America in Hollywood, Fla. The biotech company has new data reinforcing that its COVID-19 inoculation is safe and effective. Chandan Khanna/AFP via Getty Images hide caption 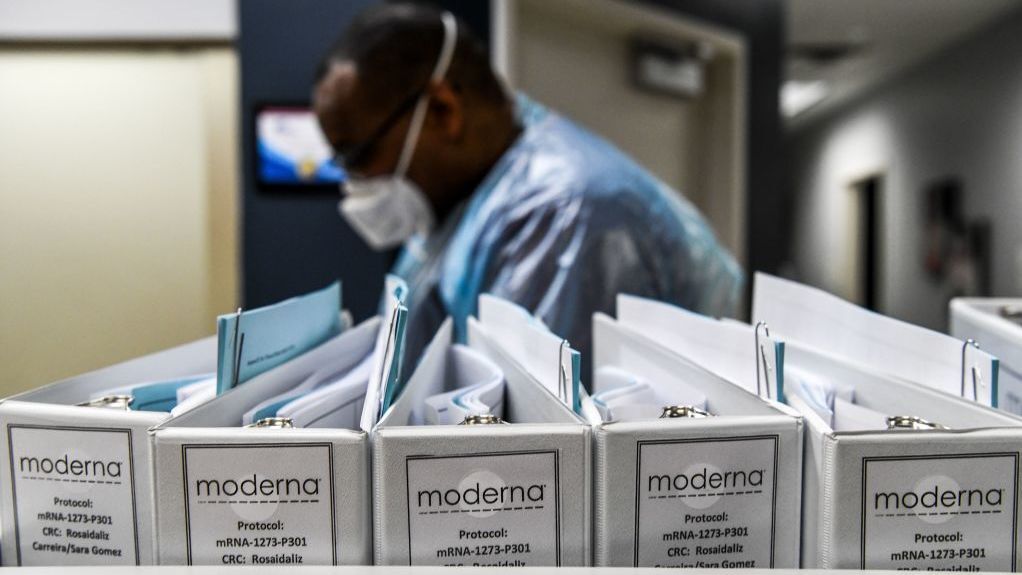 Moderna protocol files for COVID-19 vaccinations are kept at the Research Centers of America in Hollywood, Fla. The biotech company has new data reinforcing that its COVID-19 inoculation is safe and effective.

The biotech company Moderna released new data Monday morning that strengthens the case for its COVID-19 vaccine. It concludes the vaccine is 94% effective — and strongly protects against serious illness. Based on these latest findings, the company plans to submit an application for emergency use authorization to the Food and Drug Administration today.

They build on Moderna's previously reported findings, based on a smaller number of cases detected in its study of about 30,000 volunteers.

Overall, the study identified 185 cases in the people who received a placebo shot, compared with 11 cases in people who got the active vaccine. These latest findings are similar to results from Pfizer, which has developed a similar vaccine. And, like the Pfizer vaccine, this one seems to prevent severe cases.

"There were 30 cases on placebo and zero cases that were on the vaccine," says Dr. Stephen Hoge, the president of Moderna. "So, it looks like in the trial we've been 100% effective at preventing severe COVID-19, which is really what's driving the burden of disease in hospitals and ultimately straining our public health systems."

Based on those findings — and an analysis of the vaccine's safety and side effects — Moderna has decided it has enough information to submit an application to the FDA. The agency will consider granting emergency use authorization for the product in the coming weeks.

"They will receive a good stack of paper," Hoge says, "but they've been receiving paper almost continuously from when we started."

Pfizer applied for emergency use authorization on Nov. 9 for its COVID-19 vaccine. The FDA will hold its advisory committee to discuss that application on Dec. 10. That meeting is open to the public.

The FDA's charge is to assure that drugs are both safe and effective, and the agency says it is not cutting corners when it comes to COVID-19 vaccines, which will potentially be given to many millions of healthy people.

"They still have an important and solemn responsibility to review that data and develop an independent perspective on it," Hoge says, "and that's not an easy thing to do on a short time horizon."

Moderna expects that on Dec. 17, the FDA will be ready for a public meeting to discuss this data. A vaccine could get the thumbs-up shortly thereafter. Either or both the Pfizer and Moderna vaccines may start to become available in mid to late December, though supplies will be limited.

Both use the same novel technology. Instead of injecting a weakened or dead virus, which is a common strategy for vaccines, these products are essentially small pieces of genetic material. When that's injected into a person's arm, it's picked up by cells in the immune system. The cells read the genetic code and use that to produce a protein that is actually a key fragment of the coronavirus. The body then builds antibodies that latch onto that fragment, so if and when someone encounters the actual coronavirus, the body is primed to fight it off with antibodies.

Though the key action is happening at a cellular level, inoculation can trigger noticeable symptoms, ranging from a sore arm to achiness, or even fever and flu-like symptoms.

"You feel terrible for a day or two but then you're fine," del Rio says.

That's the price of getting a vaccine that protects you, in the case of COVID-19, from a potentially deadly disease. But del Rio says it is a complication in administering the vaccine, because people who get these symptoms after a shot might think the vaccine actually gave them COVID-19.

"We're going to have to do very good messaging to explain to people this is not COVID, it's a side effect of the vaccine and it's OK to have it," del Rio says. "It actually means the vaccine is working."

The vaccine studies have been designed to show whether a shot prevents someone from falling ill. But scientists don't yet know whether people who are vaccinated can still get infected but remain without symptoms. That's important because if a vaccine can prevent even silent infections, it can further reduce the spread of the pandemic.

Hoge said the company is collecting data to look for those silent infections among vaccinated volunteers, but that information won't be in hand until early next year. So, it's possible that some people who are vaccinated can still spread the virus.

"That's why I tell people when you get vaccinated, continue wearing your mask," del Rio says. "We're going to know later if the vaccine actually prevents infection."

He says it's remarkable how quickly all this has come together — less than a year from the time the novel coronavirus was first identified, to now, apparently on the verge of having tens of millions of doses of vaccine ready to go.

"A vaccine that prevents people from getting, sick, especially from getting critically ill? It's a great vaccine right now," del Rio says. With nearly 2,000 deaths per day, "My God, we really need this vaccine."