Accessibility links
U.S. Purchase Of More Pfizer Coronavirus Vaccine Doses Could Be Tricky : Shots - Health News A Pfizer board member says the government declined to buy more doses beyond the initial 100 million already agreed upon. Demand from other countries could complicate future purchases.

U.S. Government May Find It Hard To Get More Doses Of Pfizer's COVID-19 Vaccine

U.S. Government May Find It Hard To Get More Doses Of Pfizer's COVID-19 Vaccine 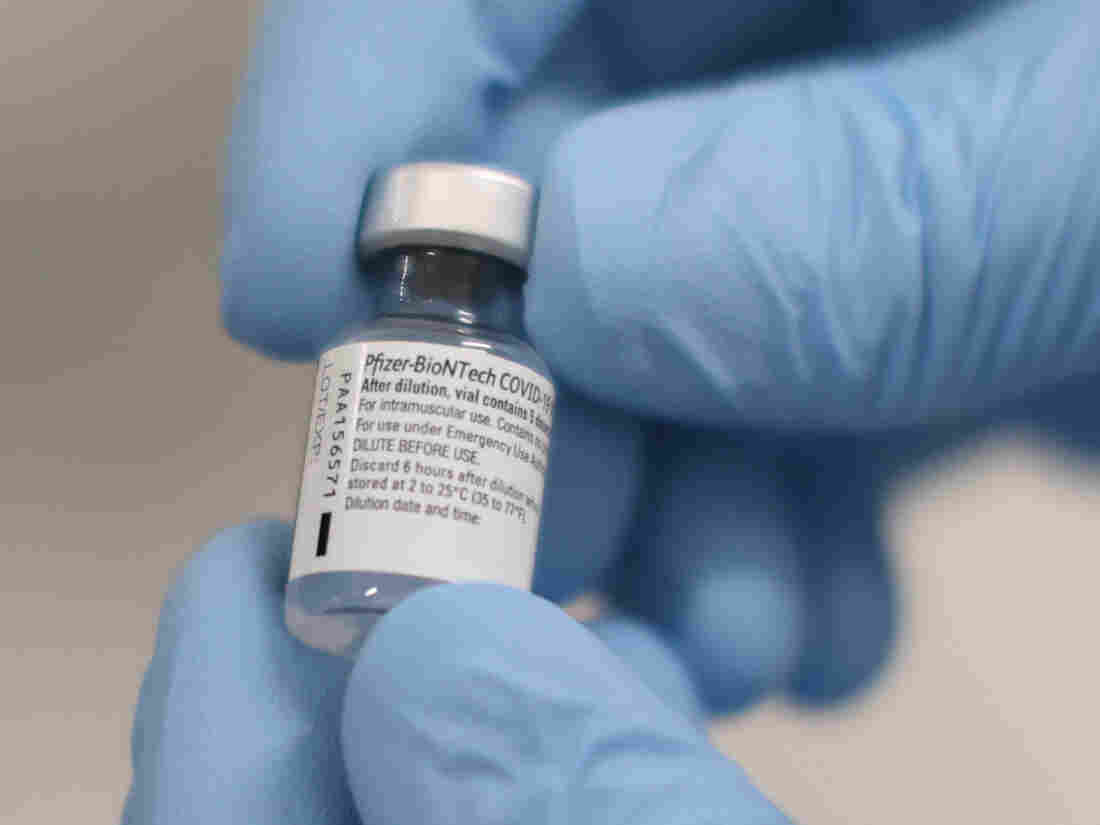 A vial of the COVID-19 vaccine developed by Pfizer and BioNTech that was used at the Royal Victoria Hospital in Belfast, U.K., on Tuesday. Liam McBurney/Bloomberg via Getty Images hide caption 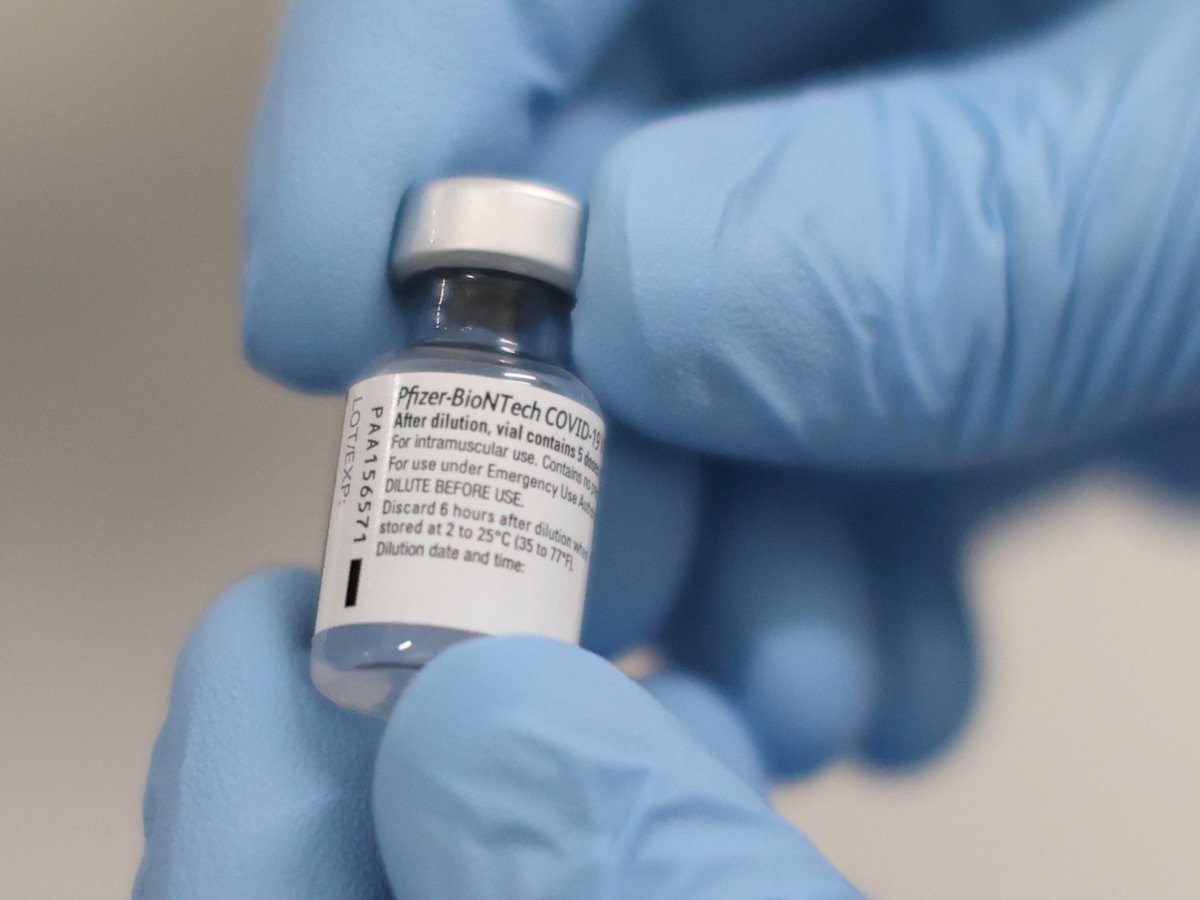 A vial of the COVID-19 vaccine developed by Pfizer and BioNTech that was used at the Royal Victoria Hospital in Belfast, U.K., on Tuesday.

With Pfizer's COVID-19 vaccine poised for Food and Drug Administration authorization for emergency use, there's speculation about when the United States will buy another batch of doses — and whether the Trump administration already missed its chance.

Although a Pfizer board member says the government declined to buy more doses beyond the initial 100 million agreed upon in July, Health and Human Services Secretary Alex Azar told PBS Newshour that this is inaccurate. The company never made a formal offer saying how many doses it would deliver and when — two things that are needed to sign an additional deal.

"They refused to commit to any other production or delivery by a time certain," he said, explaining that the initial doses will be delivered by March, and there is an option for the government to buy another 500 million after that. "I'm certainly not going to sign a deal with Pfizer, giving them $10 billion to buy vaccine that they could deliver to us five, 10 years hence. That doesn't make any sense."

Azar said the government started new negotiations with Pfizer in early October, but "they still resisted giving us any date by which they would do it." He said they're making progress in their negotiations, but the government is willing to use "every power of the Defense Production Act" to get the additional necessary Pfizer vaccine doses.

Pfizer board member and former FDA Commissioner Scott Gottlieb told CNBC Tuesday that the federal government declined "multiple times" to purchase more doses of Pfizer's vaccine over the summer, and it may have missed out on getting more in the second quarter of 2021.

Gottlieb noted that the government has agreements to buy hundreds of millions of doses of vaccines from six manufacturers as part of Operation Warp Speed, the Trump administration's more than $10 billion push to make a coronavirus vaccine available in record time. He suspects the government is betting more than one vaccine would ultimately get the FDA's authorization.

"That perhaps could be why they didn't take up that additional 100 million option agreement, which really wouldn't have required necessarily them to front money. It was just an agreement that they would purchase those vaccines," Gottlieb said. "So Pfizer has gone ahead and entered into some agreements with other countries to sell them some of that vaccine in the second quarter of 2021."

And that could mean there's less available for the U.S. government to buy when it's ready to do so.

The New York Times first reported Monday on the negotiations for more doses, saying that Pfizer offered the U.S. government between 100 million and 500 million additional doses and warned that its vaccine could be in short supply, given demand around the world. As a result, a second allotment might not be available to the U.S. until next June.

A senior administration official told reporters during a briefing Monday that the Times reporting wasn't accurate: "We're in the middle of a negotiation right now and we can't talk publicly about it, but we feel absolutely confident we will get the vaccine doses for which we've contracted and will have a sufficient number of doses to vaccinate all Americans who desire one before the end of second quarter 2021."

A spokesperson for HHS echoed that explanation in a series of tweets on Tuesday, saying, "At no time did OWS turn down an offer from Pfizer for any number of millions of doses having a firm delivery date and quantity, and it's a shame that someone is misinforming the American public."

Pfizer didn't respond to NPR's request for comment on this story.

In July, Pfizer signed a $1.95 billion agreement with Operation Warp Speed. As part of the deal, the government agreed to purchase 100 million doses of Pfizer's vaccine, but the transaction would occur only if the vaccine Pfizer is developing in partnership with BioNTech, a German company, received the FDA's OK.

It's not unusual for a company under contract with the government to suggest a modification, such as more doses in the first allotment, said Franklin Turner, a partner at McCarter & English who specializes in government contracting. But there can be any number of reasons the government might decline.

"If I had a dime for every time the government took a step or a position that seems counterintuitive and quite frankly, mind-boggling, I'd be a very rich human being at this point in my life," Franklin said.

Pfizer's vaccine could be given the green light this week. A panel of outside experts is set to convene on Thursday and advise the FDA on whether to authorize the vaccine for emergency use in the pandemic.

It's possible the government could have gotten better follow-on delivery contract terms to begin with, said James Love, director of Knowledge Ecology International. Though he noted that the intellectual property rights in the contract aren't particularly favorable to the federal government either, as NPR has reported. "At some point, not placing orders when the whole world is placing orders, was a mistake," Love said.

If the U.S. did miss out on more doses because it declined them, it would be "a spectacular failure," said Rena Conti, a health economist at Boston University.

"Contracts are forward-looking, that means we could have (and did) sign contracts with other manufacturers that reserve future capacity when it became available," she said. "We should have [been] including language in every contract reserving the rights to more quantity in advance at a given price."

Although the Pfizer contract includes the option to buy an additional 500 million doses of its vaccine, that transaction would require a separate agreement, and the price would be subject to change, the contract says.

"Having more quantity reserved is smart economics given the uncertainty entailed in which vaccine comes to market in a given time period, and which vaccine will be most safe, [effective] and able to manufacture at scale," Conti said. "There is no downside cost or risk to having these forward contracts and there is plenty to gain for the American public."