For Overwhelmed And Burnt Out COVID-19 Contact Tracers, Help Is (Hopefully) Coming

For Overwhelmed And Burnt Out COVID-19 Contact Tracers, Help Is (Hopefully) Coming 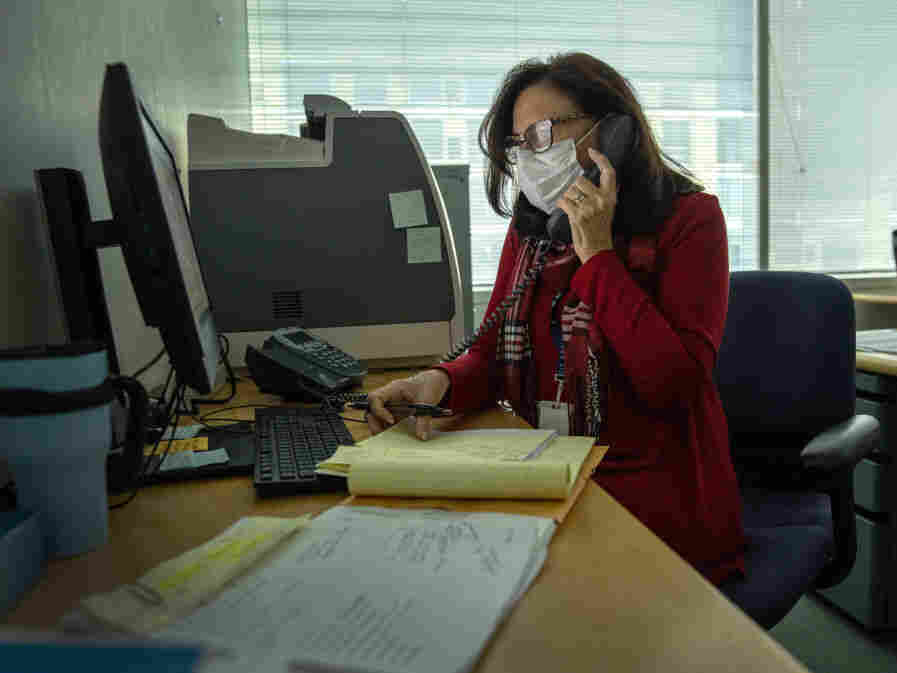 Contact tracer Toni Parlanti of Stamford, Conn., calls a person identified as having been potentially exposed to the coronavirus this week. States and territories report they have more than 70,000 people working on contact tracing as of December. John Moore/Getty Images hide caption 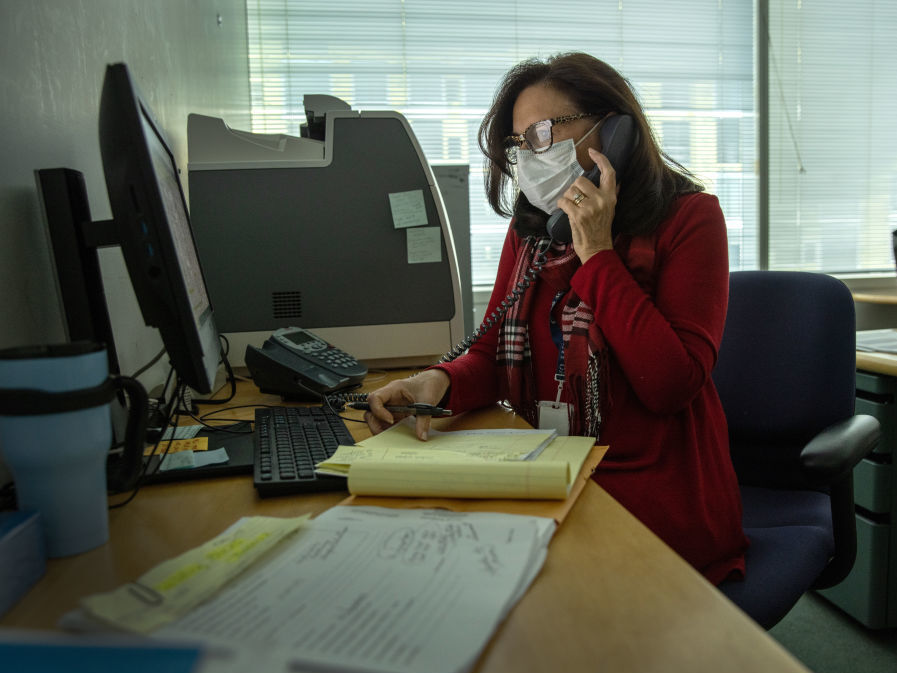 Contact tracer Toni Parlanti of Stamford, Conn., calls a person identified as having been potentially exposed to the coronavirus this week. States and territories report they have more than 70,000 people working on contact tracing as of December.

It's an incredibly difficult time to be a contact tracer in the United States. Just imagine having to call up a stranger a few days before Christmas to tell them they've been exposed to COVID-19 and need to quarantine for 14 days.

For public health workers tasked with making contact tracing calls, "these are very challenging conversations at any time, but the longer the pandemic continues, especially around the holidays, it's difficult to ask folks to quarantine," says Lindsey Mauldin, who oversees Pennsylvania's contact tracing program.

But those contact tracing calls must go on. In fact, according to NPR's most recent survey, contract tracing programs in many states have grown as agencies push to keep up with mushrooming case numbers.

In Washington state, "we have gone from an average of 300 case investigations [per week] in October to over 5,000 [a week] since Thanksgiving," health department spokesperson Teresa McCallion says. "It's been crazy."

There are now 70,538 contact tracers working across the U.S., a more than sixfold increase since the pandemic began and NPR first surveyed state and territorial health departments about their contact tracing workforces.

The 33 state and territorial health departments that responded to NPR's December survey, done in collaboration with the Johns Hopkins Center for Health Security, reported that they've added nearly 20,000 tracers since the last survey in October. There is an additional reserve workforce of 13,273.

Because 20 states did not respond to the latest survey, the real number of the contact tracing workforce may be even higher. Nearly two-thirds of departments that responded to the survey said they were planning to add still more staff.

These survey results make clear that "health departments are still invested in contact tracing," says Crystal Watson, a senior scholar at the Johns Hopkins Center for Health Security who oversaw the survey in collaboration with NPR. "They're trying really hard to keep up as best they can with the cases that they're seeing."

And there are glimmers of hope. Vaccines are starting to be distributed and administered, which will hopefully slow the spread enough that the contact tracing can start to keep up. There is more than $22 billion of funding included in the bill that just passed Congress on its way to health departments to fund testing and contact tracing, assuming it ultimately gets signed into law.

Here are six key takeaways from the latest survey results:

1. Many states are increasing staff, but most still don't have enough to match need

Twenty-nine states told NPR they have hired more contact tracers to meet rising demand, and 20 said they would hire more soon. But none of the states that responded with updated contact tracing staff numbers currently has enough staff to keep up with case numbers.

The analysis, based on state case counts over the past 14 days, was done using an estimating tool developed by the Fitzhugh Mullan Institute for Health Workforce Equity at the George Washington University. As in June, August and October, NPR assumed workers are calling 10 contacts per case and that tracers reach 45% of contacts and follow up with them every other day — a conservative estimate, to reflect the real-world challenges health workers face.

Based on earlier staffing data collected by NPR, Montana, Hawaii and the territory of Guam currently have enough public health workers and reserve staff to investigate every case, according to an NPR analysis. (The only health department that currently has enough outright is the Northern Mariana Islands, whose 13 contact tracers can easily keep up with case numbers in the single digits.)

2. Overwhelmed tracers are having to triage

Most states reported in the latest survey that in the face of a surge of cases, they have had to change the way they operate to focus on clusters or high-risk populations.

In Alaska, "we have added workforce but also changed [our] practice to focus on persons in congregate settings, high risk, and people who have more recent test results," says Tari O'Connor, the state's deputy director of public health.

Michigan reported moving "away from formal tracing of household contacts," and in Maine, the department focuses contact tracing "on people younger than 18 or 65 and older." Several departments mentioned focusing on identifying outbreaks.

One significant development was new guidance from the Centers for Disease Control and Prevention on how to prioritize contact tracing programs in the face of a surge, first published in late November. Seven states referenced using this guidance to figure out how to keep up with contact tracing despite an overwhelming number of new cases.

"I think previously states really just didn't have concrete advice about how to prioritize their resources when they are becoming overwhelmed in contact tracing," says Watson of Johns Hopkins. "So that was a big contribution, I think, from the CDC."

3. Most states ask about what support people need to stay home

Contact tracing only works if the people whom you inform they've been infected or exposed to the coronavirus are able to isolate themselves. Ideally contact tracing programs would help connect people to the support they need to be able to do that, says Katie Bollbach, director of the nonprofit Partners In Health's unit focused on the COVID-19 response in the United States.

Contact tracing calls are about more than "just, 'Hey, you're infected' or 'You've been exposed,' " she says. The conversations include a critical second part with questions such as "What do you need? What is your current situation? And what would you require to be able to stay home or to safely quarantine and isolate?" Bollbach says.

For the first time, in collaboration with Partners In Health, NPR and Johns Hopkins surveyed health departments on this crucial part of contact tracing programs. More than two-thirds of health departments that responded to the survey do formally screen contacts for their social needs such as space to quarantine or isolate, connection to health care or need for food. But five respondents said there is no official question in the script to ask about these needs.

"[It's] very encouraging to see that almost all of the respondents are screening in some way for social support needs," Bollbach says.

In Utah, "a lot of families are hungry and they don't have food to provide for their kids or housing — those are the two needs that I've seen," says Laura Sofia Ortega-Flores, a contact tracer and investigator for the Utah Department of Health.

She remembers a few weeks ago, on the phone with someone who had tested positive for the coronavirus, she heard a child crying in the background. "Her daughter was crying because she was hungry," she says. "It is heartbreaking to see that — it really is affecting families." She was able to connect that family to a local food bank — and she regularly follows up to make sure people's needs are met.

Not every state's program is so hands-on. In some places, contact tracers simply pass along the number of an outside agency that might help. In some states, the referral process varies depending on the county or health district.

Overall, Watson of Johns Hopkins says, the results are encouraging. "I was surprised just at the sheer volume of states that are really focused on this care coordination component of contact tracing — it seems to be a core component of what states are doing to try and support people through this time," she says.

After asking if a person needs social support to isolate or quarantine, Ortega-Flores says Utah's program includes community health workers who can help provide resources to support them. Once, the team talked to someone on a Wednesday who had tested positive and was going to be evicted on Friday. "We were able to find a home within that same day," she says.

But of the 33 state and territorial health departments that responded to NPR's survey, "less than half the programs reported having a dedicated person or cadre of workers to help connect people to support," Bollbach notes. And several programs described "only giving someone a number to call and not more actively making a connection," she says.

Establishing whether people who need help with child care or medications or rental assistance is important, not just at the individual level, but at the policy level, Bollbach says. For instance, if many people report they can't isolate without help with food, that tells local leaders they need to invest in local food banks or use grocery delivery services to meet this need.

In Pennsylvania, a team of 10 "social service coordinators" are part of the contact tracing unit, Mauldin says. Those workers track the resources that people need, and "we're able to then provide some feedback to our teams," including at several state agencies. That data, she says, can help guide "policy to be able to meet people's needs during this really challenging time."

Bollbach says the survey results highlight the need in the next phase of the response for "additional dedicated folks within the growing public health workforce dedicated specifically to this set of work."

5. More federal funding will help contact tracing get back on track

Contact tracing programs had been bracing for a funding cliff at the end of the year. Now, if it gets signed into law, the $22.4 billion included in the latest congressional funding bill for health departments to do coronavirus testing and contact tracing will be "an enormous relief," Bollbach says.

For the months that lawmakers were at a stalemate, "it's been tough," for many local health departments, Bollbach says. There have been volunteer forces and staff reassignments away from other important work. "Folks have just been scrappy and creative and trying to make do." Now they're holding their breath, hoping this funding gets signed into law.

"That's a substantial sum of money, particularly for state public health departments who have been chronically underfunded," says Marcus Plescia, chief medical officer at the Association of State and Territorial Health Officials.

6. Contact tracing will be more effective as the vaccine rolls out

"I do think there's just a little bit more of a sense of optimism and, you know, kind of a can-do attitude now that we have the vaccine on the horizon," Plescia says. "I think we'll start to see a lot more energy into things like contact tracing because it's now seen as part of a package — that, together, all of these things can really start to help to bring rates down."

The impact of this funding will also be "conditioned on governors taking action to slow the spread," such as targeted business closures, stay-at-home orders, mask mandates and more, says Watson of Johns Hopkins.

At the same time, as COVID-19 vaccinations begin, the hope is that the spread of the virus will slow, and "contact tracing is going to become more useful again once we get cases under better control," Watson says. She says vaccines and contact tracing are both important public health tools and "we can get back to a sense of normalcy much more quickly if we have both components of the public health response going at the same time."