Accessibility links
How To Overcome COVID Vaccine Hesitancy: Try Truth From Trusted Messengers : Shots - Health News As the first COVID-19 vaccines begin to be rolled out across the U.S., community leaders in diverse groups already are working hard to dispel misinformation and reach skeptics with truth. 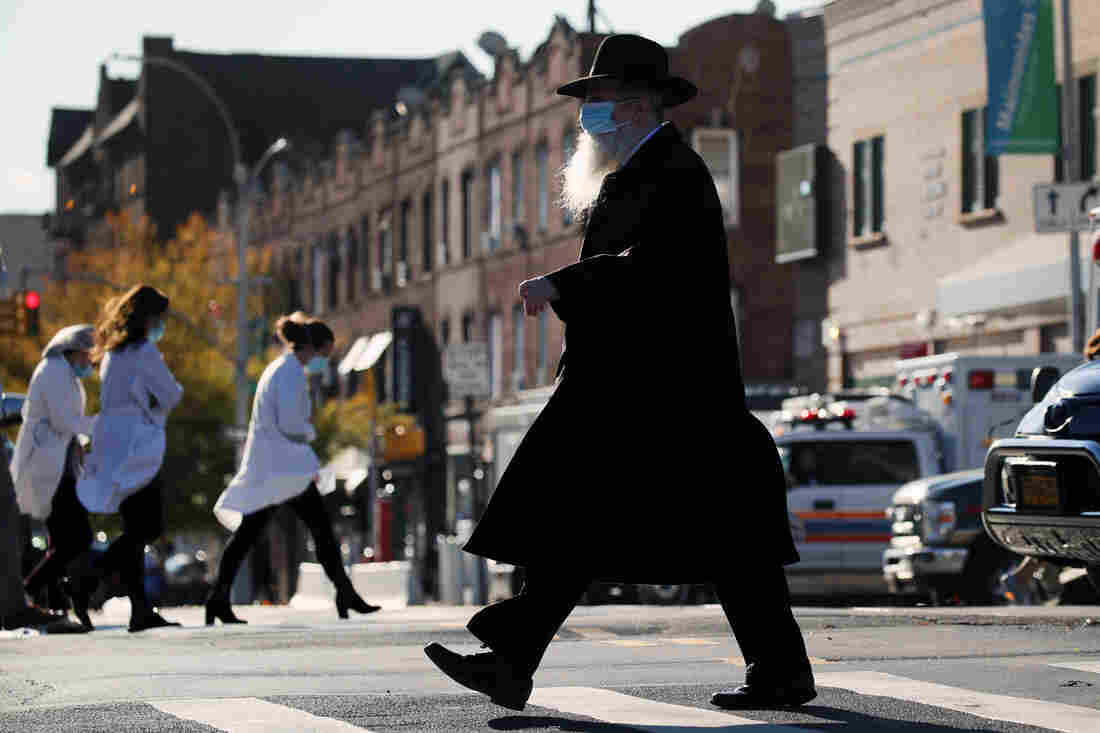 A Hasidic man and medical workers cross paths near the Maimonides Medical Center in Brooklyn, N.Y., in November. When public health messaging comes from community leaders, it's much more likely to be adopted, research on diverse groups finds. Spencer Platt/Getty Images hide caption 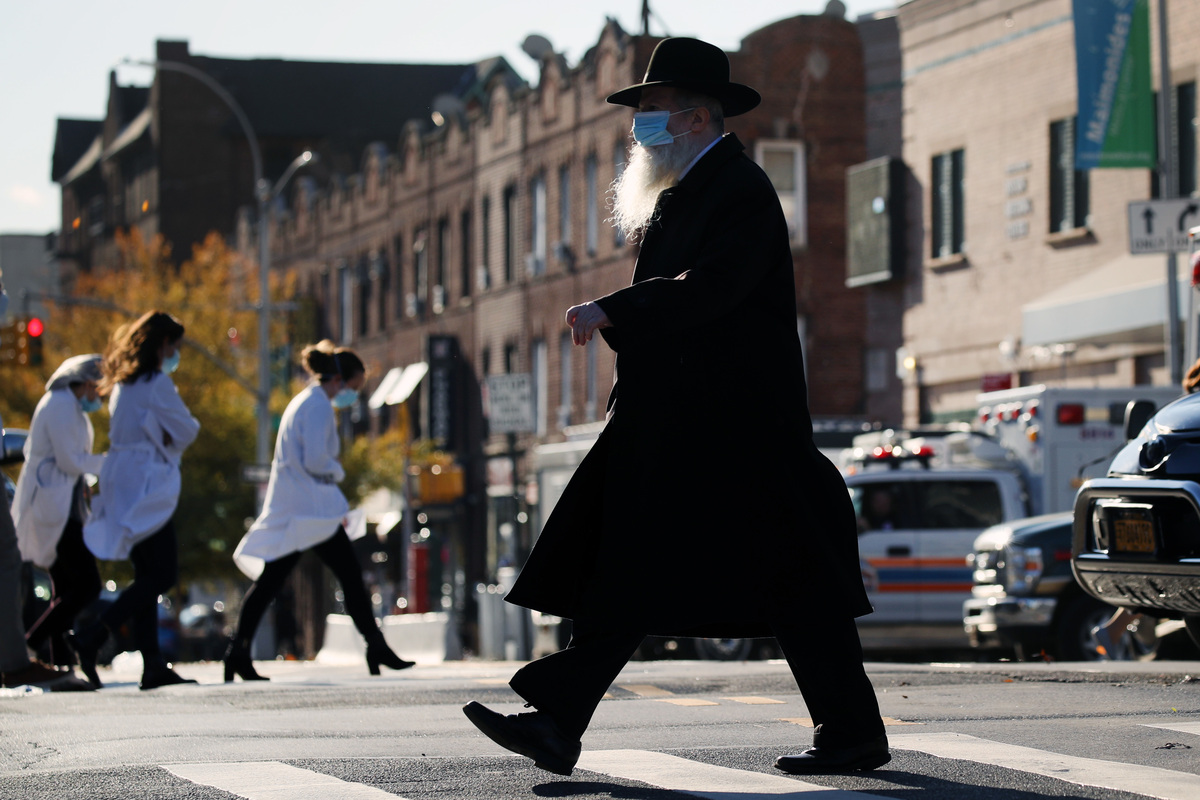 A Hasidic man and medical workers cross paths near the Maimonides Medical Center in Brooklyn, N.Y., in November. When public health messaging comes from community leaders, it's much more likely to be adopted, research on diverse groups finds.

The U.S. Department of Health and Human Services booked an unusual guest interviewer for one of its public health events this fall: Shulem Lemmer, the first Hasidic singer to sign with a major record label.

Lemmer has no particular expertise in public health, but he grew up in Brooklyn, home to many ultraorthodox Jews like himself. He's seen as a trusted messenger in parts of the Hasidic community that, despite suffering a disproportionate number of hospitalizations and deaths from COVID-19, have on some occasions resisted New York's pandemic restrictions.

In the end, the interview never aired — HHS changed its mind about having entertainers explain COVID-19. Still, public health experts say the idea of enlisting respected and well-known leaders to help explain the health message is exactly the right way to disarm and persuade skeptics — and more crucial than ever this winter as cases and deaths from the coronavirus surge all across the U.S .

"As we continue to talk to people about the virus, "waving journal studies and talking points won't work in many communities," says Robert Blendon, professor emeritus of public health, policy and political analysis at Harvard T.H. Chan School of Public Health.

That's particularly true, Blendon notes, in ethnic and racial communities "that have a history of being demonized, lied to, or exploited in the U.S. when it comes to their health."

Dr. Warren Reuben, director of Alabama's Tuskegee University National Center for Bioethics in Research and Health, notes the lasting and continuing impact of generations of racism and racial disparities in health care that were underscored by the Tuskegee experiments on Black men in the 1930s, but didn't start or end there.

"Black and brown communities are being disproportionately impacted by COVID-19. We don't want to see a widening of the disparity because the vaccines don't have representation from people of color."

"That history evokes fear in Blacks that translates into many being fearful of clinical trials and has them anxious about the coronavirus vaccines," Reuben says.

Persistent racism in health care is one reason the National Medical Association announced that it will be vetting vaccine data itself and publishing its conclusions.

"The times have called for this," says Dr. Leon McDougle, the NMA's president, who himself has signed up to be a clinical trial participant with NIH's COVID-19 Prevention Network. The network is conducting late-stage clinical trials on vaccines to prevent COVID-19, as well as on monoclonal antibodies for treatment.

Clergy consultants help get the word out

To increase participation by communities of color, the network has also created a faith initiative, which includes "faith ambassadors" and more than 30 clergy-consultants from the Black, Latinx and American Indian/Alaska Native communities to help get the word out.

"Black and brown communities are being disproportionately impacted by COVID-19," McDougle notes. "We don't want to see a widening of the disparity because the vaccines don't have representation from people of color."

Black People Are More Hesitant About A Vaccine. A Leading Nurse Wants To Change That

According to a recent U.S. survey by the Kaiser Family Foundation, "about a quarter (27%) of the public remains vaccine hesitant, saying they probably or definitely would not get a COVID-19 vaccine even if it were available for free and deemed safe by scientists." That number jumped to 35% among Black Americans surveyed.

Dr. Georges Benjamin, the long-time executive director of the American Public Health Association, says today's public health workers would do well to borrow a strategy that helped stem the AIDS epidemic: tailoring the message to different constituencies. In that case, the health message first focused on safe sex in the gay community, he notes, and then, a couple of years later, added messaging on the risk of IV drug use as the virus moved into the heterosexual community.

For example, a smoking cessation campaign Pérez-Stable worked on years ago in the Latino community focused on the health of male smokers, but wasn't successful, he says, until the messaging changed to stress the health benefits for the smoker's wife and children if the men stopped smoking.

To make a public health message persuasive, personal stories from someone who is most like you are critically important, agrees Tom Frieden, a former director of the Centers for Disease Control and Prevention who now heads the global health initiative Resolve to Save Lives. To cut through skepticism, he says, public health campaigns need "trusted messengers and trusted messages."

Frieden points to Tips from Former Smokers, a CDC campaign he helped launch in 2012, that shared the personal stories of illness and death from tobacco users, as well stories of those who had quit successfully.

The multifaceted campaign is credited with helping a million smokers quit, and includes tailored online stories and videos from people who are African American, Native American, Asian American, Latino, LGBT, as well as one from veterans and another from people who grapple with mental illness.

"What we have to do is insure that the informal work force is inclusive of all of these communities," says Loyce Pace, the president and executive director of the Global Health Council, and a member of President-elect Joe Biden's COVID-19 task force.

"The best approach is for the states to find out who to reach out to in each tribe in order to gain the community's trust."

Dr. Mary Owen, director or the Center of American Indian and Minority Health, University of Minnesota

NIH aims to do just that with a new $12 million initiative launched in September — the Community Engagement Alliance Against COVID-19 Disparities, that is hiring "messengers who live, work, and worship in the same communities" says Pérez-Stable. These workers are leading outreach and engagement efforts in ethnic and racial minority communities disproportionately affected by the virus.

Dr. Mary Owen, director of the Center of American Indian and Minority Health at the University of Minnesota, says the impact of the coronavirus on Indian communities "is so devastating that it is absolutely critical that we do this right," and points to high uptake of the flu vaccine among Native Americans as the example that it can be done.

Owen, a member of the Tlingit nation, says a successful strategy for the COVID-19 vaccine must recognize that there are 574 distinct tribes, each with its own leaders and influencers. The best approach, she says, "is for the states to find out who to reach out to in each tribe in order to gain the community's trust."

'Hold Their Feet To the Fire': Getting A COVID-19 Vaccine To Hard-Hit Indian Country

Of course, not all Native people distrust the government, Owen notes, "but even a few folks not getting the vaccine is impactful in a population as small as ours."

Rita Carreón, vice president for health at UnidosUS in Washington, D.C., notes that in many U.S. Latino communities her group works with, lay people who have been trained as community health workers — promotoras de salud – are trusted and already helping to dispel misinformation and misconceptions about COVID-19 and the vaccine needed to fight it.

Some communities have built the infrastructure for vaccine education over the past 10 months by already going beyond standard messaging. The Bay Area Regional Health Inequities Initiative, for example, based in Oakland, Calif., is a consortium of eleven local health departments in the culturally and racially diverse region who are working with more than 200 community partner organizations to focus on health and economic opportunity.

"BARHII was formed to address the durable, decade-wide gap in life expectancy that exists between communities in the Bay Area," explains Melissa Jones, executive director of the organization.

"That gap is the result of systemic factors, not individual choices," she says, "so BARHII and our members focus on systemic solutions: safe and secure housing, universal basic income, medical bias, well-paying jobs for all residents, and climate resilience in the face of extreme heat and wildfires."

The COVID-19 pandemic, she says, "has been a sobering demonstration of how Black and brown communities in particular are excluded from economic and social supports, and how centering their needs and concerns is essential in maintaining public health."

How Multigenerational Families Manage 'Social Distancing' Under One Roof

The standard CDC guidance to isolate in your own room and bathroom if you have COVID-19 symptoms won't work if your home is small and crowded, notes Jones, or if you are an essential worker living paycheck to paycheck or self-employed, so don't get sick-pay — or if you don't have a home.

In neighborhoods that are largely Latino, BARHII's member health departments hired Spanish speaking community workers to get the word out, Jones says, rather than have case workers speak through a translator.

That helped them gain enough trust so that many community members who were asked to isolate themselves after contracting the virus or enter quarantine because they were exposed accepted the agency's help in finding temporary housing, food, and economic relief to make up for lost wages for that period.

All those interventions help stop the spread of the virus — and stop the pandemic.

"Spanish speakers," Jones says, "use correct idioms, may know the person they are working with from the community, and understand specific fears — such as worries that filling out forms for the vaccine could risk deportation for themselves if they are undocumented or for undocumented family members living with them."

McDougle and others note that while resistance to immunization must be addressed, most people all across the U.S. are actually eager to be vaccinated — and help stop the pandemic.

"We know many in our community already have their sleeves rolled up," he says, and it can feel patronizing for anyone to assume otherwise.

Avrohom Weinstock, the chief of staff of Agudath Israel of America, an Orthodox Jewish umbrella group, says the ultraorthodox community "has always cared deeply about health — whether it is forming and managing Hatzalah, a massive volunteer ambulance corps, or emerging as the largest donors of [convalescent] plasma, which has been used to treat the virus."

In early October, for example, says Weinstock, the organization helped give out 400,000 masks in the New York City area, and they were all gone within hours.

"The community has a lot of questions about the vaccine, based on a great deal of reading and community discussion. This is all very new," says Weinstock. "But if their own doctors can assure them it's safe and effective, then they are as motivated as any other group to be vaccinated and put the pandemic behind us."

Perhaps not surprisingly there is one trusted messenger in the U.S. who, community health leaders say, crosses many constituencies. Unsolicited, both the NMA's McDougle and Unidos' Carreón invoke the name of Anthony Fauci — director of the National Institute of Allergy and Infectious Diseases and newly appointed chief medical adviser to President-elect Biden — as someone deeply trusted in their communities.

Fran Kritz is a health policy reporter based in Washington, D.C., who has contributed to The Washington Post and Kaiser Health News. Find her on Twitter: @fkritz