Accessibility links
Pandemic Strain Pushes Some Health Care Workers Toward Unions : Shots - Health News Many front-line health workers who have faced a perpetual lack of PPE and inconsistent safety measures believe the government and their employers have failed to protect them from COVID-19. 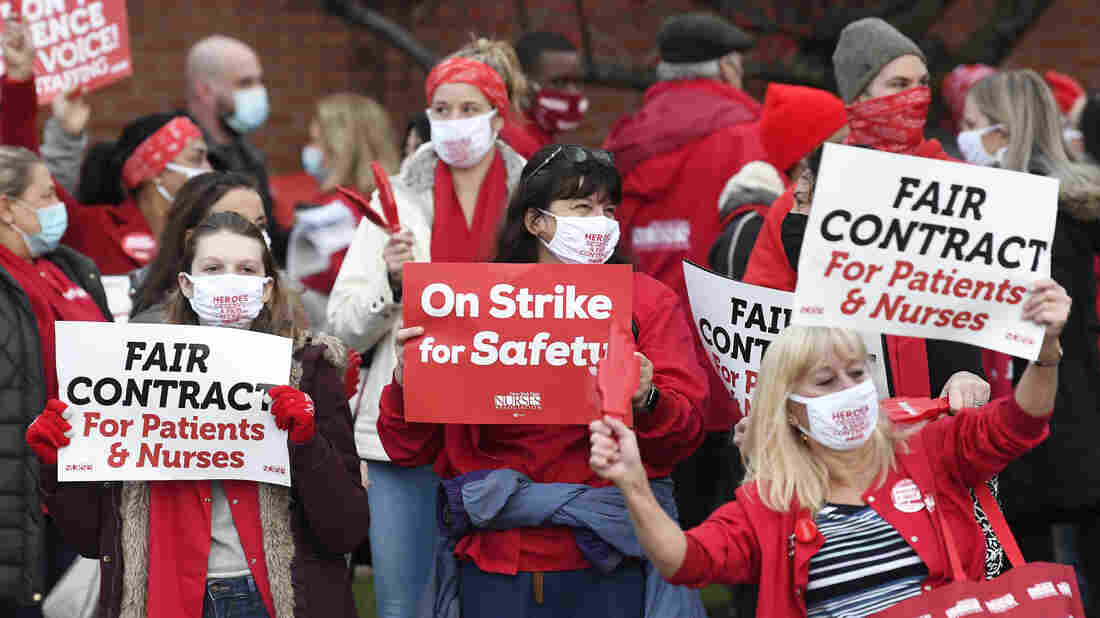 Nurses at Albany Medical Center picketed on Dec.1, asking for more personal protective equipment. They say they're having to reuse N95 masks up to 20 times. Hans Pennink hide caption 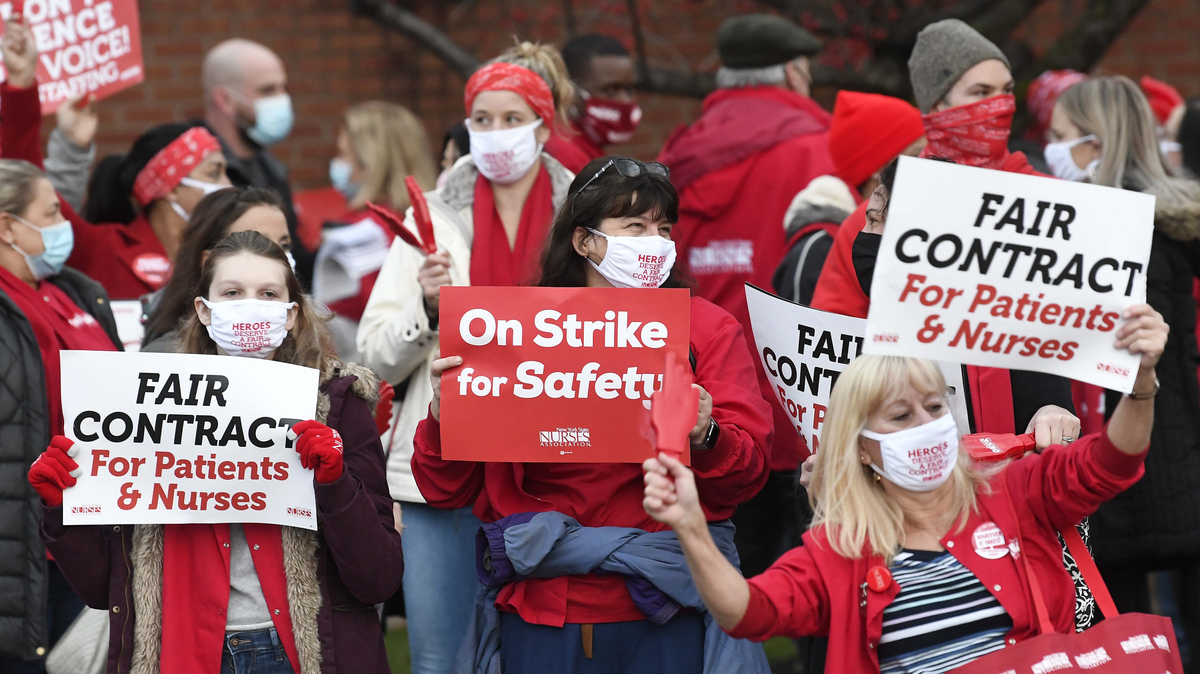 Nurses at Albany Medical Center picketed on Dec.1, asking for more personal protective equipment. They say they're having to reuse N95 masks up to 20 times.

In September, after six months of exhausting work battling the pandemic, nurses at Mission Hospital in Asheville, N.C., voted to unionize. The vote passed with 70%, a high margin of victory in a historically anti-union state, according to academic experts who study labor movements.

The nurses had originally filed paperwork to hold this vote in March but were forced to delay it when the pandemic began heating up. And the issues that had driven them toward unionizing were only heightened by the crisis. It raised new, urgent problems too, including struggles to get enough PPE, and inconsistent testing and notification of exposures to COVID-positive patients.

They're far from alone in their complaints. For months now, front-line health workers across the country have faced a perpetual lack of personal protective equipment, or PPE, and inconsistent safety measures. Studies show they're more likely to be infected by the coronavirus than the general population, and hundreds have died, according to reporting by KHN and The Guardian.

Many workers say employers and government systems that are meant to protect them have failed.

Research shows that health facilities with unions have better patient outcomes and are more likely to have inspections that can find and correct workplace hazards. One study found New York nursing homes with unionized workers had lower COVID-19 mortality rates, as well as better access to PPE and stronger infection control measures, than nonunion facilities.

Recognizing that, some workers — like the nurses at Mission Hospital — are forming new unions or thinking about organizing for the first time. Others, who already belong to a union, are taking more active leadership roles, voting to strike, launching public information campaigns and filing lawsuits against employers.

"The urgency and desperation we've heard from workers is at a pitch I haven't experienced before in 20 years of this work," said Cass Gualvez, organizing director for Service Employees International Union-United Healthcare Workers West in California. "We've talked to workers who said, 'I was dead set against a union five years ago, but COVID has changed that.' " 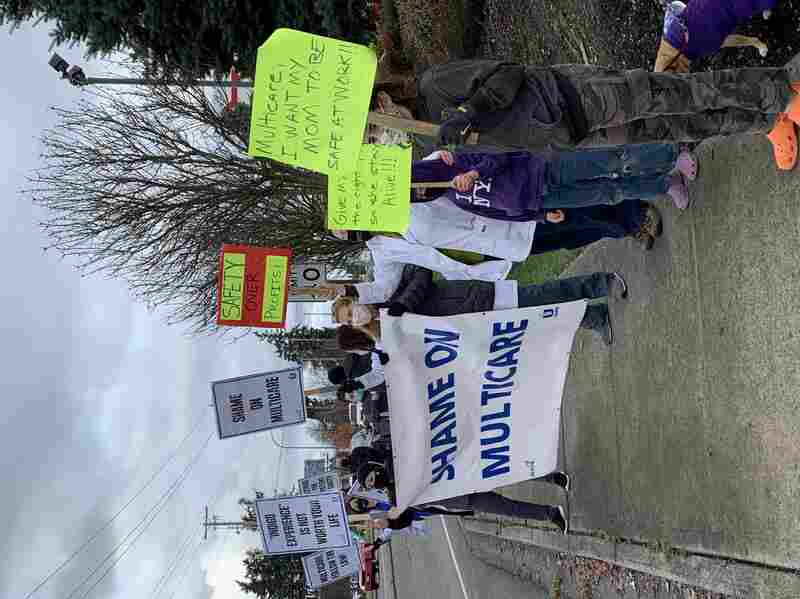 Members of the Union of American Physicians and Dentists went on a two-day strike in November asking for more N95 masks. MultiCare found another vendor for N95s and said it would provide them by mid-December. Marisa Powell hide caption

Labor experts say it's too soon to know if the outrage over working conditions will translate into an increase in union membership, but early indications suggest a small uptick. Of the approximately 1,500 petitions for union representation posted on the National Labor Relations Board website in 2020, 16% appear related to the health care field, up from 14% the previous year.

In Colorado, SEIU Local 105 health care organizing director Stephanie Felix-Sowy said her team is fielding dozens of calls a month from nonunion workers interested in joining. Not only are nurses and respiratory therapists reaching out, but dietary workers and cleaning staff are as well, including several from rural parts of the state where union representation has traditionally been low.

"The pandemic didn't create most of the root problems they're concerned about," she said. "But it amplified them and the need to address them."

In response to union actions, many hospitals across the country have said worker safety is already their top priority, and unions are taking advantage of a difficult situation to divide staff and management, rather than working together.

The nurses at Mission Hospital say administrators have minimized and disregarded their concerns, often leaving them out of important planning and decision-making in the hospital's COVID-19 response.

Early in the pandemic, staffers struggled to find masks and other protective equipment, said nurses interviewed for this story. The hospital discouraged them from wearing masks one day and required masks 10 days later. The staff wasn't consistently tested for COVID-19 and often not even notified when exposed to COVID-positive patients. According to the nurses and a review of safety complaints made to federal regulators, the concerns persisted for months. And some nurses said the situation fueled doubts about whether hospital executives were prioritizing staff and patients, or the bottom line.

A nurse for 30 years, Amy Waters had always been aware of a mostly unspoken but widespread sentiment that talking about unions could endanger her job. But after HCA Healthcare took over Mission Health in 2019, she saw nurses and support staff members being cut and she worried about the effect on patient care. Joining National Nurses United could help, she thought. During the pandemic, her fears only worsened. At times, nurses cared for seven patients at once, despite research indicating four is a reasonable number.

In a statement, Mission Health said it has adequate staffing and is aggressively recruiting nurses. "We have the beds, staffing, PPE supplies and equipment we need at this time and we are well-equipped to handle any potential surge," spokesperson Nancy Lindell wrote. The hospital has required universal masking since March and requires staff members who test positive to stay home, she added.

Although the nurses didn't vote to unionize until September, Waters said, they began acting collectively from the early days of the pandemic. They drafted a petition and sent a letter to administrators together. When the hospital agreed to provide advanced training on how to use PPE to protect against COVID transmission, it was a small but significant victory, Waters said.

"Seeing that change brought a fair number of nurses who had still been undecided about the union to feel like, 'Yeah, if we work together, we can make change,'" she said.

Even as union membership in most industries has declined in recent years, health workers unions have remained relatively stable: Around 7% of health care and social services workers are in unions Experts say it's partly because of the focus on patient care issues, like safe staffing ratios, which resonate widely and have only grown during the pandemic.

At St. Mary Medical Center outside Philadelphia, short staffing led nurses to strike in November. Donna Halpern, a nurse on the cardiovascular and critical care unit, said staffing had been a point of negotiation with the hospital since the nurses joined the Pennsylvania Association of Staff Nurses and Allied Professionals in 2019. But with another surge of COVID cases approaching, the nurses decided not to wait any longer to take action, she said.

A month later, officials with Trinity Health Mid-Atlantic, which owns the hospital, announced a tentative labor agreement with the union. The contract "gives nurses a voice in discussions on staffing while preserving the hospital's right and authority to make all staffing decisions," the hospital said in a statement.

In Colorado, where state inspection reports show understaffing led to a patient death at a suburban Denver hospital, SEIU Local 105 has launched a media campaign about unsafe practices by the hospital's parent company, HealthOne. The union doesn't represent HealthOne employees, but union leaders said they felt compelled to act after repeatedly hearing concerns.

In a statement, HealthOne said staffing levels are appropriate across its hospitals and it is continuing to recruit and hire staff members.

COVID-19 is also raising entirely new issues for workers to organize around. At the forefront is the lack of PPE, which was noted in one-third of the health worker deaths catalogued by KHN and The Guardian.

Nurses at Albany Medical Center in New York picketed on Dec. 1 with signs demanding PPE and spoke about having to reuse N95 masks up to 20 times.

At MultiCare Indigo Urgent Care clinics in Washington state, staff members were provided only surgical masks and face shields for months, even when performing COVID tests and seeing COVID patients, said Dr. Brian Fox, who works at the clinics and is a member of the Union of American Physicians and Dentists. The company agreed to provide N95 masks after staffers went on a two-day strike in November.

MultiCare said it found another vendor for N95s in early December and is in the process of distributing them.

PPE has also become a rallying point for nonunion workers. At a November event handing out PPE in El Paso, Texas, more than 60 workers showed up in the first hour, said SEIU Texas President Elsa Caballero. Many were not union members, she said, but by the end of the day, dozens had signed membership cards to join.

Organized labor is not a panacea, union officials admit. Their members have faced PPE shortages and high infection rates throughout the pandemic, too. But collective action can help workers push for and achieve change, they said.

National Nurses United and the National Union of Healthcare Workers said they've each seen an influx in calls from nonmembers, but whether that results in more union elections is yet to be seen.

David Zonderman, an expert in labor history at North Carolina State University, said safety concerns like factory fires and mine collapses have often galvanized collective action in the past, as workers felt their lives were endangered. But labor laws can make it difficult to organize, he said, and many efforts to unionize are unsuccessful.

Health care employers, in particular, are known to launch aggressive and well-funded anti-union campaigns, said Rebecca Givan, a labor studies expert at Rutgers university. Still, workers might be more motivated by what they witnessed during the pandemic, she said.

"An experience like treating patients in this pandemic will change a health care worker forever," Givan said, "and will have an impact on their willingness to speak out, to go on strike and to unionize if needed."

KHN (Kaiser Health News) is a nonprofit news service covering health issues. It is an editorially independent program of KFF(Kaiser Family Foundation) that is not affiliated with Kaiser Permanente.