Accessibility links
How Soon Will The U.K. Coronavirus Variant Be Widespread In The U.S.? : Shots - Health News It appears to be 50% more infectious, and researchers predict the new coronavirus variant could start to dominate in the U.S. by March. The time to prepare is now, they say. 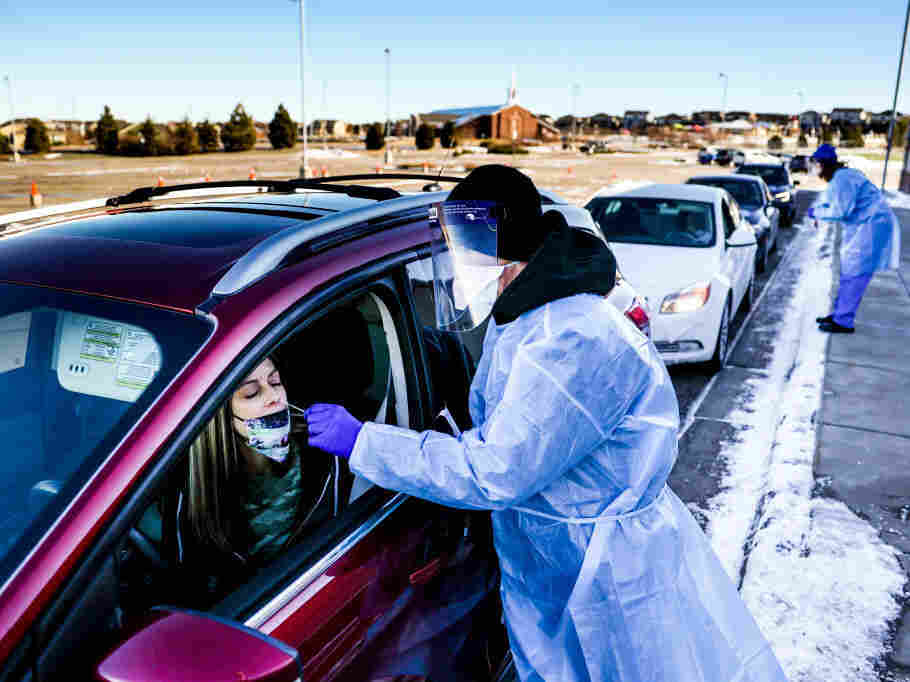 A coronavirus variant that is thought to be more contagious was detected in the United States in Elbert County, Colo., not far from this testing site in Parker, Colo. The variant has been detected in several U.S. states. Michael Ciaglo/Getty Images hide caption 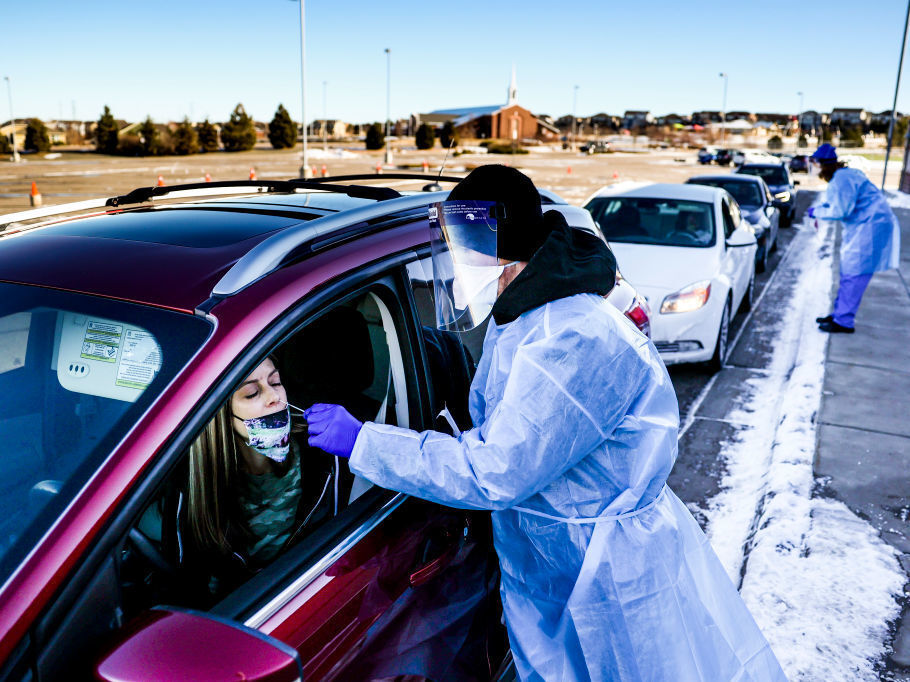 A coronavirus variant that is thought to be more contagious was detected in the United States in Elbert County, Colo., not far from this testing site in Parker, Colo. The variant has been detected in several U.S. states.

A highly contagious version of the coronavirus is rapidly spreading across the U.S., the Centers for Disease Control and Prevention reports Friday.

The country has a short window of time to curb the spread of the new variant, scientists say. If states don't act now, by issuing new restrictions, the variant --which emerged in the U.K. last fall — will likely cause a big surge in cases and hospitalization by March, the agency and other scientists warn.

"I feel a sense of déjà vu right now about the situation we were in back in the spring," says epidemiologist Emma Hodcroft at the University of Bern in Switzerland. "I think a lot of countries are looking at the U.K. right now and saying, 'Oh, isn't that too bad that it's happening there,' just like we did with Italy in February.

The new variant, called B.1.1.7, spread quickly across both the U.K. and Ireland after it emerged in England last fall. While restrictions and lockdowns largely suppressed previous versions of the virus in the U.K, they have not stopped B.1.1.7.

"We've seen in this pandemic a few times that, if the virus can happen somewhere else, it can probably happen in your country too," Hodcraft says.

Studies suggest the new variant increases transmissibility by about 50%. While restrictions have largely suppressed previous versions of the virus in the U.K., B.1.1.7 has continued to spread exponentially.

Now scientists say the virus is already in the U.S. and circulating widely — albeit at very low levels, says computational biologist Trevor Bedford at the Fred Hutchinson Cancer Research Center.

Coronavirus FAQ: How Do I Protect Myself From The U.K. Variant?

"So I roughly expect a similar timeline of three months, from the variant's initial arrival in the U.S. in December to starting to dominate the virus population around March," Bedford said.

How dangerous is the new variant?

With cases already surging in the U.S., having this new variant dominate the outbreak could be very problematic, researchers say. It could fuel another surge on top of the already staggering surge the country is struggling to stop.

Hospitals are packed and health care systems are overstretched across the country with a less transmissible version of the virus. What's going to happen if a more contagious form starts to circulate widely, even dominate the outbreak?

Right now scientists don't believe the new variant is deadlier. But its increased transmissibility could, in the end, be even more dangerous, resulting in a much higher number of deaths, says Hodcroft.

"Perhaps counterintuitively, I think that increased transmissibility is probably the worst of these two scenarios, because if something is more transmissible, then you just get it into a larger population," she says.

To understand the impact of that, remember that viruses spread exponentially. Case numbers grow faster and faster. They accelerate.

"If you then crank that exponential growth up to a steeper curve, you very quickly start infecting many, many, many more people than you would have beforehand," Hodcroft says. "And even though the percentage of people that end up in hospital or dying stays the same, a small percent of a big number is a big number."

Small increases in infectiousness cause outbreaks to grow much more rapidly — and to much larger numbers. During the fall surge, each infected person infected about 1.3 other people on average, Bedford says. Studies suggest the new variant raises this value by about 0.5, so each sick person could infect 1.8 people on average.

According to Bedford, the U.S. still has about two months to prepare for — and slow down — the variant. On the surface, that timeline sounds like good news. But the findings are worrying, Bedford says. They mean the steep rises in cases and hospitalizations that are already happening in some states can't be blamed on a more contagious virus.

"I think it's not at all really conceivable that this more transmissible variant has contributed to surging cases in the U.S. this fall and winter, " he says. "We're kind of just barely getting started with this variant."

Yet the outbreak in the U.S. is the worst it has ever been. The U.S. reported its deadliest day of the pandemic on Tuesday, with a record 4,462 people dying of COVID-19. Each week, more than 1.5 million people test positive for the virus across the country. Several states, like California, Arizona and Rhode Island, have some of the highest infection rates in the world.

The U.S. needs to be thinking about how to minimize damage from this new variant, right now, Hodcroft says. "This is our early warning. Because by the time you have something spreading exponentially in your country, it is much harder to get it under control."

What needs to be done will be different for each community. Activities that seemed relatively safe before — like outdoor dining — might not be as safe with the new version of the virus.

Communities should start thinking about acquiring better masks or suggesting to people ways they can improve their masks.

Cities and states can ramp up testing and contact tracing. They can start contact-tracing the variant to try to slow down its spread. And finally, the entire country needs to focus on vaccinating people as quickly as possible.

Otherwise, Bedford says, in March we will likely see another wave of the virus.

"I was expecting that by around March, things would be getting decently under control in the United States," he says, because the weather would warm up and more people would be immune, through the vaccine or natural exposure.

"Those factors will help bring the previous version of the virus under control," he says, but it will be tougher to stop the new variant. "My expectation now is that we end up with a spring wave of this new variant virus."