Accessibility links
Their Relationship Went Long Distance, Even Though They Live Just Miles Apart : Shots - Health News Everyone is trying to figure out how relationships work in the pandemic. That includes a couple keeping their love alive, ever since their group homes for adults with disabilities went into lockdown. 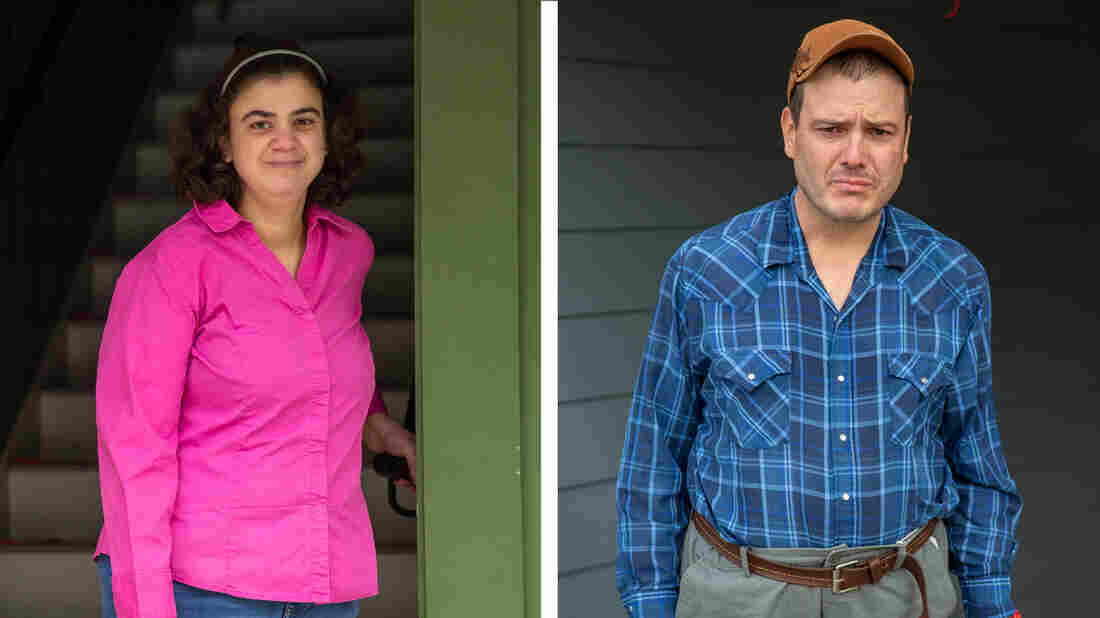 Suzan Mubarak and her boyfriend, Mitch Domier, live only a few miles apart in Bozeman, Mont., yet the pandemic has limited their ability to see each other in person. Louise Johns for KHN hide caption 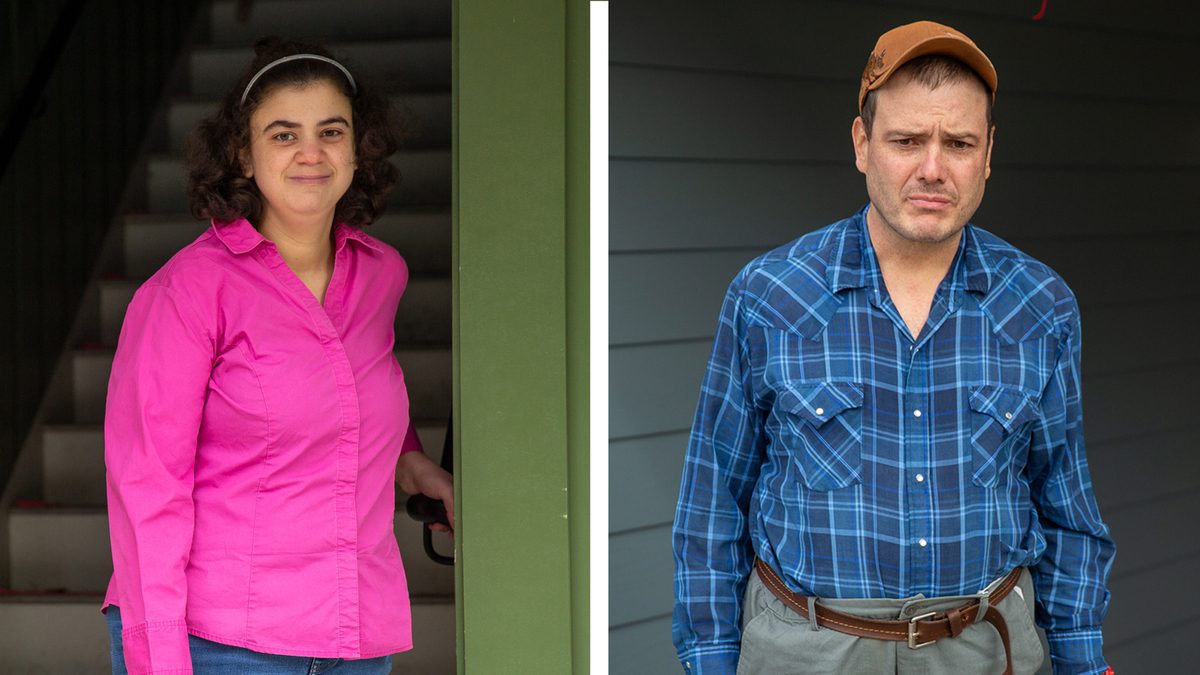 Suzan Mubarak and her boyfriend, Mitch Domier, live only a few miles apart in Bozeman, Mont., yet the pandemic has limited their ability to see each other in person.

Every Sunday afternoon, Suzan Mubarak keeps an eye on her phone. That is when her boyfriend will call to let her know he's outside her house for their weekly wave.

Mubarak, 31, and Mitch Domier, 43, live a few miles apart in Bozeman, Mont., but those drive-by visits are the closest the couple has been for nearly 10 months. The coronavirus pandemic largely locked down the homes for adults with developmental disabilities where they each live, limiting them to video chats and the occasional drive-by.

During those Sunday visits, Mubarak's eyes show she's grinning behind her mask. Domier typically leans out the passenger window of the group home's van. Domier's housemates, who like to come along for the drive, wave in the background.

If it's not too cold, Mubarak makes her way to the invisible barrier that must separate them by 6 feet. They don't talk long — that's saved for their nightly video chats, the only place they see each other's face without a mask. 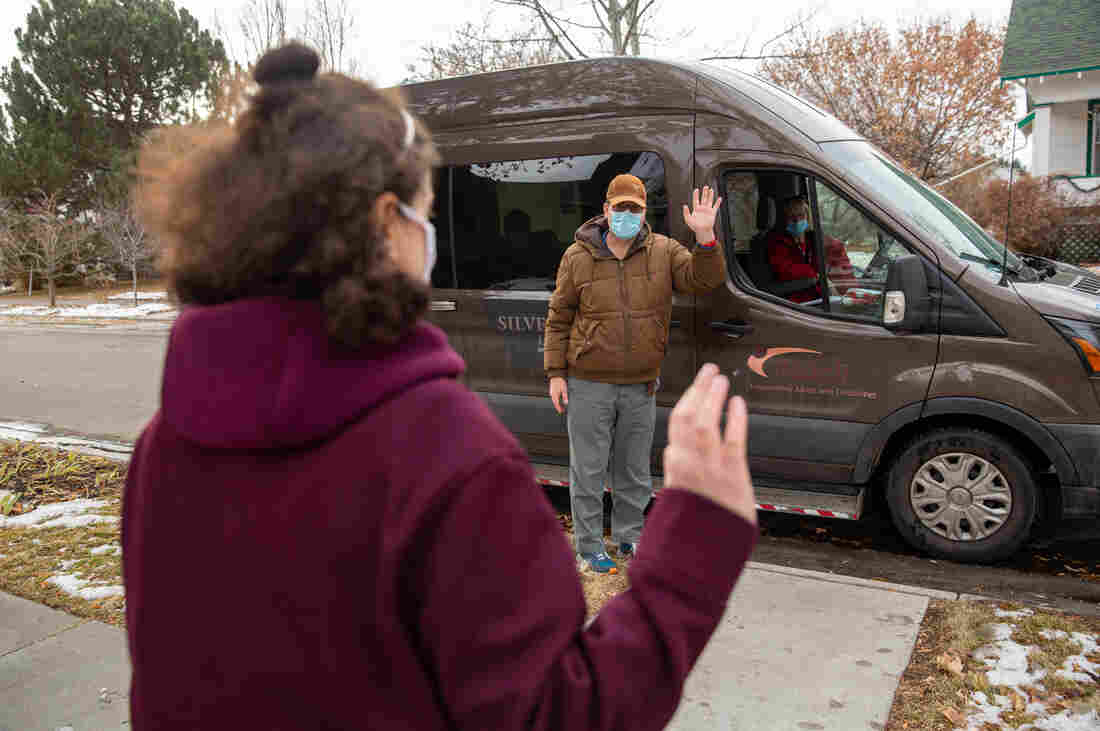 Mubarak and Domier don't talk long during their in-person visits — that's saved for their nightly video chats, the only place they see each other's face without a mask. Louise Johns for KHN hide caption 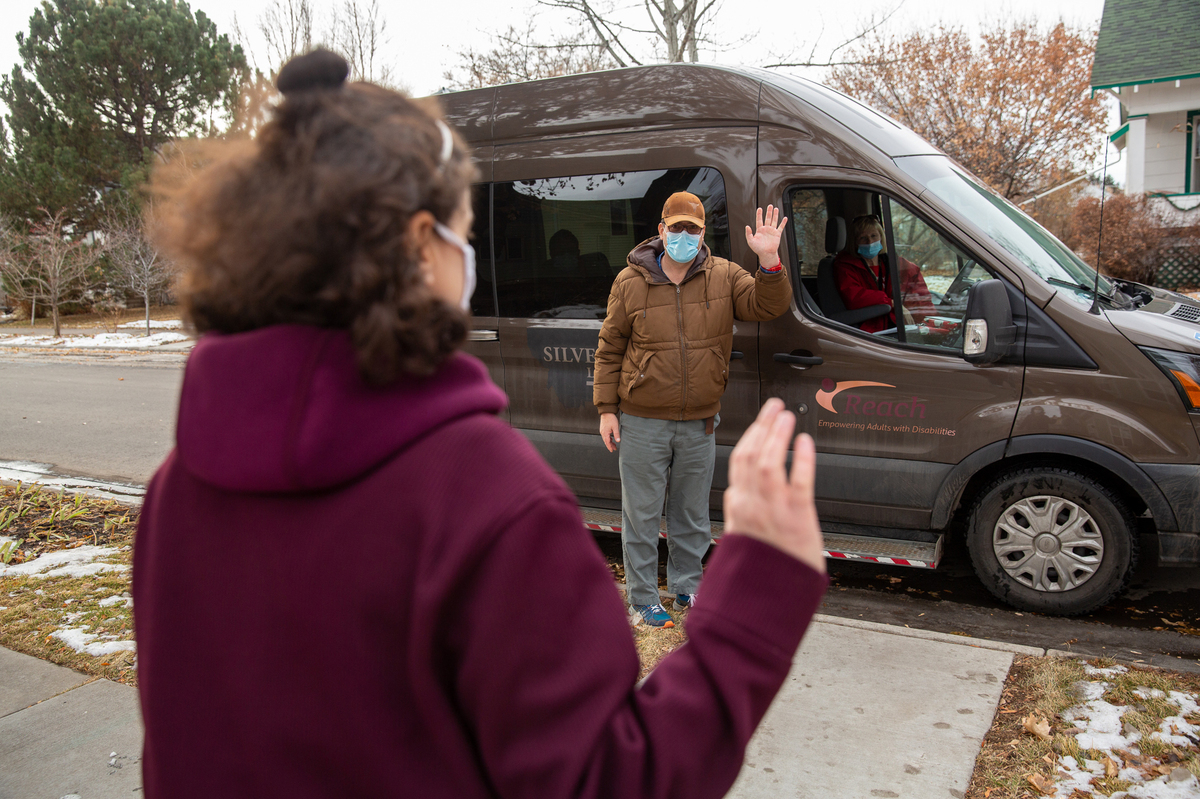 Mubarak and Domier don't talk long during their in-person visits — that's saved for their nightly video chats, the only place they see each other's face without a mask.

The couple met at their group homes' work center, a hub that offers vocational training and contract work for businesses in town. Mubarak liked that Domier teased anyone in the room, and she thought he was cute. Domier tries to keep a straight face when he makes jokes — which is often — but he has a booming laugh.

Domier noticed Mubarak right away even though she comes off as shy.

"She's nice," Domier says, adding they're also on the same page when it comes to Montana State University's football team. "She likes the Bobcats — I like the Bobcats."

They've been off and on for years, and — while both have lost track of exactly how long it has been — they think they've been steady for the past two. Now they're learning how to be in what feels like a long-distance relationship with no end date, though they are just a few miles away.

"It's hard sometimes," Mubarak says. "I miss him."

Mubarak and Domier are among the roughly 40 people who live in housing run by Reach Inc., a Bozeman nonprofit that serves adults with a range of developmental disabilities, including autism and chromosomal anomalies like Down syndrome. The nonprofit, staffed 24 hours a day, connects residents to jobs and friends in town to help them live as independently as possible. But those homes have largely been in lockdown since March. 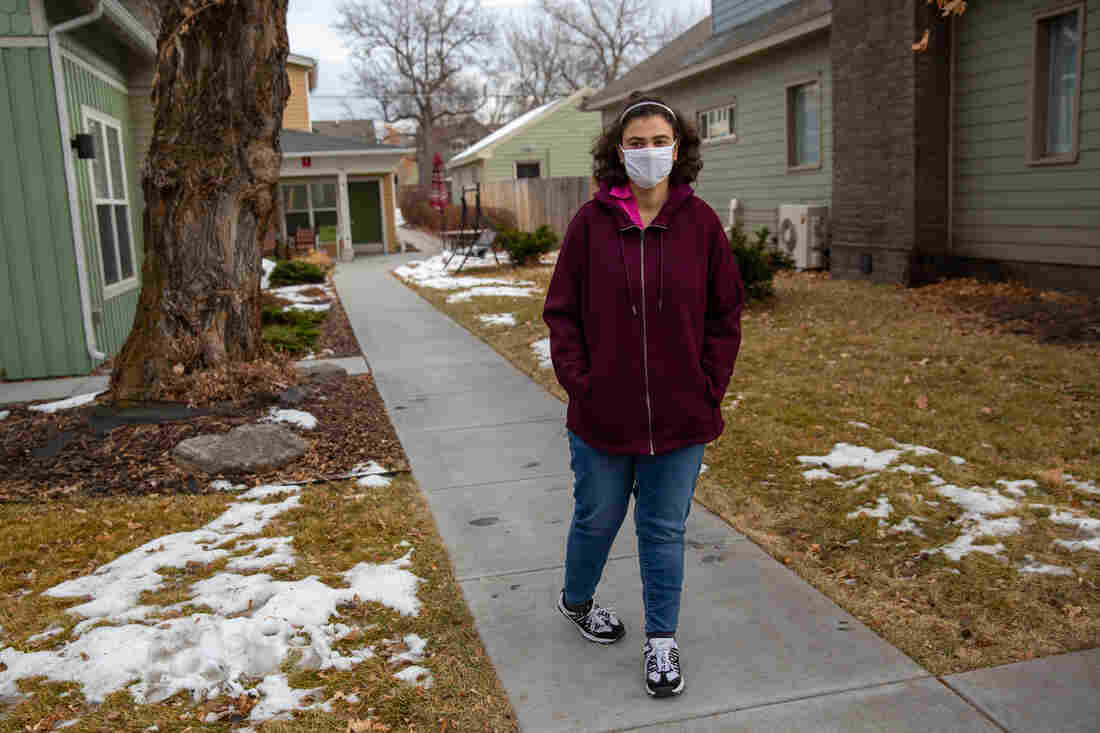 Mubarak talks to Domier during a distanced visit outside her group home. They miss the days when, pre-pandemic, Domier could visit Mubarak after work and sit on her front porch to talk. Louise Johns for KHN hide caption 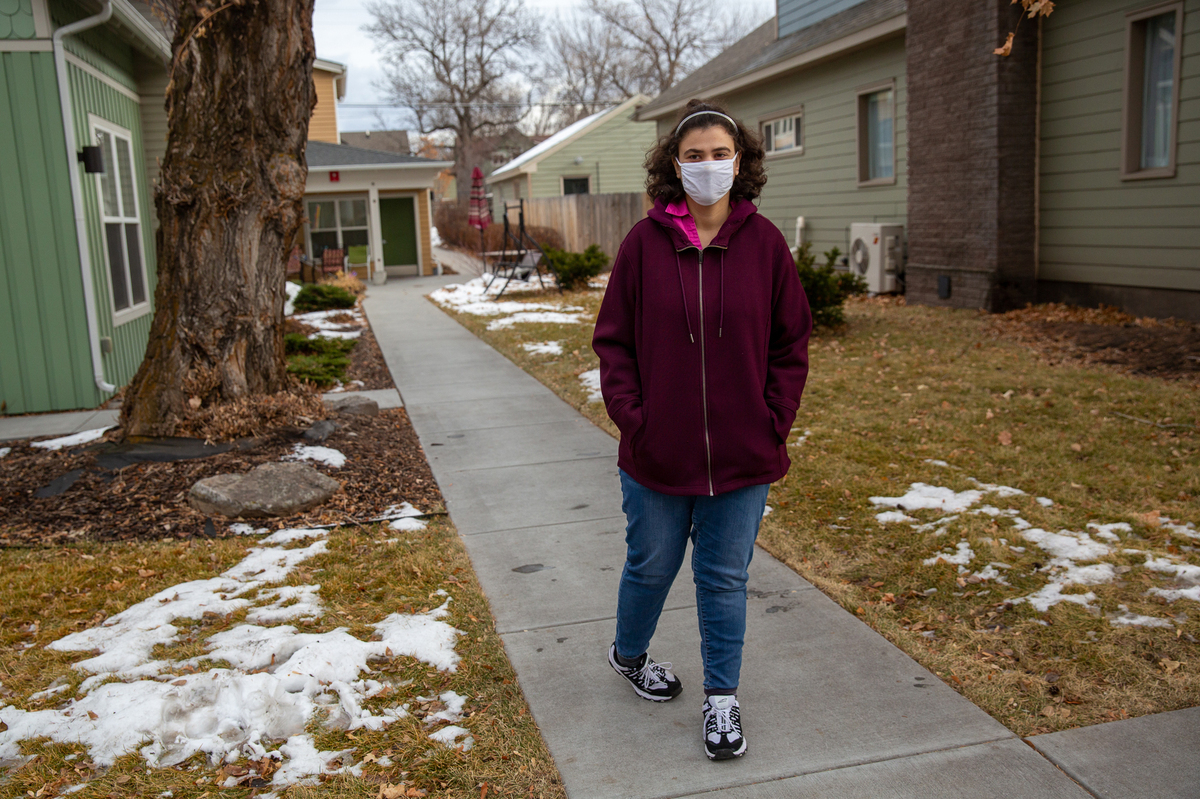 Mubarak talks to Domier during a distanced visit outside her group home. They miss the days when, pre-pandemic, Domier could visit Mubarak after work and sit on her front porch to talk. 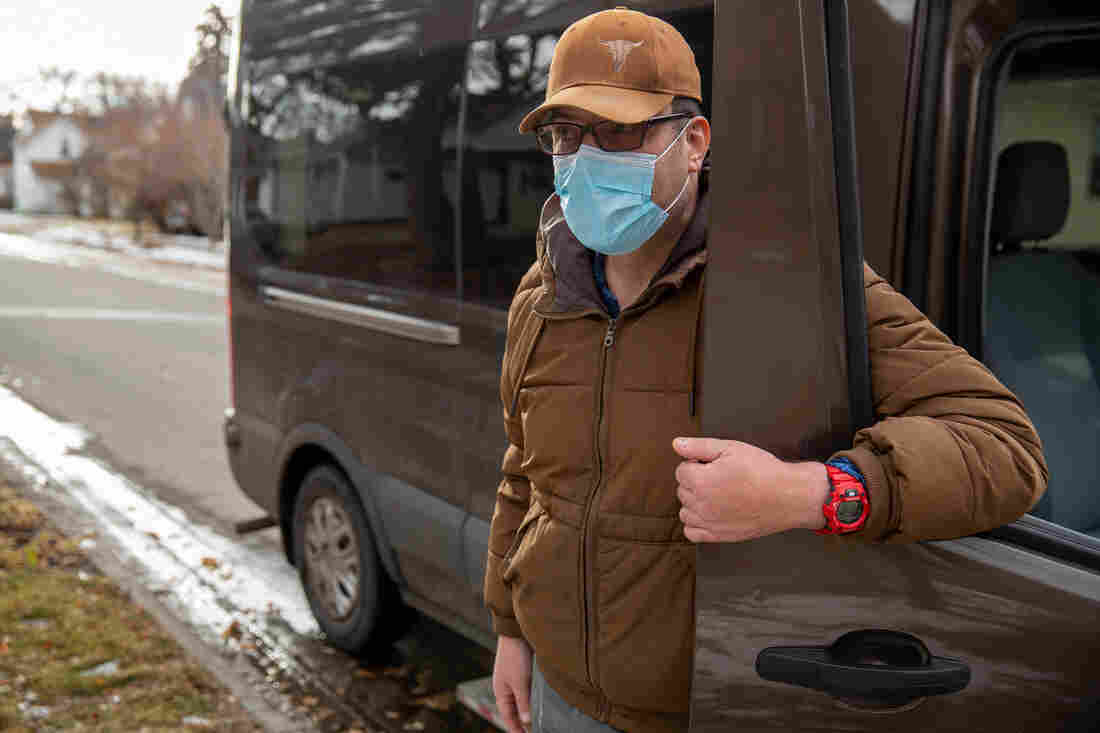 Domier says the adjustment to pandemic life has been relatively easy. He likes routine and has adjusted his life to work from the group home where he lives with roommates. Louise Johns for KHN hide caption

No weekend trips to see parents or to hang out at the senior center. Visits are limited to a room divided by plexiglass or, for those willing, video chats. Long-held jobs at diners, hotels and shops have been replaced by contract work done at home, such as cleaning out test tubes. The only people allowed in the homes are staffers, and even they must keep their distance.

Many residents have settled into their new routines. But Dee Metrick, Reach's executive director, says some don't understand why their worlds have shrunk. A few still get frustrated when they can't give high-fives to the aides who rotate through their homes. The isolation has intensified some residents' long-existing anxiety. One Reach client who's particularly scared of the coronavirus gets mad every time someone passes by their home without a mask.

"Everything just came to a screeching halt," Metrick says. "They have a lot more support than some people in the world right now, but our clients can feel a bit invisible and lost. Sometimes it's harder for clients' family members. There are parents who haven't seen their kid since March who just want to hug them and know they're OK."

Early research has shown that people with intellectual and developmental disabilities are three times more likely to die if they contract the virus than those without such disabilities. Some can't avoid coming into close contact with aides. And group housing can spawn fast-moving outbreaks.

"I hope we can beat the odds," Metrick says. "We have one house that, if people in that house get sick, there's a good chance most of them are going to end up in the hospital."

As of Dec. 29, 160 of Montana's at least 870 adults living in disability care settings had been diagnosed with COVID-19, and five had died. No national tally exists of how many people in such facilities have gotten sick.

Domier gets why his world has changed. He follows Montana's COVID-19 numbers by watching the news.

"Cases keep going up and down and up," Domier says. "If people wear their mask, it would be OK."

For Domier, the adjustment has been relatively easy. He likes routine and has created one that works for now.

Domier used to clean and organize shelves at Goodwill and worked a few days each week in the center where he met Mubarak. Now he works at his kitchen counter, bagging screws and washers like those needed for self-assembled furniture. He and his roommates sometimes dump liquid out of test tubes, but he says that's not his favorite task because the tubes stink.

Still, he likes being able to work from home, where it's quiet and he gets to take turns picking radio stations.

With extra time at home, Domier runs on a treadmill most days after work. He puts on his headphones and blasts Garth Brooks. He's within pounds of hitting the 200-pound goal his doctor set for him.

Before the pandemic, his mom would typically visit once a month to go shopping and out for dinner. Now Domier calls her every Sunday evening to talk about the past week, a conversation that lasts hours.

Car rides are now his main freedom from home. Domier and his roommates have their driver circle Montana State University's football stadium. It's one of the first years in many he hasn't been to a game. Fast-food drive-throughs are another favorite. When Domier gets his pick, they go to McDonald's, where he orders a Dr Pepper and an apple pie.

"Sometimes we go to the airport and drive around," Domier says. "Seeing airplanes coming in, land and take off."

And, of course, on Sundays they drive past Mubarak's place. When those visits don't happen because of quarantines or bad weather, Domier doesn't mind just having their video chat instead.

But they miss the days when Domier would visit Mubarak and sit on her front porch to talk, and they miss their overlapping shifts at the work center. They miss cheering for each other when both competed in track and swimming in the Special Olympics. 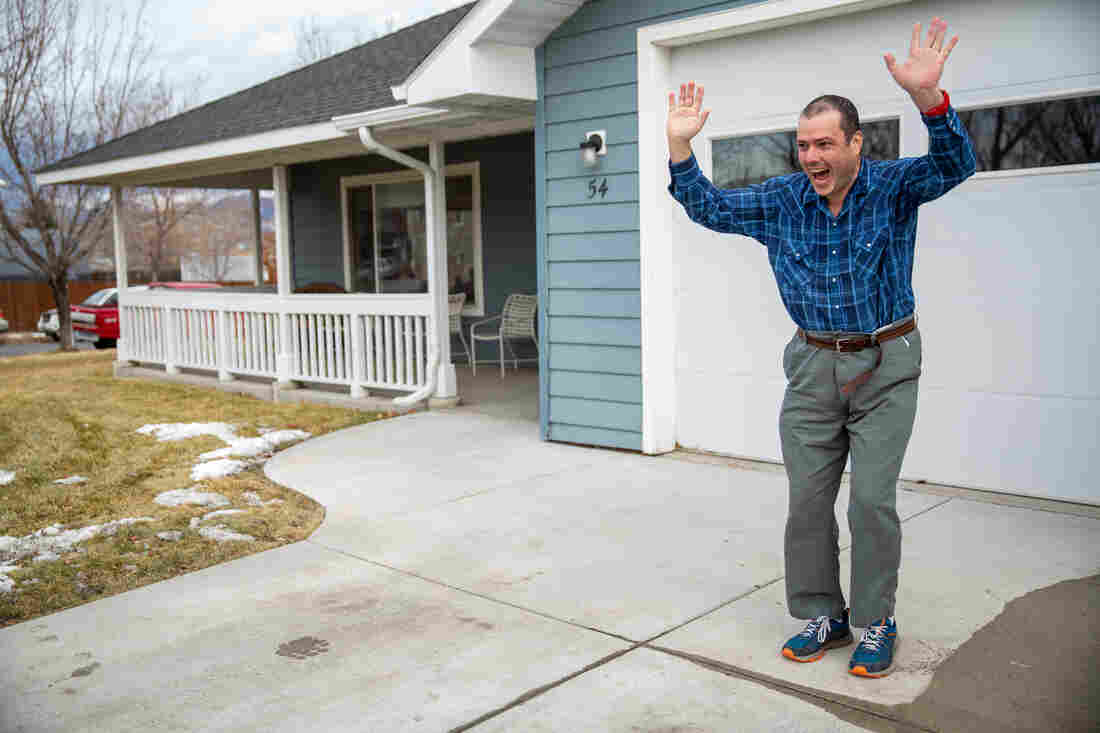 Domier waves to other residents of his group home as they leave the driveway. Louise Johns for KHN hide caption 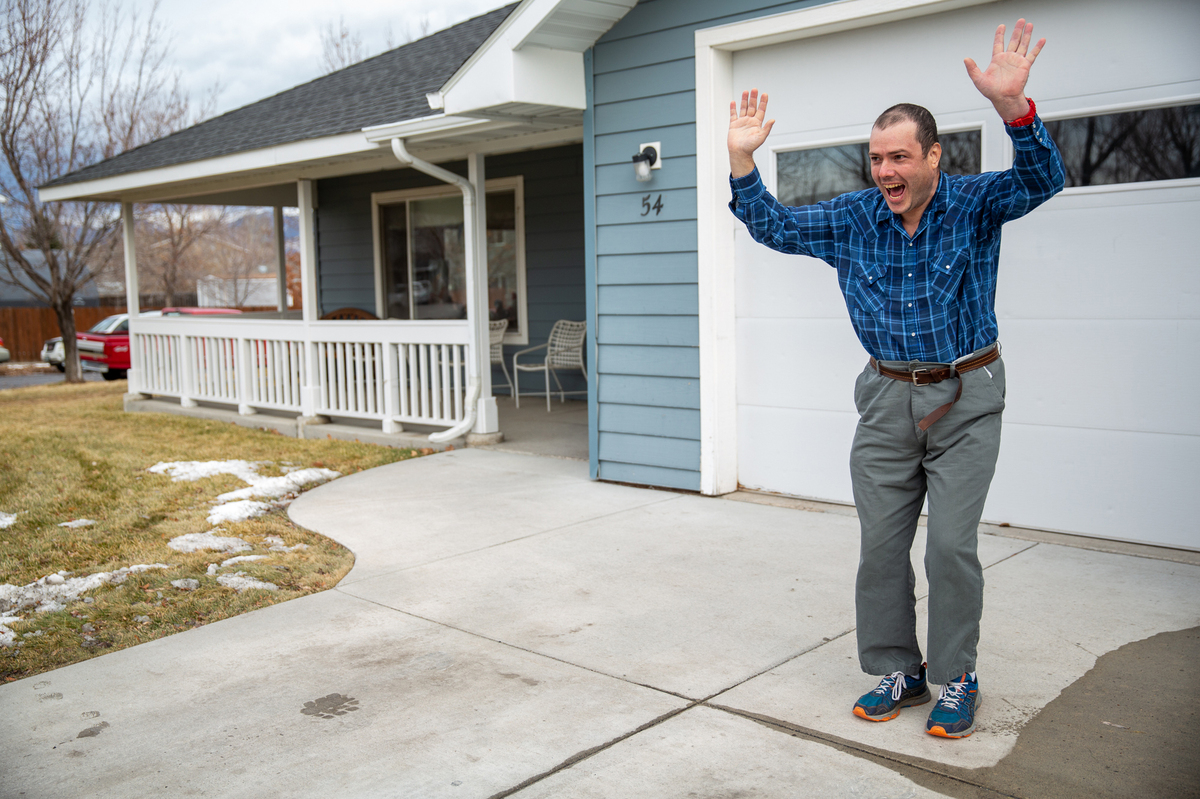 Domier waves to other residents of his group home as they leave the driveway.

Mubarak's favorite part of her days is still her work. Like Domier, she's often sorting parts. She wants to get back to her job cleaning rooms in a downtown Bozeman hotel; it was a place to meet new people. She misses her friends.

This summer, she spent a lot of time drawing pictures of her friends in sidewalk chalk and caring for her patio flowers. Winter means finding other ways to relax.

If it's a hard day, she talks with Jenna Barlindhaug, an aide who works in her home.

"She teases me about my boyfriend every day," Mubarak said, smiling, on a video call while Barlindhaug sat at a distance, both in masks.

Barlindhaug laughed and said they take turns teasing each other. "There are some tough days when people are in tears," Barlindhaug said. "We really have to think of ways to cheer each other up."

When the nonprofit's annual December banquet moved online, Mubarak missed having Domier as her date. But she and her roommates still wore the dresses they had picked out months before, and Barlindhaug did everyone's hair. They had burgers and cheesecake delivered and watched a photo slideshow of Reach residents' lives over the past year.

Domier and Mubarak know they'll likely get two shots in their arms to protect them from COVID-19 before life can return to something closer to normal — and they can attend the banquet together again. Some of the nonprofit's workers have received the vaccines. But many other Montanans are also in line for those scarce doses, and so far it's uncertain when group home residents will have access to the shots.

Until then, there's always Sunday.