Accessibility links
New Parents Hit With Huge Surprise Medical Bill Because Of The 'Birthday Rule' : Shots - Health News An insurance regulation known as "the birthday rule" is tripping up couples who are putting their newborn children on the wrong policy and risk losing thousands of dollars. 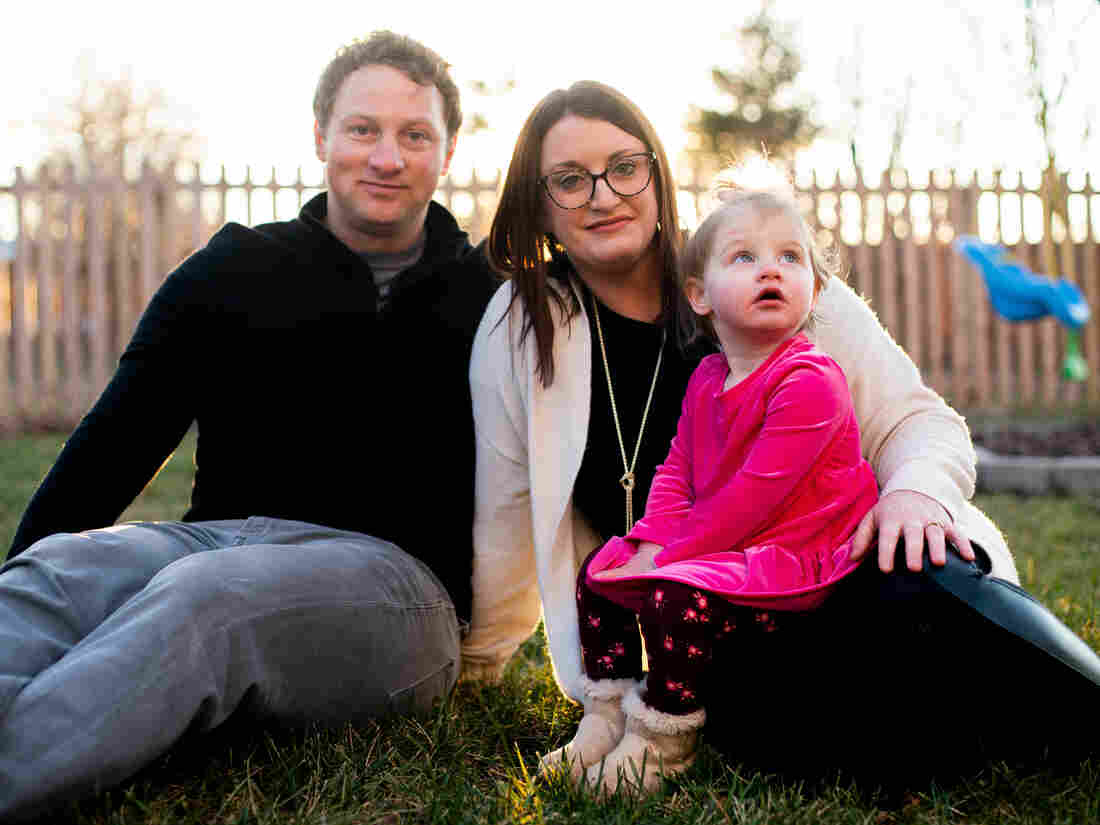 Mikkel and Kayla Kjelshus' daughter, Charlie, had a complication during delivery that caused her oxygen levels to drop and put her at risk for brain damage. Charlie needed seven days of neonatal intensive care, which resulted in a huge bill — $207,455 for the NICU alone — and confusion over which parent's insurer would cover the little girl's health costs. Christopher Smith for KHN hide caption 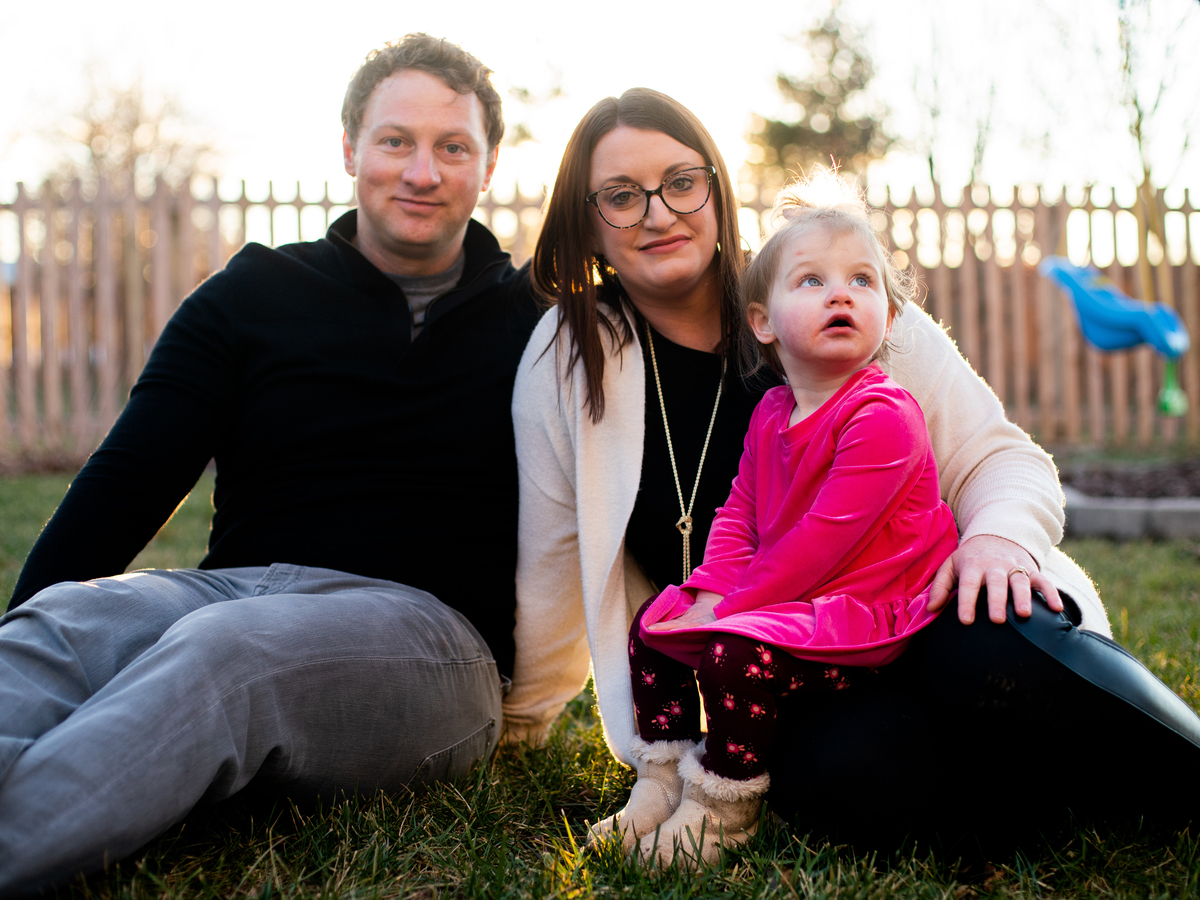 Mikkel and Kayla Kjelshus' daughter, Charlie, had a complication during delivery that caused her oxygen levels to drop and put her at risk for brain damage. Charlie needed seven days of neonatal intensive care, which resulted in a huge bill — $207,455 for the NICU alone — and confusion over which parent's insurer would cover the little girl's health costs.

In the nine months leading up to her due date, Kayla Kjelshus and her husband, Mikkel, meticulously planned for their daughter's arrival.

Their long to-do list included mapping out their family's health insurance plan and registering for baby gear and supplies. They even nailed down child care ahead of her birth.

"We put a deposit down to hold a spot at a local day care following our first ultrasound," says Kayla Kjelshus, of Olathe, Kan.

The first-time parents felt ready for their daughter's debut on Feb. 15, 2019. But one of the happiest days of their lives turned out to be one of the scariest. Their daughter, Charlie, had a complication during delivery that caused her oxygen levels to drop and put her at risk for brain damage.

"We had a waiting room filled with family and friends," Mikkel recalls. "To come out and say things aren't well ... it was really hard."

Charlie was transferred from Saint Luke's Community Hospital to HCA Overland Park Regional Medical Center, where she received treatment in the neonatal intensive care unit, known as the NICU, for the next seven days.

Doctors sent Charlie home with a positive prognosis. The couple had decided that Kayla, a nurse practitioner, would carry Charlie on her insurance plan through Blue Cross and Blue Shield of Kansas City. Her plan offered better rates than Mikkel's, and his plan was based in another state and carried a higher deductible. So when the hospital asked for insurance information, Kayla provided her policy number — Mikkel did not.

They expected things to work out fine between the insurance company and the hospitals.

The Patient: Charlie Kjelshus, an infant covered by her mother's plan through Blue Cross and Blue Shield of Kansas City and, eventually, her father's plan, CommunityCare of Oklahoma

Medical Service: Whole body cooling and other treatment in the NICU to prevent brain injury that may result from oxygen deprivation during birth

Total Bill: Multiple charges totaling $270,951, according to Mikkel Kjelshus, including a charge of $207,455 for the NICU stay

What Gives: Kayla Kjelshus filed a claim with Blue KC, and the insurer started paying for baby Charlie's care. But then it canceled payments to the HCA Overland Park hospital, St. Luke's Community Hospital and Charlie's neurologist, pediatrician and other physicians.

What was going on?

The Kjelshus family had slammed into something well known among insurance experts but little understood by the general public. "Coordination of benefits" and "the birthday rule" are the jargon terms for the red tape that snared them.

When a child is born into a family in which both parents have insurance through their jobs, the parents are supposed to "coordinate benefits'' — meaning they must tell both insurers that their child is eligible for coverage under two plans. The parents might be forgiven for thinking they have some say in how their child will be insured. In most cases, they don't.

Instead, a child with double health insurance eligibility must take as primary coverage the plan of the parent whose birthday comes first in the calendar year; the other parent's insurance is considered secondary. This model regulation was set by the National Association of Insurance Commissioners and adopted by most states, including Kansas, says Lee Modesitt, director of government affairs with the Kansas Insurance Department.

For Charlie Kjelshus, the birthday rule meant her dad's plan — with a $12,000 deductible, high coinsurance obligation and a network focused in a different state — was primary. Her mom's more generous plan was secondary.

Mom Kayla says Blue KC dispatched an investigator to discover that dad Mikkel had insurance through his job. The family had not been trying to hide Mikkel's coverage; they merely weren't aware of the birthday rule and that they may be subject to state laws that ensure babies are covered for the first 31 days of life.

After Blue KC informed Mikkel that his insurance had to serve as primary coverage, CommunityCare of Oklahoma did pay Charlie's bills to the hospitals and other providers. It paid HCA Overland Park $16,605 on the $207,455 NICU charge. The insurer said its negotiated rate on the bill was $35,721. With Mikkel's deductible and coinsurance, that left the family on the hook for more than $19,116, it seemed.

"When an insurance company finds out that a baby is in the NICU, then it's a red flag," Burke says. "They are going to look for ways to cut their losses."

Resolution: The couple turned to the Kansas Department of Insurance to file a complaint about the bill, but the department declined to help because Kayla's policy is self-funded by her employer, which means the company is subject to federal rather than state regulations.

After close to a year and a half of going back and forth with their insurance companies and the hospitals, Blue KC paid $19,116 of the Kjelshuses' bill as a secondary insurer and said the Kjelshuses should not be responsible for what HCA Overland Park said was a remaining balance of $7,504.51. But the family kept getting bills.

And, beginning in summer 2020, collections calls from the hospital rolled in daily, leaving the couple frustrated and confused.

Eventually, after a human resources officer at Kayla's job stepped in to help, they received a statement with a zero balance. Their own calls to HCA Overland Park hospital billing department didn't get them anywhere.

"We always got a different answer," Kayla says. "It was so frustrating."

A spokesperson for the hospital apologized for the deluge of calls from collections.

"We made an administrative error and an automated billing call system for payment occurred, causing the family undue frustration during an already stressful time, and we apologize," the hospital wrote in a statement. "Once the issue was identified and resolved, the insurance companies processed the claim and we informed the family that there is a zero balance on the account. Again, we are sorry for the stress and inconvenience, and wish them well."

In a statement, Blue KC acknowledged that coordination of benefits can be confusing for members and that the company follows rules of state and federal regulators, modeled on standards set by the NAIC. It said that the Kjelshuses' future claims would continue to be paid and that a "dedicated service consultant" would continue to work with Kayla Kjelshus.

In the end, the insurers and hospitals settled Charlie's bill as they were supposed to: The primary insurer paid first, and the secondary paid what had not been covered by the first. But it took more than a year of phone calls, appeals and complaints before the Kjelshus family had the matter settled. Charlie turns 2 next month. For Charlie Kjelshus, "the birthday rule" meant that dad Mikkel's plan ― with a $12,000 deductible, high coinsurance obligation and a network focused in another state ― was deemed her primary coverage after her NICU stay as a newborn. Mom Kayla's more generous plan was considered secondary coverage. Christopher Smith for KHN hide caption 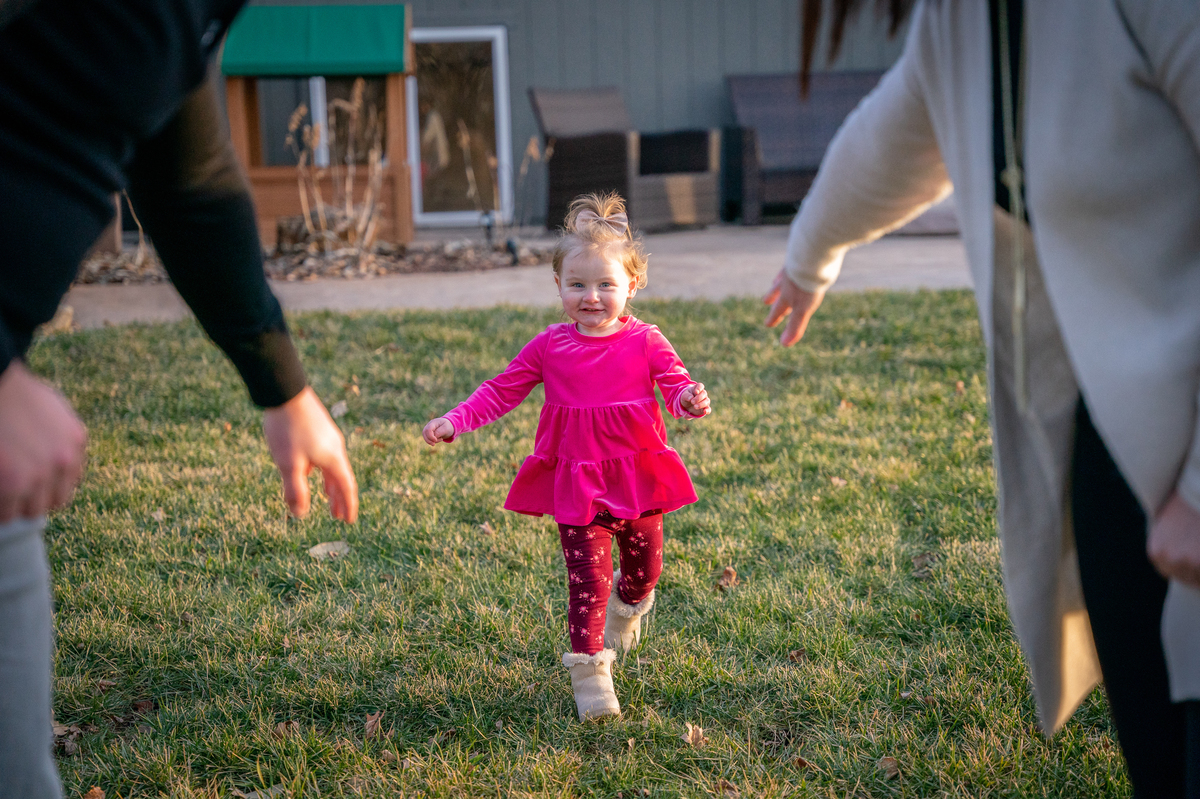 For Charlie Kjelshus, "the birthday rule" meant that dad Mikkel's plan ― with a $12,000 deductible, high coinsurance obligation and a network focused in another state ― was deemed her primary coverage after her NICU stay as a newborn. Mom Kayla's more generous plan was considered secondary coverage.

The Takeaway: In theory, "the birthday rule" would be a fair, if random, way to figure out which insurance should be primary and which secondary for families with insurance from two employers. The presumption is that the premiums, deductibles and networks are roughly similar in both parents' insurance plans — but that's simply not the case for many families.

The Kjelshuses found out the hard way they didn't have a choice about which parent's insurance was primary. They might have avoided their quagmire if Mikkel had dropped his own coverage and gotten onto Kayla's plan before Charlie was born.

It's not clear whose responsibility it is to help families navigate these rules before a baby is born. It's even more complicated for parents who are divorced or never married. Insurance companies don't always offer the critical information families need about the coordination of benefits.

"Expecting parents should try to get in touch with their health plan before the baby is born to find out about the coverage rules," says Karen Pollitz, a senior fellow at KFF, the Kaiser Family Foundation. (KHN is an editorially independent program of KFF.)

New parents should "also figure out if they want to switch the entire family onto one plan once the baby is born."

It's also a good idea to speak to human resources representatives at both parents' jobs. The birth of a baby is considered "a qualifying event" for insurance coverage in all group health plans, so families can make decisions about changing coverage at that time. Otherwise, families might have to wait for open enrollment to make coverage changes.

"It is ridiculous to me my wife and I faced so many issues since both parents have health insurance," Mikkel Kjelshus says. His daughter, Charlie, now is covered only by his wife's plan.

Bill of the Month is a crowdsourced investigation by KHN and NPR that dissects and explains medical bills. Do you have an interesting medical bill you want to share with us? Tell us about it!