Accessibility links
Could Latte Logistics Help Speed Up The Pace Of Vaccination? : Shots - Health News Large corporations such as Starbucks, Honeywell, Microsoft, Costco and Google want to help states with planning and logistics. But the potential of these partnerships is hindered by supply problems.

As States Hustle To Distribute Vaccines, Big Business Offers A Boost Of Expertise

As States Hustle To Distribute Vaccines, Big Business Offers A Boost Of Expertise 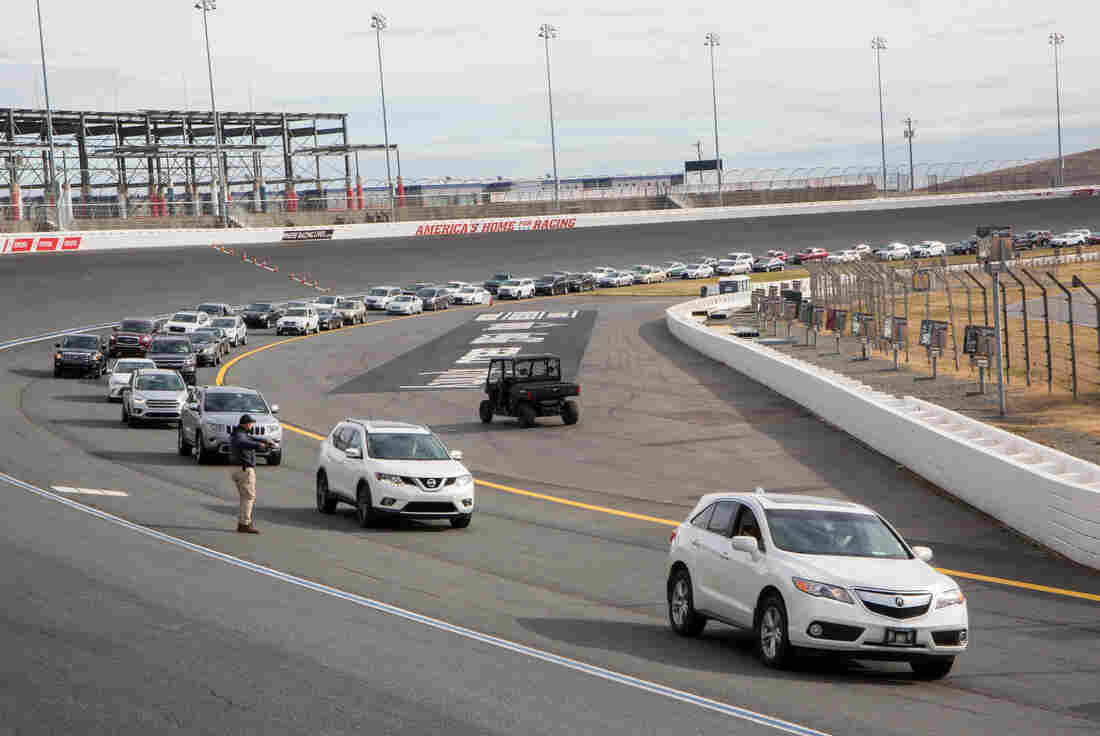 A line forms around the racing oval at Charlotte Motor Speedway as people await the opportunity to receive their COVID-19 vaccination during a mass event held at the speedway. Kevin McCarthy/Atrium Health hide caption 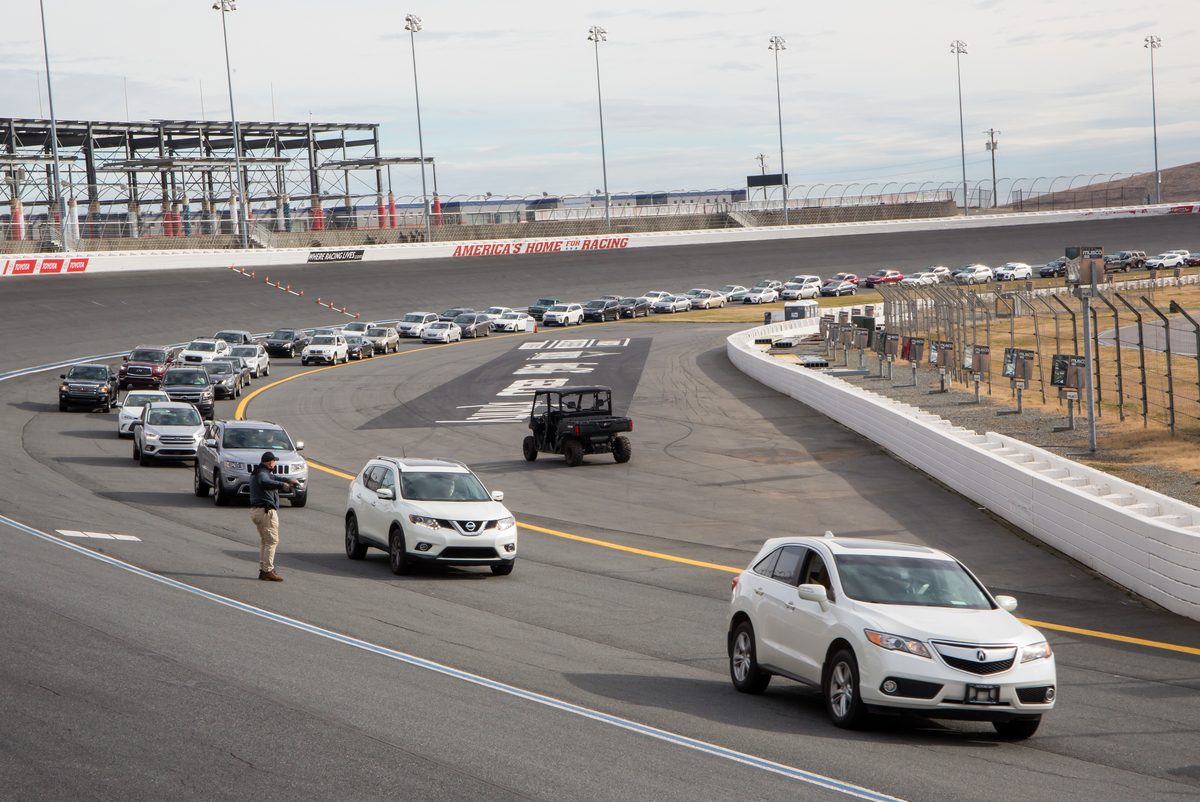 A line forms around the racing oval at Charlotte Motor Speedway as people await the opportunity to receive their COVID-19 vaccination during a mass event held at the speedway.

As the Biden administration rolls out its own plans to fight the pandemic, states have struggled to distribute the vaccine to larger groups of newly-eligible Americans. Some governors are trying to scale up their vaccine operations — and smooth out the logistical kinks — with the help of the private sector.

In Washington state, Starbucks, Microsoft and Costco are lending expertise and manpower to public health agencies that are trying to dispatch their doses of vaccines more efficiently.

In North Carolina, Honeywell and other local businesses worked with the state to organize a mass vaccination event at the Charlotte Motor Speedway. Thousands of people got their shots over the weekend at the racetrack.

And Google pledged $150 million to "promote vaccine education and equitable distribution" and to help people find "when and where to get the vaccine."

This backup from businesses comes as states continue to navigate uncertainty around when they'll receive doses. A patchwork of vaccination eligibility rules, and myriad ways to sign up for a shot, have left many Americans confused, frustrated and even frightened, as those at high risk of serious complications from the virus continue to wait.

Washington Gov. Jay Inslee calls private enterprise the "arsenal" of the coronavirus vaccination campaign, comparing the partnership to the production of battleships during World War II. But even Inslee, a Democrat, was careful not to oversell the immediate impact of these public-private partnerships.

"This is not going to be an expectation of an Amazon delivery system," Inslee said while announcing his state's plan last week. "There will be times when people will not have dosages available in their community because there isn't enough being delivered." Kevin Johnson, Starbucks chief executive officer, tours a mock vaccination site in the innovation lab at Starbucks headquarters in Seattle on Jan. 18, 2021. Starbucks — along with Microsoft and Kaiser Permanente — is working with Washington health officials to coordinate the distribution of COVID-19 vaccines across the state. Joshua Trujillo/Starbucks hide caption 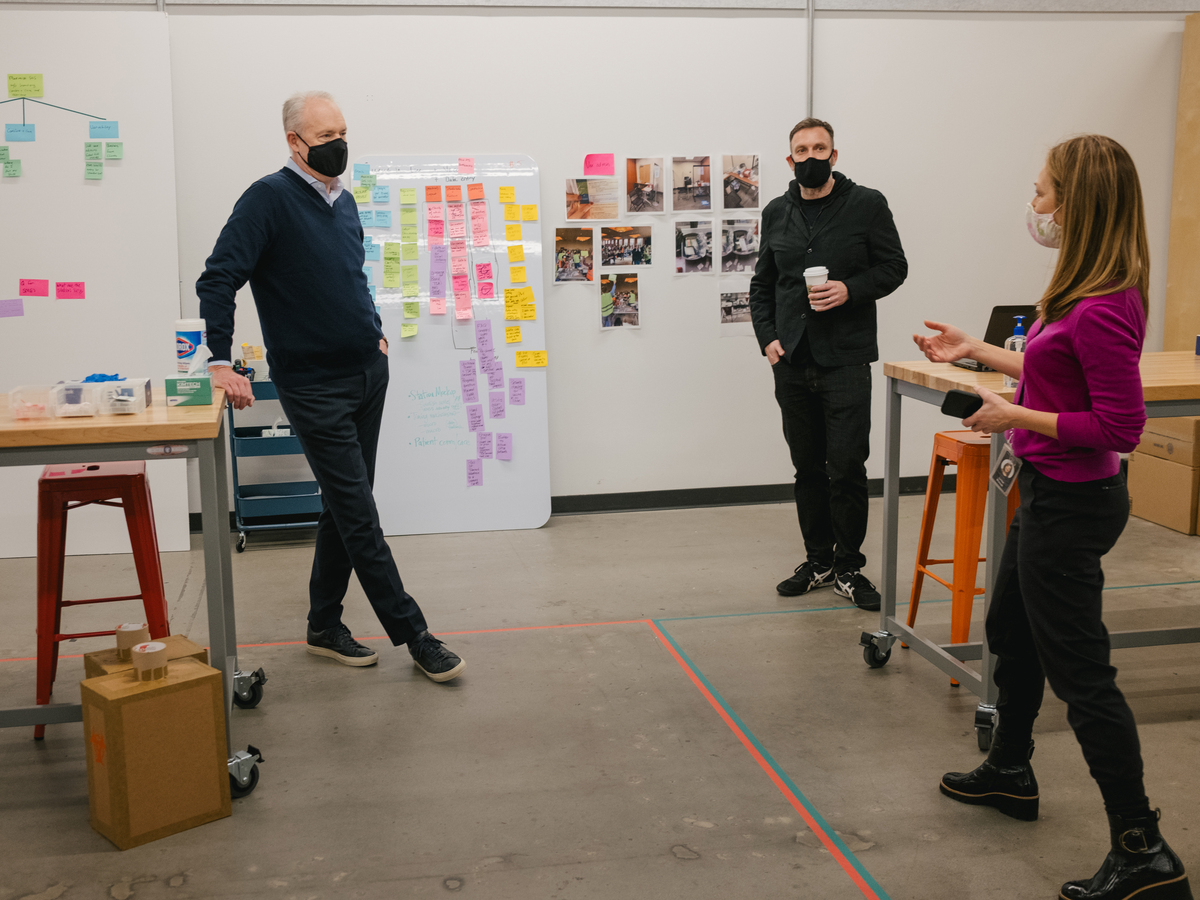 Kevin Johnson, Starbucks chief executive officer, tours a mock vaccination site in the innovation lab at Starbucks headquarters in Seattle on Jan. 18, 2021. Starbucks — along with Microsoft and Kaiser Permanente — is working with Washington health officials to coordinate the distribution of COVID-19 vaccines across the state.

Washington and more than half of all states have opened up vaccines to anyone 65 and older — greatly spiking demand — yet there are still major problems when it comes to actually using all the delivered vaccines.

Of the approximately 48 million vaccines delivered to states, more than 26 million have not yet been given, according to data from the Centers for Disease Control and Prevention.

"It's a dance that requires a lot of complex choreography," says Alison Buttenheim, an Associate Professor of Nursing and Health Policy at the University of Pennsylvania.

"We aren't always so innovative and nimble in public health and this is the moment where we need that — we need innovation and we need states trying different things."

In Washington state, the companies and state officials have formed the Washington State Vaccine Command and Coordination Center. Retail experts and engineers from Starbucks are focusing on streamlining operations at vaccine clinics, to help people move through quickly and thereby cut down on wait times. Microsoft is providing technology support and space on its campus, and Costco is helping manage logistics around the delivery of the shots.

Every state should be looking to its businesses to fill gaps in the vaccination operations, whether that involves online scheduling, public messaging, or the nitty-gritty details of coordinating delivery and clinics, Buttenheim says.

"There's no one corporate entity that's going to solve this, but most have something to offer," she says.

Starbucks opened an innovation lab called the Tryer Center at its headquarters in 2018, to provide a place to experiment and tinker with new products and retail ideas. Earlier in the pandemic, the company used the lab to test contactless service and curbside delivery. 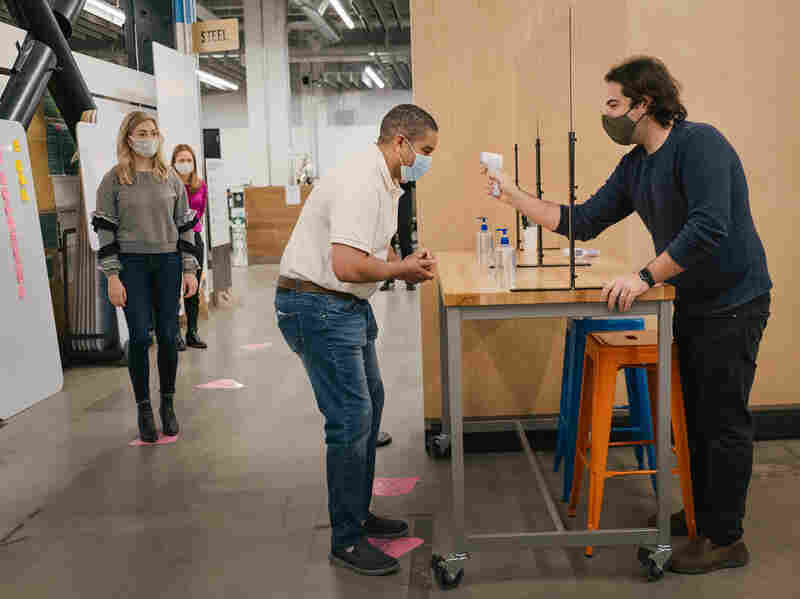 Starbucks employees take part in a simulation at a mock vaccination site in the Tryer innovation lab at Starbucks headquarters in Seattle on January 18, 2021. Starbucks is helping Washington state officials design and set up vaccination clinics across the state, with help from Microsoft and Kaiser Permanente. Joshua Trujillo/Joshua Trujillo/Starbucks hide caption 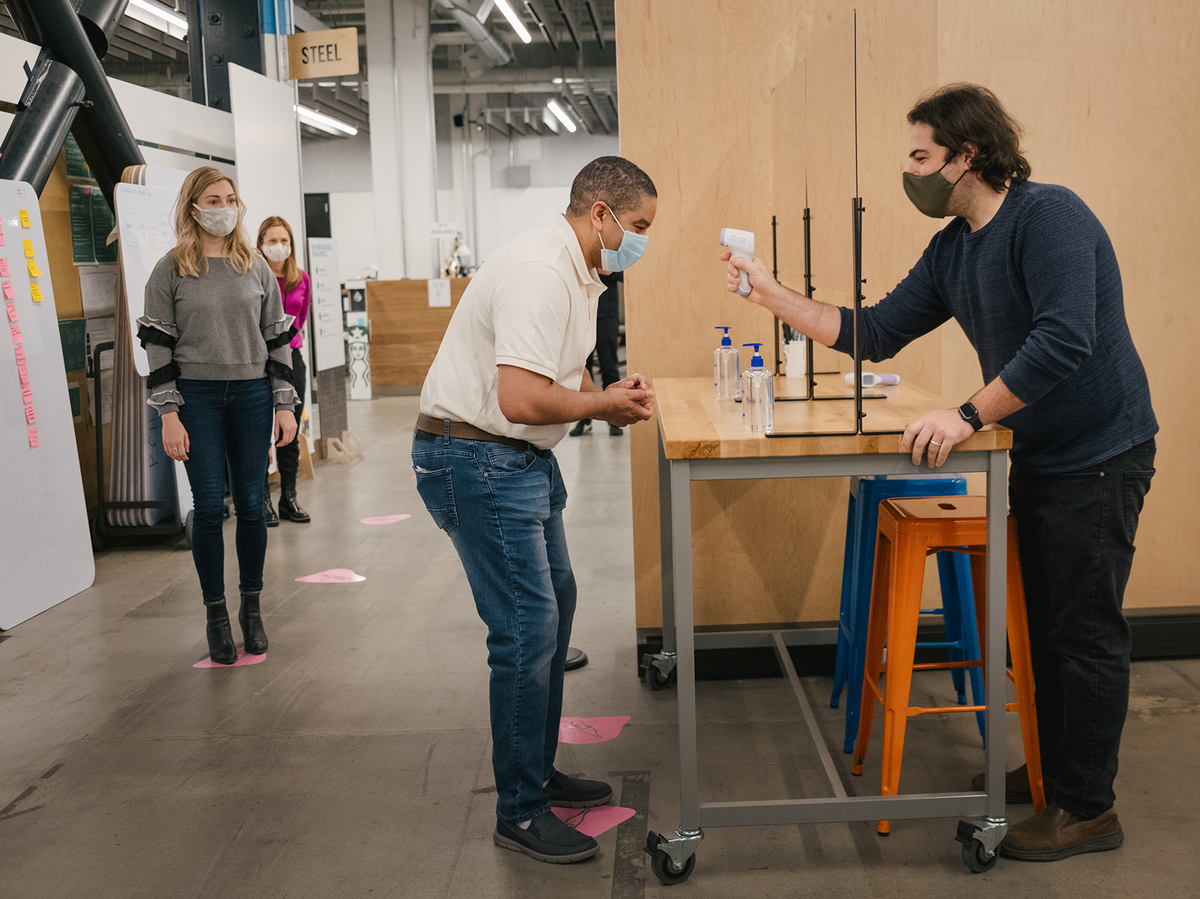 Starbucks employees take part in a simulation at a mock vaccination site in the Tryer innovation lab at Starbucks headquarters in Seattle on January 18, 2021. Starbucks is helping Washington state officials design and set up vaccination clinics across the state, with help from Microsoft and Kaiser Permanente.

Now, staffers from the Tryer Center are hoping to use their expertise in retail operations, customer service and logistics to make vaccination more efficient. Some of them visited existing vaccine sites to observe the process and talked with health care workers to learn about potential "bottlenecks."

So far, the Starbucks team has learned that using symbols on signs may help alleviate some of the need for translation. Another idea is to create two lines at the check-in station: a "fast line" for those who just need to be registered, and a "slow line" for people who have questions and want more interaction. The Tryer Center team is developing three different models for Washington state to use: vaccination clinics, drive-through clinics and mobile pop-ups to reach people in rural or underserved areas.

"It has been challenging to scale those kinds of things up," he says. "Then you add in that public health departments have been dealing with COVID for a year, with limited resources, and people are tired."

In North Carolina, Atrium Health, a non-profit health care system, is part of the business partnership with Honeywell, which aims to give one million shots by July.

"It allows us as the health care system to focus on what we do best — getting the shots in the arms and making sure people are tolerating it, and the aftercare," says Dr. Scott Rissmiller, Atrium's executive vice president.

"Our hospitals are full, and it's the same people that are working in our hospitals that we are needing to redeploy for the vaccines."

'This isn't just handing somebody a package'

The Biden administration has pledged more transparency around the availability of doses and has enlisted the Federal Emergency Management Agency to set up mass vaccination sites, as many as 100 in the next month.

While the pace of vaccination has picked up, public health experts warn the U.S. must move faster as new, more contagious variants of the virus are detected in a growing number of states and threaten to drive another devastating surge.

A federal partnership with large pharmacy chains has faced criticism for not moving more quickly to vaccinate inside nursing homes. At the state level, the pace of distribution varies: some states have gone through the majority of their doses, while others have used less than half of what's been delivered.

Public health can get a boost from the private sector, but there are limits to what can be outsourced, says epidemiologist Jennifer Nuzzo of Johns Hopkins University.

"This isn't just handing somebody a package, this is a clinical encounter," says Nuzzo.

Data entry involves sensitive personal information and the actual vaccinators need to be trained and credentialed.

Nuzzo, who has studied the U.S. capacity for mass vaccination, estimates the U.S. will need anywhere from 100,000 to 184,000 people to staff vaccine clinics, of which 17,000 would have to be vaccinators, to meet the Biden Administration's goal of 100 million shots in 100 days.

"I think it would be extraordinarily difficult to just find those vaccinators," she says.

The private sector may be able to contribute, but Nuzzo cautions any partnerships cannot appear to favor the employees of the company.

Last week, Amazon offered to assist the Biden Administration on the vaccine rollout and has signaled it hopes to vaccinate its own front-line workers as soon as possible.

The unpredictable supply has limited the ability of some states to pursue mass vaccine sites, and many providers are still hesitant to schedule vaccines too far in advance. A hospital in Arlington, Virginia, canceled 10,000 appointments after the state changed how it allocates its supply of vaccines.

In Arizona, where there are two mass vaccine sites, appointments are already booked out through February.

Since the vaccine rollout began in December — when the Trump administration was promising 20 million doses before 2020 ended — Americans have heard confusing messages about when they'll be able to get a shot.

States still face the challenge of how to set realistic expectations. Many are ramping up their capacity to give vaccines, before the supply has caught up.

"The worry I have is that if we create expectations for how quickly people can get vaccinated and then don't deliver, people will become perhaps jaded or disappointed or, worse, mistrustful of vaccination efforts," she says.

More than half of unvaccinated Americans say they need more information about when or where they'll get vaccinated, according to a national survey from the Kaiser Family Foundation.

At his grocery store in Everett, Wash., Wil Peterson, a cashier, says he's heard his co-workers express confusion about the vaccine process.

"There's a lot of information that's been floating around, so I'm just trying to keep up with the latest developments," says Peterson, who's in his 50s and expects his turn to get a shot will come sometime in February.

Peterson worries about catching the virus every day he goes to work. He still has to cope with customers who refuse to wear masks, so he's eager to get vaccinated.

But he also knows it may not go smoothly, after hearing from a friend who tried to sign up for a shot.

"The site crashed, so I'm kind of bracing for maybe that happening when I try to do it, but I'm hoping that won't be the case," he says.

Carrie Feibel contributed to this story, which was produced as part f NPR's reporting partnership with Kaiser Health News.