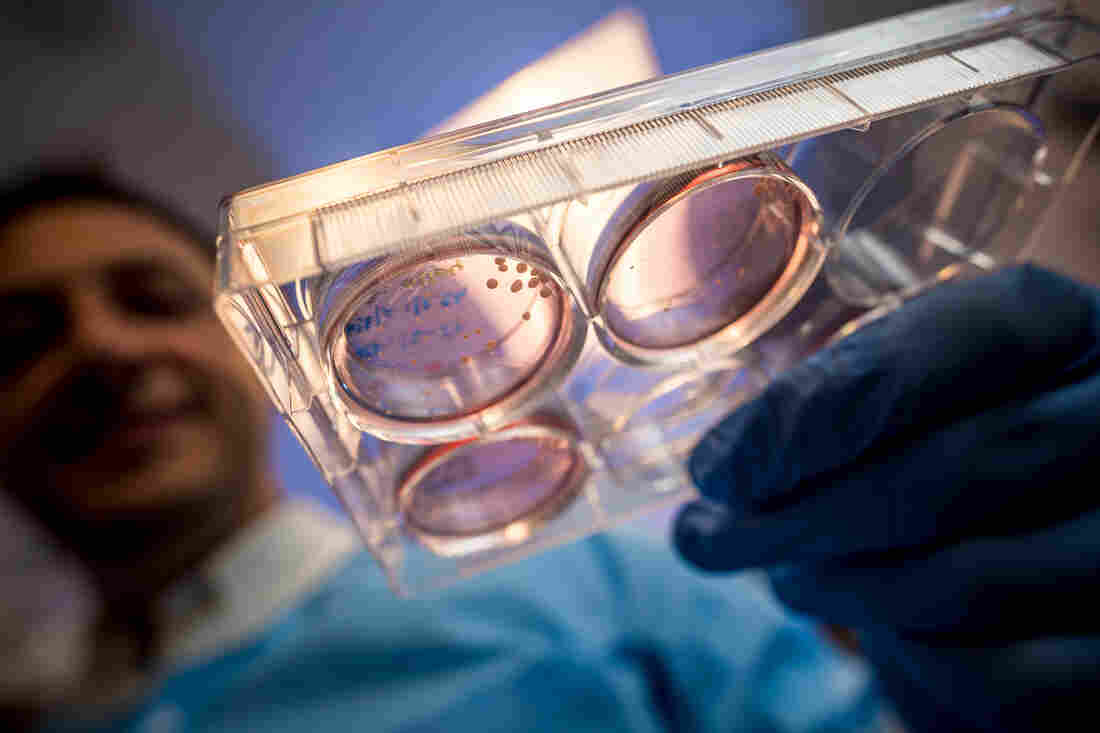 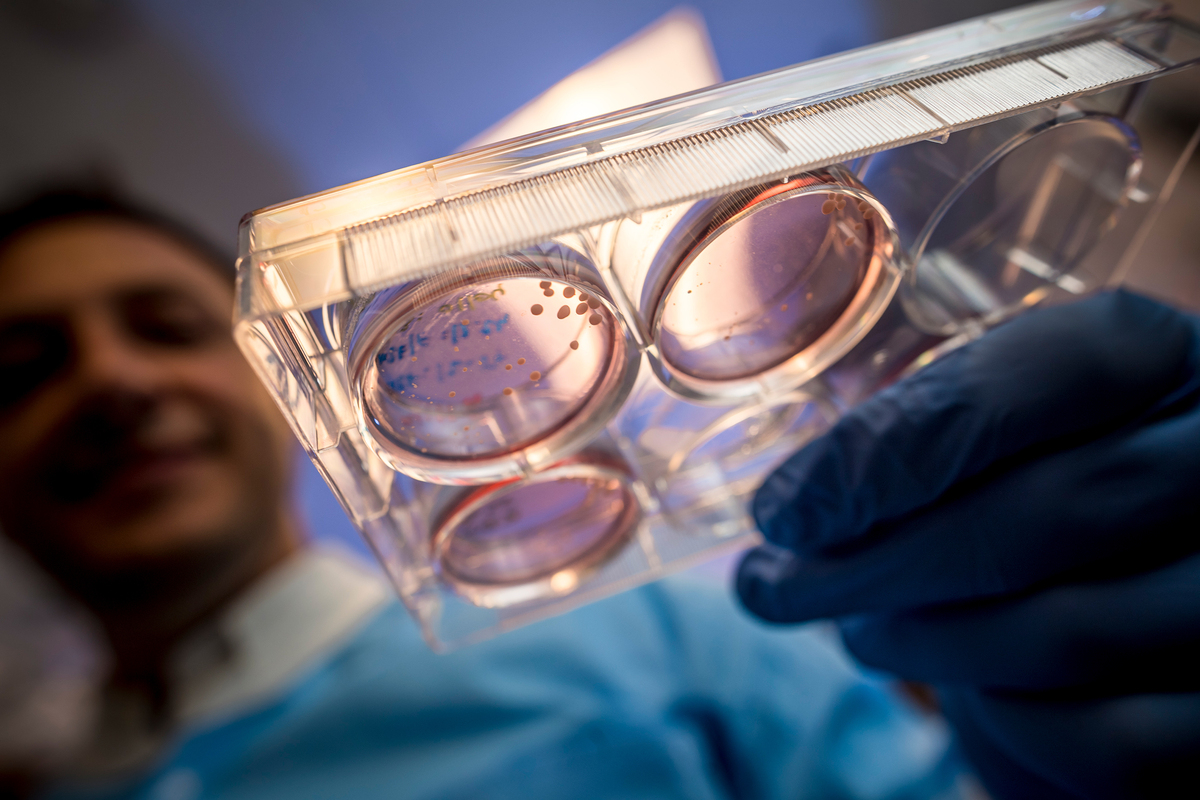 Fossils offer a detailed record of early human skulls but not the brains inside them.

So researchers have been using genetic material taken from those fossils to search for clues about how the human brain has evolved over hundreds of thousands of years.

And now they have succeeded in growing human brain organoids, or "minibrains," that contain the Neanderthal variant of a gene called NOVA1, a team reports in the journal Science.

"The archaic version of the gene changes the shape of these organoids," says Alysson Muotri, a professor at the University of California, San Diego and the Sanford Consortium for Regenerative Medicine. Instead of growing into a sphere with a smooth surface, he says, the Neanderthal organoids have an outermost layer that is uneven.

Organoids with the ancient NOVA1 gene also appear to mature more quickly and remain smaller than their modern counterparts, Muotri says. "The neurons start to get more active at very early stages," he says.

The findings are consistent with the hypothesis that modern humans evolved big brains that continue to develop long after birth in order to navigate complex social systems.

A brain that matures quickly is more capable at birth. But it's less likely to continue developing during childhood — the period when modern humans acquire important social skills.

Muotri and a large team selected NOVA1 because it's one of a relatively small group of genes that have changed significantly since Neanderthals and Denisovans roamed the Earth. It's also a gene known to play a key role in brain development. 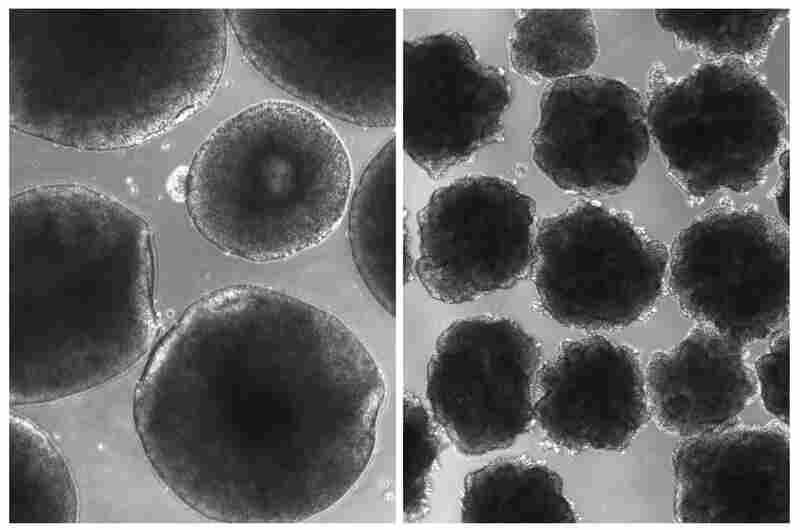 So NOVA1 offered a "perfect" way to see whether an ancient gene could alter the way the brain develops, Muotri says.

To find out, Muotri and his team turned to brain organoids, tiny clusters of human brain tissue that grow in the lab and mimic early brain development. But Muotri says existing organoids only had the modern version of the NOVA1 gene.

Muotri says there's probably a reason why humans with the new variant of NOVA1 survived while those with the old version died out.

"It might suggest that sometime during evolution we acquired that mutation and it [did] bring us [a] tremendous advantage to be able to have this complex brain later in life," he says.

That idea gets support from scientists who've been studying the influence of Neanderthal genes that are still present in many humans, especially those of European and East Asian ancestry.

"It's very exciting to be able to use our knowledge of archaic DNA to really explore what makes us who and what we are," says Dr. Karen Berman, chief of the clinical and translational neuroscience branch at the National Institute of Mental Health.

Her own research has shown that people with more Neanderthal genetic material tend to have skulls more like those of Neanderthals.

Berman and her colleagues have also found evidence that Neanderthal genes favored the creation of brain networks devoted to visual and spatial abilities rather than social interactions.

"It may have been the lack of these social networks that led to the Neanderthal dying out," Berman says.

Dr. Michael Gregory, a psychiatrist and scientist who works with Berman, says it's easy to imagine how Neanderthal brains could have become outdated.

"If they went foraging for foods or hunting, they could find their way back and forth to different places better," he says. "But they couldn't form groups quite as well to fight common predators."

And group cooperation has been critical to the success of modern humans.

All of the research on ancient brains is about much more than human history, Gregory says.

"The thing that drives us is not just how did things happen to develop over time and over evolution," he says, "but also how did they go awry and cause neuropsychiatric diseases?"

If scientists can answer those questions, Gregory says, they may be able to develop better treatments for disorders including schizophrenia and autism.