Accessibility links
COVID-19 Long-Haulers Struggle To Get Condition Recognized As A Disability : Shots - Health News Many patients suffering from long-term effects can no longer work and want the Social Security Administration to provide guidance on who qualifies for disability benefits.

3:38
When Does COVID-19 Become A Disability? 'Long-Haulers' Push For Answers And Benefits 3:38 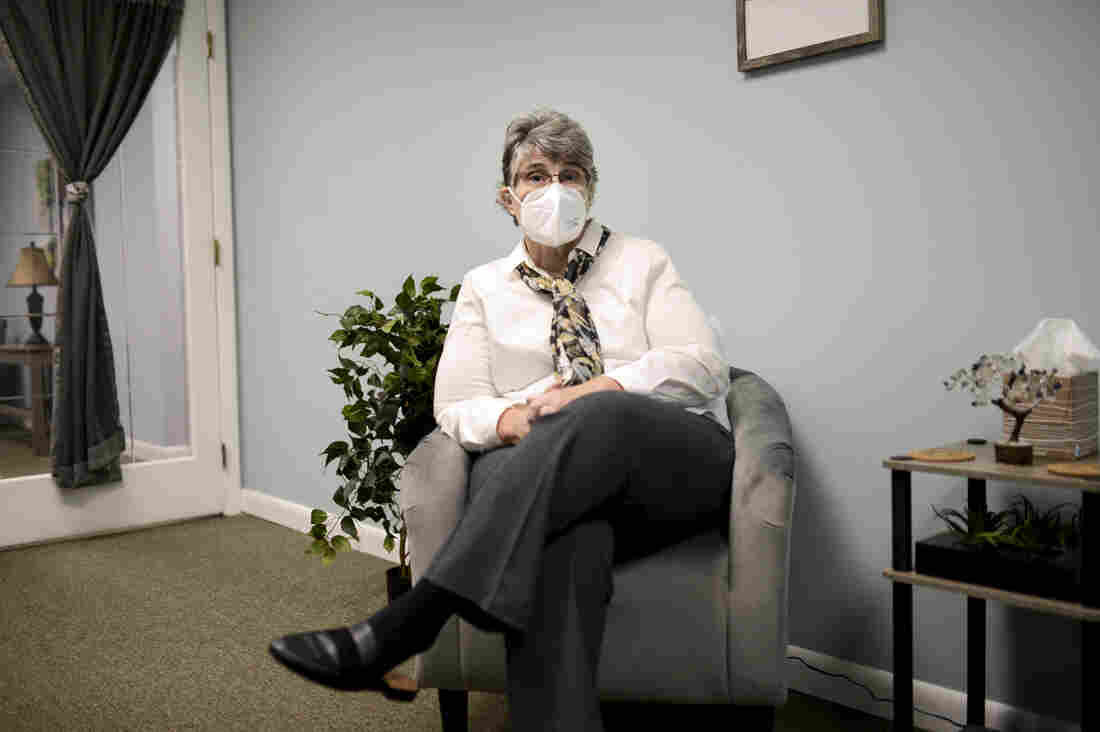 Jodee Pineau-Chaisson sits in her office in Springfield, Mass., on Jan. 12. Pineau-Chaisson, a social worker, contracted the coronavirus last May and continues to have symptoms even months after testing negative for the virus. Meredith Nierman/GBH News hide caption 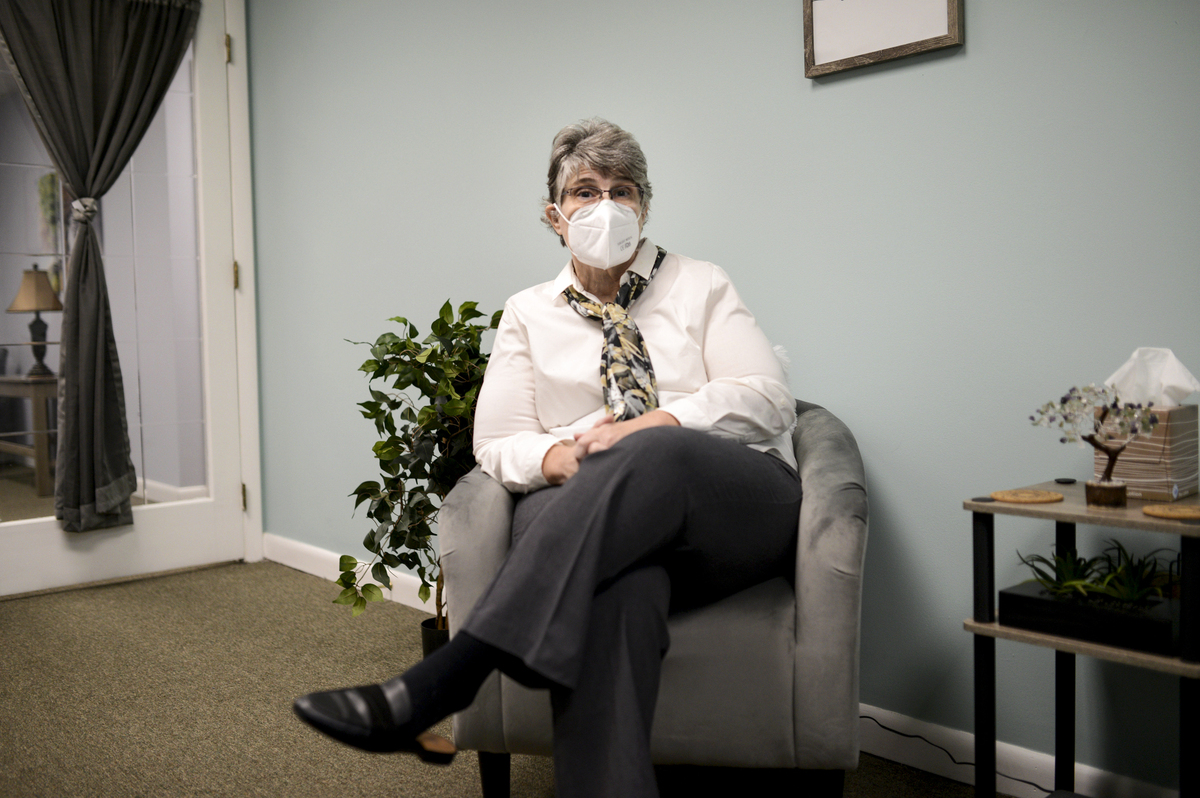 Jodee Pineau-Chaisson sits in her office in Springfield, Mass., on Jan. 12. Pineau-Chaisson, a social worker, contracted the coronavirus last May and continues to have symptoms even months after testing negative for the virus.

When COVID-19 first arrived in the U.S., Jodee Pineau-Chaisson was working as the director of social services for a nursing home in western Massachusetts. By the middle of April, residents at the Center for Extended Care in Amherst were getting sick.

In early May, Pineau-Chaisson was tapped for a particular duty: "I was asked to go onto the COVID-19 units to do FaceTime calls so they could say goodbye to their family members," she recalls. "I was very scared."

She was worried about contracting the virus but also felt like she owed it to her residents. So, at 55 years old and with no preexisting conditions, Pineau-Chaisson put on an N95 mask and a white jumpsuit and she entered the units to help. Three days later, she had COVID-19.

She says she's certain she was exposed at the nursing home since, at the time, she wasn't seeing anyone outside of work or shopping in stores, and she'd even moved out of her house and into an apartment to avoid bringing the virus home to her wife. Thinking back, Pineau-Chaisson wonders if she was sweating too much, which made it harder for her mask to work well. Or, perhaps, she got too close while trying to facilitate the FaceTime calls.

It has now been almost 10 months since Pineau-Chaisson got sick, yet she is still dealing with a series of devastating ailments. She says she has memory problems, body pain, heart palpitations, depression and chronic fatigue.

"Sometimes it can even be hard to walk up the stairs to my bedroom," she says.

Pineau-Chaisson's wife has become her primary caregiver. She said her wife has always been supportive and encouraging, even when she needed help getting in and out of the shower.

"She's a nurse, so I lucked out," Pineau-Chaisson says.

Pineau-Chaisson is a so-called long-hauler. These are people who survive COVID-19 but have symptoms — sometimes debilitating symptoms — many months later. As scientists scramble to explain what is going on and figure out how to help, disability advocates are also scrambling: They are trying to figure out whether long-haulers will qualify for disability benefits.

Disability advocates and lawmakers are calling on the Social Security Administration (SSA) to study the issue, update their policies and offer guidance for applicants.

"If we end up with a million people with ongoing symptoms that are debilitating, that is a tremendous burden for each of those individuals, but also for our health care system and our society," says Dr. Steven Martin, a physician and professor of family medicine and community health at UMass Medical School.

"We know what's coming. So, we have to make sure that we're on top of this," says U.S. Rep John Larson, a Democrat from Connecticut, who joined with another member of Congress to write a letter asking the SSA to work with scientists to understand what support long-haulers might need.

After contracting COVID-19, Pineau-Chaisson was hospitalized twice and took 12 weeks off work under the Family and Medical Leave Act. After that, she says, she was still dealing with "complete exhaustion" and "extreme memory loss." She wasn't well enough to return to work and, she says, the nursing home fired her.

David Ianacone, the health care administrator at Center for Extended Care in Amherst, acknowledged the termination. "She could not do the work," he told NPR. "Her health did not permit her to return."

Pineau-Chaisson decided to get a neurological evaluation and send in her application for Social Security Disability Insurance. SSDI is the federal disability fund that most workers contribute to through a payroll tax. If workers ever become too disabled to stay on the job, they can apply to SSDI for monthly checks. But criteria for the program are strict, and most applicants are denied.

"They said it could take two weeks to 10 months — and many times they'll deny you the first time," says Pineau-Chaisson.

COVID-19 survivors are the newest group to approach the federal government for disability coverage, and it's unclear whether they will be considered eligible.

"I do think it's still an open question. It's still a little iffy about whether [long-haulers] will be able to qualify," says Linda Landry, an attorney at the Disability Law Center in Massachusetts.

She says it seems clear that long-haulers qualify for protections under the Americans with Disability Act, which would afford them accommodations for things like housing and accessing government services. But the question of whether long-haulers will be eligible for federal disability benefits is still being debated.

Landry says there are three things, in general, that you need to qualify for benefits: First, a medical diagnosis. Second, evidence that the condition affects your ability to work. And third, the disability has to last for a while.

The requirement is that "you have to have had or are likely to have a condition that affects your ability to work for 12 consecutive months," Landry says.

Since COVID-19 has scarcely existed as a recognized disease for that long, this may be hard to prove, Landry says. She would like to see the SSA put out specialized guidance about COVID-19, similar to guidance the agency has released in the past for applicants suffering from debilitating headaches or fibromyalgia.

"It's really important that the Social Security Administration get ahead of this and start studying it now," says Kathleen Romig, a senior policy analyst at the Center on Budget and Policy Priorities who formerly worked at the SSA.

In a statement, the SSA told NPR that the current disability policy rules should be sufficient for evaluating COVID-related applicants, though the agency did not rule out taking additional action in the future. "Researchers are still learning about the disease and we will continue to look at our policies as research evolves," the statement said.

A lot of unknowns

Larson serves on the congressional subcommittee that handles Social Security issues. He says it is challenging for the SSA to prepare for the situation because a number of important facts about long-haulers are still unknown.

For example, scientists are still studying how to treat the debilitating symptoms of long-haulers, and it is unclear whether treatment will enable some individuals to eventually return to work.

Researchers are also still trying to define the most common symptoms, establish roughly how many long-haulers there are, and determine how many of them have symptoms that are truly debilitating.

Some estimate that as many as 10% of COVID-19 survivors will have persistent symptoms, while others think it's lower. Dr. Zeina Chemali, who runs a clinic for long-haulers at Massachusetts General Hospital, says early studies from Europe suggest it may be between 3% and 5%.

Larson points out that even if only a small percentage of COVID-19 patients end up as long haulers there could still end up being a lot of them, given that more than 25 million people in the U.S. have been infected with the coronavirus.

"Not all 25 million are going to be long-haulers, but what percentage will be? And who among that group should we be targeting and looking at and focusing on?" Larson says.

Chemali says the problem reminds her of the long-lasting consequences that can come from lyme disease or encephalitis. Chemali's clinic is looking into whether COVID-19 puts your brain at long-term risk for things such as strokes and neurodegenerative disease. She says they don't yet know the answer.

"This is not the first time in history that we see those neuropsychiatric, neurocognitive complications," she says. "So, we put it under this bigger rubric of a post-viral syndrome."

Chemali says staff at her clinic spend a lot of time trying to help long-haulers return to work. In particular, she has encouraged hospitals to accommodate medical personnel who contracted COVID-19 at work and have struggled to return to their previous jobs and responsibilities.

"We are really pushing to get the [medical] system to help us by placing accommodations," Chemali says. "[Long-haulers] might need to have less hours, better shifts, have more assistance at work."

When it is not possible for a patient to resume working, Chemali's clinic helps prepare the paperwork for a disability application. But after the application is sent off, Chemali says, it is up to the SSA to determine whether someone qualifies.

That's why it's important that the SSA pays attention to long-haulers, Larson says. In his view, the SSA faces a fundamental question: "What do we have to do to make sure that we're there for these individuals?"