Accessibility links
Southeast Texas Was Spared The Brunt Of Hurricane Laura. Now The Cleanup Begins : Hurricane Laura Live Updates Heavy winds knocked down trees and some homes lost power. But many residents around Port Arthur are breathing a sigh of relief after the storm passed without causing major damage to the area.

Southeast Texas Was Spared The Brunt Of Hurricane Laura. Now The Cleanup Begins

Southeast Texas Was Spared The Brunt Of Hurricane Laura. Now The Cleanup Begins A store in Port Arthur, Texas, suffers wind damage in the aftermath of Hurricane Laura. Though there was some damage, many Jefferson County residents say they were lucky the storm did not do more. Lucio Vasquez/Houston Public Media hide caption 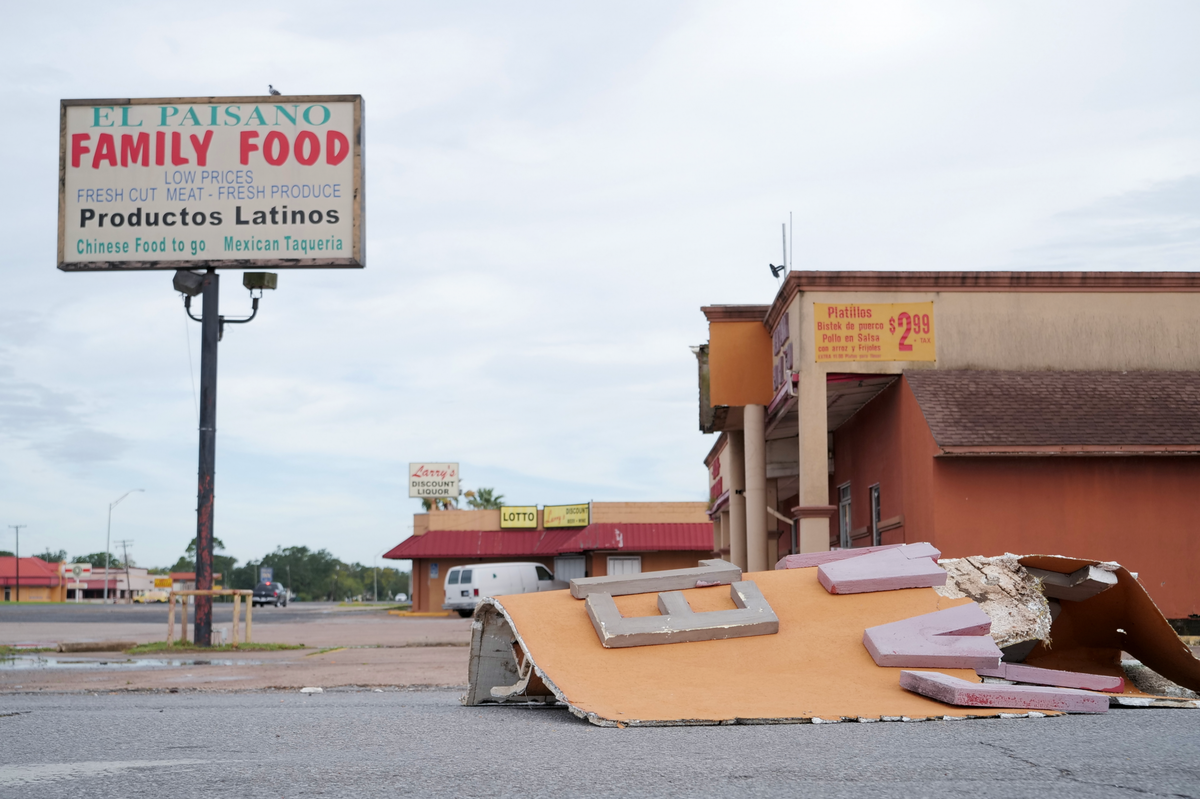 A store in Port Arthur, Texas, suffers wind damage in the aftermath of Hurricane Laura. Though there was some damage, many Jefferson County residents say they were lucky the storm did not do more.

People in Jefferson County, Texas, where Hurricane Laura was projected to cause serious damage, are breathing a sigh of relief Thursday after the storm moved into Louisiana and points north without leaving too much impact on the community. Now many of those southeast Texas residents are working on cleaning up what little damage there is.

In an H-E-B grocery store parking lot Thursday morning in Port Arthur, representatives from Texas Search and Rescue were considering their next move. The cleanup there won't be nearly as difficult as once thought, though heavy winds did knock down trees overnight in the middle of many neighborhood streets.

Some power lines were down, and Jefferson County officials said the storm caused outages for just under 63,000 people at first count. Two-thirds of those are in Port Arthur.

Jesus Herrera, 35, stood on his block early Thursday, surveying some of the damage, which included a downed power line that only avoided landing on a nearby house thanks to a tree blocking its path.

Herrera said he lost power about an hour into the storm, which arrived nearby at about 11 p.m. CT. And he said he's glad that power is all he lost.

"It was kind of like a movie scenario, I guess you could say," Herrera said. "Sound effects, you've got like the wind blowing, and then the thunderstorms and all of a sudden you hear this big old loud, 'crack!' "

​Port Arthur Mayor Thurman Bartie told NPR's Morning Edition that he was thankful for how the city fared.

"​There was minimal damage," he said. "We have teams out as I speak assessing the damage, some power outages, some tree limbs in roadways, but not as many as we've seen in other incidents."

Port Arthur was one of the first cities in Texas to order evacuations ahead of the hurricane.

Those evacuations were complicated by the coronavirus pandemic, but Bartie said he feels good about his decision.

"You know I'm still confident I did the right and correct thing, because that was to get all of the people who I'm responsible for out of harm's way," he said.

In an effort to keep evacuations socially distanced, emergency managers had evacuees fill hotel rooms across the state Wednesday night instead of large shelters.

Some residents on the Texas-Louisiana coast rode out the storm Wednesday night into Thursday despite mandatory evacuations. In the Texas town of Nederland, Chad Chappell said he stayed home as the storm blew in.

While Chappell said he didn't see flying debris, he still did not have electricity at his home Thursday morning — though he added not all homes in the area lost power.