World Leaders Express Hope As Biden And Harris Are Sworn In

World Leaders Express Hope As Biden And Harris Are Sworn In 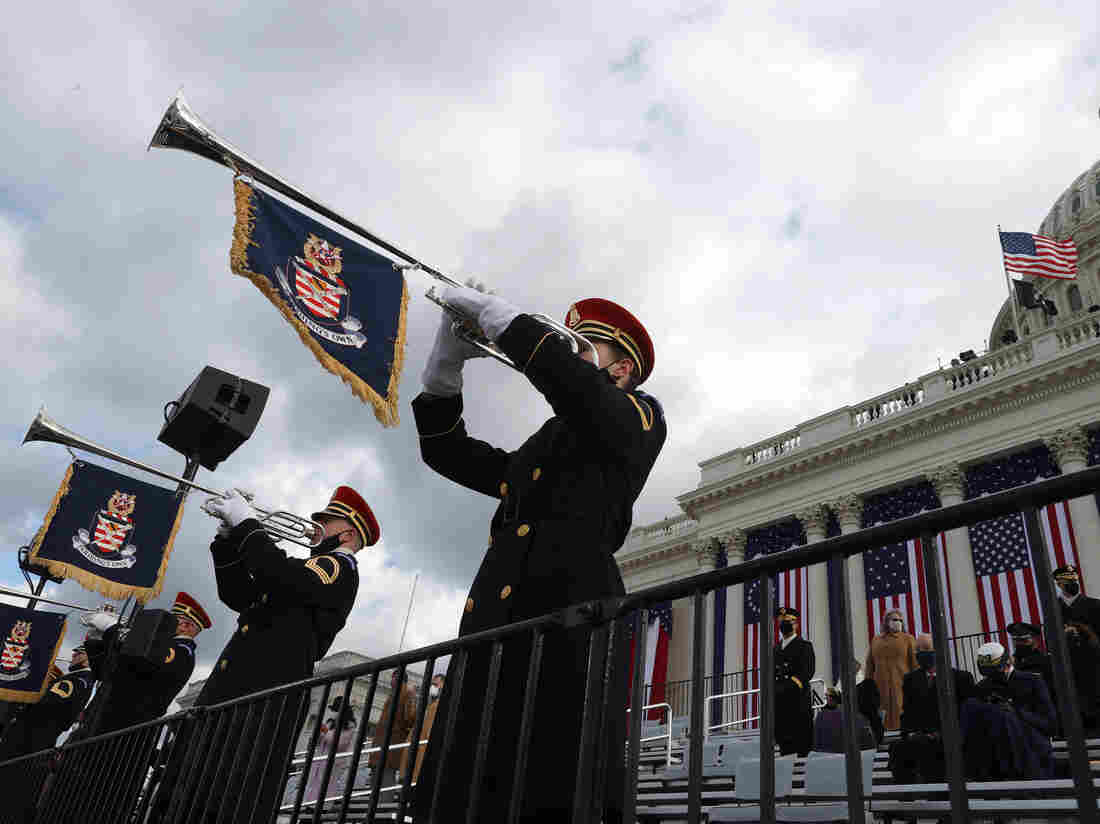 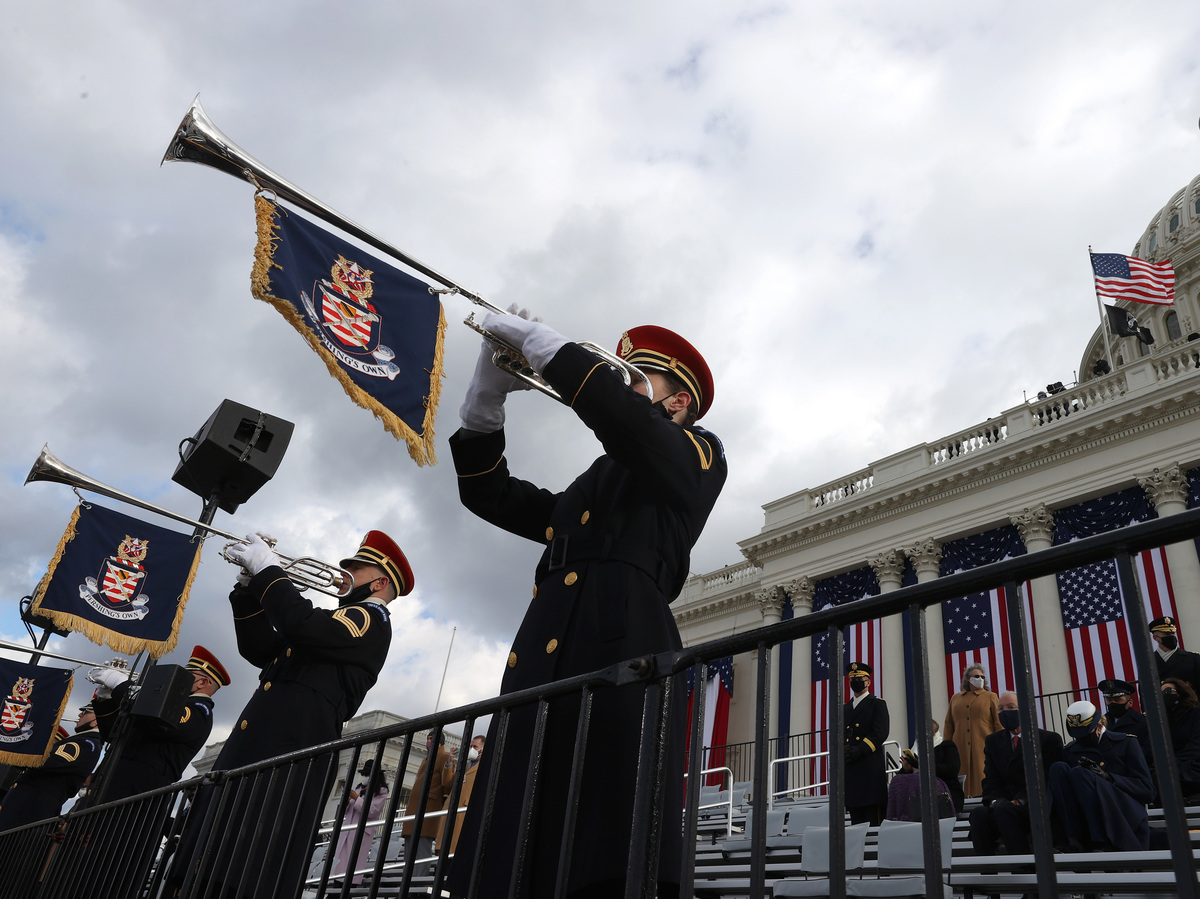 The U.S. Army Band plays "Pershing's Own" during the inauguration Wednesday. World leaders, former officials and citizens voiced optimism with the arrival of a new U.S. administration.

As the United States inaugurated Joe Biden as the 46th president, world leaders, citizens and former officials offered congratulations and expressed hope that the new administration will lead to better relations and reverse some of the policies of his predecessor.

"The United States is back. And Europe stands ready," Ursula von der Leyen, president of the European Commission, proclaimed in a tweet hours before the swearing-in Wednesday.

She referred to Biden as "an old trusted partner," adding: "I look forward to working together with Joe Biden."

The United States is back. And Europe stands ready.

To reconnect with an old and trusted partner,
to breathe new life into our cherished alliance.

I look forward to working together with @JoeBiden pic.twitter.com/gc7HIIg2Z8

European Council President Charles Michel echoed her sentiments. In a speech to the European Parliament, he said he hoped it would be "a day of peaceful transition" in Washington and "an opportunity to rejuvenate our trans-Atlantic relationship, which has greatly suffered in the last four years."

German Chancellor Angela Merkel, who found herself frequently at odds with former President Donald Trump, said, "I look forward to a new chapter of German-American friendship and cooperation."

French President Emmanuel Macron also shared optimism. "We will be stronger to face the challenges of our time. Stronger to build our future. Stronger to protect our planet. Welcome back to the Paris Agreement!" he tweeted in a nod to Biden's plan to rejoin the international deal on climate change, nixed by Trump.

British Prime Minister Boris Johnson also called Vice President Harris' inauguration "historic" and said, "America's leadership is vital on the issues that matter to us all, from climate change to COVID."

The leaders of Italy, Greece, Spain and other European Union members shared enthusiasm for the day.

Hungarian Prime Minister Viktor Orban, one of the EU's few strong fans of Trump, offered congratulations to Biden but noted how his country's relations with the U.S. had improved under the previous administration. "I firmly believe that the past four years have proved that the friendly and mutual beneficial cooperation between the USA and Hungary hold a great potential in many areas," Orban wrote in a letter shared online by a spokesman. "It is my pleasure that this space of time has opened up new horizons in our bilateral relations in the fields of security, energy policy and economy."

PM Orbán congratulates @joebiden @potus: "The past four years have proved that friendly and mutually beneficial cooperation between US and Hungary could bring about great opportunities in multiple sectors." Here's the full text of the letter 👇🏻 pic.twitter.com/cUEwZF9oqT

Pope Francis also shared sentiments on Inauguration Day, saying under Biden's leadership "may the American people continue to draw strength from the lofty political, ethical and religious values that have inspired the nation since its founding."

"At a time when the grave crises facing our human family call for farsighted and united responses," he continued, "I pray that your decisions will be guided by a concern for building a society marked by authentic justice and freedom, together with unfailing respect for the rights and dignity of every person, especially the poor, the vulnerable and those who have no voice." He also said he asks God "to guide your efforts to foster understanding, reconciliation and peace within the United States and among the nations of the world."

The governments of the closest U.S. neighbors chimed in as well. Canadian Prime Minister Justin Trudeau said on social media that "our two countries have tackled some of history's greatest challenges together — and I'm looking forward to continuing this partnership." Mexican Foreign Minister Marcelo Ebrard said he hoped to have a good bilateral relationship and begin a new era of mutual respect.

Brazilian President Jair Bolsonaro, a huge admirer of Trump's, offered a series of tweets, including one that the relationship between the two nations is "long, solid and based on high values."

During the U.S. presidential campaign, Biden threatened to sanction Brazil if its leader didn't do more to protect the Amazon rainforest. For his part, Bolsonaro responded by posting angry messages and proclaiming that the Amazon was a sovereign issue.

In Colombia, a key U.S. ally in South America, President Iván Duque Márquez shared his thoughts in a video message posted to Twitter, where he highlighted the relationship between the two nations that he said is "increasingly strong."

In India, Prime Minister Narendra Modi tweeted his "warmest congratulations to @JoeBiden" and said: "I look forward to working with him to strengthen India-US strategic partnership."

My warmest congratulations to @JoeBiden on his assumption of office as President of the United States of America. I look forward to working with him to strengthen India-US strategic partnership.

Meanwhile, Indian Hindu faithful gathered at a temple in Harris' ancestral village to offer prayers and celebrate her inauguration, nearly 10,000 miles away.

A priest washed a Hindu idol in milk as the faithful rang the temple's bell in Thulasendrapuram, a village nestled in rice paddies 200 miles south of the Tamil Nadu state capital of Chennai. Posters of Harris adorn walls there.

Harris' late maternal grandfather was born in the village, though he left for Chennai decades ago. Still, former neighbors herald Harris as their native daughter. She was born in California to an Indian mother and Jamaican father.

Harris is making history as the first woman, first Black person and first person of Asian descent to become a U.S. vice president. 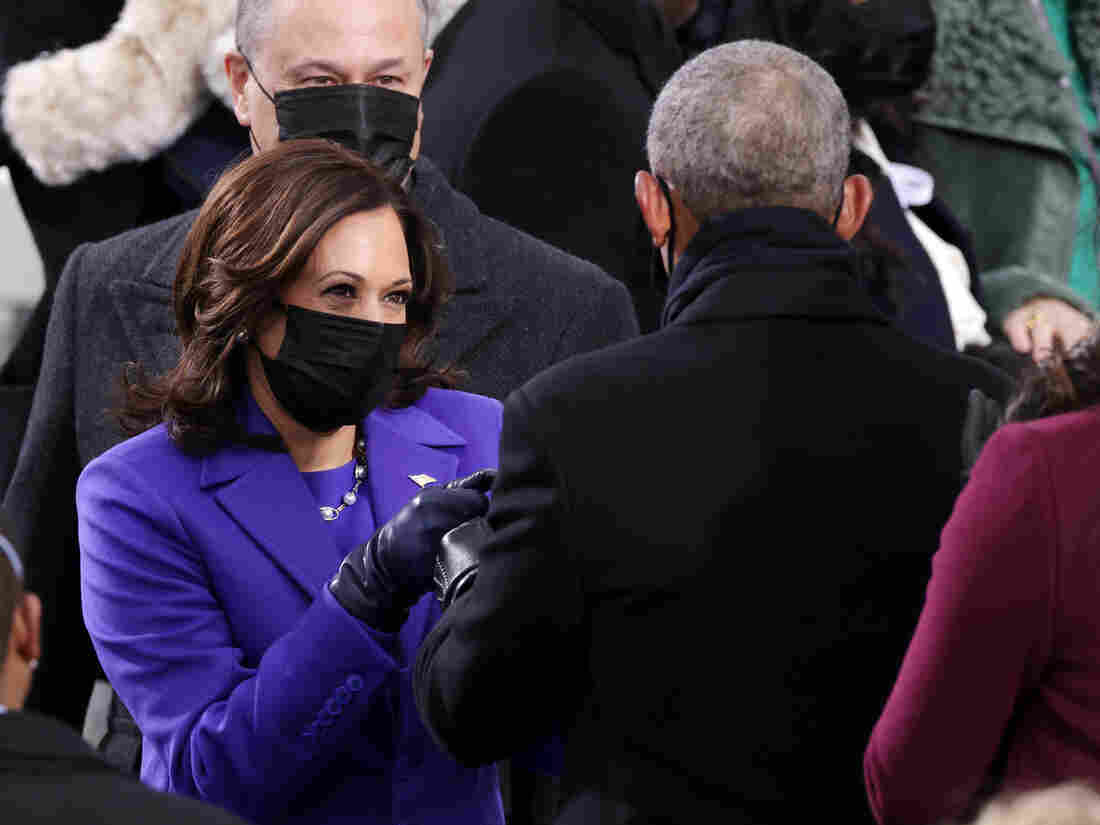 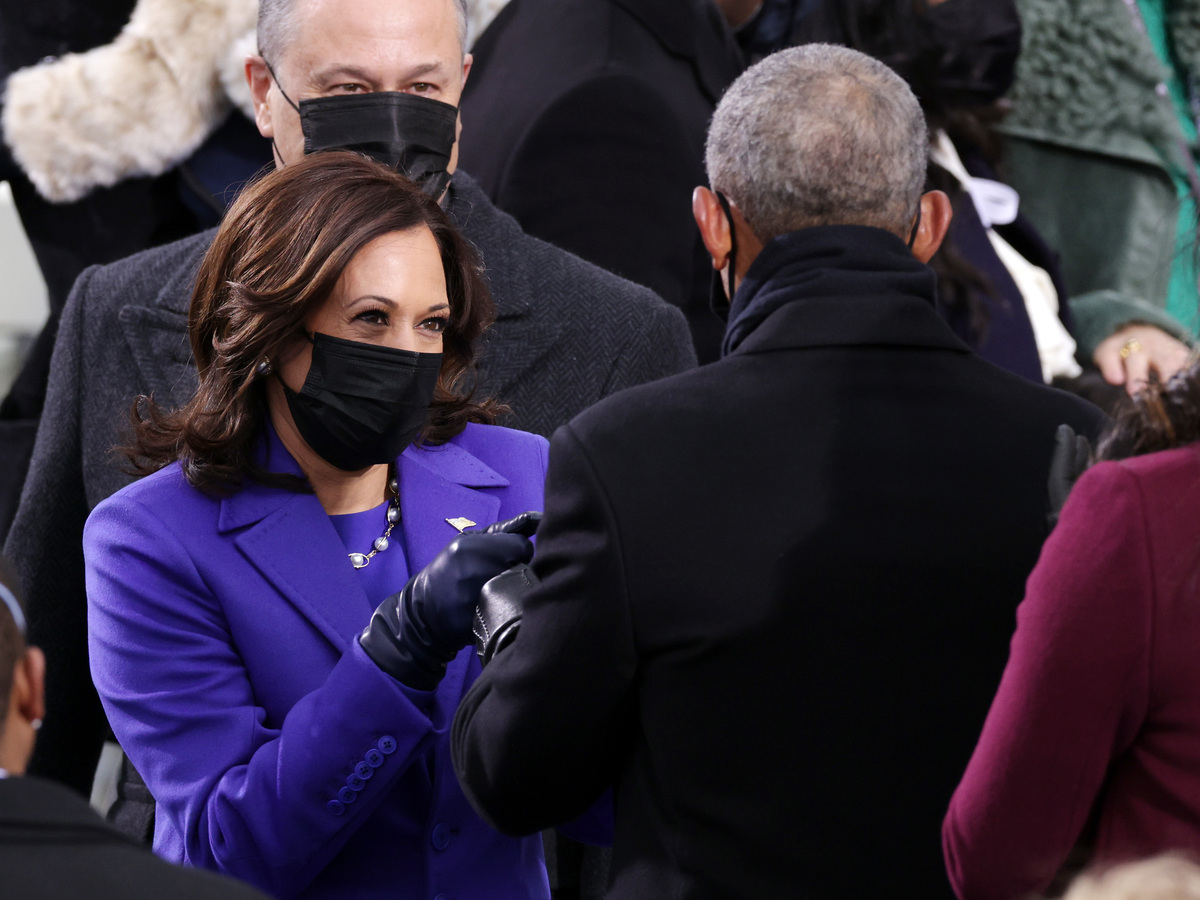 "Today all the people in the village are very happy," a former neighbor told local TV. "We all are very excited. Kamala Harris inspires all the women in the village."

In Pakistan, there were signs of relief and optimism, with expectations that the Biden administration will offer a more stable path than the rocky years of the Trump presidency.

"Trump was unpredictable," says Javed Ashraf Qazi, a retired head of Pakistan's military intelligence agency, known as the ISI. "But Joe Biden has plenty of experience so one expects stability in the relationship."

During his presidency, Trump lashed out at Pakistan, including in his first tweet of 2018, where he accused Islamabad of harboring terrorists. He also cut off military aid, including a program to bring Pakistani military officials to the U.S. for education courses. That program was long seen as ensuring personal relationships between U.S. and Pakistani military officials, even in times of tension.

Speaking to local media network Geo ahead of the inauguration, Pakistani Foreign Minister Shah Mahmood Qureshi said Biden has nominated people who "understand the region very well" without specifying whom he meant.

"Challenges will be there," he added. "We have to face the facts, but I believe Pakistan has a lot to offer."

A spokesperson for Russian President Vladimir Putin told reporters in Moscow the Kremlin is ready for improved U.S. relations. The spokesperson said Putin has always been interested in good relations with the U.S. — but that the feeling wasn't mutual in recent years. Putin waited for more than a month to congratulate Biden on his victory.

U.S. allies and adversaries will also watch the new administration closely for plans with Iran. Trump withdrew the U.S. from the Iran nuclear deal, imposed sanctions on the country and carried out an attack that killed a top Iranian military leader.

Iranian President Hassan Rouhani said he hopes Biden administration officials "sincerely return to the law and show their honesty in practice; we will also fulfill our own commitments," according to Iran's Press TV. Rouhani said the "ball is in the U.S. and Washington's court," Iran's Fars news agency reported. "Trump's black page will be closed forever, and we say thanks God when any oppressor is overthrown."

In Israel, officials offered praise of both Trump and Biden, while voicing concern about the new administration seeking a nuclear deal with Iran.

Prime Minister Benjamin Netanyahu released a video statement just as Biden was sworn in. Flanked by Israeli and U.S. flags, he congratulated Biden and Harris on their "historic inauguration," and addressed the U.S. president personally. "President Biden, you and I have had a warm personal friendship going back many decades. I look forward to working with you to further strengthen the U.S.-Israel alliance, to continue expanding peace between Israel and the Arab world and to confront common challenges, chief among them the threat posed by Iran. I wish you the greatest success."

Israeli Intelligence Minister Eli Cohen said on Israel Army Radio, "We can't not say a big thank you to President Trump, the best friend Israel ever had in the White House since the founding of [Israel] with unprecedented achievements."

Regarding Biden, Cohen said, "We hear voices in the U.S. administration that are considering the Iran issue and talking about a deal. ... [A]ny agreement with Iran won't be worth the paper it's written on."

For their part, Palestinians vow to hold long overdue elections in an effort to reunite a divided Palestinian leadership and start a fresh chapter with Biden.

"The victory of U.S. President Joe Biden is one of the most important catalysts for holding elections during this period, in preparation for the entry of Palestinian-American relations in a new phase that may lead to the resumption of the political process," wrote former Palestinian Cabinet minister Ashraf al-Ajrami in the Palestinian daily Al-Ayyam.

On the day the U.S. inaugurated its new president, the Chinese government was focused on lashing out at the outgoing administration. China hit 28 former officials of the Trump administration with sanctions, including Mike Pompeo and John Bolton.