Accessibility links
Welcome to the 'In Character' Blog : In Character Hello there. I'm Elizabeth Blair, and given the nature of this project, I thought I'd introduce myself by way of my two favorite fictional characters. At the moment they are:

Welcome to the 'In Character' Blog

Welcome to the 'In Character' Blog

Hello there. I'm Elizabeth Blair, and given the nature of this project, I thought I'd introduce myself by way of my two favorite fictional characters. At the moment they are: 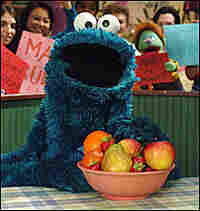 Cookie Monster: Such a pop-culture phenom that he made headlines when he confessed to varying his diet now and then. Theo Wargo, Sesame Workshop hide caption

(1) Cookie Monster, thanks to my soon-to-be 3-year-old son, Ben; and (2) Achilles, thanks to Bill Mullen. He's a classics professor at Bard College; I interviewed him for today's All Things Considered story introducing the In Character series.

Why these two? Well, Cookie Monster because he's clear about what he wants.

Achilles because, as Mullen explains it, the raging soldier of Greek myth has a lot to teach us about the psychological trauma of war. There's even a psychiatrist in Boston, Dr. Jonathan Shay, who uses Achilles to help combat veterans heal.

(One note: Achilles, obviously, isn't American -- which is one of the criteria for the characters we'll examine throughout this series. But in this first radio piece, I explore the building blocks of a great character. I also wanted to point out that fictional characters have illuminated human behavior in profound ways for centuries.) 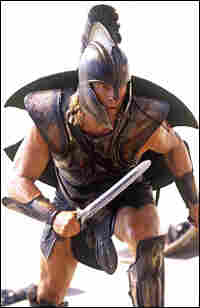 Achilles: Yep, we know he's not American. (Though hey, at least Brad Pitt is.) But we're not rule-bending, we're framing the debate: Unforgettable characters have been around for millennia. And like all truly indelible characters, Achilles has a tragic flaw -- which helps him teach us something about what it means to be human. Warner Bros. Pictures hide caption

Now, Achilles and Cookie Monster might not seem like they have anything in common. But in a way, that's the point: They're a reflection of the range of characters we'll hear from and hear about in the In Character series.

Back to introductions, though: I'm a senior producer, reporter, editor, etc. on the arts desk at NPR. In Character is an extension of two other series I worked on: The NPR 100, which explored American musical works of the 20th century, and Present at the Creation, which examined a range of Americana — from the pinup to the expression "OK."

Among the things I'm looking forward to about In Character are the debates we're sure to have about whether a particular character is really important. It'll also be interesting to hear about different interpretations of the same figure. Can't wait to hear yours.

Another introduction: Trey Graham, my fellow blogger on this project. He's an arts journalist working in NPR's Digital Media shop, and a theater critic for both the local PBS affiliate and the local alt-weekly newspaper here in Washington, D.C.

Both of us are excited about In Character. And both of us want you to let us know about your own favorite American characters.

Just remember, we're talking about fictional characters, not the real-life characters we all know — however entertaining their antics may be.