Accessibility links
On Air: The Little Tramp : In Character » Hear the 'All Things Considered' radio commentary

On Air: The Little Tramp

On Air: The Little Tramp 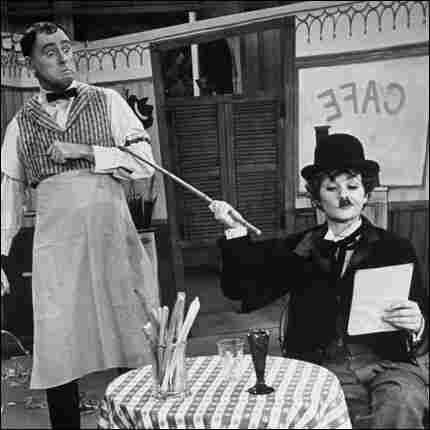 Editor's note: Turns out writing and producing an 8-minute radio essay wasn't enough to get all the Chaplin out of Bob Mondello's system. He offered up a sidebar on the best of the Little Tramp onscreen; I told him to save it for the blog. Enjoy. -- Trey Graham

When I was in college, I took only one film-appreciation class — cured me of them, actually. My professor had a sort of dictatorial way of talking about movies ... expected us to accept his judgment of them. As a budding critic, I was disinclined to accept without question anyone else's opinion.

One thing he made us memorize for the midterm was "the five greatest Chaplin films in order of their greatness." It was that last phrase that got me: I still remember he thought The Great Dictator was tops. But that was the one in which Chaplin was not the Little Tramp -- and even then I knew that was crazy.

Chaplin made dozens of films starring the Tramp, but only five full-length features. They're all pretty glorious, and though I have my personal favorite (Modern Times), I'll not argue if you like City Lights or Gold Rush better. (We might have a dustup if your fave is The Circus.

Otherwise, I'd say just enjoy. The five features, in order not of their greatness, but of their release:

The Kid (1921) The Little Tramp adopts a tyke (Jackie Coogan) and wades into serious sentimentality for the first time. Audiences complained that Chaplin was trying to take their comedy away, but they showed up in droves. Besides, Chaplin taught Jackie Coogan all his mannerisms, and watching the Kid doing the Tramp's tricks turns out to be every bit as funny as it is adorable.

The Gold Rush (1925) Much of the picture features the Little Tramp snowbound in a cabin while he's prospecting for gold with just one other prospector (Mack Swain as Big Jim McKay). But the film's scale is so grand that it's acknowledged as one of only two great silent-comedy epics. (The other is Buster Keaton's The General.) Highlights include the dance Chaplin does with dinner rolls, the boiled shoe he serves for Thanksgiving dinner, and the cabin teetering on the edge of a cliff.

The Circus (1928) A bedraggled circus entertains absolutely no one until the Little Tramp stumbles into the ring one afternoon and cracks up the audience without meaning to. The circus manager hires him immediately — the only problem being that the Tramp only makes people laugh when he's not trying to. He can't do it on purpose. Sort of a primer on comedy ... a little strained in spots, but a must for anyone who wants to know how comedy works.

City Lights (1931) Sentiment's in full glorious flower in this story of a blind flower seller who doesn't realize that the guy who's offered to pay for an operation so she'll see again is a tramp. (Chaplin as a boxer, street sweeper, buddy to an eccentric millionaire who only likes him when he's drunk.) All hilarious, and after laughing all through it, the ending wrings tears without even trying. Thought by many critics to be the Little Tramp's finest film.

Modern Times (1936) The last film in which the Little Tramp appeared is my unabashed favorite. At the height of the Depression, a down-on-his-luck Chaplin takes a job in a factory (and gets caught in its gears), takes a night-watchman job in a department store (and becomes a Nijinksky on roller skates), goes to jail, leads a protest rally, sings a song (the only time audiences ever heard the Tramp's voice) — and ends up with "the Girl" (Paulette Goddard). Transcendent.

Editor again here: Do make sure you check out the All Things Considered story. I promise you'll want to listen, when the audio is live, not just read it; Bob's essay is really lovely, and all the more impressive for being a radio piece about a silent film star. -- Trey Graham