Accessibility links
From a Stereotype, a Certain Seize-the-Day Bravura : In Character Clearly Long Duk Dong is alive (and well?) -- as all great characters are. There's a particular thread in the comments on Monday's blog post that I'm really glad to see, since I didn't have a chance to really talk about it in the radio piece. As

From a Stereotype, a Certain Seize-the-Day Bravura

From a Stereotype, a Certain Seize-the-Day Bravura 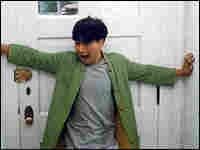 Making his own kind of noise: Gedde Watanabe's Long Duk Dong made life difficult for many, but some see a kind of inspiration in his singularity. Universal Pictures hide caption

Clearly Long Duk Dong is alive (and well?) -- as all great characters are. There's a particular thread in the comments on Monday's blog post that I'm really glad to see, since I didn't have a chance to really talk about it in the radio piece. As lyman put it:

I mean, c'mon - things are pretty crappy for him. Grandpa and Grandpa are treating him like [a] servant, the other kids and snotty brothers are laughing at him, but he goes out and has the time of his life.

Asian or not, Long Duk Dong might as well be a stand-in for "carpe diem." I certainly cannot claim, back in my time as an awkward teen terrified of the other sex, to have embraced life's opportunities the way he did. Sure, we all went to school with that guy who was such a dork, he didn't even realize it. But I confess: when that dork found love with another dork, and together they seemed happy, I was a bit jealous.

The icing on the cake here is a comment that's buried way down in the thread -- one with special relevance to Sixteen Candles:

To this day, when I walk in public, throughout the world, people will double-take, then stare, then smile and then yell, "Oh sexy girlfriend!"

That one made me do a double-take: It's from Debbie Pollack, whose first movie role was as Long Duk Dong's "sexy girlfriend!" She goes on to say some poignant stuff:

Like Gedde, I will forever be trying to break from a very strong and defined character. Yet, it is a character/stereotype, good or bad, that gives us moments to be who we are, actors. Love or hate the character, we are hired to do a job, interpret a writer's words and sometimes we get to make people laugh in how we do that.

From talking to Gedde Watanabe, I got a clear sense that he doesn't see himself just as an actor, but as a comic actor. And with Long Duk Dong, he did what actors are so often told to do: "Make it bigger!" He performed that role with a certain "seize the day" mentality -- and we remember the Donger, in part, because he succeeded.