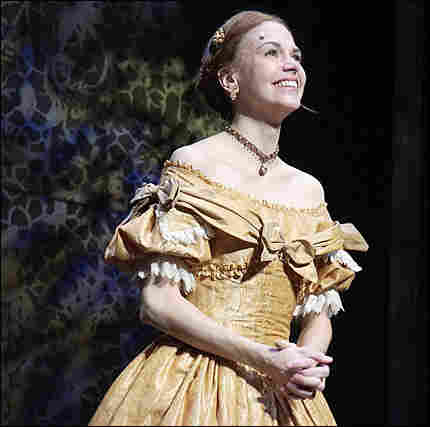 Not an illustration: The publicists at Penguin (parent of Grosset & Dunlap) are still digging up permission for us to reproduce the illustrations Lynn Neary blogs about below. Meanwhile, here's your alternate Jo -- actress Sutton Foster in the short-lived 2005 Broadway musical version of Little Women. Bryan Bedder, Getty Images hide caption

When I started to work on this story I dug out the copy of Little Women that I read as young girl.

When I opened it up, there was an inscription on the front page. It was dated May 4, 1953 -- my oldest sister, Maureen's, confirmation day. The book was a gift to her from our Uncle Buddy, a favorite uncle because he was young and handsome and always gave us great presents.

I was not yet old enough to read when Maureen got this present, but it was this same book that I would read many years later. It passed down from Maureen, to Jeanne to Joann and finally to me.

At some point, Joann signed her name in the front of the book. The four "Neary girls," as we everyone called us, felt a close connection with the four March sisters, and we each wanted to claim ownership of the book.

I think it was a major oversight that I, the youngest, somehow managed to spirit this copy of Little Women away when my parents' house was sold.

Though it's now falling apart, the book's illustrations are as vivid as ever. And it's the pictures that really make this edition so special: There are full-page color illustrations interspersed throughout the book.

In one, the four girls and Marmee stand around a piano in a softly lit room, singing songs. In addition to such tableaus, there are also black and white sketches, including the famous scene of Jo and Prof. Bhaer "under the umbrella."

I brought the book with me when I interviewed my friend Mary for this story. We both sighed as we turned the pages, our eyes lingering on our favorite illustrations.

Mary said she always waited to look at the pictures, feeling that it was cheating to jump ahead in order to find out what was coming next in the story. But thinking back, I don't think I was so disciplined. I'm pretty sure I couldn't resist sneaking a peek.