Accessibility links
On Air: Charlotte A. Cavatica : In Character » Hear the 'All Things Considered' essay

On Air: Charlotte A. Cavatica

On Air: Charlotte A. Cavatica

» Hear the 'All Things Considered' essay 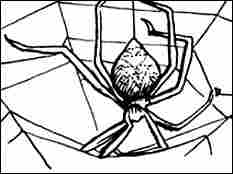 Illustrator Garth Williams told the author of The Annotated Charlotte's Web that E.B. White himself amended Williams' concept for Charlotte, which had originally been based on arachnological illustrations:"He put two dots on the edge of her face looking down and put 3 strokes to suggest hair on the top of her head."The effect worked, Williams conceded, and Charlotte became a likable heroine without being recognizably anthropomorphic -- "but I contend [White] cheated." Garth Williams/HarperCollins hide caption

Baltimore, Md., librarian Fran Glick was the NPR.org user whose essay about Charlotte A. Cavatica caught our attention back in February.

Now, from All Things Considered host Melissa Block, comes this on-air appreciation of the elegant, if complicated, arachnid at the center of Charlotte's Web.

Block talks to the granddaughter and stepson of author E.B. White -- and to the author of The Annotated Charlotte's Web -- about how much painstaking research went into the creation of the character.

And about how adults and children differ in their reactions to her story.

The producer of the 1970 audiobook edition talks about White's own "ridiculous" reaction when he tried to record the book's infinitely sad closing sequence.

(What was your reaction as a kid? How does it affect you now? Share your Charlotte stories in the comments.)

And it wouldn't be an 'In Character' story without some extras, so you can hear White himself read a passage from the book. It's all over here on the story page.