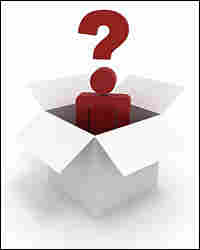 Blind Items: In NPR's internal In Character wars, who said what about whom? And which fictional figure best embodies the In Character ideal? Read on ... iStockphoto hide caption

Sorry to butt in here on the official NPR website. I've hacked my way onto the In Character blog because I ... I ...

I just need to share with you some shocking revelations. Revelations we uncovered back in mid-July, about the tensions and dissensions the In Character series has stirred up among NPR's most distinguished journalists.

Hear! Robert Siegel clam up about how he really feels!

Be shocked! When Peter Overby raises his voice!

And awed! At what David Kestenbaum is willing to say in front of a live mic!

Also: Check out this exclusive web-only interview I conducted with Scott Simon, in which the Weekend Edition host reveals everything his corporate masters at NPR wouldn't let him say!

Seriously: Click over and listen to the piece we did for In Character, which is finally showing up on the series homepage now that various technical difficulties have been overcome. (I'm lookin' at you, Trey Graham).

You'll hear some of your favorite NPR journalists as you've never heard them before. You'll hear what Nina Totenberg thinks about what we think about whether two fictional girl detectives are too many.

And you'll discover, toward the end of the piece, which fictional figure we at the RSC think best represents the In Character ideal -- a single character who embodies everything we are as Americans.

Then click over and listen to the Reduced Shakespeare Company Podcast. It's "All Things Reduced" at ReducedShakespeare.com.

Just be sure to come back here, and tell us what you think about In Character's choices. Your comments chariot awaits ...